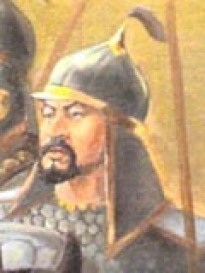 The great warrior of the Kazakh people

Many legends are composed of people Karasaj Batyr. Karasaj Altynay-uly was born in 1598 in Zhetisu, at the foot of the mountain Suyk Tobe (Zhambyl District, Almaty region). His father was a visionary Altynay. They say he once predicted hungry winter, the possibility of jute. However, Khan did not believe him. At the time, Khan's bid was on the Kok-Tube. The young man Karasaj, on the advice of his father, stole all their cattle in Balkhash steppes, rich riparian lower reaches of the rivers, Karatal. Winter was really terrible, while jute killed almost all of the people who had cattle. Karasaj in the spring drove their flocks with numerous offspring and brought before the overjoyed father. Khan "was biting his elbows", but nothing to do. Altynay Wise said to his son: "You can not leave people in the lurch. Sit down, my son, on his sledge and will drive three times in flocks, shoals of horses and camels. On the right is ours, on the other - Khan, and give it to the middle part of his kinsmen. " It happened again, as my father said, and the family did not stay in the Altyn loser ...

He grew up there warrior - Ep - Karasaj,

An avalanche of snow falling on the enemy.

On the banner, armored warriors of the tribe Shaprashty showed a wolf's head. According to an ancient legend of the Turkic-wolf saved the life of a young man to bleed to death on the battlefield. She hid him from his pursuers and went out.

Karasaj legendary warrior was known not only in the Kazakh steppe, but also far beyond its borders. More than once he came to the aid of the Kyrgyz people. Dzhungars, Chinese trembled at the mention of his name. Yesim KARASAN Khan conferred the title of "Kazakh Karasaj warrior."

As you know, the Kazakhs - a nomadic people. To feed innumerable herds of cattle and herds of horses thousandths, they had to leave for a long time sometimes relocate. And then, once the Kazakhs had gone west to the beginning. Come back - on their land settled Kalmyks. It is clear that peace will not go away. Clicked Kazakh khan cry: "Who dares to brave men of the first to enter a Kalmyk horde?" While all were thinking, rushed 17-year-old golden eagle on his black Karasaj Tulpar to the enemy. Long prepared for such a young Karasaj feat, training and accustoming himself Tulpar. The people about these horsemen say, "Attyn kulagynda oynaydy", which literally means "Playing (do exercises) for equine ear." Kalmyks were taken aback when he saw them rushing Tulpar riderless. Open mouths, they expected that the same will. Stuck on to the belly swift Tulpar Karasaj, flown up to the tent with a banner, pulled him to the shaft and ran on. Gasp, the Kalmyks in the chase. Battle ensued. Quite a few of the Kalmyk soldiers were slaughtered by the sword Karasay strong. Here Kazakhs to cry "Karasaj" rushed to the rescue. Kazakhs drove the enemy to the most Djungar gate and freed their land. Since then, the name has become a rallying cry Karasay Kazakh soldiers, and he is recognized as the most Batyr. Like his father, Karasaj warrior was endowed with a special gift. They say that accompanied him everywhere sacred leopard. When Karasaj warrior rushed at the enemy with a spear, competing with the Ravens Tulparov, rushed forward, mouth agape and baring sharp fangs, and graceful leopard. Envious souls "left in the heel" and they forget why they came, smashed into a rout.