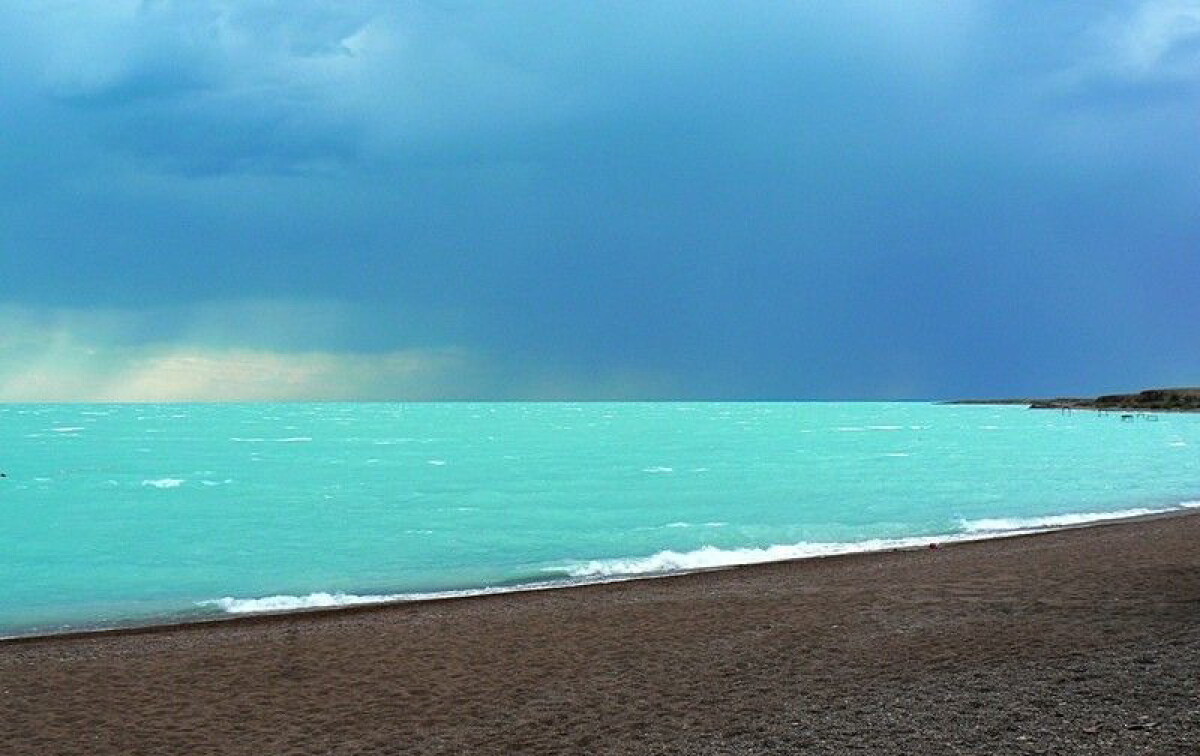 Many tourists have already visited the architectural sights of Kazakhstan, the abundance of which can be found in Astana, Almaty and other cities of the country; but its natural landscapes are not inferior to them. Steppes, deserts, meadows, mountain ranges and lakes form unique picturesque places and natural complexes.

In Kazakhstan, Balkhash Lake is the second largest reservoir in the Caspian Sea. It is located in the east of the republic. Balkhash lake serves as the main natural landmark of the country and the great heritage of the Kazakh people. Currently, many tourists are keen to see Balkhash lake when they visit Kazakhstan.

In the list of the largest lakes in the world, it occupies the fourteenth place. It is interesting that Balkhash is located on the territory of three regions of Kazakhstan - Almaty, Karaganda and Zhambyl. Its waters have an amazing fact. The lake is divided into two parts by a narrow strait, the water in which is different in chemical composition. In the west of the lake, the water is almost fresh, and in the east it is salty. This is a unique composition of water. 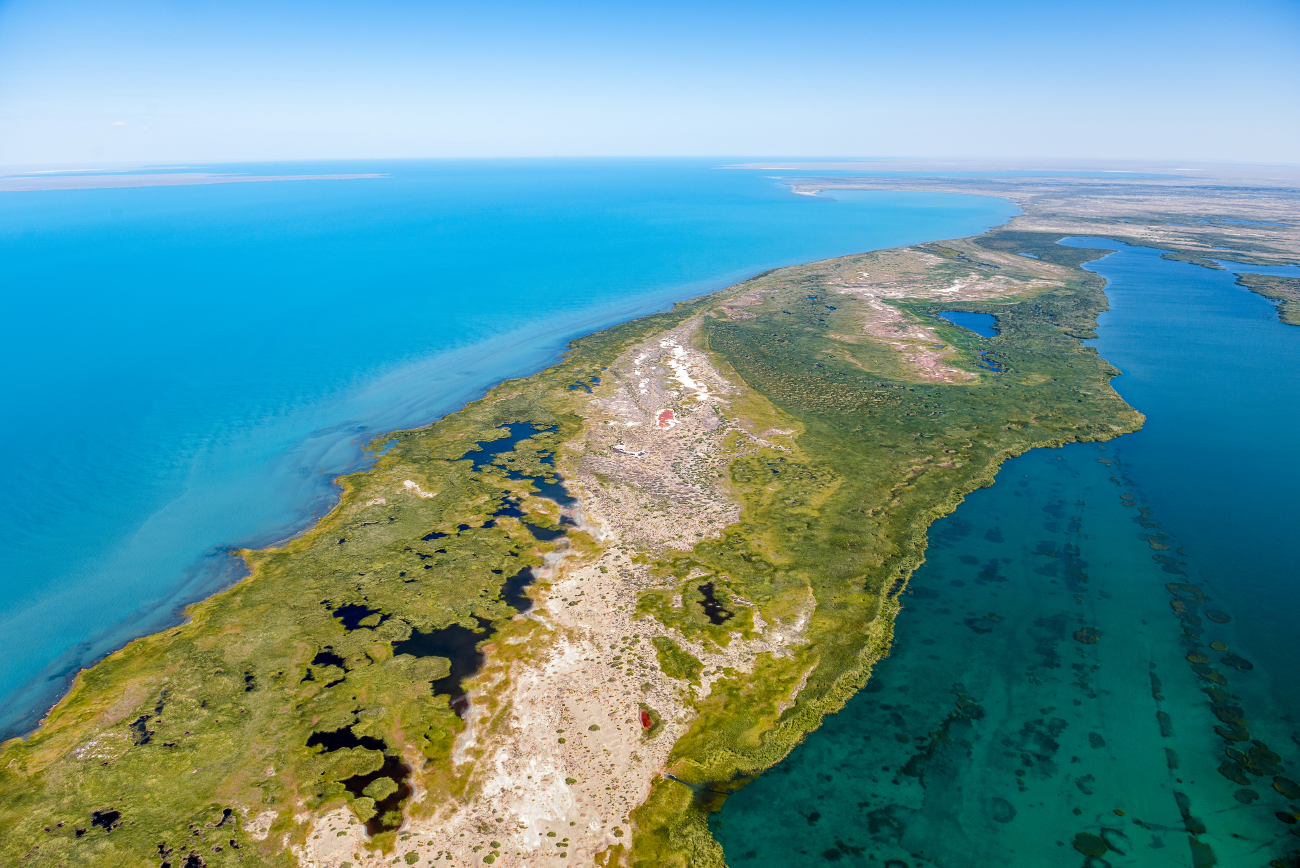 Balkhash lake is surrounded on all sides by Paleozoic folding structures: Saryarka small hills, Tarbagatai, Zhungarsky Alatau and Chu-Ili. For the first time, the famous Kazakh scientist Shokan Ualikhanov drew attention to the similarity of origin and geological history of the Balkhash and Alakol Depressions. According to his conclusion, the Alakol group of lakes are the remains of the formerly Bolshoy Balkhash. The northern shores of the lake are high and steep, as they rest in Saryarka, they are composed of Paleozoic rocks (granites, porphyrites, shales, limestones). Southeast coasts are hilly. The southern coasts are low, gently sloping, resting on the sandy plain of Saryesik-Atyrau.

The salinity of Balkhash waters is different. In the western part of Balkhash, where the Ili River flows, fresh water, and in the eastern part, salinity is 5.2%. The water level in the lake depends on the high water content of the flowing rivers and fluctuates by the seasons. The highest level of water in the lake is observed from April to July, then until the end of autumn gradually decreases.

Numerous birds nest along the shores of the lake. Here live geese, ducks, seagulls, swans and other waterfowl. In the thick thickets of reeds there are wild boars. In the 40s of the last century, there were valuable fur-bearing animals were found in Balkhash - muskrats. They multiplied rapidly, and the Balkhash settlement economy became the largest in the world. It gave the state a million income. After the construction of the Kapchagai Reservoir in 1970, the hydrological regime Or changed, and the number of animals decreased. In the delta of Ili, the total area of ​​reed thickets is about 40 thousand hectares. Here annually harvested up to 1 million tons of dry mass of reeds.

In Balkhash, there are more than 20 species of fish, 6 of them are local, inhabiting since ancient times (Iliyskaya, Balkhash blue-head, Balkhash perch, etc.), the rest are moved from other reservoirs (barbel, thorn, pike-perch). Fishing is sazan, pike perch, balkhash perch, etc. In connection with the construction of the Kapchagai reservoir on the Ili River, it was possible to irrigate 450,000 hectares of new land-the Akdal and Chengyildy massifs and the Karatal rice massif were developed. The Big Almaty channel also used part of the Balkhash water resources. All this led to a change in the hydrological regime of the lake: the Balkhash level decreased by 2 m, the salinity of the water increased, the Ili delta decreased, and the use of chemical fertilizers affected the water quality. Balkhash is navigable. The main piers are Balkhash, Saryshagan, Burlitobe. The economic importance of the lake in recent years has increased significantly.

The word "Balkhash" came out from the word "balkas", which from Kazakh, Tatar and Altai means "hummocks on the swamp", "swampy terrain covered with hummocks". According to the legend about the origin of the lake, the wealthy sorcerer of Balkhash had a beautiful daughter, Ili. When the time came for her to marry, Balkhash announced that he would give Or only for the strongest, most handsome and rich. Among the arriving bridegrooms were two sons of a Chinese emperor with caravans, littered with expensive goods; the sons of the Mongol khan with horses and silver; and young Bukharan merchants with ivory and carpets. But there was among the aspirants and the poor shepherd Karatal, in whom the girl immediately fell in love. 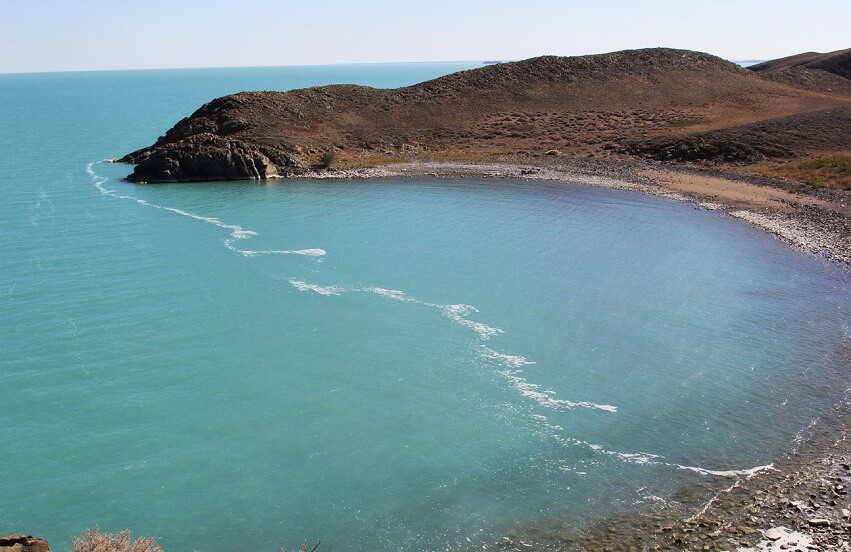 After the competitions, on which Karatal won, Balkhash drove him out. But at night Or ran away from home and galloped off with a chosen one from her father. Balkhash, learning about the escape of his daughter, cast a spell on the young, and they turned into two rivers that swiftly carry their waters from the mountains. And in order that these rivers never joined, Balkhash fell between them and became a lake.

The first data on Balkhash lake were found in Chinese written sources. This is explained by the fact that the Chinese were the only developed civilization that lives close by and has the opportunity to get to know this locality. The region west of the Great Wall of China, they called "Si-Yu", which means "Western edge". About its existence, they already knew in 126 BC. By 607, the Chinese had already drawn up maps of 44 countries that were at that time in Central Asia. But these descriptions have not survived to the present day.

According to some reports, Balkhash lake was known to the Chinese under the name "Sea Hai", ie, the "Western Sea". Under this name, it is noted on the atlas of 1855. In the same period, the lake had another name given to it by the Kalmyks and Jungars "Balkhash-Nor" (" Balkhash lake"). And the eastern peoples, such as the Turks and Mongols, who denoted all geographical objects to the west of their homes with white, called it Ak-Dengiz (The White Sea). And after the borders of their countries moved to the west, the lake became "blue" (eastern) - "Kukcha-Dengiz". The Kazakhs called the lake "Tengiz", which means "Sea". In the 18th century, the lake was marked on several maps: on the map of 1716, which were published by the Swedish officer Renat, and on the Russian map compiled by Captain Stralenberg in 1730. 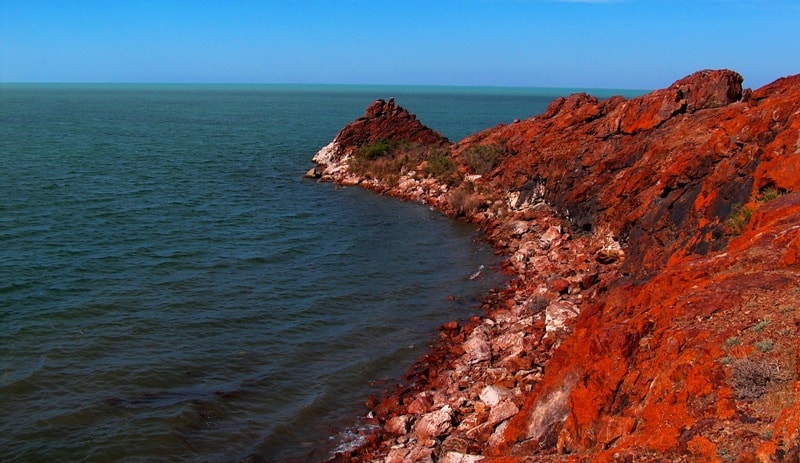 During the reign of the Chinese Qing dynasty (1644-1911), the lake stretched along the northern border of the Chinese state. In 1864, in accordance with the Russian-Chinese agreement on the north-western border, the Balkhash and its adjoining territories withdrew to the Russian Empire. In 1903-1904, the lake and its adjoining territories were studied by the expedition of L.S. Berg. As a result, it was established that Balkhash is beyond the boundaries of the Aral-Caspian basin, and that they have never united in their geological past. It is interesting that Berg, studying the pond, came to the fact that the lake does not decrease and the water in it is fresh. He also noted that there was a period when Balkhash was completely dry, but then it was filled with water again, and since that time its water had not yet become salty.

At present, Balkhash is attracting everyone's attention with the find that the helicopter pilots have identified. Doing a flight over the isthmus, which divides the lake into a salty and fresh water area, they discovered the outline of protective shafts with watchtowers. There was another confirmation that a thousand years ago at the site of the present lake there were two autonomous. Today, on this isthmus, the lake can be waded. Found on the bottom of the city was the center of the Great Silk Road in Saryarka. 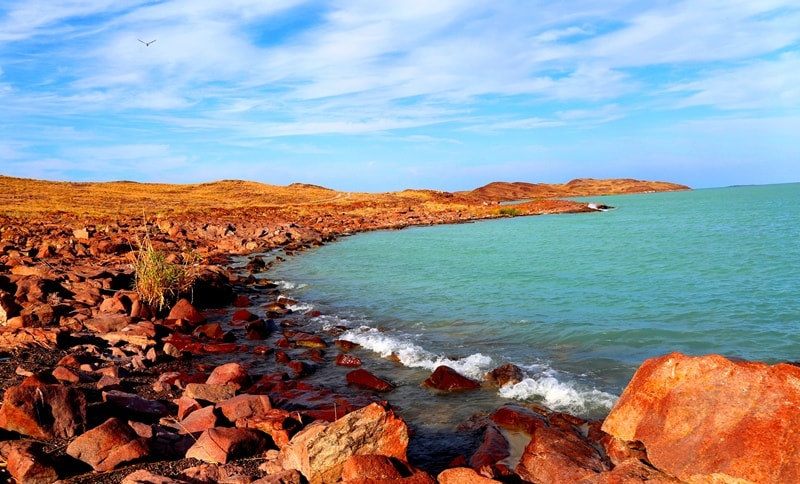 The climate of the surroundings of Balkhash is considered deserted. The average temperature in July here is +30 C, in January - about -14 C. The dry climate, wind and temperature lead to a high evaporation rate of water - in cool years the norm is 950 mm, and in arid reaches up to 1200 mm. Balkhash is a warm, well-heated lake. The water temperature on its surface ranges from 0 C in December to +28 C in July. The average annual temperature of the western part of the lake is +10 C, the eastern one - +9 C. Every year the lake freezes, and ice usually is there from November to early April, moreover, the glaciation in the east is delayed by 10-15 days.

The lake belongs to the habitat of large cormorants, pheasants, chirch, white herons and golden eagles. Of the 120 species of birds, 12 are listed in the Red Book, including pink and curly pelicans, a swan swan, a spoonbill and a white-tailed eagle. Balkhash has a rich fauna, but since the 1970s, water quality has deteriorated, which has caused a decline in the species diversity of fauna in the lake. Before that, it had about 20 species of fish. Now fishing in Pribalkhash is possible for such species of fish as carp, catfish, pike perch, asp, roach, perch, crucian, bream and others. On the shores of the lake you can find such plants as turanga, willow, from cereals - southern cattail, reed ordinary and several types of reeds. In the thickets of reeds you can see wild boars.

During holidays, there are all conditions for an excellent rest, as clean water is suitable for swimming, and you can sunbathe on the beach. The area is also unique for fishing and hunting. Arriving at Balkhash lake travelers discover for themselves its charming nature, an unusual animal and plant world and other beauties. Since this area is considered an excellent recreational center, it will provide positive energy.

Recreation bases on the lake provide an opportunity to use natural healing factors for a person's recovery. Special features of the lake salt and mud, which are found in the springs near the pond. Bathing in clean water and bright sun promotes recreation. A recreation industry develops around the lake on coastal bases. The surroundings of the lake are divided into several dozen zones, each of which has hostels, holiday homes and hotels. The tourist cluster has catamarans, scooters, boats, boats, water skis, tennis tables, sports and playgrounds. The banks and buildings are landscaped, there are ballrooms, bars, restaurants, health services are provided. Almost in any sanatorium or hotel guests are accepted with children, for whom children's rooms and animators work. 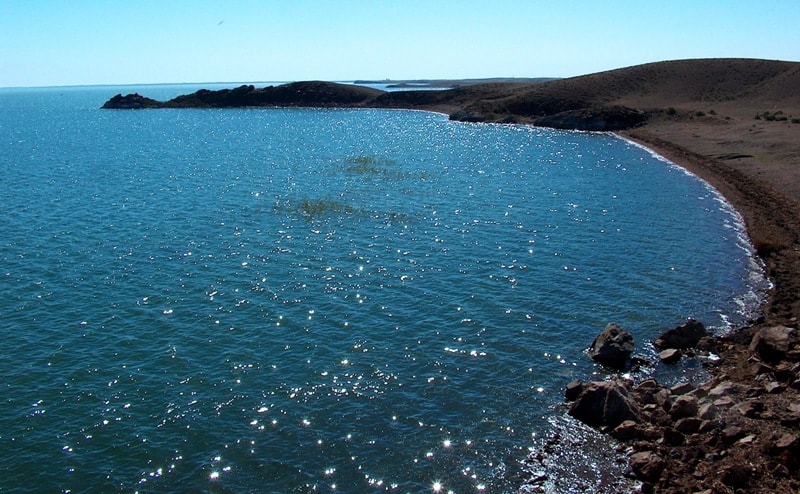 With a fishing rod on the shore of the lake will be held high-quality rest, because the situation here is calm and peaceful. Balkhash is a large deposit, where even novice anglers will not be left without fish. For the sake of fishing here come in the spring, summer and early autumn. In April, the pre-spawning process of the famous Balkhash vobla takes place. Usually the water warms up a little after the winter, you can already catch carp and carp. So, fishing on Balkhash lake will be a real pleasure for lovers of this lesson, and for those who just want to relax in the bosom of nature.

Also, great opportunities are provided for hunters. Here you can trade on a duck, wolves, foxes, hares, geese, pheasants, and a special pleasure will be given to hunting for mallards and coots. Also an interesting activity is underwater hunting. In order to participate in this event there is no need for professional equipment, you only need to take an underwater gun, masks and tubes. For many submariners, this place is traditional for a vacation. The list of services and specialization of tourist centers, hotels, health resorts can differ. There are places in which only fishermen are happy, but there is where only beach rest is possible. Therefore, before the trip, it is advisable to get acquainted with the full list of basic and additional services, and choose the place of rest that meets all the requirements.

Balkhash lake is an amazing reservoir in Kazakhstan. His visit will bring a lot of impressions and will energize every holidaymaker. A variety of leisure options allow you to organize pastime according to your preferences.