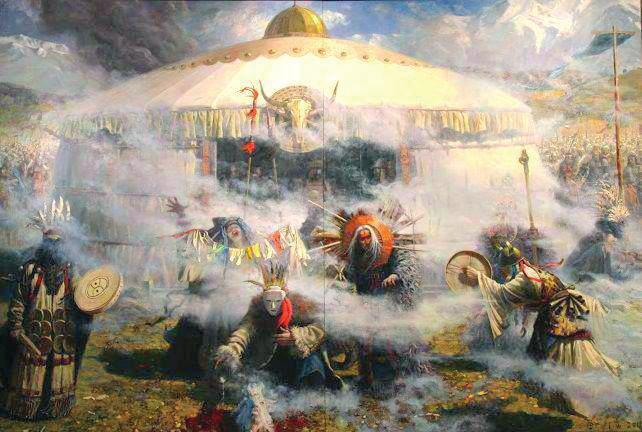 This article draws upon with the issue of continuity and identity in the concept of the nomadic civilization of the Turkic-Mongolian people through the lens of Tengrism. For many centuries, the Turkic civilization had developed within a single ethnic culture and had a traditional type of society and integrity in the self-identification of the people. One of the possible reasons for this unity was, in fact, Tengrism - a specific form of social self-organization, which explains the true meaning of social and natural existence in the religious and philosophical understanding.

The centuries-old history of the Kazakh people, for example, has adhered to a unique worldview system. The historical nature of the worldview is expressed in its basic forms - mythology, religion, and philosophy. When considering the mythological and religious aspect and highlighting its objective and spiritual activities, it is imperative to pay attention to the integrating factors of the existence of nomadic culture.

Due to certain reasons, the culture of nomadic societies was formed as a militant civilization. Most researchers express different points of view in regards to the emergence of this type of civilization.

A prominent scholar Kradina, for example, in her article entitled "Nomads in the world-historical process" mentions about the aspects of the development of the nomadic society as such: "The need for the unification of nomads arises only in the case of wars for the resources of existence, the organization of plundering of farmers or expansion into their territory, in establishing control over trade routes. In this situation, the folding of a complex political organization of nomads in the form of nomadic empires is both a product of integration and a consequence of the conflict (between nomads and farmers)”.

However, it must be mentioned that for a successful waging of wars, a powerful military organization was needed. Researchers managed to notice an interesting circumstance that the degree of centralization of nomads was directly proportional to the magnitude of the neighbouring agricultural civilization. That is why the nomads of North Africa and the Near East united in tribal confederations or chiefdoms in order to trade with or attack oases; the nomads of the Eastern European steppes, living on the outskirts of ancient states, Byzantium and Rus, created "quasi-imperial" state-like structures, and in Central Asia, for example, such a means of adaptation had become a nomadic empire.

Another model of political genesis, applicable to the origin of the steppe empires, is "commercial". Its main premise is that foreign trade exchange with the subsequent redistribution of rare and prestigious goods among subjects is an important component of the power of the leaders and rulers of early states. The stability of the steppe empires directly depended on the ability of the highest authority to organize the receipt of silk, agricultural products, handicrafts and exquisite jewellery from sedentary territories. Since these products could not be produced in a cattle-breeding farm, obtaining it by force or extortion was the primary responsibility of the ruler of the nomadic society. As the only mediator between China and the Steppe, the ruler of the nomadic society had the opportunity to control the redistribution of the extraction received from China, and thereby he strengthened his own power. This made it possible to maintain an empire that could not exist on the basis of an extensive pastoral economy.

All this predetermined the dual nature of the "steppe empires". Outwardly, they looked despotic, conquering state-like societies, since they were created to seize the surplus product from outside the Steppe. But from within, the nomadic empires remained based on tribal links without establishing taxation and exploitation of pastoralists. The power of the ruler of the steppe society, as a rule, was not based on the possibility of applying legitimate violence, but on his ability to organize military campaigns and redistribute revenues from trade, tribute and raids to neighbouring countries" [1].

The self-identification of the Kazakhs was built on the basis of a rigid value-based antithetical "us-them", where "us" - is the universal norm and the model, whereas "them" - any and all settled agricultural people and cultures is a paradigmatic set of anomalies. The attitude of the nomads to the culture and way of life of settled agricultural peoples was selectively critical, if not frankly nihilistic. In one of the legends about the origin of the three Kazakh zhuzes, recorded by Mashhur Zhussup Kopeev, the jigits sent to conquer new lands were so responsive to the envoys of the khan on the command given to them to return: "Do not tell us about the return and do not come back yourself. Why should you go back to the region where the horses grow old at five, and the jigits at twenty-five, where only the chicken is known from the birds, and from the lessons - plucking the grass, where the men are like nags, and women - on their minds, where they change Malakhai to the skull-cap, where the knife is changed to a spoon, where there is no other joy like serving Sarts, carrying salt in the summer, and wood and coal in the summer, and serving Sarts, whose vaunted upbringing consists only in eating a wheat cake and drinking with millet soup, at best, being content with the thigh of a tiny quail" [2].

Identification, or awareness of oneself with one's own language, culture, ethnos, is perhaps one of the pressing issues of modern reality. With this approach, there are two poles: on the one hand – we are on our own, on the other hand – they are others - strangers. These poles allow us to understand how a certain group of people was aware of themselves as "their own" as opposed to those "strangers", in other words, the question arises - what are the criteria for determining ethnicity [3, p.102]. Gumilyov argues that "there is not a single real sign for the definition of an ethnos applicable to all cases known to us: language, origin, customs, material culture, ideology are sometimes the defining moments, and sometimes not: "We are so-and-so, and all the others are different" [3, p. 103]. In the opposition "own" and "alien" in the ancient Turkic picture of the world, "one's own" and "one's own" are peculiarly manifested. Because of the campaigns and battles, the ethnic composition of the ancient Turkic Kaganate varies all the time, the boundaries of "our own" are very amorphous, so many other closely related tribes Kangla, Segiz-Oguzes, Kiyats, etc. belong to "ours" [3, p. 111].

Despite the feuds inside tribes, the Turks tried to find a common language with their fellow tribesmen, and the establishment of blood ties was used for peaceful relations.

"Confrontation of the Turks with the Tabgacs could be explained not only by territorial claims, but as Gumilyov believes, the war with China was not just a battle between the two states, but it was the battle of cultures – between two different worldviews and attitudes. The Great Steppe by the manifesto declared its right not to be part of China, but to be only itself, independent "[3, p. 109].

In that case, what constitutes the paradigm of civilizational existence? Religion? Values? Culture? Economic structure? Geographical environment? The way of thinking?

The willingness to take any one of the components as a basis reflects a lack of understanding of the phenomenon of the civilizational genotype. Thus, Arthur Toynbee built civilizations around the religious core and identified them according to religious affiliation. Is it correct? Yes - in the specific context of a specific study - but it is quite clear that it is incomplete. In the Eurasian context, civilization types are correlated with geopolitical zones. Braudel revealed the category of civilization through the definition of "world-economy", emphasizing the economic dimension of the phenomenon of civilizations. In fact, it was not about civilizations as such, but about variations of religious, economic, geopolitical, and axiological systems [4, p. 213].

The nomadic mentality is the result of many factors. Syncretism and multi-components as the main attributes of the outlook were due to the geographical location, special way of life and the diversity of ethnocultural communities that existed on the territory of Kazakhstan. Among the diversity of ideological, cultural substrate, which determined the content, the fundamental values and orientations of the nomadic consciousness. Turkic beliefs and myths represent the nomadic culture and mentality in a very clear and full fashion.  This is due both to the long history of the Turkic tribes and peoples in Central Asia and to the ability to assimilate the existing worldview universals of nomads within the framework of Turkic worldview syncretism [5].

If one touches upon the issue of history, it is known that one of the oldest worldview systems was Tengrism. In the course of historical development, the Turkic-Mongolian people had a dual religious-worldview system ("heaven" - "land") as a specific form of social self-organization. From the original cosmic chaos, a certain order was born; a picture of religious-ideological orderliness was formed, as well as the orderliness of social and natural was being associated with it. According to Abayev and Feldman, the most important criteria of civilization in general, including the "nomadic", is the presence of a qualitatively specific spirituality that goes beyond its primitiveness (and then ethnicity), acquiring in the process of its development an institutionalized interethnic, tribal or supranational character inherent in such world religions, as Tengrism, which, even in ancient times has spread throughout the central part of Eurasia [6, p. 47].

"Tengrism as a variety of religious ideas includes the following key points: the idea of monotheism, when Tengri is viewed as the only God, the worship of Heaven and natural phenomena as a manifestation of natural religion, the idea of Tengri's transcendence as a comprehensive impersonal beginning, the all-pervading impersonal force of categorical abstractions of the conception of the universe, open worldview as the realization of social refraction of existence," says Ayupov [7].

In the traditional societies of the Turkic-Mongolian people during the pre-Buddhist period, the whole aggregate of values, value orientations, orientations of social activity, stereotypes and vectors of behaviour, one way or another, was associated with the will and control functions of the "Spiritual Sky". Tengrism, it should be acknowledged, even at the stage of the emergence and development of civilization in general, became the core of the spiritual and cultural tradition that ensures the effective functioning of this kind of social attractor, which does not exclude the existence of this system-dynamic integrity [6, p. 58].

In spirituality, aesthetic, ethical, theoretical forms are associated along with a semantic dimension of human life. The composition of the traditional nomadic worldview is limited to the fundamental moral and moral values that have developed throughout the long ethnic and cultural genesis. Performing the functions of social regulators, the norms of traditional behavior and communication ensured the viability, stable functioning of the society. These basic norms and values are passed from generation to generation and assimilated at the level of unconscious stereotypes, patterns, behavioural landmarks, forming a special store of thinking and psyche - the unique original mentality of the ethnic group.

The core of the social relations of nomads and the basic value of a worldview is a kin-generational principle, which is the fundamental principle of self-identification of the individual with both the community and the natural habitat, primarily from the territories as a continuation of one's natural being [8].