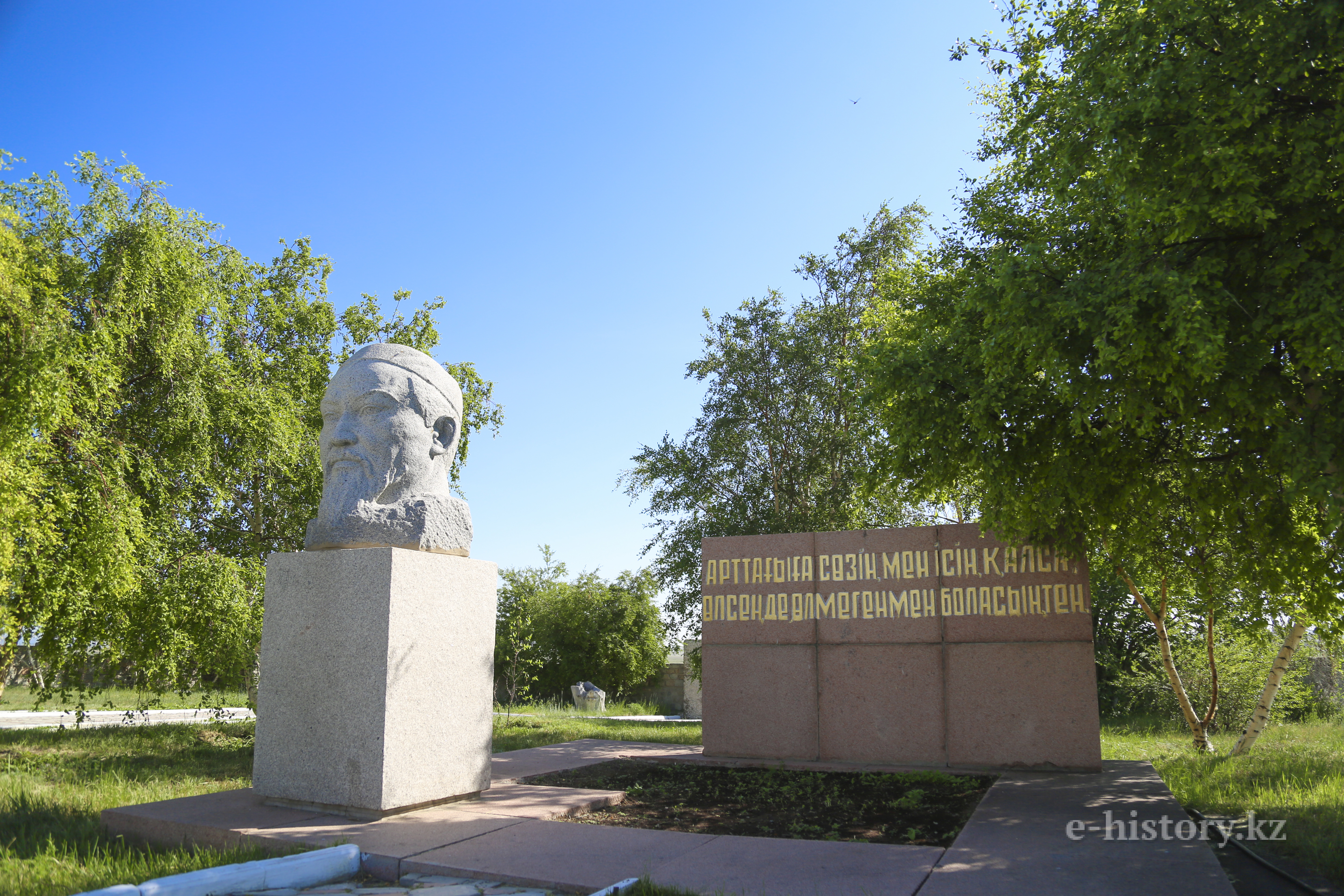 The house-museum of the great poet of the Kazakh people, the great thinker Abay Qunanbay is located 180 kilometers from the city of Semey in the village of Zhidebay in the Abay district

Shyngystau, located on the bank of the river Karauyl, the birthplace of Abay, was once a small hill, not far from the district center of Karauyl.

In Zhidebay there is a wintering and a house of the great poet. Tourists and guests, who visited this place, personally see the valuable relics of the poet's epoch and learn a lot of historical information.

The fertile land of Zhidebay passed from Qunanbay to his son Ospan. Then, after the death of Ospan, the land passed into the possession of Abay. 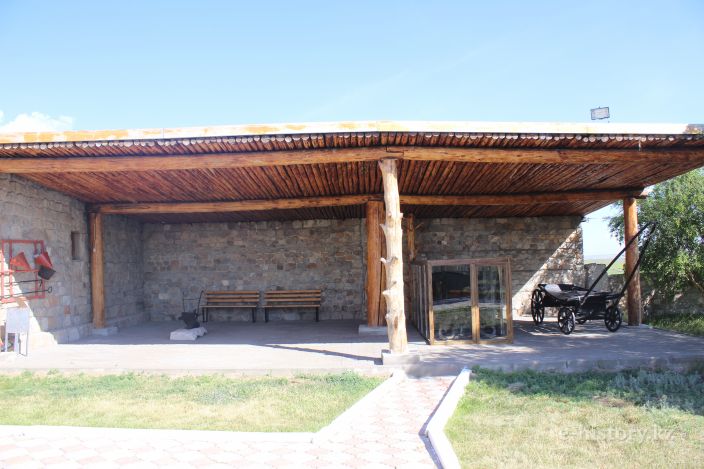 "The famous Zhidebay and Lake Kolkaynar, the reserve where Abay's childhood passed, occupied a high place in his heart. This is the village of his grandmother Zere and mother Ulzhan. Abay at the venerable age, lived in Zhidebay for 30 years, many of his marvelous works were born here. Zhidebay was named Mecca of Kazakh poetry. Zhidebay, with its lush grass, abundant water, convenient for livestock, was near Shyngystau, convenient place, from where it is easy to get to high mountain pastures," wrote the scientist and Abay studier Assan Omarov in his works.

As is known, the mother of Qunanbay - Zere, and his two wives - Ulzhan and Aigyz, spent the winter in Zhidebay. Abay grew up in the caring hands of these mothers. 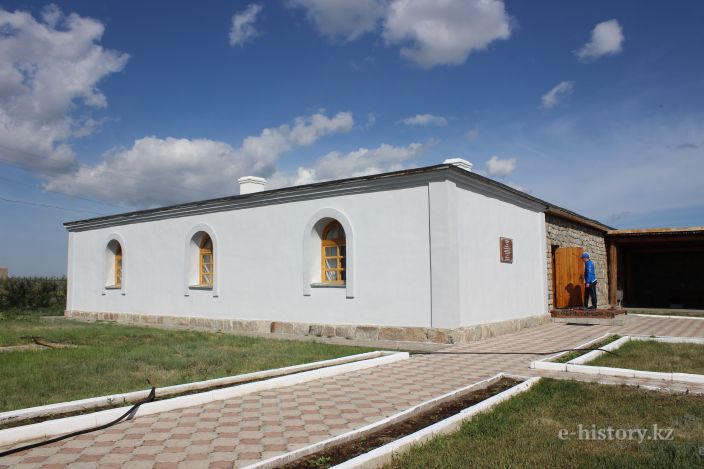 The complex of the house-museum occupies a large area. In the middle is wintering. Wintering consists of 5 rooms and 2 corridors. Right at the entrance to the museum visitors are met by a bronze sculpture of Abay. 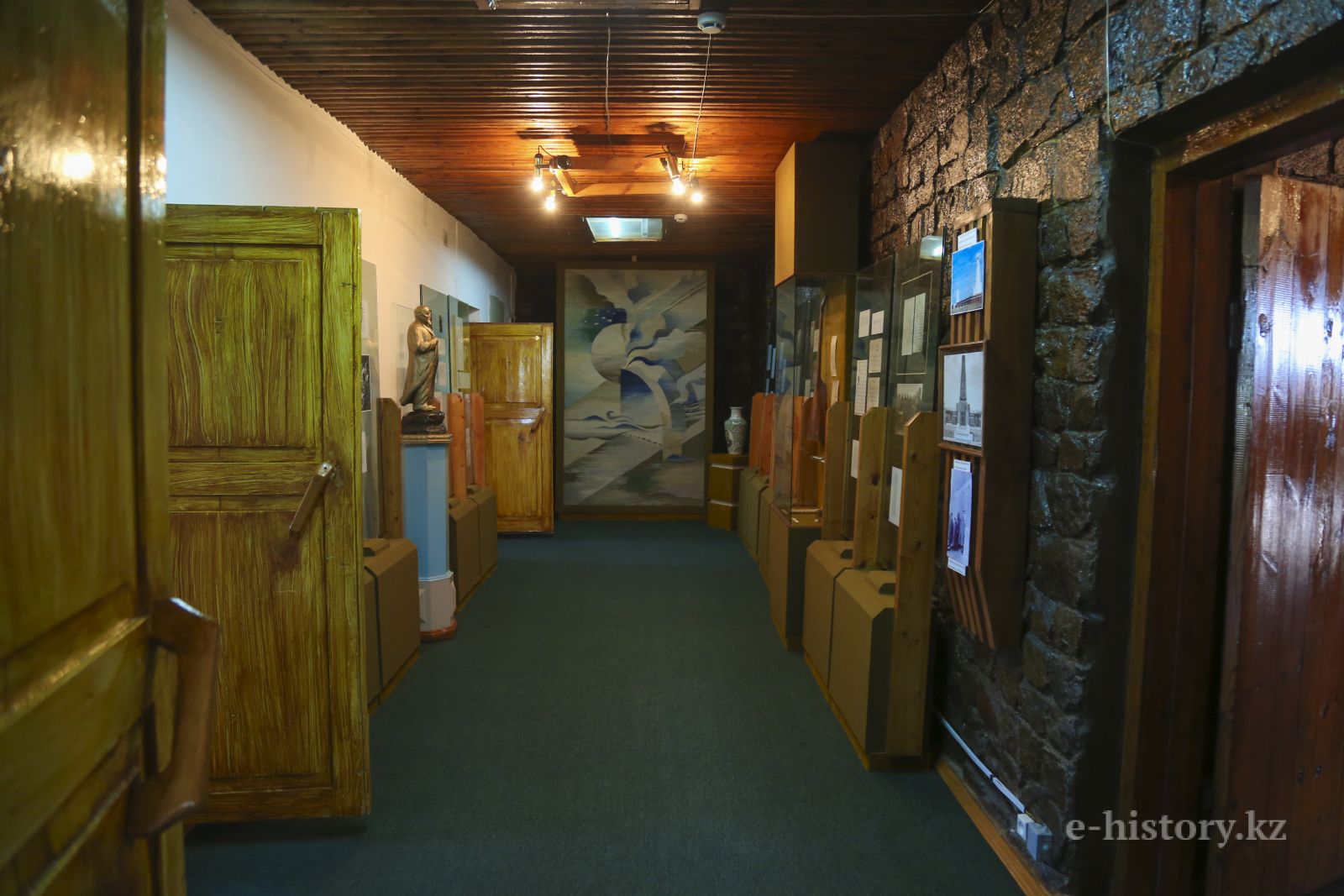 On the wall of the front room there is Abay's genealogy and photo documents that characterize the era of the poet. Also, a familiarization stand about the history of wintering was established. 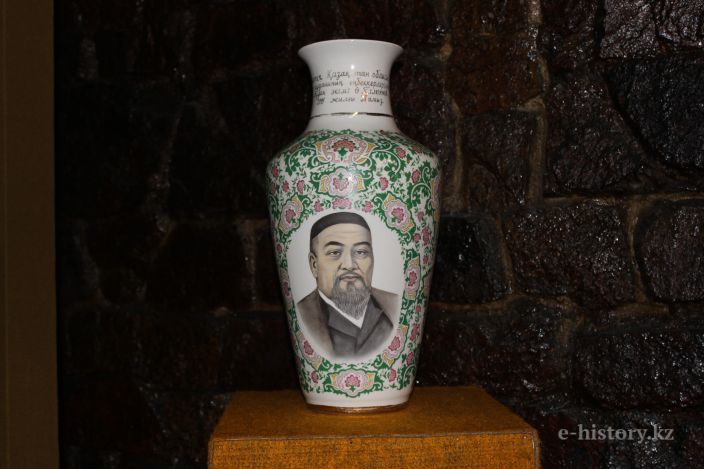 In the following exposition halls, documents were presented about the poet's children, who continued his poetic tradition and the works of his spiritual disciples, who brought his legacy to his descendants. The next room is devoted to the relationship between Abay and his Russian friends, exiled to Semey. After getting to know them, Abay began to study Russian and Western European art and historical literature. About their arrival in the village of Abay in his memoirs tells nephew of Abay. Together with the exile intelligentsia, Abay studied local lore and enlightenment. He made a huge contribution to the search, collection and systematization of ethnographic exhibits for the local history museum, helped in the study of life, history and traditions of Kazakhs. 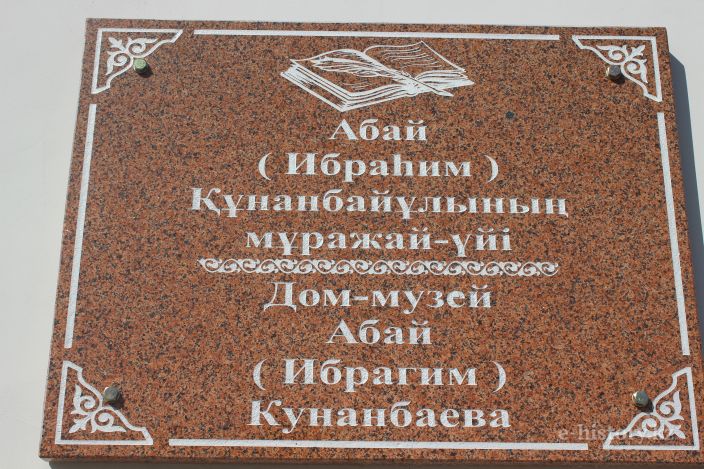 The separate hall is fully devoted to the science of "Abay Studies", here statements are collected about the poet's work, and most of the exposition of this section is devoted to the fundamental works of Mukhtar Auezov.

From the first corridor, the visitor enters the dining room. It is spacious, the windows face east. On the left side of the entrance there is an oven with a domed top. It has two cauldrons installed. One large, it cooked meat, another smaller - for light meals. Both cauldrons were closed with wooden covers. The domed top of the oven protected the room from steam. 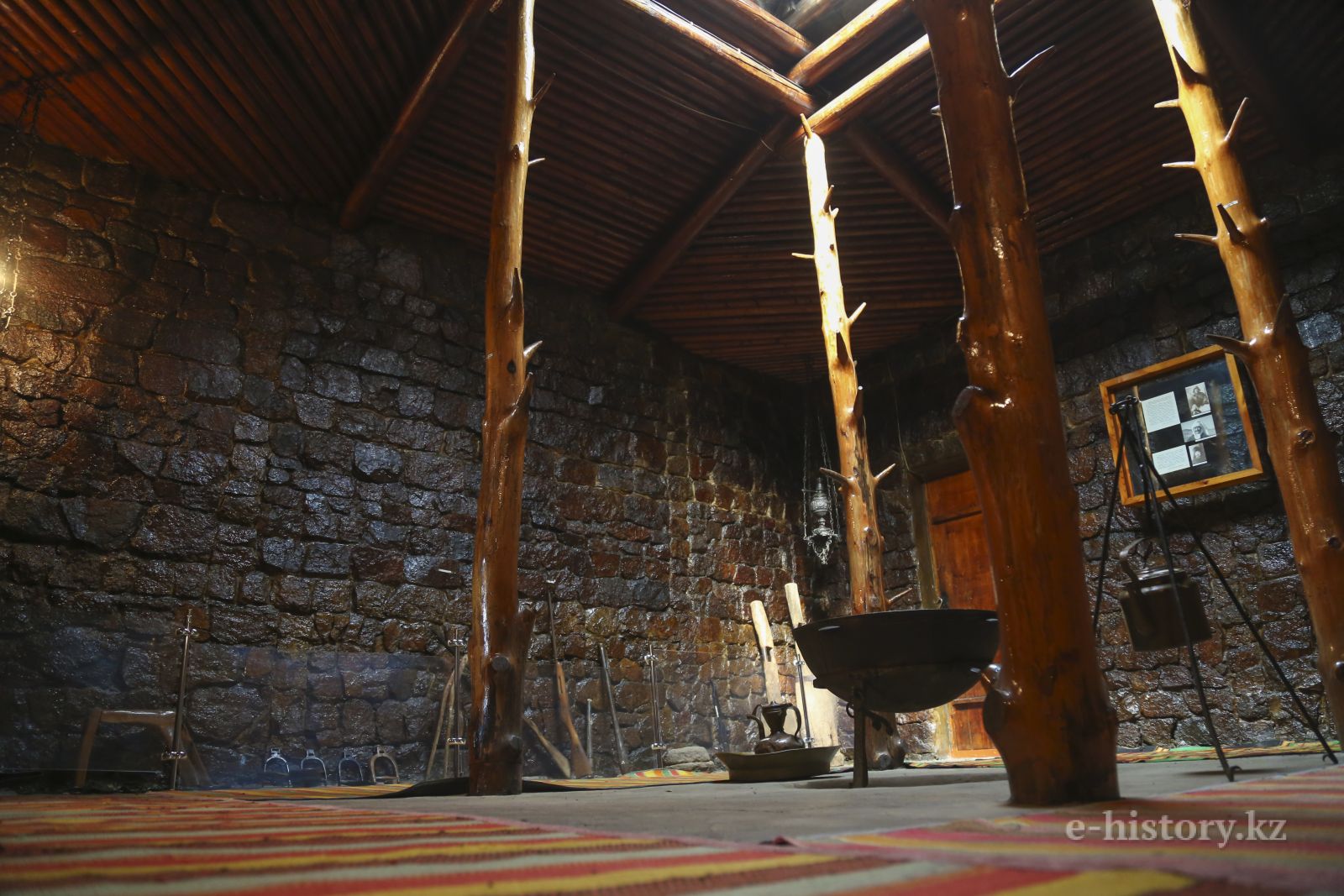 Among household utensils - wooden utensils: astau - a dish for kurt, a koumiss set. The room has furniture: cabinets for dishes, kebezhe - storage box for food, asadal - a cabinet on the high legs for storing food. All the furniture is made of wood by local craftsmen. On the right side of the window is a wooden bed, the front side of which is encrusted with bone. Above the bed is an old carpet of black velvet with red appliqués. He belonged to Abay's wife - Dilda.

From the second corridor, the visitor enters the living room. It is not large in size, but very cozy. The floor here is covered with carpets and on the wall - a pile carpet. 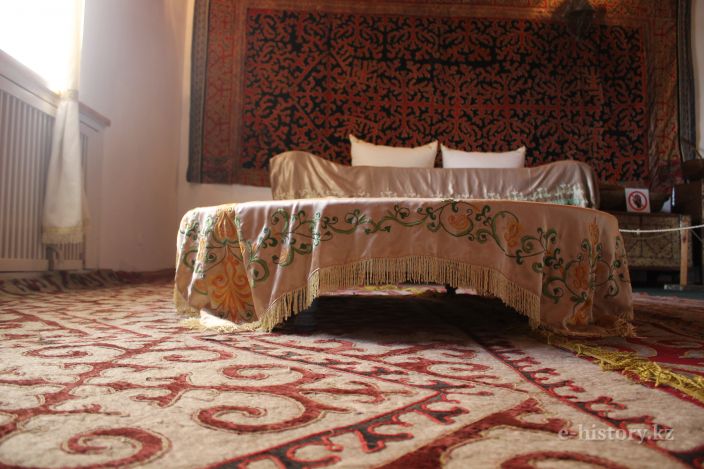 Among the exhibits you can see an ancient musical instrument - kobyz. 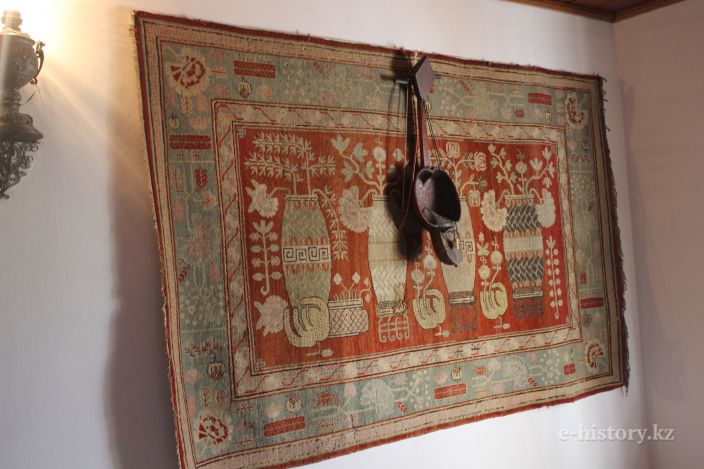 Here the poet worked, read, wrote poetry. The room has kept that creative atmosphere. In the center of the room is a low round table covered with embroidered tablecloth. On the table - a pocket watch, snuffbox, ink device, goose feather. It seems that the ink on Abay's manuscript "A few words about the origin of the Kazakhs" has not dried up yet. 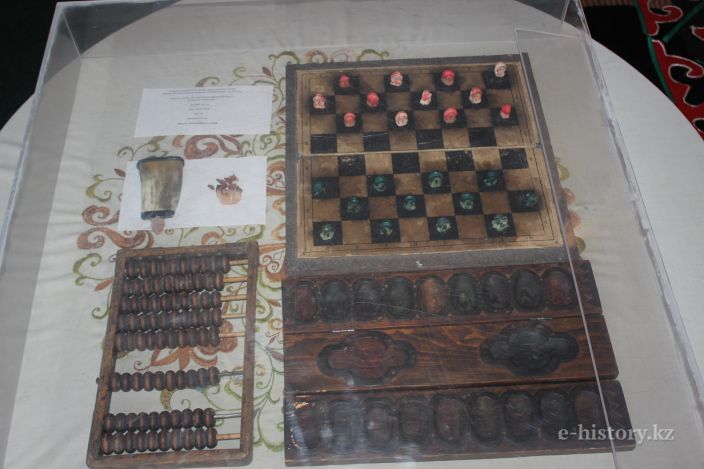 Here, next to the manuscript - the national game togyz kumalak.

Traditional Kazakh furniture in this room is combined with European furniture: a wardrobe, a desk, an armchair, a mirror, a wall clock, in the closet - favorite books. The works of oriental poets coexist with the works of Russian classics, encyclopedias. On the desk - a table lamp, checks, chess and books - companions of his entire creative life.

On the left, on the wall, there is takiya - a head-dress of Qunanbay, brought from Arabia, during a pilgrimage to Mecca. It was transferred to the museum by Abay's great-grandson. On the walls there are photos: Abay with his sons and his brother Ospan. There is also a Kazakh wooden bed with decoration. In the middle - a round table on low legs, covered with a tablecloth. On the table there is a koumiss set decorated with silver. 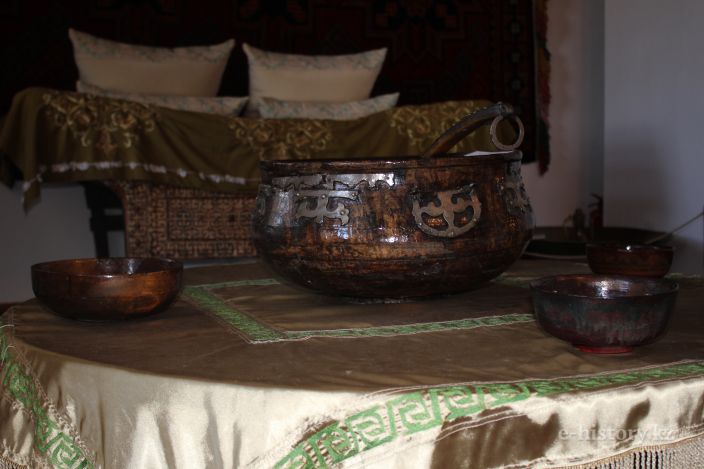 Near the stove is a large copper basin, a kumgan, a towel with embroidered edges. In the corner - a three-barrel rifle (hunting gun of the central battle Abay was awarded by the West Siberian Governor-General Baron Taube in 1890 "For diligent service and special merits"). 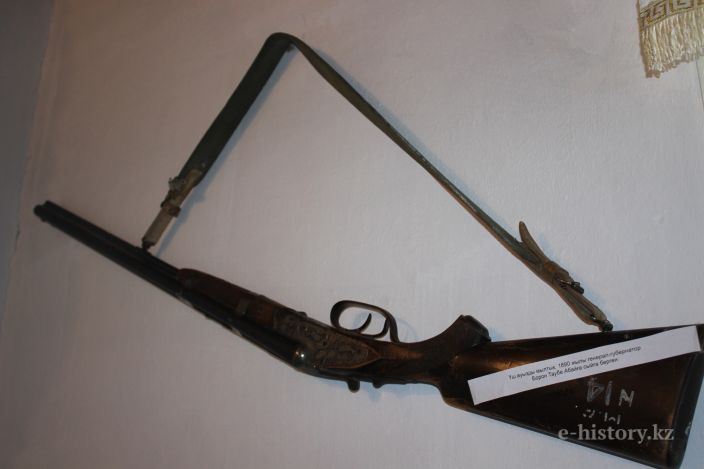 Yerkezhan was the wife of Ospan, Abay's brother. After the death of Ospan, according to the Kazakh custom, Abay was forced to marry Yerkezhan. 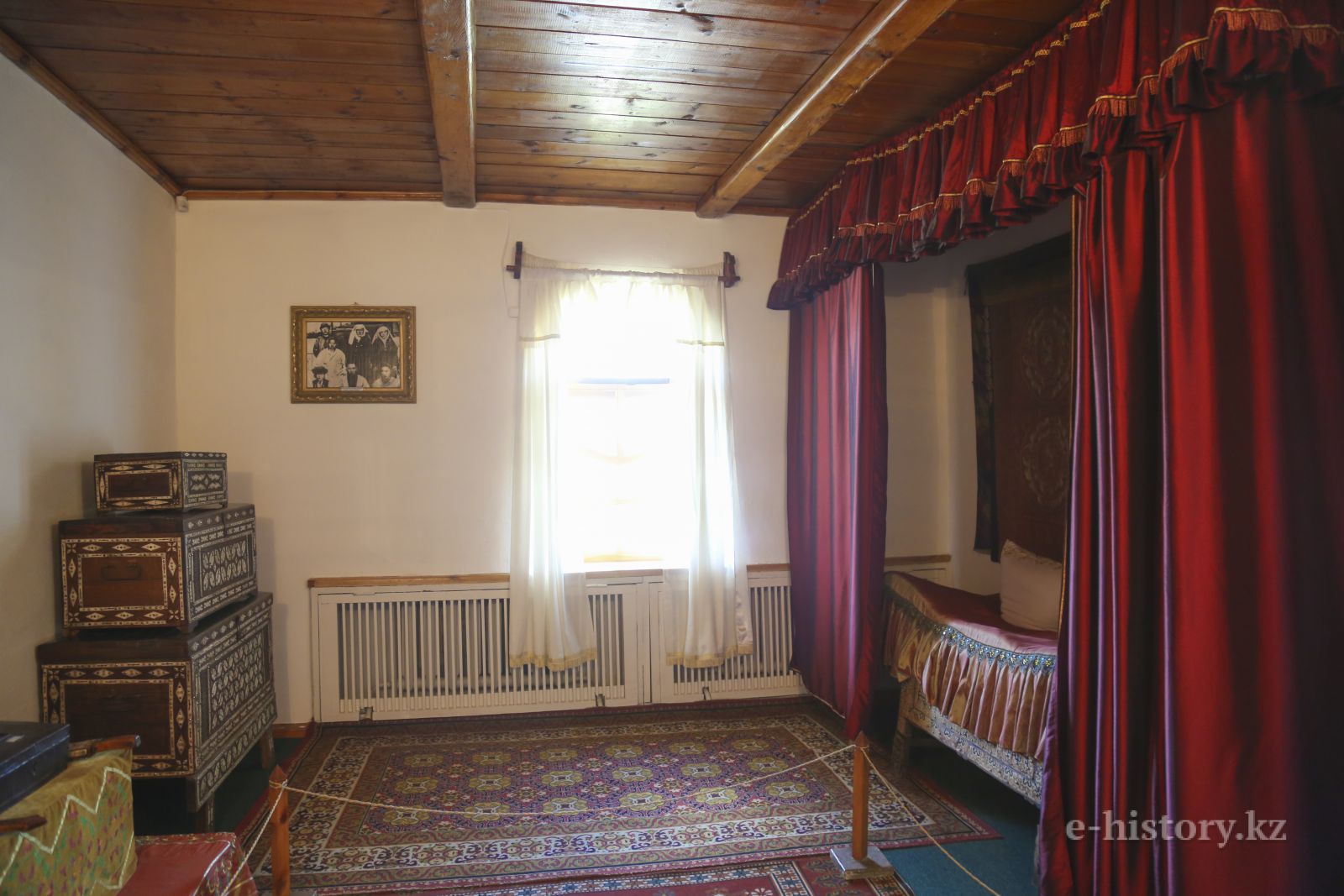 As Yerkezhan spent her whole life in Zhidebay, most of the surviving items belong to her. Female jewelry is presented in a separate window. In the right corner is a wooden bed with decoration. 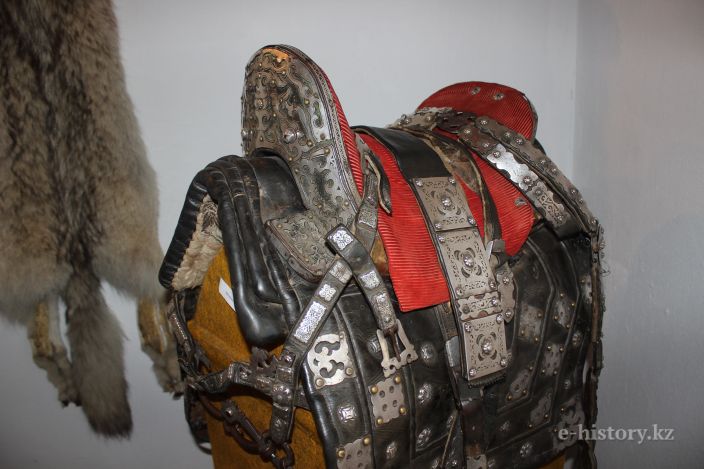 Author: Altynbek Khumarzakh
Use of materials for publication, commercial use, or distribution requires written or oral permission from the Board of Editors or the author. Hyperlink to Qazaqstan tarihy portal is necessary. All rights reserved by the Law RK “On author’s rights and related rights”. To request authorization email to mail@e-history.kz or call to 8 (7172) 57 60 13 (in - 1163)
Қазақша Русский English
MOST READ
Month Year
Recorded history of Kazakhstan. Part 2
Heroic mothers of the great steppe
How had the World War II been started?
Philosophy of the Emblem
14 monuments at Tekturmas
The rural akims: the country's hope is in the elections
Kazakh historical drama Tomiris premiered in Istanbul
Stolypin about the worries and hopes of immigrants to the Kazakh steppes
ALASH IDEA IS THE PROTECTION OF KAZAKH STATEHOOD
A tireless explorer of the Kazakh land
SWITCHING TO THE LATIN ALPHABET – UNITE ALL KAZAKH PEOPLE
Kunaev Dinmukhamed Akhmedovich
People who eat horses will kill you
Materials on theme
Traditional life in the steppe: national games of Kazakh people
Bayanaul – a cradle of talents!
What do we know about the staff of Saint Beket-Ata?
MURAK - KHAN'S HEADDRESS