Sauran as the part of cultural heritage RK 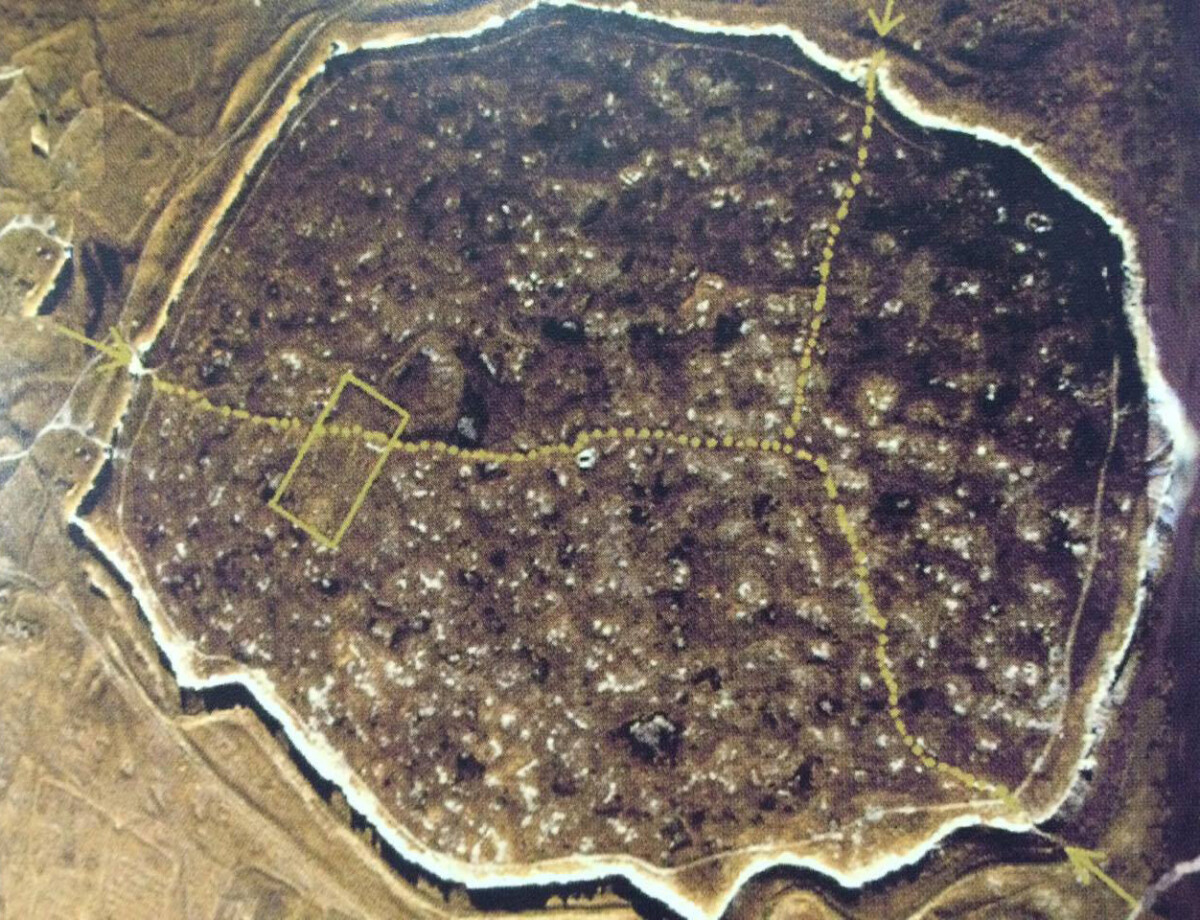 Sauran was the capital center of Ak-Orda under the Djuchids in early XIV c. In this work it is regarded from the archeological point of view in the ancient time and today

From the history of study of site

Archeological study of Sauran site started more than one hundred years ago, it is mentioned in the works of P.I.Lerkh, in the travelling notes of P.I.Pashino in the reports of A.I.Fedchenko. All of them write about good safety of site, its walls on the ruins of medrese.

The first acrheolgical researchers of town had been carried out at the end of the 40-es of our century by South Kazakhstan archeological expedition, headed by A.N.Bernshtam. The visual plan of monument was made and dating was done on the basis of the received material.

One of the discussion problems in the history of town was the problem on its location. In case the location of Sauran of the XIII (XIV) – XVIII cc. do not have any doubts and the same name town corresponds to it, location of premongol town was not established. The reason is that in Sauran site there are no layers with materials earlier that the XIII-XIV cc., and it existed up to the XVIII c. So, Ageeva E.I. and Patsevich G.I. offered to look for it on the left bank of Syrdaria.

Firstly, K.M.Baipakov identified premongol Sauran with the Mairam-tobe, proving his proposal by the chronology of site, having the cultural layers from the first centuries AD up to the XIII c.AD and the specific topography. And only the comprehensive investigations of towns of Sauran surroundings let to answer the problem on location of premongol Sauran. Near Sauran, in 3 km to the east is situated Karatobe. It was visited not one time by the researchers, which dated the site by the first centuries of the VI c. AD.

Bu the new researchers let to reconsider the time of life of Karatobe and to refer the last period of its existence to the XII c. AD. On the site was collected a big material of the pieces of glazed bowls with the characteristic for the XI-XII cc. transparent glaze above white angob and painting with green, red and brown colors. In the west part of Karatobe rabad are noted the traces of ceramic production – the remains of ovens, slag, waste production. Topography of the site is characterized by the availability of features belonged to the towns of the developed middle ages. Here are presented the citadel, shakhristan and rabad, brightly seen in the topography of site. They are all main structural compounds of town of the developed Middle Ages. 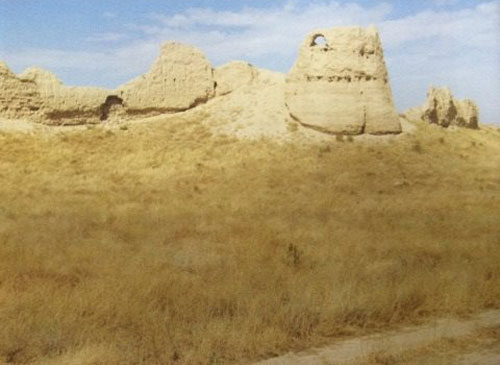 But the most valuable argument to prove identification of Karatobe-Sauran is the remains of some rows of walls around rabad of Karatobe. Their outward ring is going out of the central ruins on the distance 1-1,5 km, then inside there are two more rings of walls. It was already noted above that written sources, underlining the character of Sauran, inform on its fortifications, particularly, on the seven rows of walls. Probably, exactly the remains of these walls are observed in the topography of the site Karatobe.

So, we can inform now, that Sauran of the VI-XII cc.was situated on the place of the site Karatobe, and Sauran of the XIII-XVIII cc. was replaced to a new place and the same monument corresponds to it.

Is the new information has been received on the character of this site by the researchers of last years and comparison of archeology-topographical observations with  information of written sources let to give more detailed imagination on the late medieval Sauran.

The walls of Sauran

Decoding of air photo pictures of the site together with the analysis of topographic plans and visual observations gives the possibility to characterize the ruins as follows.

The site Sauran is the oval in plan square, surrounded by the wall; its swollen parts remained on the height from 3 up to 6 m. It is prolonged from the north-east to the south-west on 800 m and from the north-west to the south-east on 500 m. The square of site is arisen over the surrounding plane on 2-2,5 m. The wall of town was built on stand in height 2-3 m. The detailed visual research of all length of the wall, remained satisfactory, showed that fortress wall had at least two periods of construction. More exactly, the initial wall (stage I) was under the general repair and reconstruction (stage II). The traces of this reconstruction are obviously seen on the remained parts.

The initial wall had the notched parapet and shooting square. In some places these details are opened after the natural destroy of the latest laying. It means that it had shooting square going on top, what supposes the essential thickness of wall in the upper part (not less than 3-4 m) and much bigger in the low part. In the notches of wall, having the cupola ending, are established shooting gun-slots. The initial wall (at least, the notches) was formed of raw bricks and processed comprehensively. During the repair and reconstruction the parts with the destroyed initial wall were built, and their remained parts were closed by the coat of w new lying. Under it, the top of wall was put over the former level on not less than 2-3 m. In the wall are observed four two storey temples going out of its outward line. The floor was divided by cupola, stood on the trumps, the remains of which are preserved up to current time. In the walls of towers are cut narrow lines of gun-slobs.

Two gates were going inside the site. The main gates are situated in the north-east part of wall and presented as strong fortification construction flanked by two going out outward temples with two floors. The entrance s twenty meter corridor-shaped pass formed by going out parts of wall. The second gates are in the south-east part of the site’s wall. In eth eastern part of tower was one more, probably, secret entrance into the town in a form of pass in width 1,2 m, height 1,7 m.

The main street started from the northeast gates divides the territory of site for two almost equal parts by the line north-east-south-west. Not reaching 150 m up to the south-west part of wall, it comes close to the perpendicular street going in direction from the north-west to the south-east. One of its parts goes to the south-east gates. Except two main streets in the topography of site many small streets and alleys, forming the complicated branched street net of town have been observed.

Central Main Street having in some places the width up to 10 m goes from the entrance in the north-east part of wall inside the town. Town street line is formed from it, now observed clearly by the narrow gullies between high (up to 1,5-2 m) hills of dwelling sections or separate capital constructions.

Central Street is in 200 m from the north-east gates goes to the vast central town square in size approximately 120*40 m. Under the exit to the square the street is widened up to 16 m. On the right and on the left two-meter hills are situated, covered by the pieces of burnt bricks. The square has under rectangular contours and is situated by the long axis across the direction of the main street. By the perimeter of square are situated strong hills of ruins of constructions built, obviously, of square burnt bricks. A lot of pieces of bricks on these hills notify on this fact. There are especially big quantities of them from the north-west and north-east sides of square.

Along the north-west side of square is situated under quadrangular in plan part in square about 30*35 m, contoured by the perimeter by not high bank in height 0,5-0,7 m, under which are observed the contours of wall ruins. 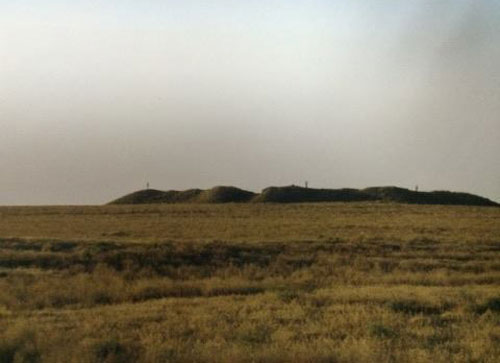 Inside of this rectangular from the south-west side, on the micro topography of part is observed the construction prolonged along all this side. In the middle of the remained square is the characteristic round hole, which could be formed on the place of sometime, existed here well. Entrance to this part is observed in the south-eastside, turned to the square. The rectangular of all this construction is directed by the long axis in direction north-east – south-west.

On the materials of the book “The medieval town Sauran”, K.M.Baipakov, E.A.Smagulov, Almaty, 2005