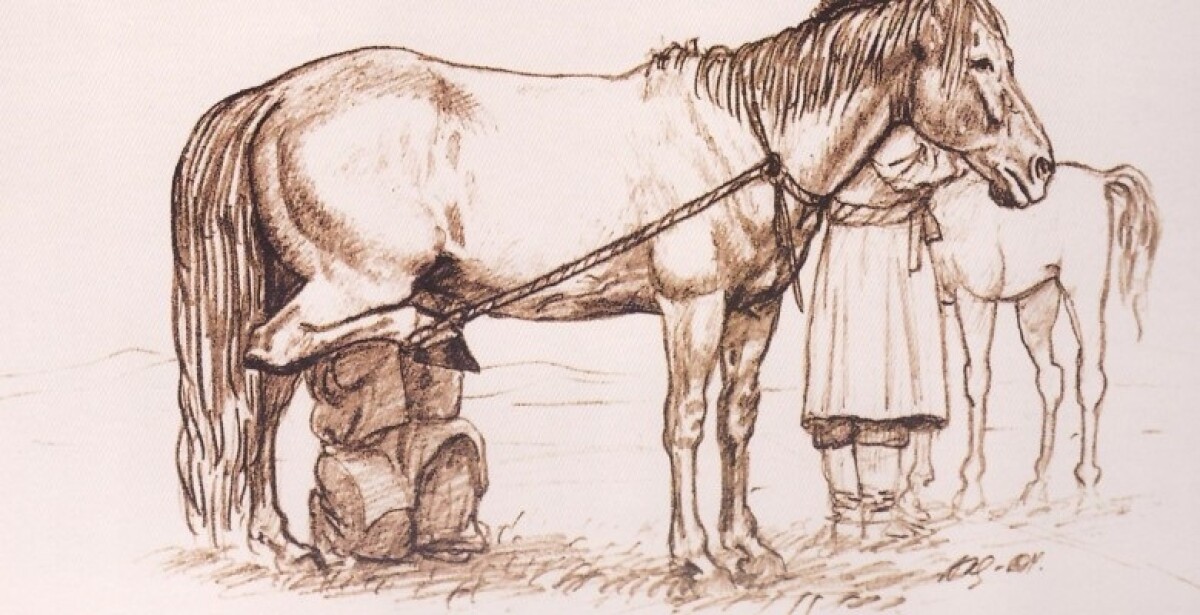 Weight measures were used to determine which of the objects is harder. Since ancient times Kazakhs measured small items, small length and distance by span, steps, finger and others

The Kazakh speech preserved expressions denoting time, distance and width, "at shaptyrym jer" ("distance covered by steed"), "Bie sauym uakyt" ("the time takes to milking mare"), "barmak Eli" ("the thickness of thumb"). To measure the volume of fluid (kumys, shubat etc.) Kazakh people used leather vessels such as konek, zhantorsyk, torsyk, mes, saba etc., which gradually became the unit of liquid measurement. The volume was determined by the size of a dishware. For example, 7-8 liters of kumys could be accommodated in torsyk, and 2.5-3 torsyks in mes.

Eng. measures yard and inch are similar with the Kazakh measures - koldyn kary (for the forearm) and barmak (thumb). If inch - a distance equal to the end of the thumb to its first joint, for barmak it is width of thumb. There is also a similarity between the terms "foot" and "Taban" (foot). Similar in the origin the old Russian measure miles and Kazakh shakyrym, spool and myskal, the British pound and the Kazakh Kadak. Measures include koldyn kary or kary - a measure of length equal to the distance from the middle of the chest to the end of the index finger (about 80-85 cm.). Sometimes kary measured the distance from the right shoulder across the chest to the end of its outstretched fingers of left hand (approx. 1 m). Kary - widespread in the east. countries ancient measure of length, which is found among almost all people in the world. At the Babylonians kary amounted to 525 mm, and was the basic unit of length in the Babylonian system of measures. The rest were derived from it. In Egypt, used measures of large kary (approx. 525 mm) and small kary (approx. 450 mm). In the manuscripts of Babur (XVI c.) kary equal to 6 tutam (approx. 500 mm) and 1.5 times more than it, mentioned.

Also was used Synyk suyam (distance from bended joint of index finger to the thumb). When Kazakhs knew of the Russian measures their values became more specific. For example, suyam was equal to a quarter of a yard. Eli - a measure of length equal to the width of the index finger (approx. 2 cm). Four stacked finger (from index finger to the little finger) was called "Four eli" (approx. 7-8 cm). Barmak (width of thumb) - approx. 2.2-2.3 cm. In individual cases for Barmak took a width of 6 grains of barley, stacked in a row. Thickness of kazy, width of patterns were measured by means of these measures (eli, barmak).

Buyn - measures of length, the length of the two joints of middle finger - 5-6 cm. Dimensions of ornaments on the walls of various buildings, palaces and so on were measured by means of buyn, which was also used in the masters’ works of sewing national clothing and in decorative works.

Kadam - a measure of length equal to the human step (approximately 60-70 cm). Widespread in all the countries of the East measure farce - equal to 12,000 Kadam and widely used for measurement in building case and in the construction of irrigation systems.

Kulash - a measure of length equal to the distance between the ends of the fingers of both hands extended in opposite directions at the shoulders. Kulash was used in trade, in the home, as well as in the calculation of the taxes payment. Common measures weight in Central Asia and Kazakhstan was tabak - a measure of weight equal to 12 pounds. It was used in Central Asia and South Kazakhstan. It was divided into large and small tabak, which were respectively equal to 11,7-12 kg, 3,9-4 kg. Big Tabak was used for the payment of land tax. Small tabak was used for measuring the grain weight.

Kap - a measure of weight. In the south of Kazakhstan and Centr. Asia amounted to 65-66 kg, in other areas of Kazakhstan - 6 pud (96 kg) and was used to measure the weight of the grain. It was applied in the calculation of the payment of taxes, in mutual trade and exchange of goods.

Batpan - a measure of weight, used in the outlying regions of Russia (mainly in the Asian side). The first information about batpan in Russia occur in the book of A. Nikitin "Journey Beyond Three Seas". In the other Russian written monuments batpan amounted to 10 pounds. Kadak - a measure of weight, was used in most countries of the East, was equal to pound in Europe.

Myskal - widespread in the East measure of weight; it was used as an official measure of weight in all Arab. countries, India, Eastern Africa, Central Asia and Kazakhstan. It was used primarily as a weight of gold measure, silver, etc. Among Kazakhs myskal was used to measure the weight of medicines, paints and various dyes. In Central Asia and Kazakhstan, in agriculture and irrigation systems, land measure tanap was used.