Home News The Modernization of Kazakhstan’s identity Bektau-Ata: the place of a Breathtaking landscape

Bektau-Ata: the place of a Breathtaking landscape 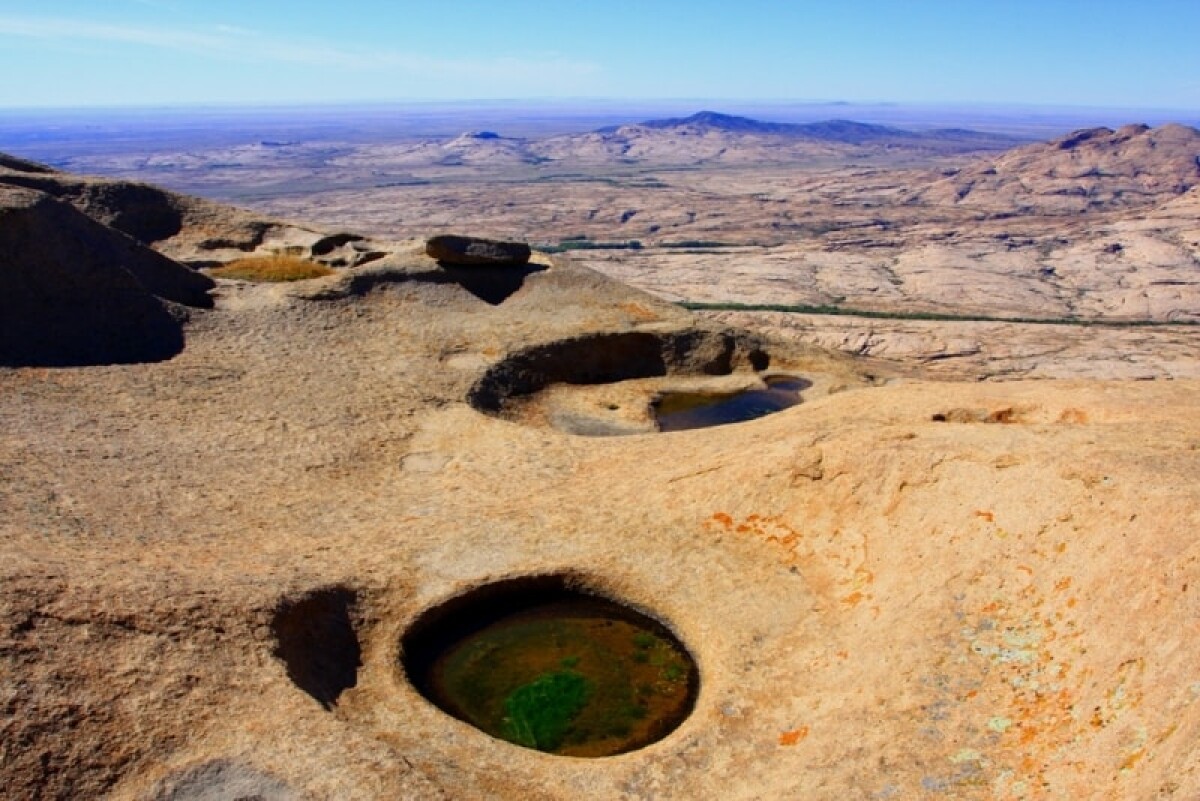 In Bektau-Ata, not only the waters in the caves are curative, but also the air itself, saturated with the smell of dog rose, taolga, hawthorn, honeysuckle, currant. Very rare plants listed in the Red Book, such as the Bektauauvsky kopee, have been preserved here.

But not only the flora makes Bektau-Ata great. Among the flooded stone layers and numerous bushes, you can find a rare animal - a five-fingered dwarf jerboa, and hunters gambol at the mountains, knowing that in the lower reaches you can meet a corsac, fox, and arhar if you are lucky, then a practically destroyed saiga, hunting for which is prohibited. Unless wolves, which are also found in the tract, can attack the Red Book.

The feathered world also will not leave indifferent fans to rest on the nature: shy turtledoves, golden orioles, lonely brewers, restless heaters and, of course, nightingales. Sounds produced by the main soloist of the tract are reflected from the iridescent mountains, clinging to the crowns of trees and penetrating into the heart. It's just incredible. 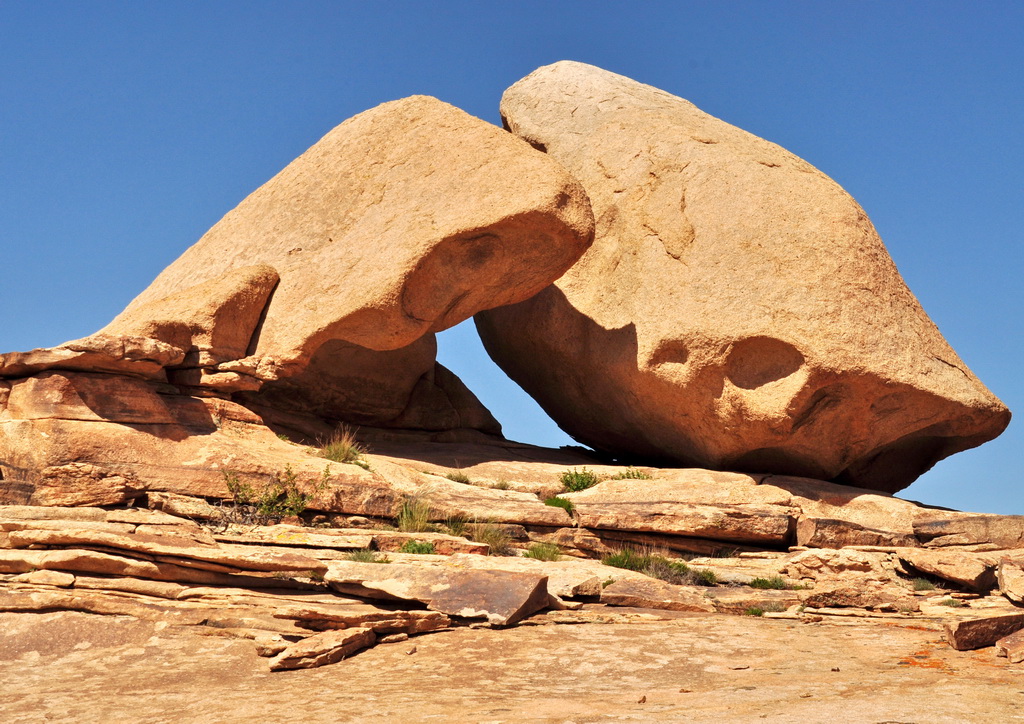 Here is a special microclimate, which allows for the existence of the richest flora and fauna. Passing along the highway can not even imagine what secrets are hidden among the tops of mountains visible near the road. And only some of the lucky ones smile mysteriously at this place. But there really is cinematographically beautiful. Among the fairy-tale mountains with intriguing names "Pik", "Cherepakha", "Sunduk", "Tryekhzubka" are small forests, small lakes with healing water, mysterious caves.

The cave Amangeldy or Aulie-tas is the most mysterious and large. Legends of its origin are many. According to one of the versions, in the lower reaches of the gorge there was a village, which was attacked by an enemy army. Then people turned to their sage named Beck for help. The elder led the people to the mountains to hide him from the pursuit, but the way they were blocked by a wide and dangerous river. Beck waved his hands, and the river stopped, opened and let people pass, and then again merged into a single stream, leaving the pursuers behind. Seeing the people in safety on the new earth, the elder left him and, having risen high up the mountain, began to live in a cave, strictly forbidding climbing the top of a huge rock. This rock and the area around it people were named after the savior - Bektau-Ata. Beck helped people with advice, medicinal drugs, meeting with those in need at the entrance to the cave. Women came to him with their pain, shared their experiences. These are their tears, flowing along the shimmering caves of the cave, had healing power. Many centuries have passed since then. The cave, which often heard women's voices, was called Aulie-Tas - "Holy Stone". They came here with requests for marriage, prayed for conception, children's health, comfort and happiness in the family.

In the Soviet period, the name of the cave began to sound more and more like the cave of Amangeldy - in memory of Amangeldy Imanov, who led the liberation movement during the years of the revolution. And this is the basis of another legend. While conducting the partisan struggle, Amangeldy Imanov was persecuted and for a long time hid with his supporters in the caves of the mountain massifs on the territory of Turgai. The story of the national hero who dreamed of the salvation and freedom of his people is so similar to the legend about the elder Beke, who saved the villagers from the enemies, that the locals named Aulie-Tas changed in honor of the famous liberator. Now people come here to ask for firmness of spirit, support and confidence.

But not everyone can find the entrance to this fabulous place. Climb to the grotto along a steep and narrow path, overgrown with thorny bushes, very hard, and not everyone will master this path. But if you find the entrance, then you can already enter into the cave in full growth. Its depth is thirty meters. Approximately from the middle of the cave is filled with fresh water, which forms a whole lake. Scientists say that this is just physics: the merciless hot sun is heating up the smooth rocks, and in the coolness of the dark cave, condensation forms, which flows down the walls and gathers into the pond. The cave of Amangeldy does not frighten at the entrance to it, does not terrify you while you are in the deep. Visiting only arouses curiosity, brings peace, gives strength. Is not this magic? 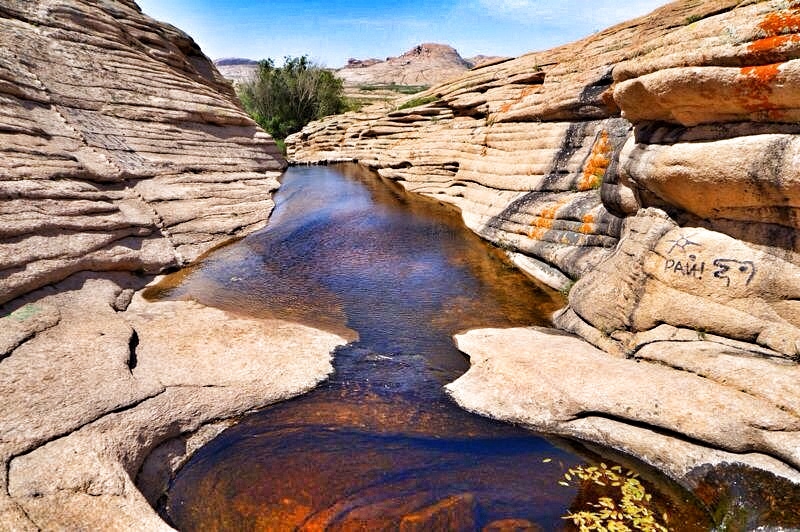 The mesmerizing landscape of Bektau-Ata

The sun creeps the shadows in the tract all day long, cardinally changing the place and creating the feeling that you are on another planet. Some scientists believe that the fantastic pink shade of the mountains is nothing more than a granite volcanic lava frozen on the surface of the earth. Here, in the Paleozoic era, a large volcano was born, in the depths of which the rocks were melting, never breaking out to the surface and forever sealing the mouth of this great force. Other scientists put such a version in doubt, assuring that the granite does not melt, but at high temperatures it would simply turn into sand. However, judging by the unusual geometry of the formed mountains, the first story seems more plausible.

The pasted and frozen rock formations are like a huge multilayer pie. Indeed, the granite rocks seem smooth, but near it is rough. Therefore, adults and children can easily climb the slippery slopes of the mountains, getting great pleasure from the ascent, and enjoy the view from the height, among other things, 1500 meters! And when in this area, greedy to rain, it rains, the streams of water rush along the slopes of the mountains, reflecting and shimmering in the sun. Then the mountain shines like a huge jewel. 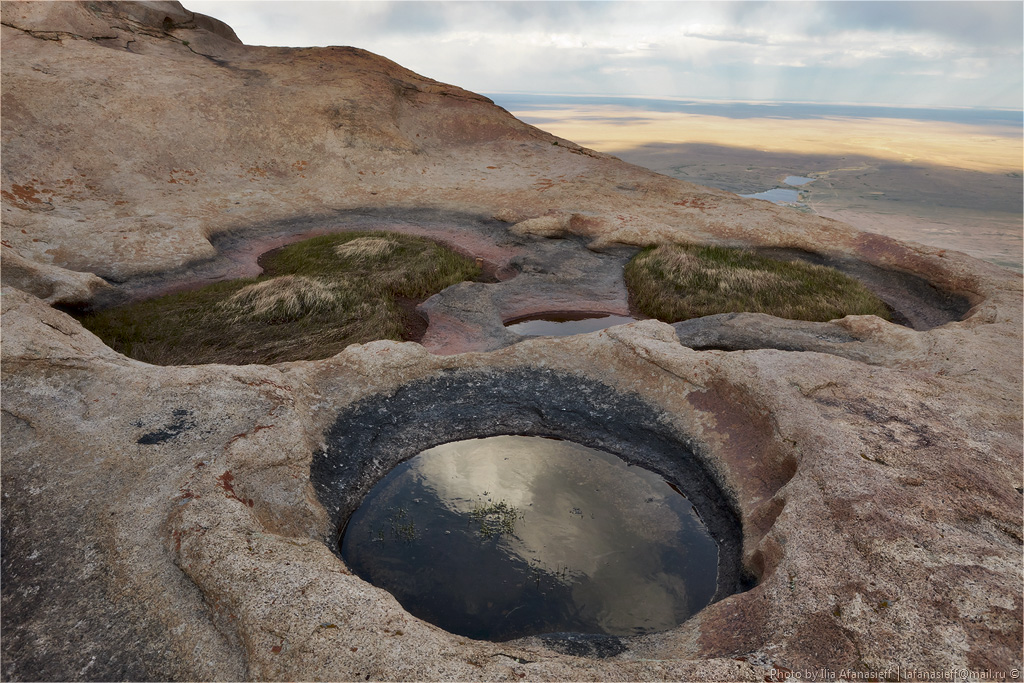 In the depths of the caves and the gorges of Bektau-Ata, you can really find incredible multicolored "pencils", as we called them in childhood for the external similarity with the eponymous subject, quartz crystals, topaz, rauchtopaz, morion, fluorite and rock crystal. Children's camps "Veselaya Plameta", "Fakel" "Solnechniy", "Gorniy" and others, which since the times of the USSR visited all the children of Balkhash without exception, were filled to capacity. It was considered an insane success to send your child for the summer season to a cool, mysterious place, rich in meadow and steppe plants, generous in fairy tales and mysticism.

A huge number of legends of the origin of this amazing mountain range carries with its variety, up to foreign intervention. Many people consider it enigmatic to find a lake and a strange rock, similar to an ancient giant mine. And layered outgrowths resemble frozen piles. And indeed, some stone blocks look as if molten masses were poured on them, when they solidified, streaks and apparent stratification formed. And it would seem, for the career and the scale is great, and the technology of mining is not clear, but so were the workers uneasy. They say that they found fossilized footprints, the supposed growth of the owner was 10 meters, and some stone blocks resemble the huge heads of alien creatures.

The beauty that steals hearts

The area of ​​Bektau-Ata is diverse and controversial - among the picturesque rocks formed a small plains, where deepening after the rain accumulates cool fresh water. A lot of such reservoirs can be found on the way to the mountain peaks, they do not dry out until the end of summer. Thanks to the millennial work of water, sun and wind, a fantastic landscape appeared. The processes of weathering for many years destroyed the rock, and where the granite was less durable, took the most incredible forms. Literally on bare rocks, piercing stone armor, archa grows, and the moss brightly envelops the rocks and decorates them with such bright colors that it seems that the mountains painted a very talented artist. 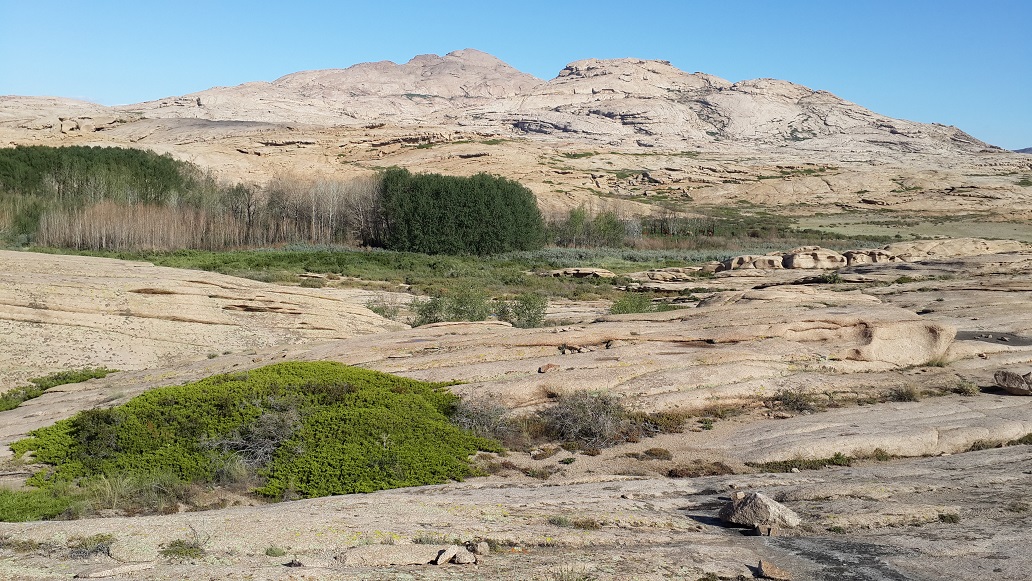 After sunset, the Bektau-Ata mountains become supernatural: they are painted in a lilac shade, they create the impression of scenery of a science fiction film. Small lakes filled with fresh water seem to be extraterrestrial excavations. And all these mysteries, riddles attract here not only romantics and dreamers, but also scientists.

Embrace of Bektau-Ata gives beauty at any time of the year. Autumn and spring reveal his soul. And winter shows its serene and snow-white border with all the additional winter entertainment for every taste. Here the snow is special: white, fluffy, sparkling, and it's enough to go skiing, tobogganing, playing snowballs, just lying around in the mountain crunchy snow, gaining strength and positive emotions. There are many legends and legends about the existence of healing springs, a desire stone that helps all those who ask, and other mysterious places that the seeker opens up. The magical power of the gorge draws to itself, allowing each to be imbued with its energy.

In Balkhash you can come in the summer to bask in the sun on the shore of a unique lake, breathe the mountain air in the beautiful place of Bektau-Ata, in winter it is possible to get great pleasure from skiing along the slopes of mountains, and then get warm with a real fish soup from the fish of the legendary lake Balkhash! We are very fond of, proud and cherish our natural pearls.