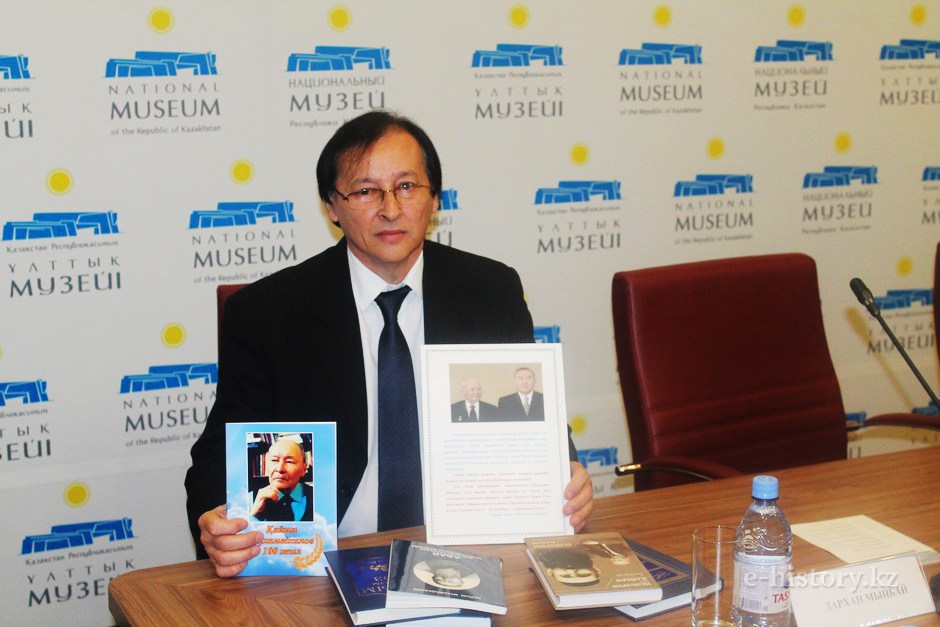 A round table on the occasion of the 100th anniversary of Kayum Mukhamedkhanov’s birth was held at National Museum, where the life and work of the great scholar were discussed.

Mukhamedkhanov Kayum Mukhamedkhanovich is a prominent scholar, textual critic, founder of Abai study, Mukhtar Auezov’s comrade, member of Writers Union of the USSR since 1940, community leader, writer, poet, playwright, translator, teacher, founder of Abai’s Museum in Semipalatinsk. His regalia and achievements can be listed endlessly, but detailed information was possible to obtain from the closest relatives of the famous scholar, his son Kanagat Kayumovich.

-What contribution was made by Kayum Mukhamedkhanovich’s children in the creation of existing fund?

-There is Kayum Mukhamedkhanov Culture and Education Center. His work was prohibited during the lifetime — these are «Alashorda», «Shakarim» and others, which he returned from non-existence. Ilyas Boragansky is the first publisher of «Abai» in Saint- Petersburg. He never saw many of those books presented on the stand during his lifetime. 10 — volume edition of «Heritage of Alashorda», 4-volume edition, 2-volume edition and the encyclopedia are preserved in the archive. N.A.Nazarbayev awarded him the state prize for those works. Other works, such as «Textology», «Fate and Karlag», «Letters speak» and others we collected them with whole family thanks to this fund.

-Did he talk about torture?

-It is worth mentioning that he never told about it, we knew everything from Tursyn aga, because they communicated.

-Have letters that he wrote to his family been preserved?

-There are 2 preserved letters of Mukhtar Auezov, when he started to organize museum on behalf of M.Auezov. M.Auezov charged him with a task to collect materials. He had no time to go to Leningrad archives. The main correspondent on creation of «Abai’s way» was his favorite disciple Khamit. His students who are present on this event speak about it. He established Abai literary school — it is probably the only school of both Kazakh and World Literature. There are such bright representatives of that period as Shakarim and members of Alashorda. It was considered, that Abai was the first, then Sabit Mukanov and Mukhtar Auezov. But when Abai died, they were teenagers. He returned gap to Kazakh-Soviet literature from Shakarim to members of Alashorda to Kazakh people. He filled that empty niche.

-The government was against the celebration of Abai’s 100th anniversary. How did Kayum Mukhamedkhanovich react to that?

-He was appointed a scientific secretary of jubilee committee. At that time he headed Abai Museum. He also invited many prominent leaders of republics to Kazhymukan’s 100th anniversary. He was involved in holding of anniversaries, wrote to various authorities. He addressed to Leningrad Porcelain Museum to make dinnerware sets, to President Kanysh Satpayev to present gifts to guests from other countries. He worked on the task to build reservation in Zhidebay on Pushkin and Turgenev type and install a monument. That area was closed due to nuclear testing. After persistent requests the museums were opened in Zhidebay and other places, monuments were installed to Abai and Shakarim. He thoroughly knew all those places, when he went round those places with a photographer in a lorry and collected exhibits for museums and asked witnessed who lived in Abai’s time. That was the way how the museum and literary school were created.

-What areas of activity unknown to the public Kayum Mukhamedkhanovich was the first too?

-He was the first author of the anthem, first organizer of them museum, first winner of «Alash» award, he was called a pioneer of Kazakh literature. He was recognized as national scholar, national writer, because he had never thought about himself, he said: «My life is nothing when such people from Alashorda died». When he was on the verge of death, he continued to promote Abai. He was the first laureate of «Abai» international literary award. He hung the pictures of Kenesary Kasymov, Shokan’s descendants and many others. The authorities told him that they were enemies of the people and he should take them away, but he did not obey. In 1951, he was repressed due to Abai literary school and Abai Museum. He was tortured nearly a year in the cellars of the NKVD in Almaty to refuse from literary school and sign a document stating that Mukhtar Auezov forced him to do that. But he did not sign and refused to do it, so was exiled to 25 years in camps.

-There are many young people who are engaged in textology of Abai, but their views differ, how can your Fund help them?

-Textology is a complex science, Garifolla Esimov and other scholars said that Kayum Mukhamedkhanov is the only textual critic of Abai, Shakarim, Bukhar zhyrau, Makhambet and others. He was compared to great critics. Even Russian scholars said that he embodied 3 great people of Russia: Dmitry Likhachev, Sergey Mikhalkov — the first author of Soviet Union anthem, Lev Gumilyov — a famous turcologist, who also was subjected to torture. L.N.Gumilyov said that many of them learned courage and firmness from Kayum Mukhamedkhanov in Karlag.

-Thank you for the interesting conversation!

Use of materials for publication, commercial use, or distribution requires written or oral permission from the Board of Editors or the author. Hyperlink to Qazaqstan tarihy portal is necessary. All rights reserved by the Law RK “On author’s rights and related rights”. To request authorization email to mail@e-history.kz or call to 8 (7172) 57 60 13 (in - 1163)
Қазақша Русский English
MOST READ
Month Year
Kazakh historical drama Tomiris premiered in Istanbul
ALASH IDEA IS THE PROTECTION OF KAZAKH STATEHOOD
Stolypin about the worries and hopes of immigrants to the Kazakh steppes
A tireless explorer of the Kazakh land
SWITCHING TO THE LATIN ALPHABET – UNITE ALL KAZAKH PEOPLE
Kunaev Dinmukhamed Akhmedovich
People who eat horses will kill you
Kazakhstan's participation in the Winter Olympics has a long history
Rebooting a field of science and education
Recorded history of Kazakhstan. Part 1
Historical Dates on the Bosphorus
Recorded history of Kazakhstan. Part 2
Materials on theme
Interview with an outstanding artist A.Mukazhanov
HISTORY BELONGS TO THOSE, WHO STUDY IT
Alpine Skiing participants at Winter Universiade 2017
On what means do historians live? History Teacher