Home News In honor of the 100th anniversary since the birthday of Kobikov Khamit: on his son’s tales

In honor of the 100th anniversary since the birthday of Kobikov Khamit: on his son’s tales 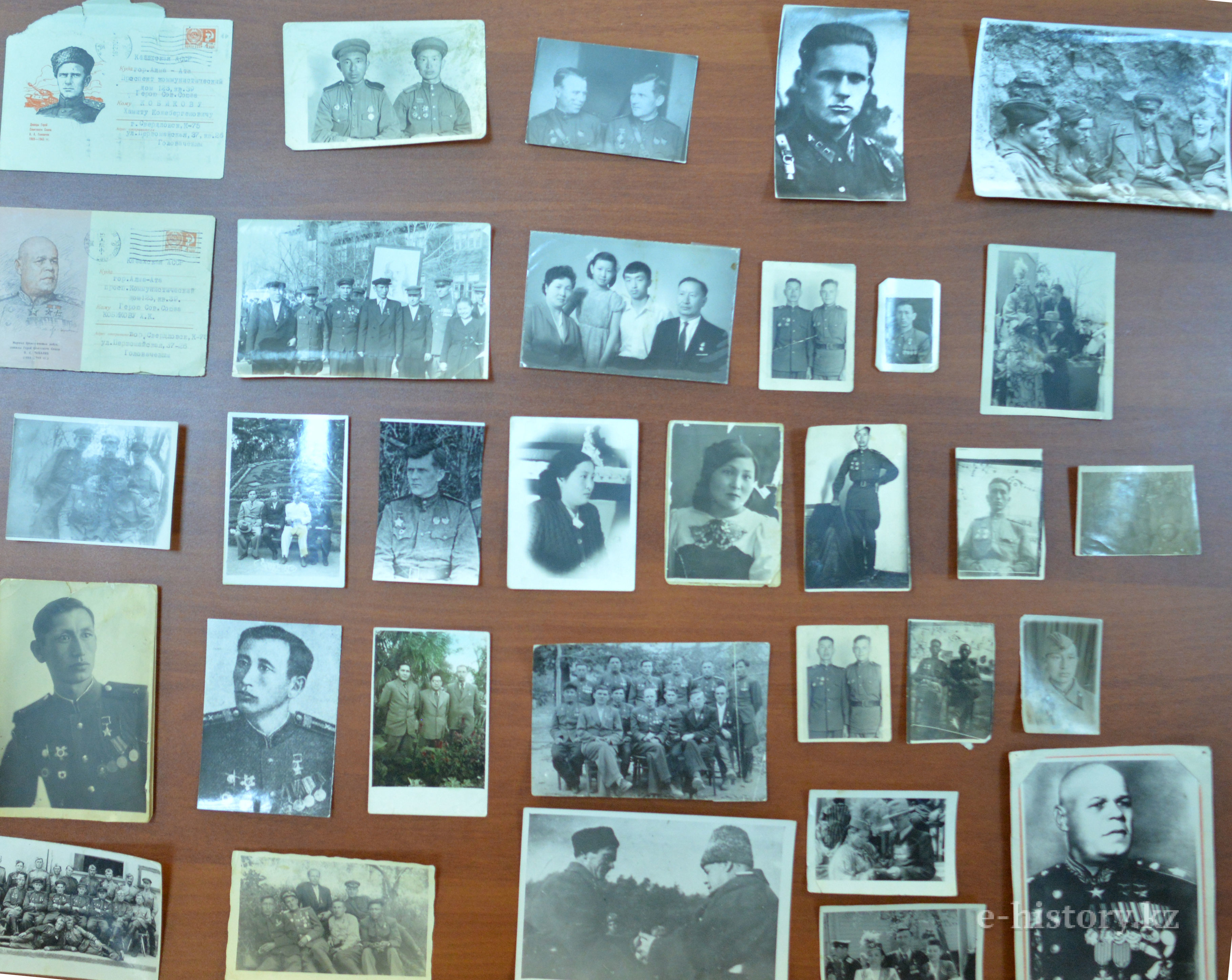 Khamit Kozhabergenovich – a unique, strong spiritually personality. He went through many sufferings, but did not give up. On the contrary, he differed with bravery, good will and courageousness.
During the live and interesting conversation in the studio Serik Khamitovich Kobikov born in 1949 y. — son of the Hero of the Soviet Union Khamit Kobikov told about unusual life path of his father, path of the winner.
— My father Kobikov Khamit was called up for the Great Patriotic War in early 1942. He was a common soldier in the times of Stalingrad battle, where he was severely shot in the hip, then was hospitalized for 3-5 months. He fought in 3 tank army with the Marshall of the armoured army Rybalko Pavel Semenovich and Golovachev Aleksandr Alekseevich — twice the Hero of the Soviet Union.
He was the commander of weapon as after being wounded he studied at the courses, became the sergeant artillery man in the brigade in which Golovachev a.A. — a former cavalry man was in charge. 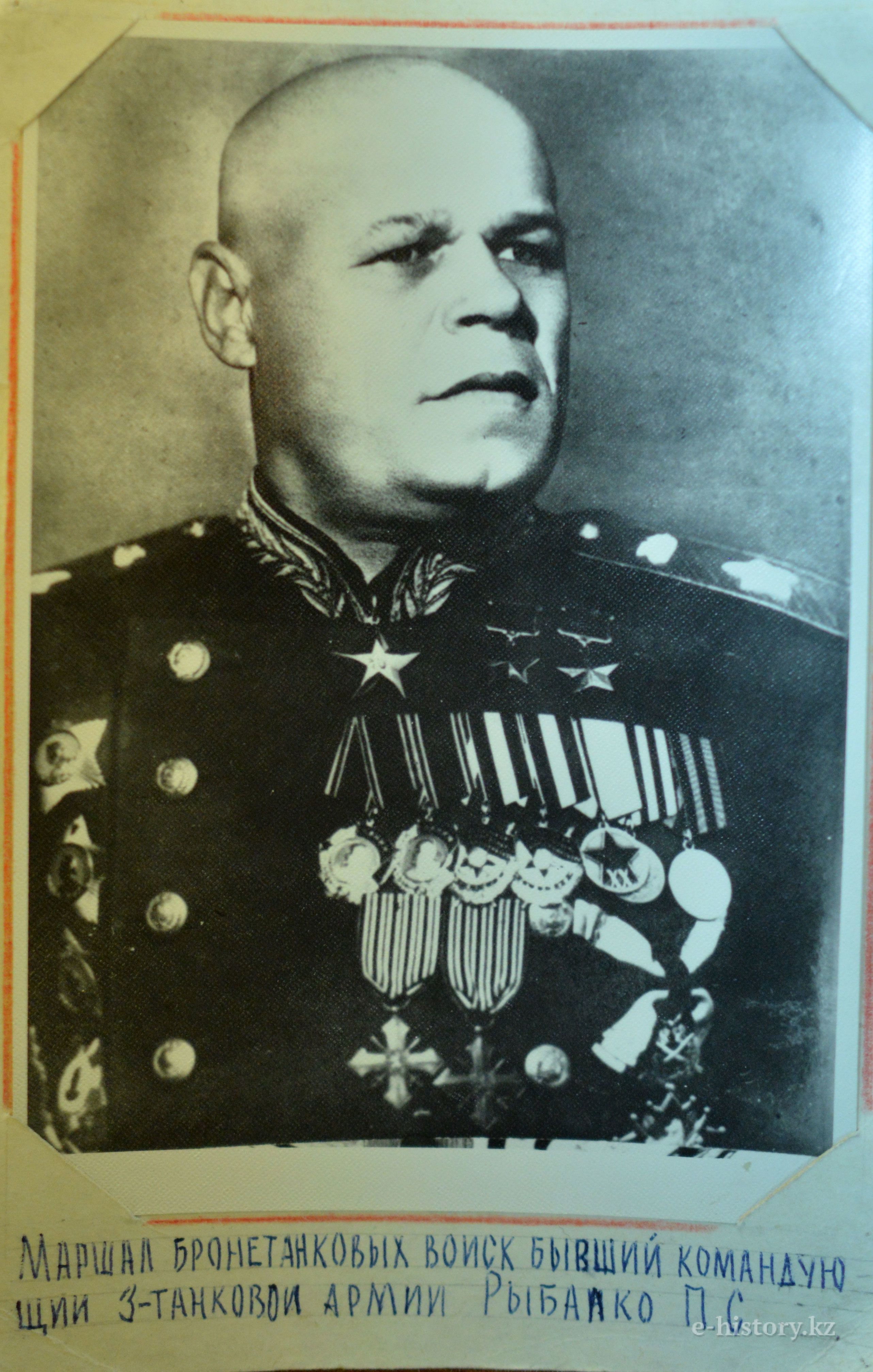 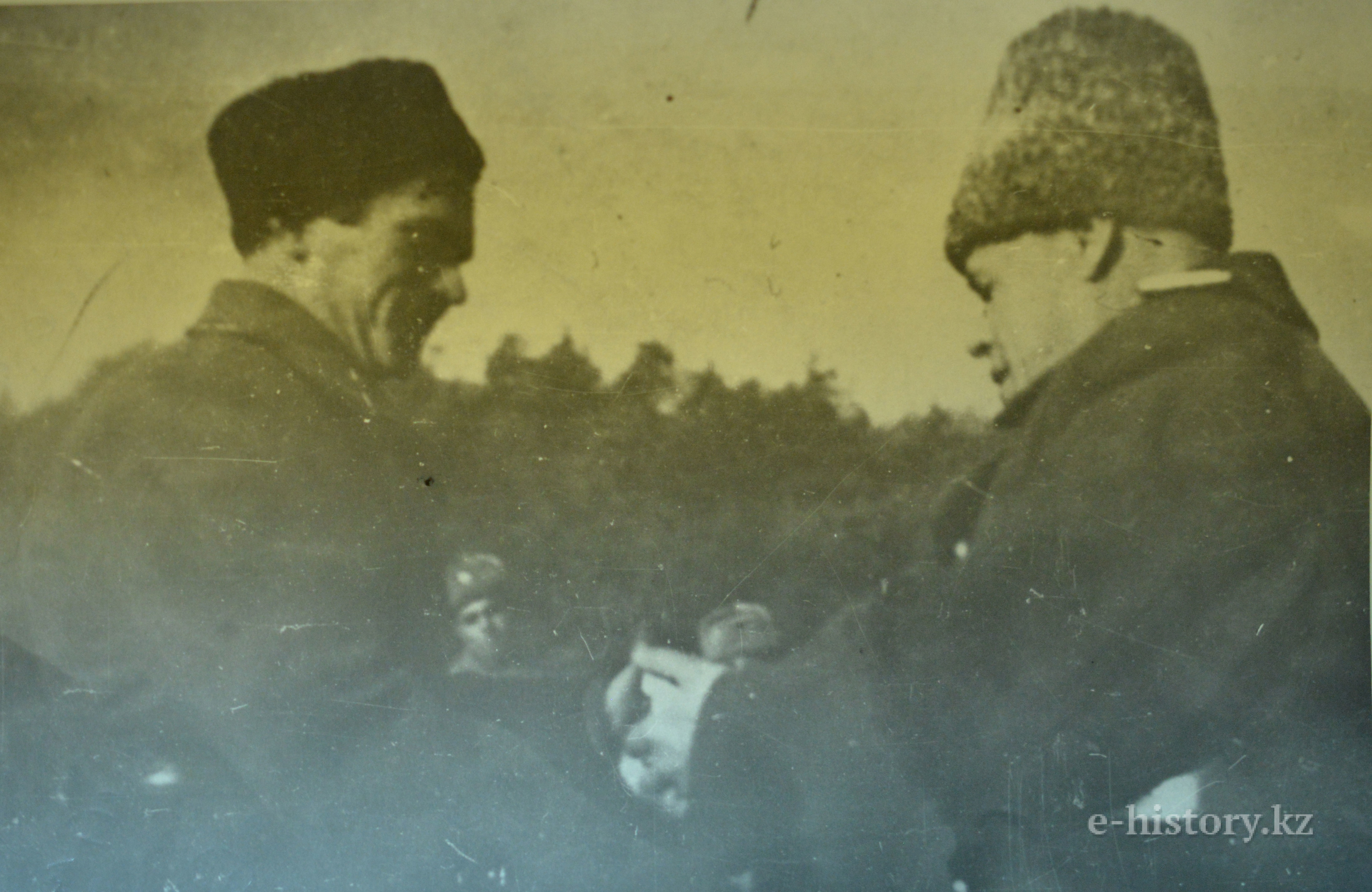 Rybalko P.S. gives the medal of the Hero of the Soviet Union to Golovachev A.A. 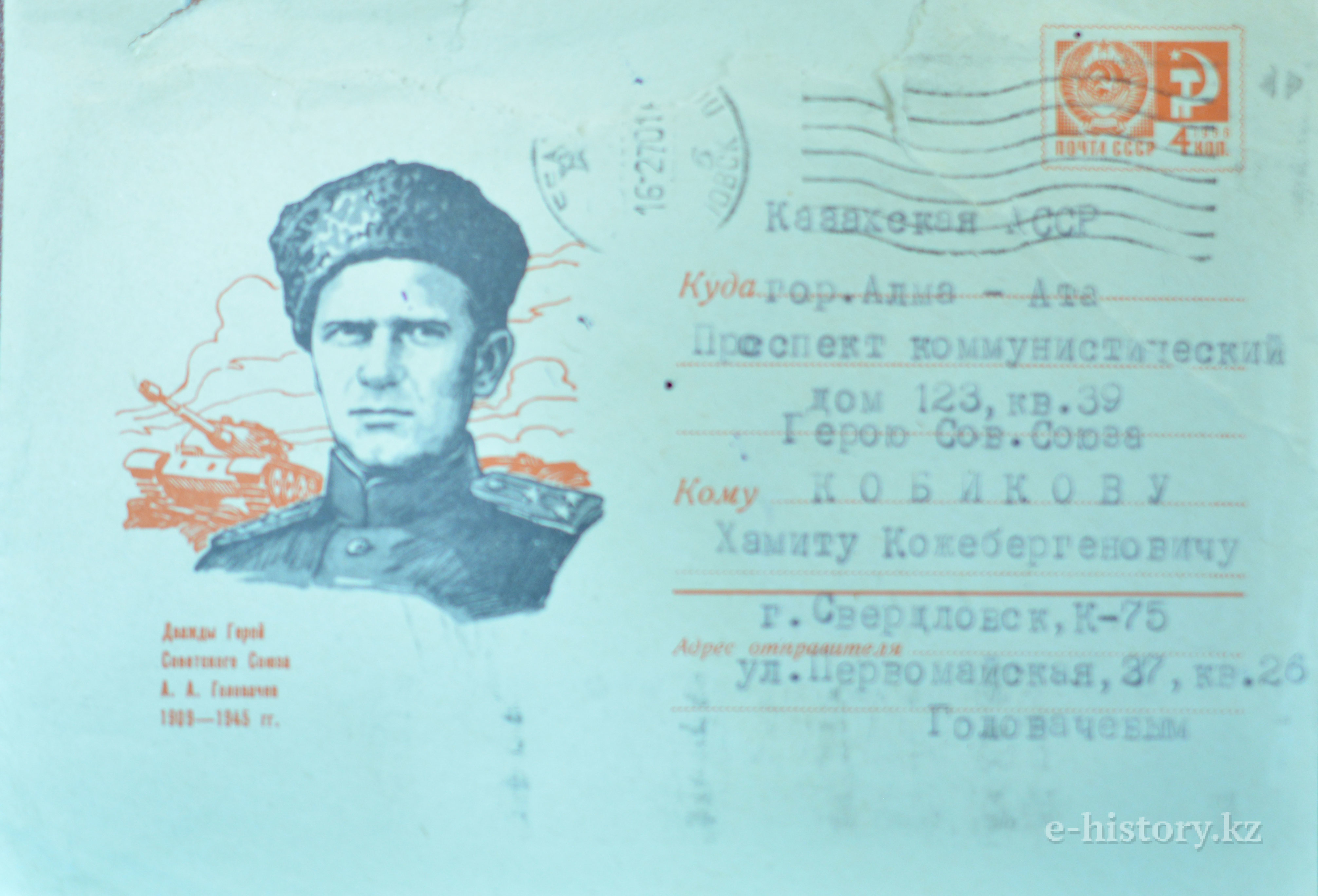 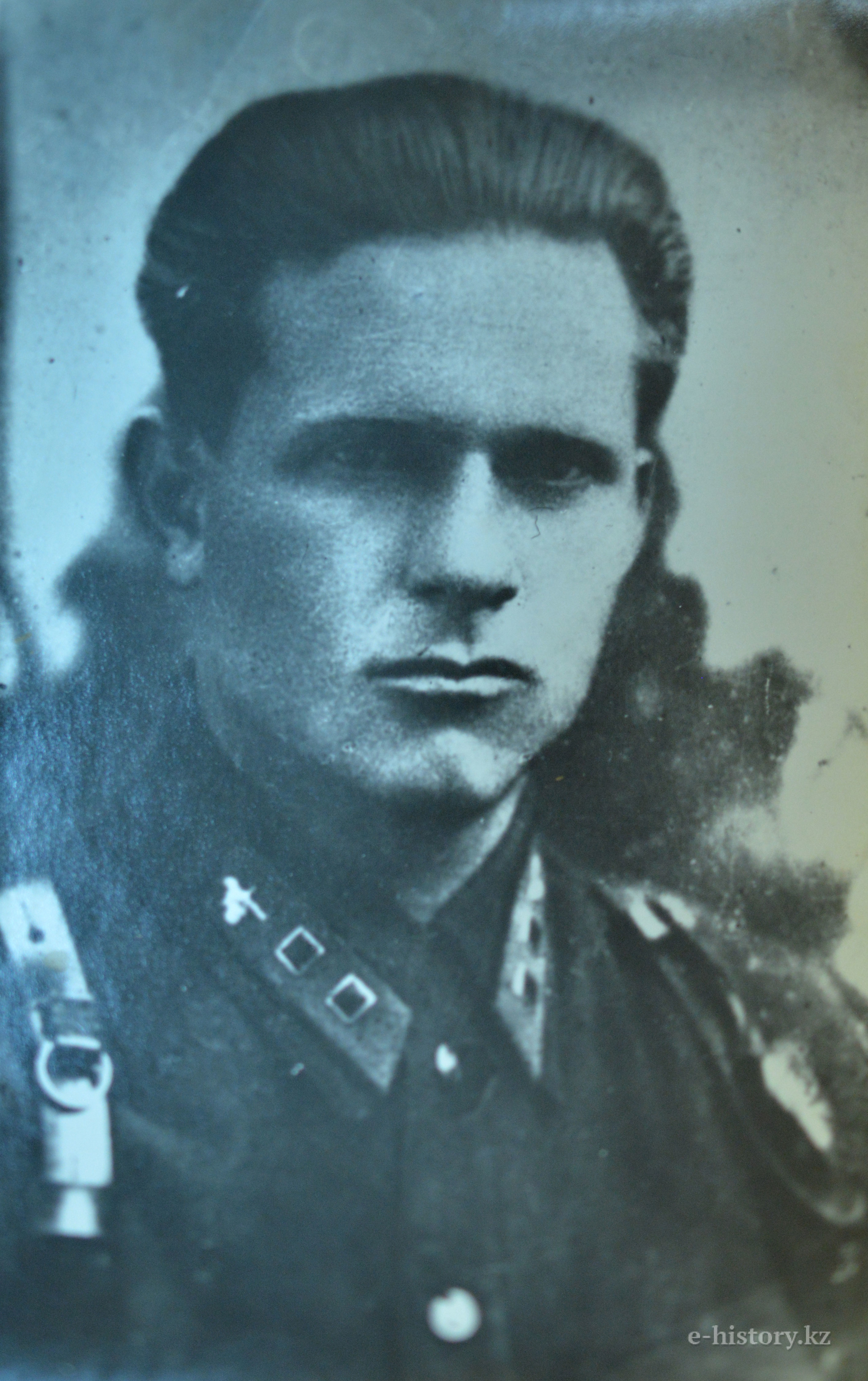 Golovachev A.A.before war
- It is memorable that Kobikov Khamit Kozhabergenovich and Ivanov Sergey Makarovich — a young gunner born in 1927 got the orders of the Heroes of the Soviet Union (to the rest the orders were given) as they were the first to cross the river Oder, settled at night at the western bank and provided the breakthrough to the rest of the army, also shot all the German protruded parts — 3 tanks, troops of soldiers, self-propelled weapon, and hid under the bridge. Ivanov fought only for 4 months and deserved the order of the hero. To add, he differed with unusual bravery and stamina, for instance, as the artillery shooting was on and all the people hid from the roar, he was just sleeping. 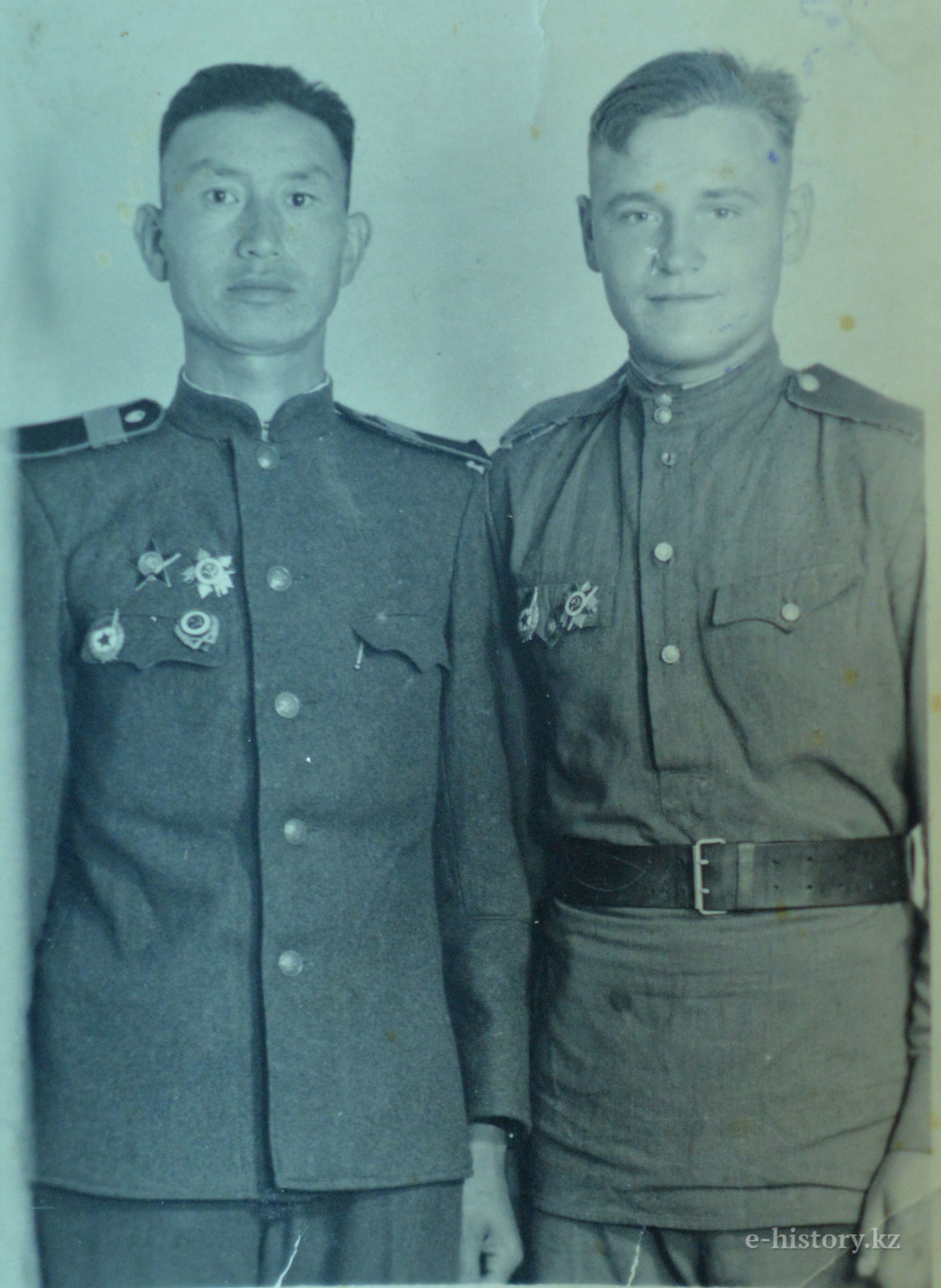 With Ivanov S.M.
- My father was a sergeant-major, took to his artillery gun crew his brother Abduvali. In Poland the castle of a German earl, who had the huge wine cellar. With the aim to preserve wine in the cellar the guard was set in each 20 barrels. In fact, the barrels with the diameter of 3-4 meters with capacity of 2 th. liters of wine. The elder brother of my father fulfilled the tasks of a zavkhoz (a person being in charge of the property) in this department. He and his colleagues were not indifferent to the saved «property». And they thought of this thing — they made a hole in the barrel, the hose was passed under the uniform jacket — they had to stand for about 6 hours, that is why they were replaced fast.
-Also, his wit helped him in the food issue. He found a woman — a Polish or German and made her cook, and she was the first to try the meal to check if food was poisoned, then they ate themselves. 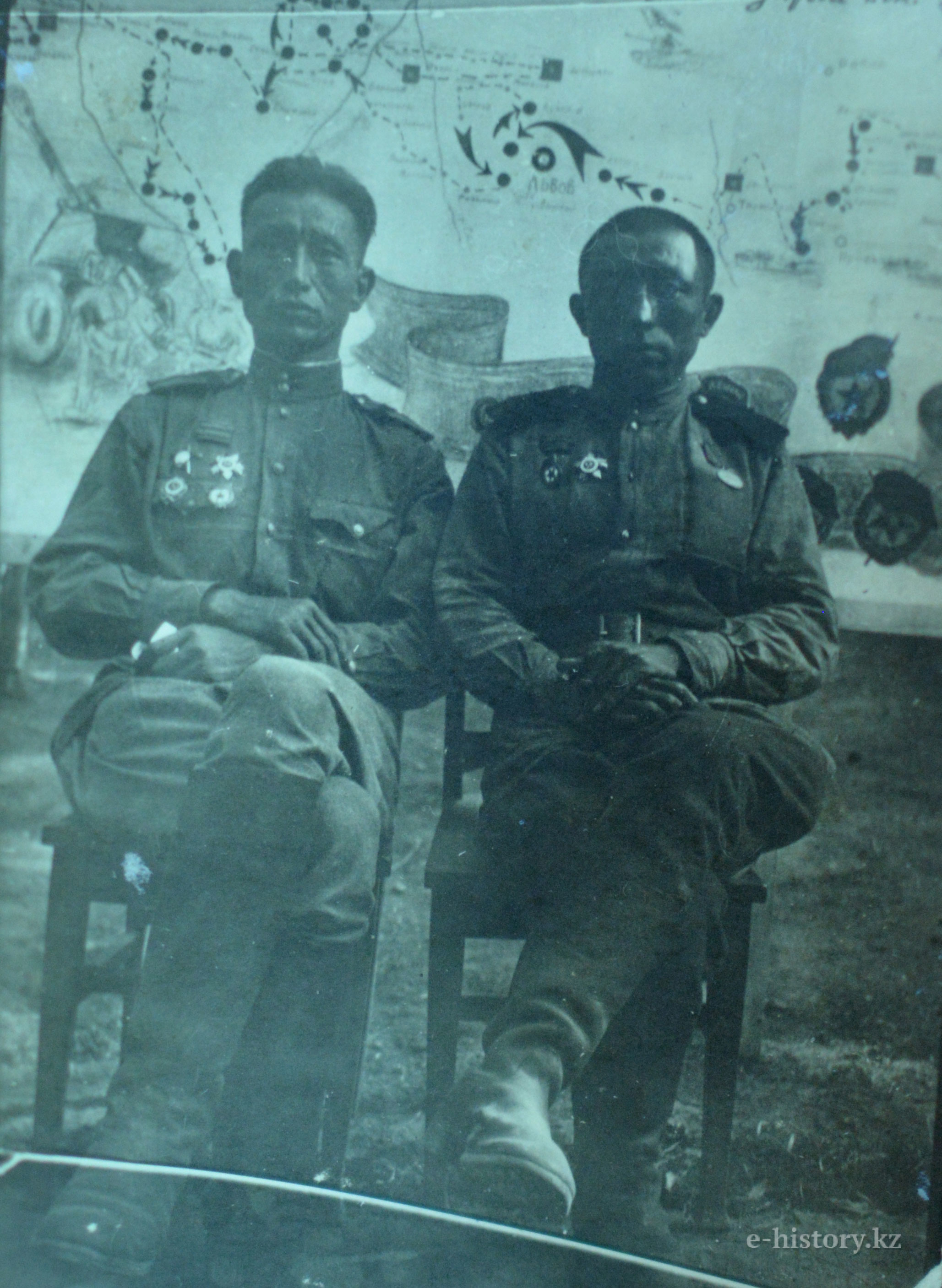 — And my father Khamit never drank or smoked and that saved him much, given 100 gr. of alcohol he changed for bread, sweets and chocolate. The command treated him respectfully. War is work also, it is necessary to have certain experience, skills, reasonably fulfill the tasks, the extra bravery should not be shown.
And my father was a very experienced soldier. However, he also suffered a lot, and the correspondence with his family, minutes of rest and sleep saved him, gave him power. Some people gave up. When they went to the territory of Germany, out the USSR his gun crew reaching 6 people was changed three times till the end of war. 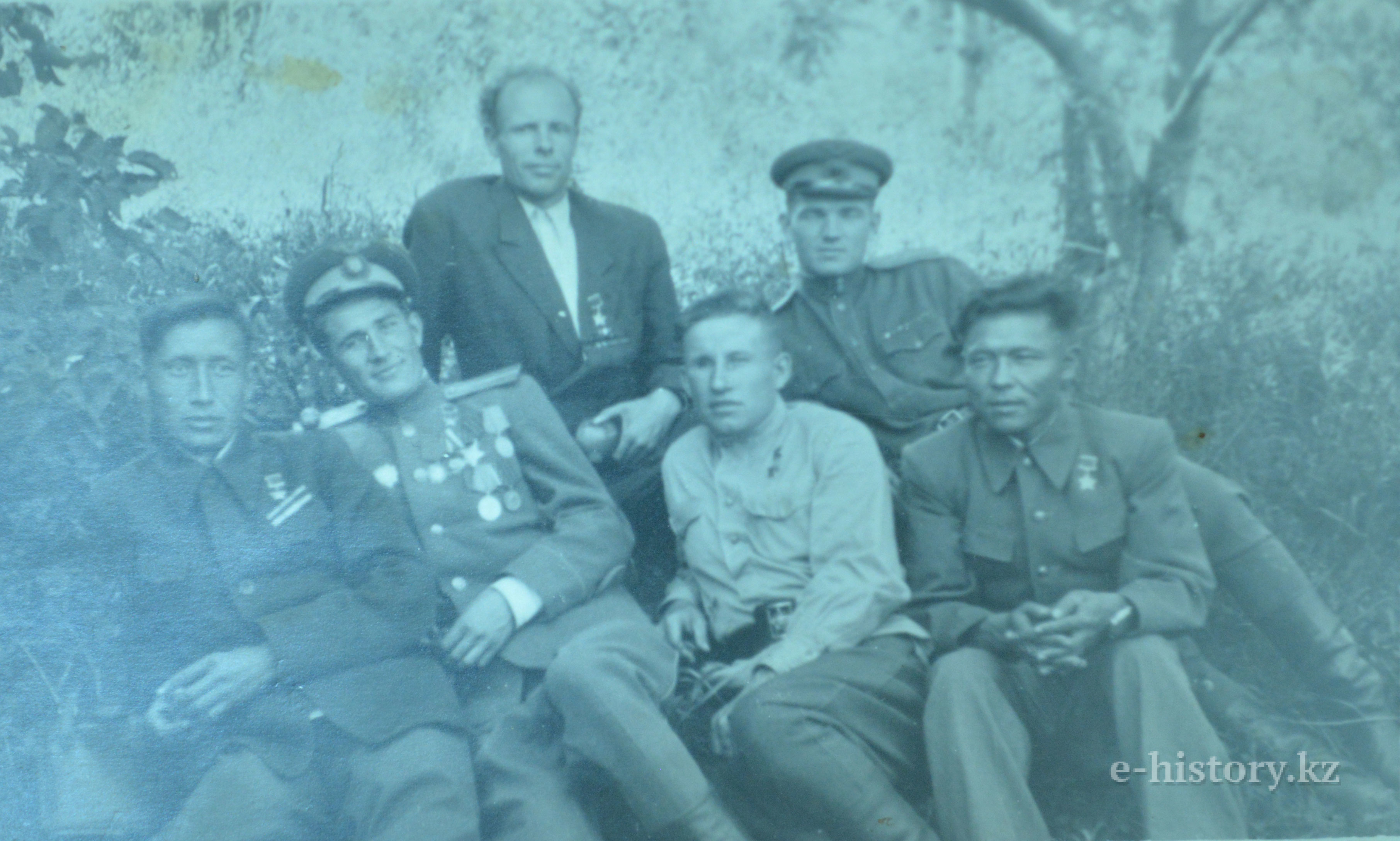 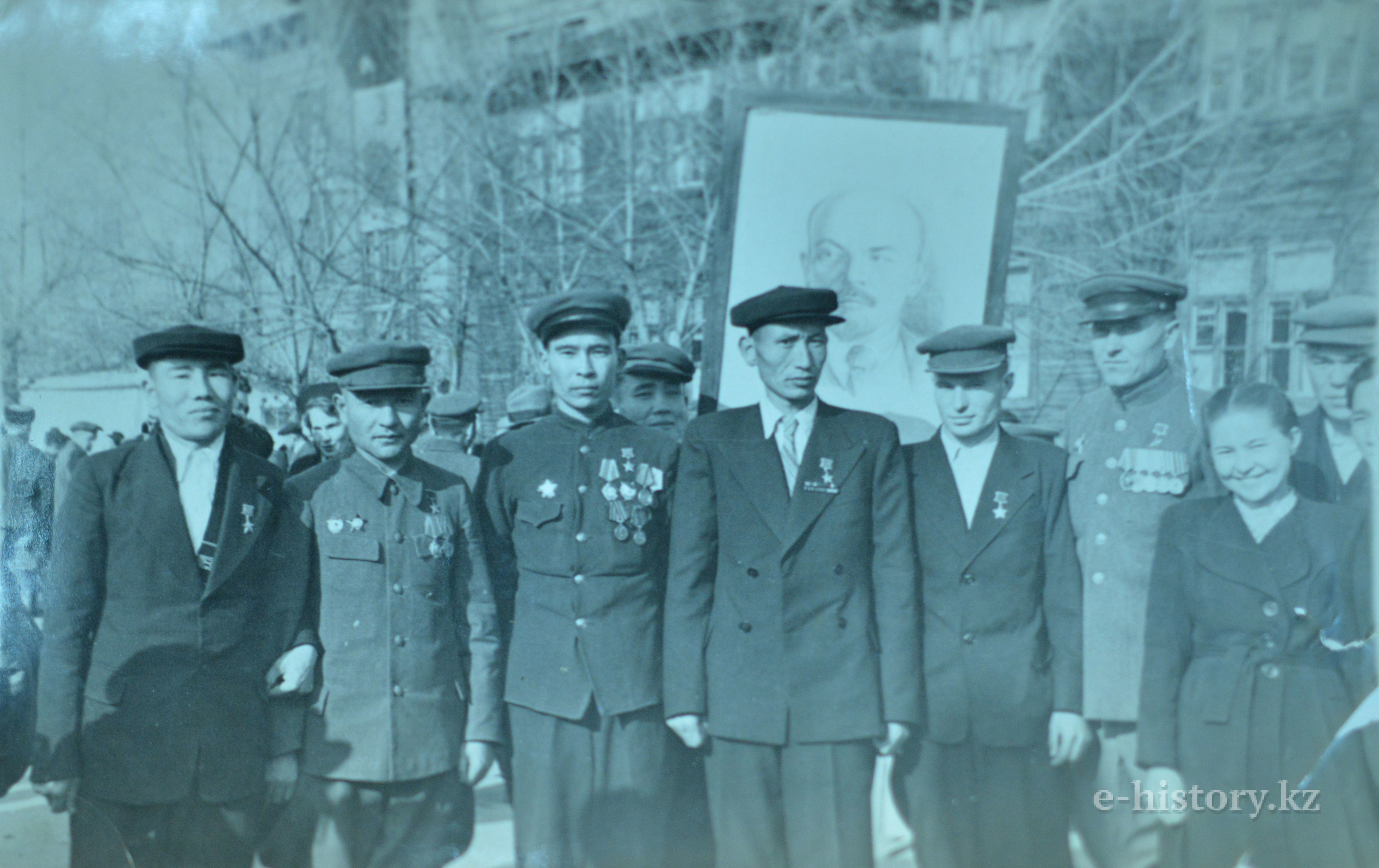 May 1st demonstration
In 1945 he returned home, studied for 2 years in the party school and worked at the Philharmonic in Alma-Ata. 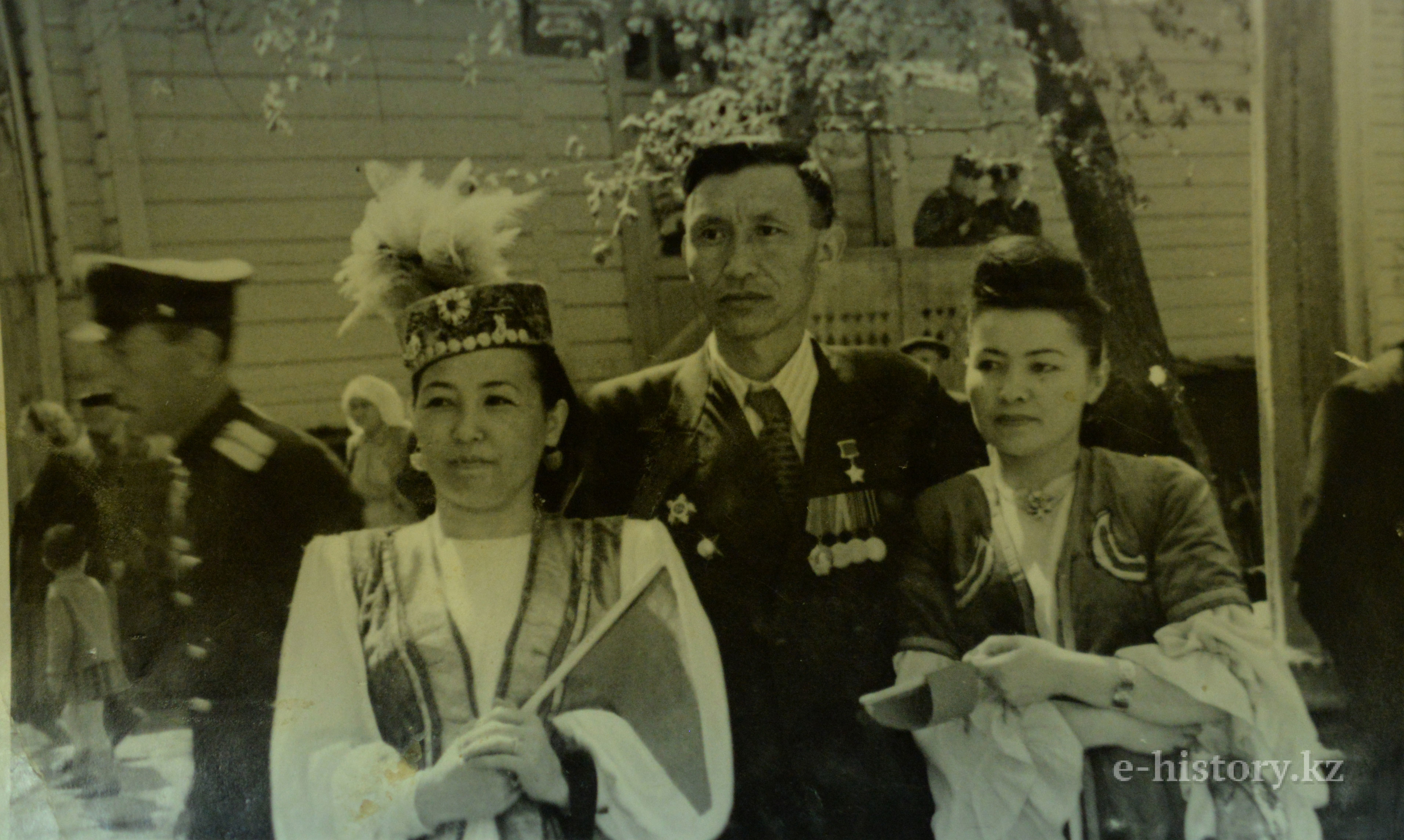 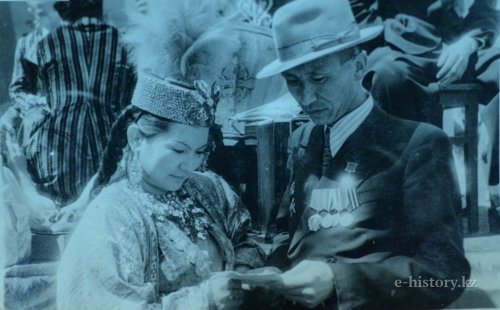 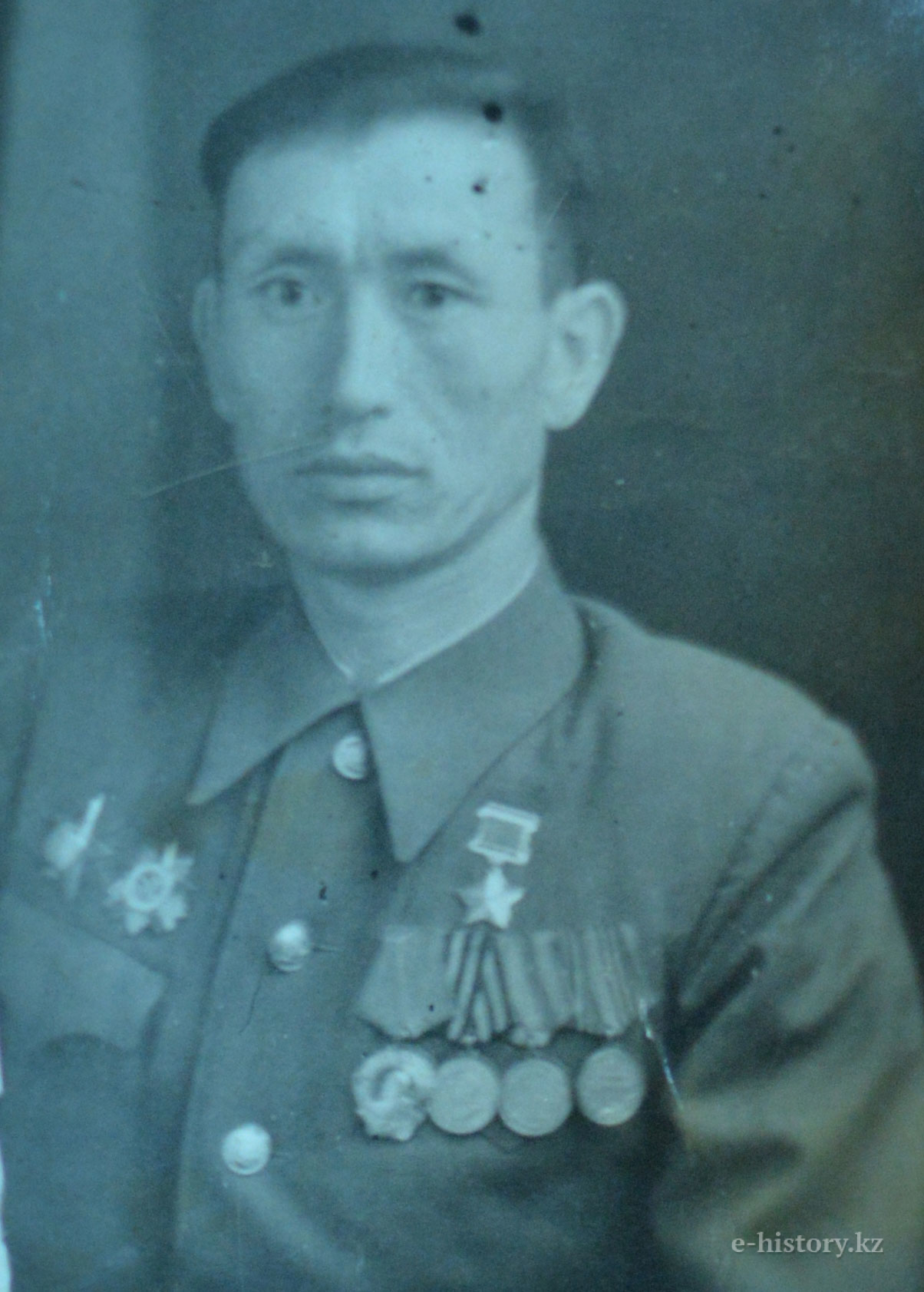 After-war photo of Khamit Kobikov
- In Almaty at the factory of the Kazakh railway the old masters told that they knew my father and constructed from the heart the soldier, without any luxury board in his honour.
His family, close people keep the fair memory of their grandfather-hero, who could turn 100 years on the eve of the Victory Day in the current 2016 year.
Khamit Kozhabergenovich lived not so much, in fact, till 1973, but had time to leave a worthy and significant track in the history of his country and family of Kobikovs.
By Malika MURSALIMOVA
Use of materials for publication, commercial use, or distribution requires written or oral permission from the Board of Editors or the author. Hyperlink to Qazaqstan tarihy portal is necessary. All rights reserved by the Law RK “On author’s rights and related rights”. To request authorization email to mail@e-history.kz or call to 8 (7172) 57 60 13 (in - 1163)
Қазақша Русский English
MOST READ
Month Year
Kunaev Dinmukhamed Akhmedovich
History of pandemic in Central Asia Kazakh dissidents: Amangali Kenzheakhmetuly, known as the “Gang” The excavation works in the town of Syganak Living for the Kyrgyz account A death of Ulugbek Heroic mothers of the great steppe How had the World War II been started? 14 monuments at Tekturmas The rural akims: the country's hope is in the elections Philosophy of the Emblem Stolypin about the worries and hopes of immigrants to the Kazakh steppes Kazakh historical drama Tomiris premiered in Istanbul

Materials on theme
HISTORY BELONGS TO THOSE, WHO STUDY IT
Astana is the first successfully implemented a strategic idea of our country - Nursultan Nazarbayev
Shymkent – the most ancient city of Kazakhstan
At the word “Asian” their hair stood on end