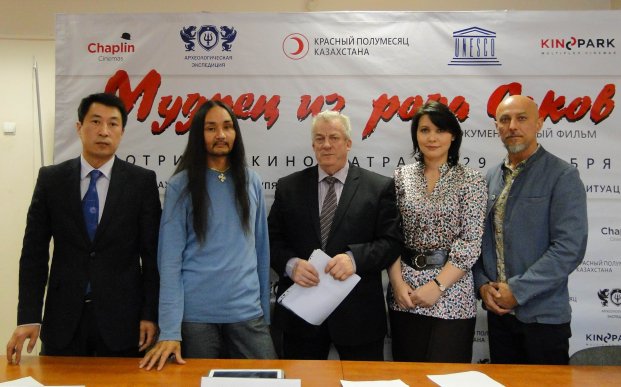 “Sage of Sakas” – a documentary film in the plot of which the scientific research of Kazakhstani archeologist Arman Umarkhodzhiyev on the belonging of the legendary teacher Buddha to the Sakas.

Actually, the thought about the belonging of Buddha to Sakas, as the film creators note, is not new. Such suggestion was expressed by many scientists. Buddha’s spiritual name — Shakyamuni, according to one of the versions, is translated as the “Sage of Sakas”. However, no one could prove that hypothesis with the help of accurate scientific data.

The research expedition to Nepal consisting of a producer, project author, archeologist Arman Umarkhodzhiyev and historian, researcher of the Tengrianism Arman Nurmukhanbetov allowed to create a film in a rare for Kazakhstan genre of scientific-popular film.

The main aim of the expedition became the search for the representatives of Shakya, the descendant of which stood out to be Buddha himself, for the conduct of the DNA analysis. The given genetic data consequently had to define where the ancient ancestors of modern Shakya came from. Initially the purpose of Umarkhodzhiyev and Nurmukhanbetov was not the creation of the film, they only wanted to conduct the important scientific research, but gathered ethnographic material about Shakya’s life, their traditions and religious views gave the cause to think on the screen adaptation of the work business trip.

We addressed to Alesa Dranitsa who created the film play on the basis of our data, told Arman Umarkhodzhiyev. — The producer of the film was Aleksandr Drozdov, operator — Rustem Kaliaskar.

During the expedition the researchers visited there Nepal cities — Kapilvastu, Lumbini, and Kathmandu. — As it is known, Nepal not long ago went through the destructive catastrophe. In connection with that the great number of the monuments of ancient architecture, which we managed to capture, nowadays does not exist, noted Arman Umarkhodzhayev.

By the way, the participant of the given expedition Arman Nurmukhanbetov is the son of the Kazakhstani archeologist, the pioneer of the most famous finding under the name “Golden man” by Beken Nurmukhanbetov.

— Yes, for the last time it is fashionable in the outburst of patriotism to prescribe everything to ourselves, but we are far from that thought, Arman Nurmukhanbetov said, simultaneously showing the photographs with the picture of various places and items characterizing the Saka culture, made in Nepal.

— Here is the cup in the Buddha temple, one of the elements of which coincides with the element of costume of the Golden Man, musical instrument of sarangi reminds the kobyz, tens and hundreds of the images of pointed headwear are peculiar for the Scythian-Saka civilization, and here you can see the oven tandoori, similar to our tandyr oven...

The population of Nepal is 29 million people. All of them are divided into 100 ethnical groups and 60 groups of people. Genetic analyses were taken from three representatives of Shakya of the jeweler Dzhitendry Shakya, lama Gyan Kyadzgi Shakya and scientist Milan Ratna Shakya. After the conduct of the genetic tests it was set that Milan Ratna Shakya and his ancestors were from the indigenous residents. Haplogroup J2, to which he belongs, it is peculiar for the whole population residing on the territory of India, Nepal and adjacent states.

According to the geneticists’ implications, Dzhitendra Shakya and Gyan Kyadzhi Shakya belong to the Haplogroup O3 with the marker M117.

Such genetic code is closer to the Mongolians of the eastern part of Mongolia. Besides, the related of the given line are met also among Karakalpaks and even Kazakhs, in particular, representatives of the Naimans. Yes, three DNA analyses are not enough represented to make final conclusions, said Arman Umarkhodzhiyev.

- All the expedition was carried out because of our personal initiative and for our means. We hope that our discovery will be the object of interest for the state that will allow to carry out a deeper expedition. At the same time the scientific head of the expedition, archeology professor, doctor of historical sciences Viktor Zaybert noted that for science not the quantity but the fact and then the process of his further study is important.

Materials on theme
Cultural walk: State Archive of the South-Kazakhstan region
FEBRUARY REVOLUTION: A VIEW THROUGH THE CENTURY
Astana is the first successfully implemented a strategic idea of our country - Nursultan Nazarbayev
Interview with organizers of the exhibition “Names from the battlefield”