The revival of traditional archery in Kazakhstan 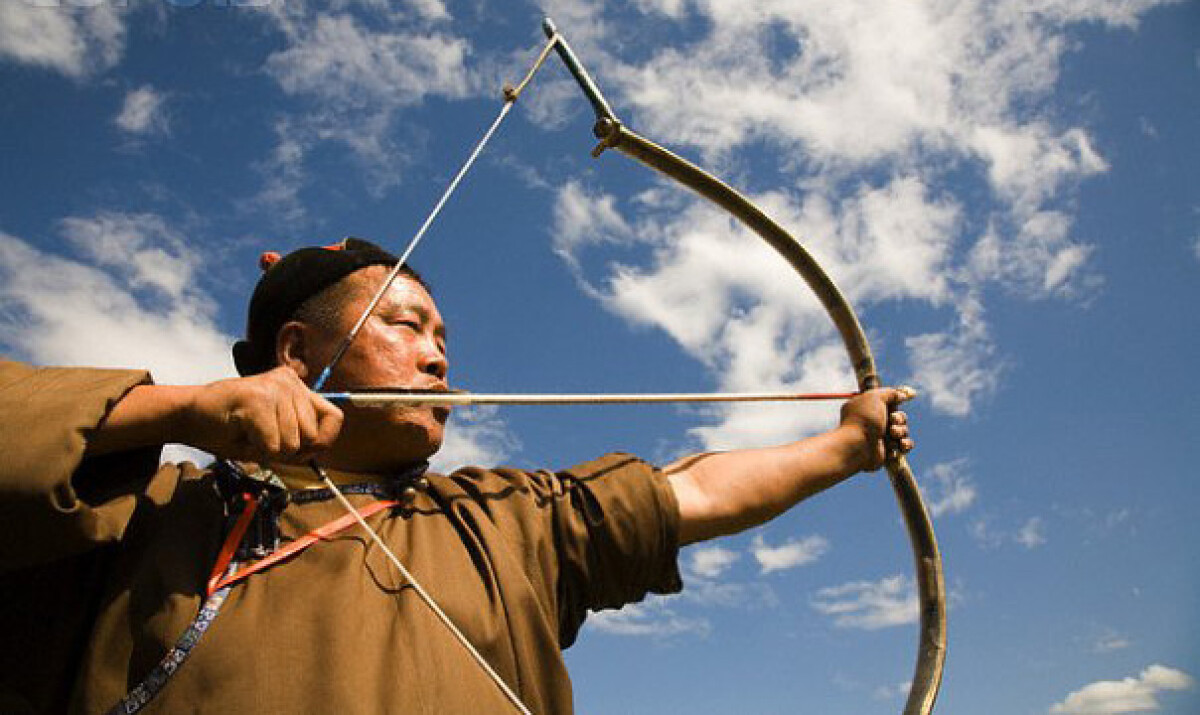 In ancient times sized all possibilities of projectile weapons that allowed them to forage for food and to win in battles. Now bow and arrows are idle entertainment, kind of sport and philosophy

Only in rare cases is hunting. The history of bow creation extends hundreds of years and each nation relates to this type of weapon.

The use of arrow has played a significant role in the history of nomadic civilization. Probably, since the invention, bow and arrow became one of the main weapons of many Turkic people. This martial art is revered in many countries of the world. Who has ever hold an arrow in his hands, even the most primitive model made by own efforts from the bent branches of a tree and stretched nylon thread, will have never forgotten that burst of power and excitement. Probably this feeling has led going further and improve skills. Over the time, the child’s play turns into the hobby and is filled with deep meaning.

Shooting a traditional bow is a popular sport in Europe and Asia. Annually various international competitions and tournaments with the best archers of the continent are held. Such events arouse huge interest among the participants of the competitions and observers. It is a real costume show, because according to the rules, every archer must be clad in the national clothes or historic battle suit.

The use of advanced models of bow and various bow accessories, aiming device and balancers are not allowed. Bow and arrows must be made of natural materials with abidance by traditional technologies. All traditional bows are identical, as they have one origin. All of them originated from early Scythian, Hunnish bows. Just over the time, something has improved and changed in construction. Horns, sinew, wood and animal glue are used in the manufacture of this ancient weapon. The bowstring is mainly made of silk, but it is allowed to replace it with synthetic analogs.

Both simple and composite or complicated composite bows can be considered as traditional ones. Shooting with a traditional bow is still considered the pinnacle of craftsmanship. It wakes primitive instincts of the shooter and gives incredible keen sense of fair shooting. Modern technologies used in block and sport bows, which simplify the process of shooting do not work there. Everything depends on shooter’s training and condition of the bow. Until recent times the traditional bow has virtually disappeared in Kazakhstan. The technology of manufacture of this kind of weapon was lost. This type of martial art has its next revival with the enthusiasts’ efforts.

Rafael Tulegenov is one of those who is actively engaged in the development of this sport in Kazakhstan. He spontaneously came to this hobby. The desire to bow and arrows did not come in childhood, but in adolescence. About five years ago he had a desire to make a bow. Primitive weapon was made of elm twigs; he used nylon thread instead of string. But Rafael Tulegenov did not stop on the achieved point and decided to make a real wood bow in the full height of the man.

-I began to look for the drawings on the Internet,-he said. I found resources with the necessary information. However, all literature was in English. There was not any information in Russian or Kazakh languages. I learned English language for this purpose.

By virtue of inquisitive mind, Rafael Tulegenov has studied almost all evolution of bow creation. He turned to composite material from the primitive wooden materials. When he made his first wooden bow, the unforgettable excitement conquered him. Then he realized that he has done something significant for himself.

Rafael made his first arrows of pine, but soon he realized that this material was not durable, it broke quickly. Then he gradually began to use bamboo and combined with wood, it resulted as very durable ammunition. The specialist did not with production of the ancient weapon, he began to shoot and improve the shooter’s skills. When Rafael looked for the literature on bow manufacture through the Internet, he got acquainted with people who have been involved with this type of martial art. They began to communicate actively. He began to show good results as a beginner archer and shared it with his new friends, they helped him to apply to participation in the international competition in Turkey.

-Performing abroad, I have noticed that foreigners are very interested to get acquainted with our culture closer. Some of them did not know about such nation as Kazakhs. They knew that Kazakhstan is the land of Nomads and probably there people can shoot from the bow. It was discovery for them, that there are archers in Kazakhstan too. It was interesting to see how they look like, how they shoot,- shared the impression Rafael Tulegenov.

It is expensive to be an archer in our time. I made my outfit myself. I have styled boots, Kazakh national chapan and a belt. When I was making my outfit, I studied historic books and went to the museum. There I put attention to the armament and clothing of Kazakh people. My equipment looks more flamboyant with the ornaments and design rather than grey outfit of Europeans,-said an archer.

The culture of development of bow shooting in Kazakhstan is still on the beginner level. However, people gradually became to get interested in this kind of sport. Many people try to master the making of the weapon. Only a few people are involved in this laborious process. It is not complicated to promote traditional archery among Kazakh people.

As head of Nomadic civilization foundation Batyrzhan Seidomar has noted, archery is very interesting for children. The attention of Federation of national kinds of sport is paid to horse archery.

The Second International Archery Festival «Altyn mergen» is hold with the efforts of Rafael Tulegenov and Foundation of Nomadic Civilization in Kazakhstan. The shooters team who participate in international competitions gathered. The largest of them are held in Korea, Turkey, Hungary and other states.