Home News Who is real father of Aisha Bibi?

Who is real father of Aisha Bibi? 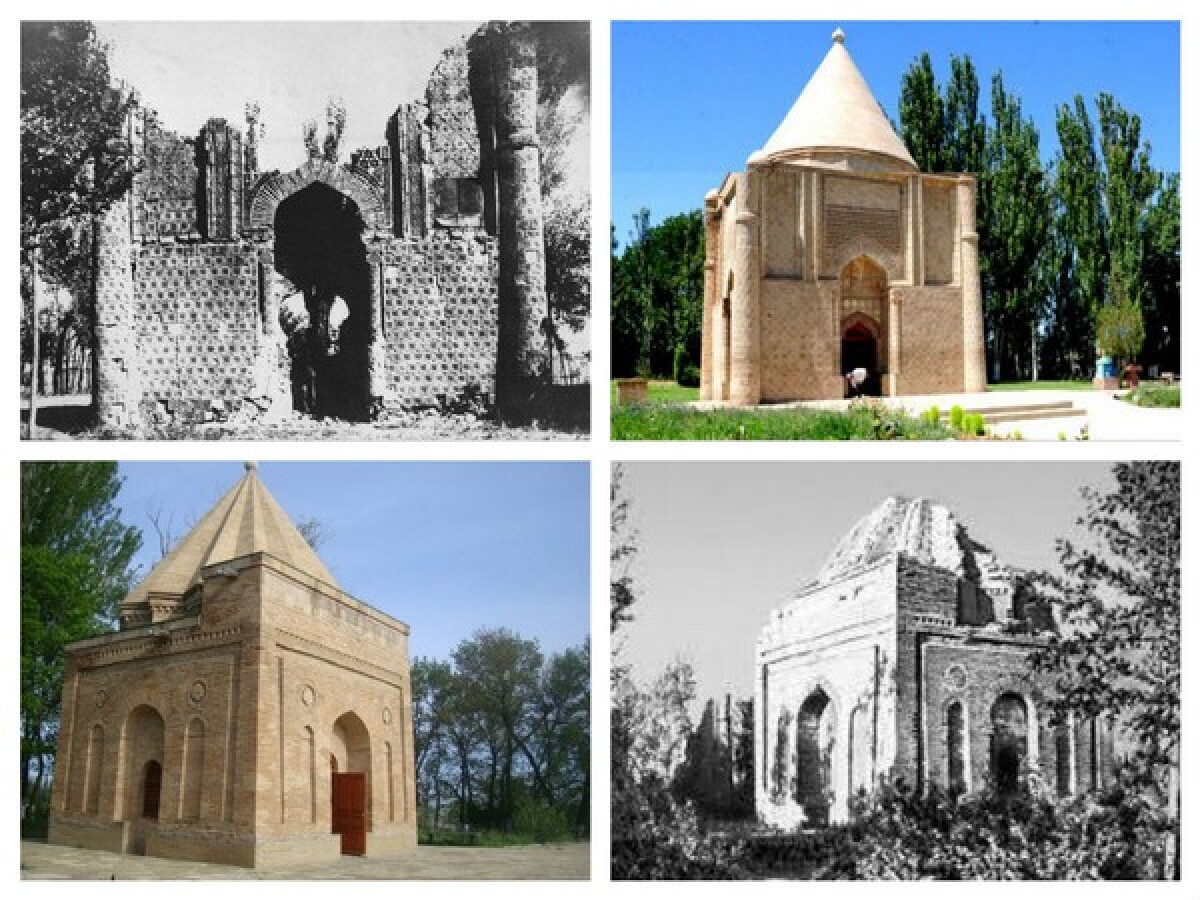 Such people as Tumar, Zarina, Begim, Bopay, Karashash, Domalak, Abak, Aiganym, Kunbike, Zere, who showed their love for the people and the earth with love, heroic deeds and beauty, are also known to the present generation.

How many names of wise mothers preserved the legends of the people? One of them is Aisha Bibi and Babadzha Khatun. Today, one of the mausoleums that turned into a legend, occupies one of the prominent places among historical masterpieces, is located in the village of Aisha Bibi, 18 kilometers from the city of Taraz. Although we listened to the legends about these women, we did not have to go there. Finally I went to Taraz and visited this sacred place. 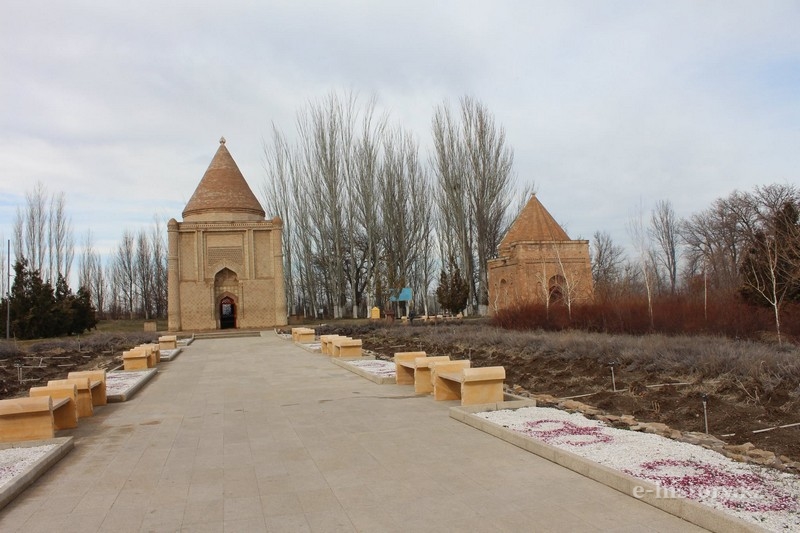 I would like to briefly tell about the mausoleums "Aisha Bibi" and "Babadzha Khatun". In the Х-ХІІ centuries the state of the Karakhanids developed and flourished. The construction of architectural structures began. In the Kazakh steppe, the foundations of the religion of Islam were laid.

Monuments built in the era of the Karakhanids are located in the vicinity of the famous Aulie Ata. Monuments "Karakhan Baba", "Aisha Bibi", "Babadzha Khatun" are true testimonies of the history of that era. Historical "Monuments of ancient Taraz" are part of the museum-reserves. Mausoleums "Aisha Bibi" and "Babadzha Khatun" refer to the monuments of the XI-XII centuries. Ancient relics are located in the current Zhambyl district of the Zhambyl oblast. 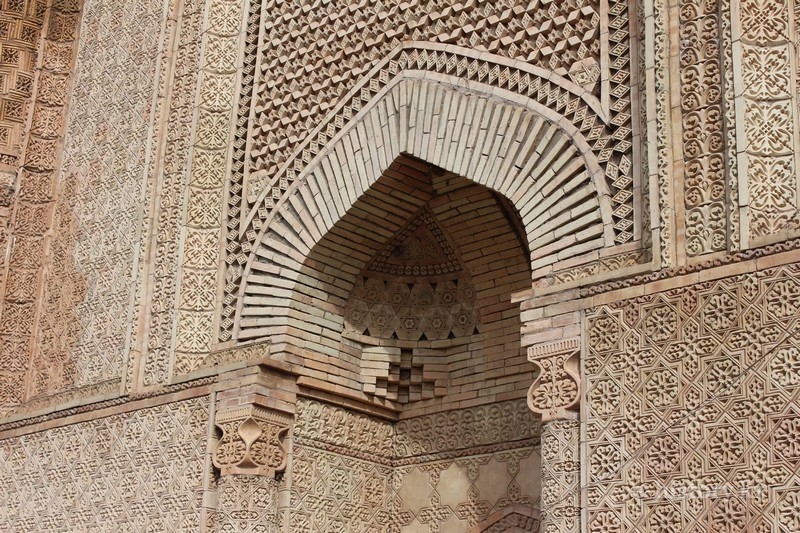 The architectural constructions of the mausoleums "Aisha Bibi", "Babadzha Khatun" are executed in the style of fine arts widespread in the Middle Ages. There on the tiles are depicted drawings of plant and geometric themes; there are framings of 62 kinds of ornament. Mausoleum "Aisha Bibi", considered a model of advanced oriental architectural art, has no analogues in the world. On 18 rows of the corner columns of the mausoleum, in Arabic "kufa" are written mysterious poetic lines "Autumn. Clouds. The Earth is beautiful". It seems that every tile of the mausoleum reveals the secrets of the history of the past. Each image, carved ornament, as it were, expresses the harmony of merges of the old and the new. Although we understand, we see that the mausoleum was repaired and restored, but until today the construction of the mausoleum has preserved its originality in its original form. 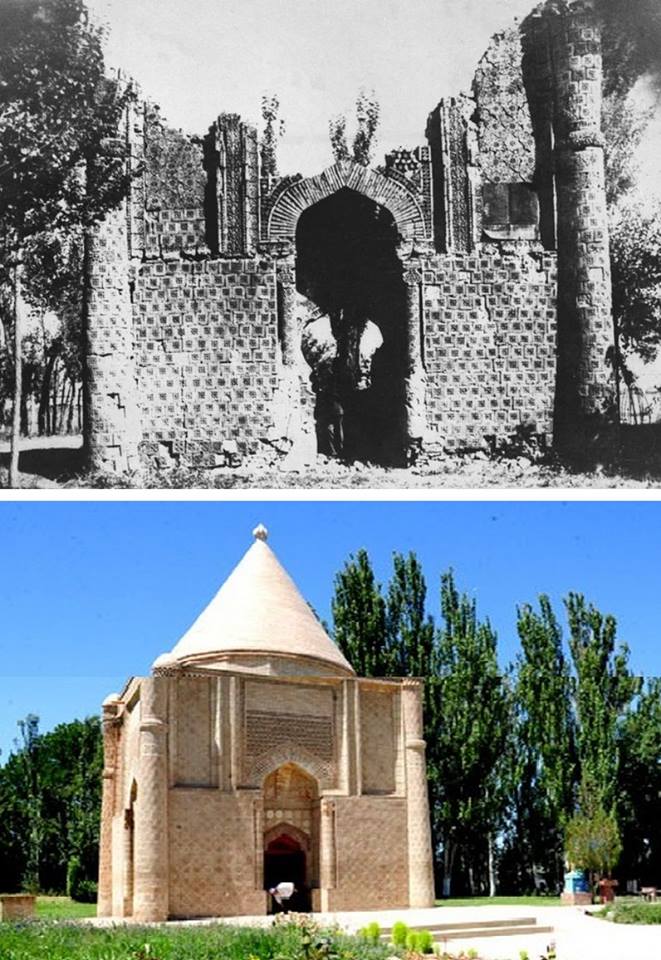 Feature of the main dome of the building - in the form of a female headdress - saukele. Some compare with the symbol of the traditional wedding headwear, others compare this building with the saukele symbol, into which the snake crawled and bit Aisha Bibi. The mausoleum itself is a square structure. Its dimensions are 7.6 x 7.6 meters. The walls of the mausoleum are 80 cm thick. The lateral columns narrow in the upper part of the dome, and the brickwork is decorated with floral ornament. In the center of the mausoleum is a gravestone (3 x 1.4 m). 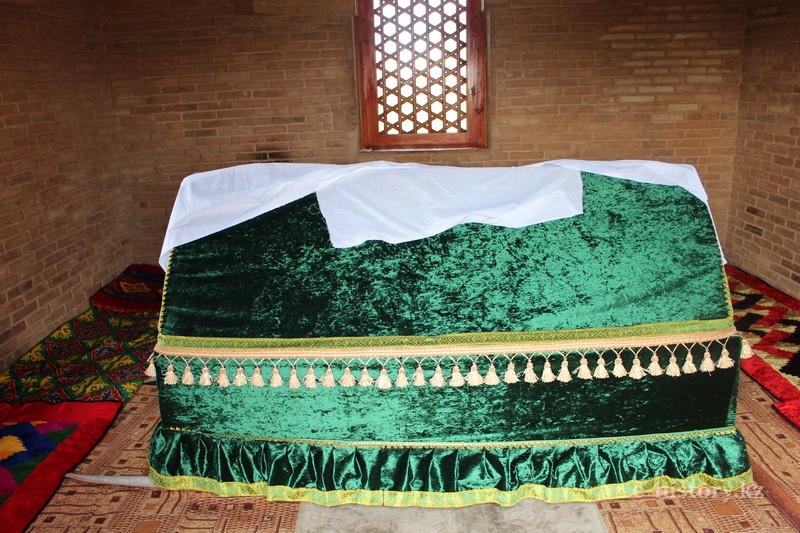 According to one of the legends preserved in the memory of the people, the beautiful Aisha, the daughter of the Sakhab dynasty, known among the people as the holy of the East - Zengi Baba and Anuar Begim, went to a meeting with Karakhan Muhammad - the ruler of Taraz from the dynasty of the Karakhanid Empire of the Western Khaganate. Unfortunately, the groom could not see her anymore, since she died on the banks of the Asa River from the snake bite hidden in her headdress. The mausoleum is near this river.

According to the second legend, Aisha was the daughter of the scholar and poet of the 11th century Khakim Suleiman Bakyrgani, after his death she was brought up by Sheikh Aykozha. Aisha loved the young ruler of Taraz Karakhan Muhammad (in honor of whom the mausoleum of Karakhan in Taraz was erected). Aisha fell in love with the young ruler of Taraz Karakhan Muhammad. Once Karakhan Muhammad asked for Aisha's hand in marriage, but her tutor - sheikh Aykozha did not give his consent. Then the girl cheated and went to Taraz voluntarily to her lover. Then the plot repeats itself, she died on the banks of the Asa River from the snake bite, hidden in the headdress. On the site of her death a mausoleum was erected. 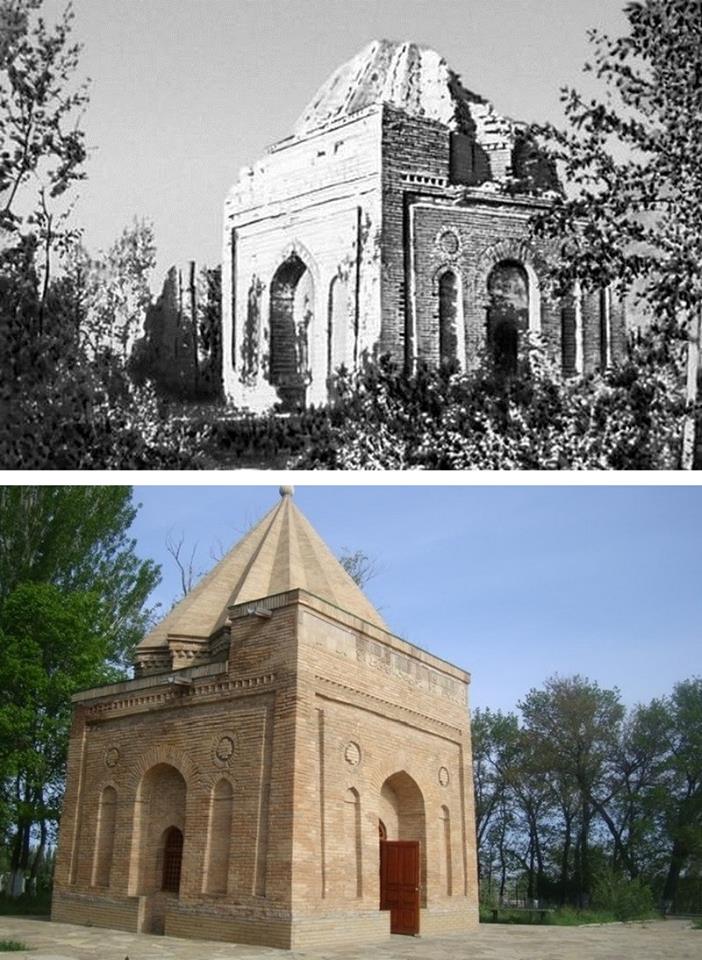 According to other sources, the beautiful Aisha was the wife of Karakhan and the ruler, grieving after her premature death, found the best masters to build a mausoleum of unprecedented beauty over her grave. 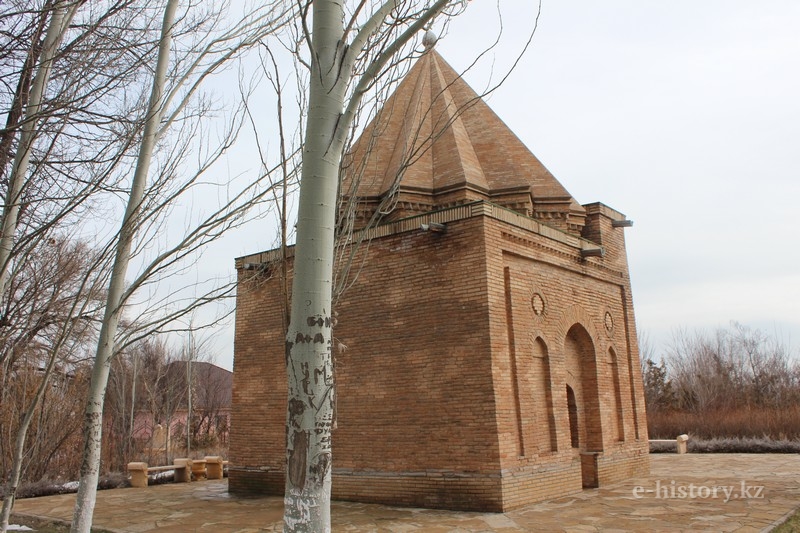 The dome of the grave of Babadzha Khatun has a subcubic form. The architectural composition of the dome is simple. Three facades (except for the western) buildings are decorated with niches and medallions. The planes of the walls of the facades are decorated with false arched windows and niches. Circles of bricks made of curly brickwork are laid out above the windows. Decorative niches and medallions are enclosed in a frame in the form of a letter P. Above the frame is a serrated horizontal strip formed by double bricks rotated by corners to the outer wall. The same stripes run over the top of the parapet and the drum on which the dome is resting. The building of the mausoleum is crowned with a faceted drum, which served as the base for the 16-rib conical dome, which has not survived to the present day. On the front side of the mausoleum of Babadzha Khatun in Arabic it is written "This is the grave of Babadzha Khatun. It was built by ..." 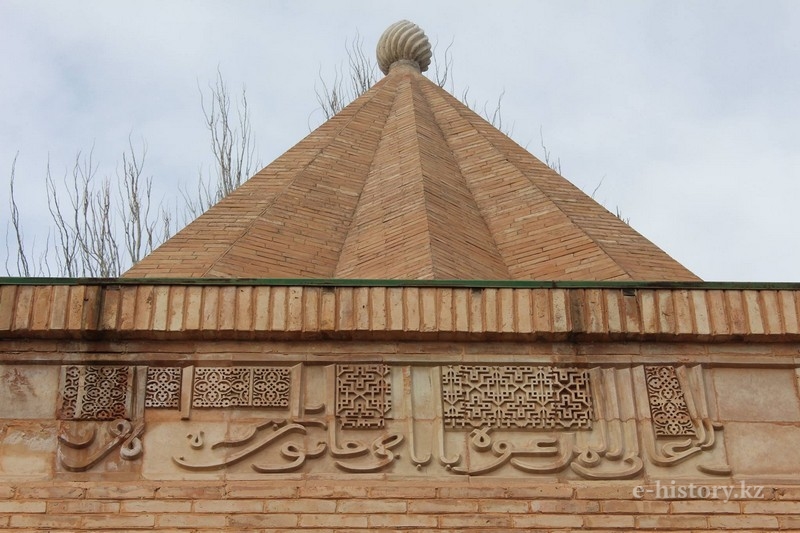 According to historical information, Aisha Bibi appears in the image of the beautiful, clean. Babadzha Khatun was Aisha's companion on her last journey and after her death became the guardian of the mausoleum of Aisha Bibi. The fact that in 20 meters from the mausoleum "Aisha Bibi" is the mausoleum "Babadzha Khatun" means a lot. In 2002, within the framework of the State Program "Cultural Heritage", work was carried out to restore historical monuments. For tourists there are good conditions. These monuments can be proudly demonstrated to other peoples. Acquaintance of the peoples of the world at EXPO-2017 with the monuments of Aisha Bibi and Babadzha Khatun will give an opportunity to touch our national cultural values. There are very few unique architectural monuments in the world.