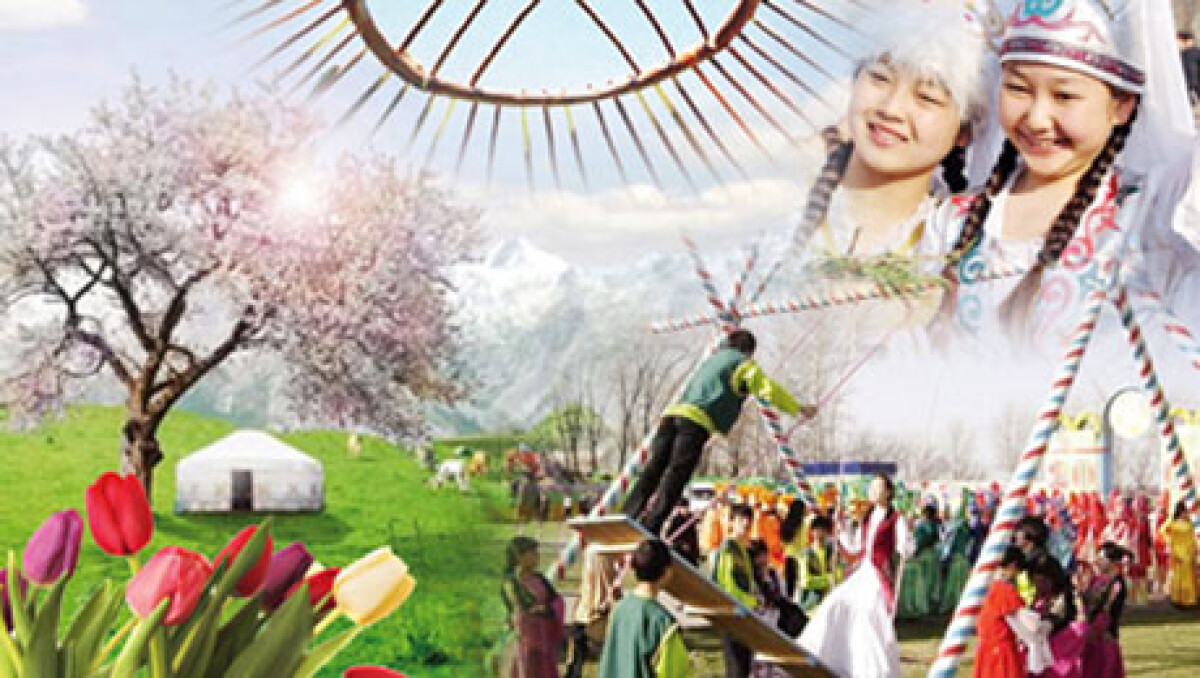 Researchers counted 315 types of National Kazakh games and 500 of national sports. Let's talk about the most popular of them, which are traditionally held on Nauryz

For centuries Nauryz was celebrated traditionally: a rich dastarkhan that adorned the main dish of a holiday – Nauryz kozhe, rituals associated with cleansing and renewal, congratulations and presenting gifts, folk festival and national games.

Traditions of the celebration of Nauryz over the course of time remained practically unchanged. The only thing became difficult to find aryk and plant trees to residents of Kazakhstan cities. And if, in addition to jokes, our people still know how to have fun and rejoice on the day of the onset of spring, renewal of vitality and nature.

Traditionally, the celebration of Nauryz began at dawn. Adult men and women, young people and children under the strict guidance of aksakals gathered together. The men cleared the irrigation ditches, springs and wells, young people and old people planted young trees and wished: "Let the tree remain in the memory of the man, rather than the flock", "Cut down one tree - plant ten!"

After this ritual, zhyrshy-barkers walked around all the yards and streets and invited to the party. Noisy, funny, dressed in colorful clothes, they could appear in the image of the heroes of folk tales. And the celebration began. People went to each other's houses, hugged and congratulated each other on New Year's Eve, wished for good, sang songs that had been performed on this day since ancient times, had fun and arranged festive performances. For example, as a joke, men fought against women, young people competed in tongue twisters and solved riddles.

From time immemorial, the celebration of Nauryz was accompanied by massive folk games and traditional horse running.

On this day, alongside the yurts, it was necessary to install the "Altybakan" - a swing. In the evening, young people gathered around it to have fun and sing songs. They swung in pairs; the guy and the girl at that time were encouraged by songs and jokes. The fun could last until midnight. 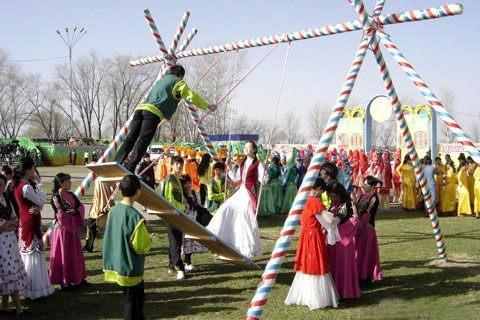 Of course, the most favorite game of guys and girls was folk fun "Kyz kuu", in which the girl runs away from the dzhigit on horseback, and he catches up with her to give a kiss. Not caught up - get slapping under the disappointed hooting of the audience. The girl could cause a dzhigit to compete with the condition that if he wins, he acquires the right to her hand and heart, and if she wins, the dzhigit would fulfill all her desires. Thus, Nauryz could even turn into wedding celebrations. 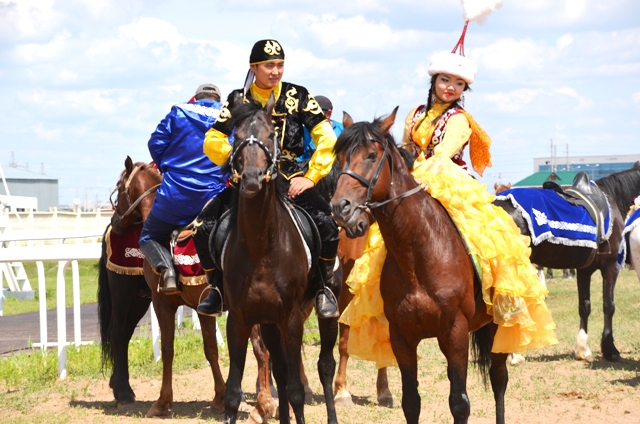 One of the favorite folk games was a comic contest of men and women "Aikysh-uikysh" ("Towards each other"). Young people, old men, middle-aged men and women broke into groups - male and female - and moved a certain distance. The master with jokes called two participants: a man and a woman from each group ran out to meet each other, faced and changed teams. The woman went to the male, the man, respectively, into the female.

Dzhigits on this festive day showed all their strength and agility in horse running. Audaryspak, or wrestling on horses is one of the most spectacular national games. By condition, the riders must pull each other from the saddle. The winner was the one who managed to drop his opponent from the horse. Of course, the dzhigits needed agility, strength and skillful control of the horse. 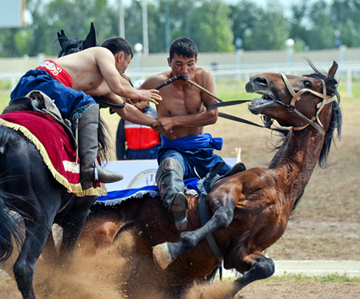 Only skillful and brave horsemen participated in dzhigitovka. At full speed of the horse dzhigit jumps off it and for a split second returns back to the saddle. He lifts small objects from the ground, hangs on a horse and shows acrobatic skits and much more. Do you remember the legendary fighter Baluan Sholak? So, there were no equals in acrobatic skits on the horse. Today it is recognized that the kokpar and the dzhigitovka are not inferior to the Spanish bullfight.

Kokpar is a test of strength, accuracy and skill to adhere to the saddle. On the open site gathered the participants and the audience. At a distance of 50-60 steps from the riders was thrown the goat carcass, at the command all the participants rushed to it. Dzhigit, the first to take the carcass from the ground, tries to come off as far as possible from his rivals. But he was caught up and the real fight begins. Often up to 20-30 people attack the captive carcass first, and then you need not miss the chance and take away the kokpar. The match could last until the evening, and then the winner had the right to ride with the kokpar in the yards, show the prey and get gifts and treats for it. 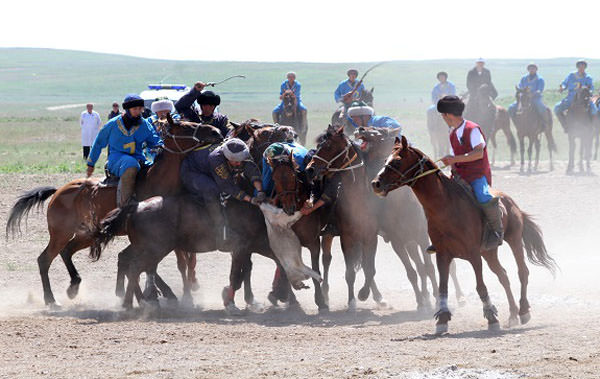 Equally popular equestrian competition than kokpar, was baiga. Who is faster from the riders to the goal, he became the winner. This is a real test for both dzhigits and their horses. There are different types of baiga depending on the distance. Jumps for long and super long distances are called Alaman baiga. Everyone knows the story of Kulager tulpar, which became a legend. He won all the competitions and the glory of him went far beyond the Kazakh steppe. 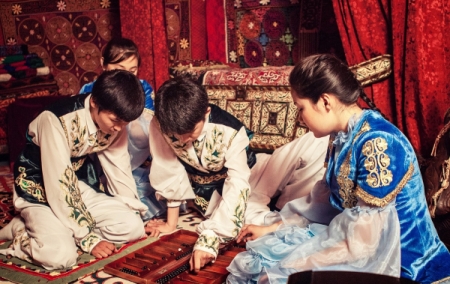 The game "Togyz Kumalak" is one of the oldest; the researchers also call it "shepherd's algebra". For the game board sat two participants, they needed to have a high counting speed and to own tactics, logic, ingenuity, mathematical thinking and endurance.

The first day of the celebration of the spring came to an end with aytys. Akyns, who competed in the craftsmanship, brightness and imagery of their songs, personified good and evil. With the setting of the sun their voices fell silent, a big fire was kindled. With torches lit from it, people walked around the village, sang songs, and danced. So Nauryz holiday was over - the day of spring renewal and equinox.