Tours by the museum's halls 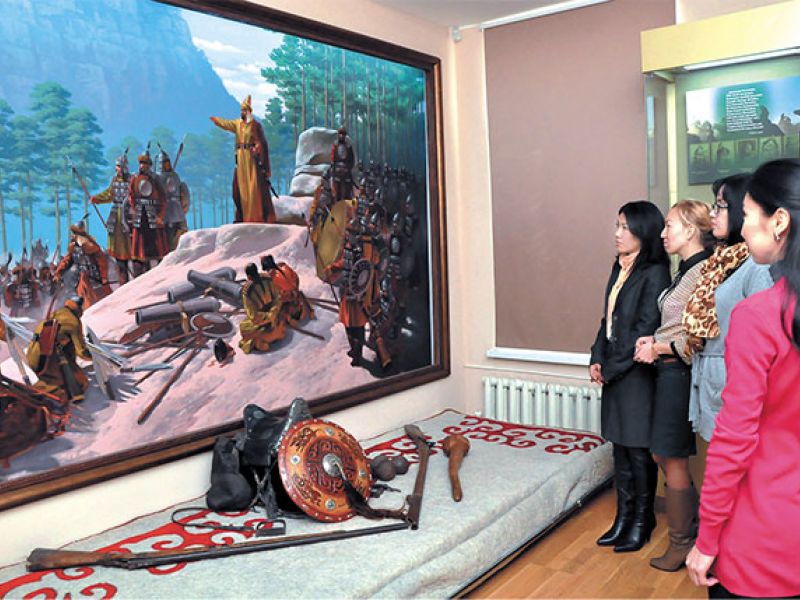 Abylay Khan's exceptional role in the history. There is no more honored and great ancestor than he, so everything about his memory is sacred.

Kokshetau was the favorite nomadic camp of Abylay Khan. An outstanding educator Shokan Ualikhanov in a study of his great-grandfather Abylay Khan, often mentioned, he wriote: «Abylay returned to Kokshetau, to his favorite nomad camp, near the Siberian line…«Citizens of Kokshetau love and proud of their great ancestor and aspire to be like him. They name children after him, honor, celebrate, and perpetuate in granite on canvas, gather the crumbs of his life associated with historical materials, style exhibition in museums.

And now we’ll go on a tour to the regional historical museum in one of the halls, called «Abylay Khan’s World», opened especially to 300th anniversary of the outstanding statesman, whom history has put as of the most influential rulers of Central Asia of 18th century. The tour led by senior researcher Tatyana Markevich, who investigated historical documents associated with his name. These documents witness that blessed land of Kokshetau inseparably linked with Abylay Khan. Here many years located the headquarter of Great Khan.

In the center of the hall located the Great Khan Abylay himself, appeared in image of stunning painting. In this image shown how he’s on the hill by the «stone throne» — the legendary natural attractions, is drawn with an appeal to his peers, who returned from a hike. Artist Bahytzhan Myrzahmetov in his work «Great Commander Abylay» created an image of a young, courageous commander, with indomitable will, as a symbol of freedom-loving spirit of the people. Brave commander depicted in armor breastplate with hallmark Genghis Khan’s descendants on thoroughbreds, under the banner of their military. There is unique feeling after what have been seen, it seems like there is a presence of the Great Khan, his energy…

In the exposition of the hall shown reconstruction of original things, which were appropriate to the historical conditions of Abylay Khan’s era, — clarifies tour guide. Also there are unique historical relics of Ualihanov’s tribe, authentic Kazakh’s household stuff. The main symbol of traditional Kazakh statehood was stamp of khans and sultans. They were made mainly in the form of large silver rings with an elegant script of the Arabic text. All letters always end with the same expressive phrase: «and to prove this here is my stamp». In the hall represented signet of Abylay Khan, near to there is an image of ring’s print. In the display cases shown the scepters of Kazakh ruler, exquisitely decorated weapons and ceremonial cloths of the representative of Kazakh aristocracy, consisting of headdress and shapan (outerwear), many authentic objects and military field equipment of horseman.

Viewing the exposition, unwittingly plunge into the world of the Great Khan, those things which he lived with, to what he dedicated his life, himself and what he dreamed about. His personality was very versatile. He was passionate play on the dombra, with which he never was apart even in campaigns.
There is an example of ancient folding dombra, traditional for Sary Arka. Such dombra had Abylay Khan. It consists of two parts: the body and the neck, which can be dismantled and folded in a travel bag.
Dombra represented in museum made by our countryman, the master of Kokshetau Serik Sarsenbayev. Here we also learned that there are about two dozen of instrumental melodies, the author of which was Abylay Khan. Museum’s hall provides insight into of Khan’s state activity aimed at preserving the independence and territorial integrity of the Kazakh land. Farsighted and wise politician, contributed to the expansion of economic trade relations with other countries, Khan Abylay implemented independent domestic and foreign policy, established diplomatic relations with Russia and China. The evidence for this was the copy of the letter submitted by Abylay Khan to Qing Emperor Qian-Lun, as well as letters to representatives of the Russian administration.

The layout of the mausoleum of Khoja Ahmed Yassawi, the magnificent architectural monument, which became the burial place of influential Kazakh rulers, including Abylay Khan is impressive. Nearby, in the window, located a copper cauldron, decorated with filigree oriental pattern made in Turkestan, presumably at the end of the 18th century.

Significant place in the exhibition dedicated to the famous descendants Abylay Khan. Visitors can see the historical relic — shapan Shyngys Ualihanov great grandson Abylay Khan, son of Khan Wali, a senior Sultan Kokshetau District. According to legend, the gold-embroidered shapan, was given to Shyngys Ualikhanov by Tsar Alexander II in 1855 in St. Petersburg. Another unique exhibit — sholpy, silver jewelry for indirect, consisting of three medallions and pendants inlaid with turquoise, owned by the niece of the great Kazakh scholar Shokan Ualihanov — Zeynikesh (Zeynep).

The final part of the exhibition hall of the museum is dedicated to perpetuate the memory of a great statesman. His name avenues in the cities of Astana and Almaty, Kokshetau in his honor were established memorials and monuments. Exceptional role in the history of Abylay Khan is that there was no more honored great ancestor, therefore everything related to his memory is sacred. His idea of unity of the people came to life in today’s Kazakhstan, therefore Abylay today is not just the name of the famed Khan, but a symbol of unity and independence. As President of Kazakhstan N. Nazarbayev said in his book «In the stream of history»: «The unity of the people’s will was embodied in Abylay Khan. Abylay Khan’s feats as combiner, which together with hero performed miracles of heroism, became one of the pillars of the revival of the Kazakh spirit».