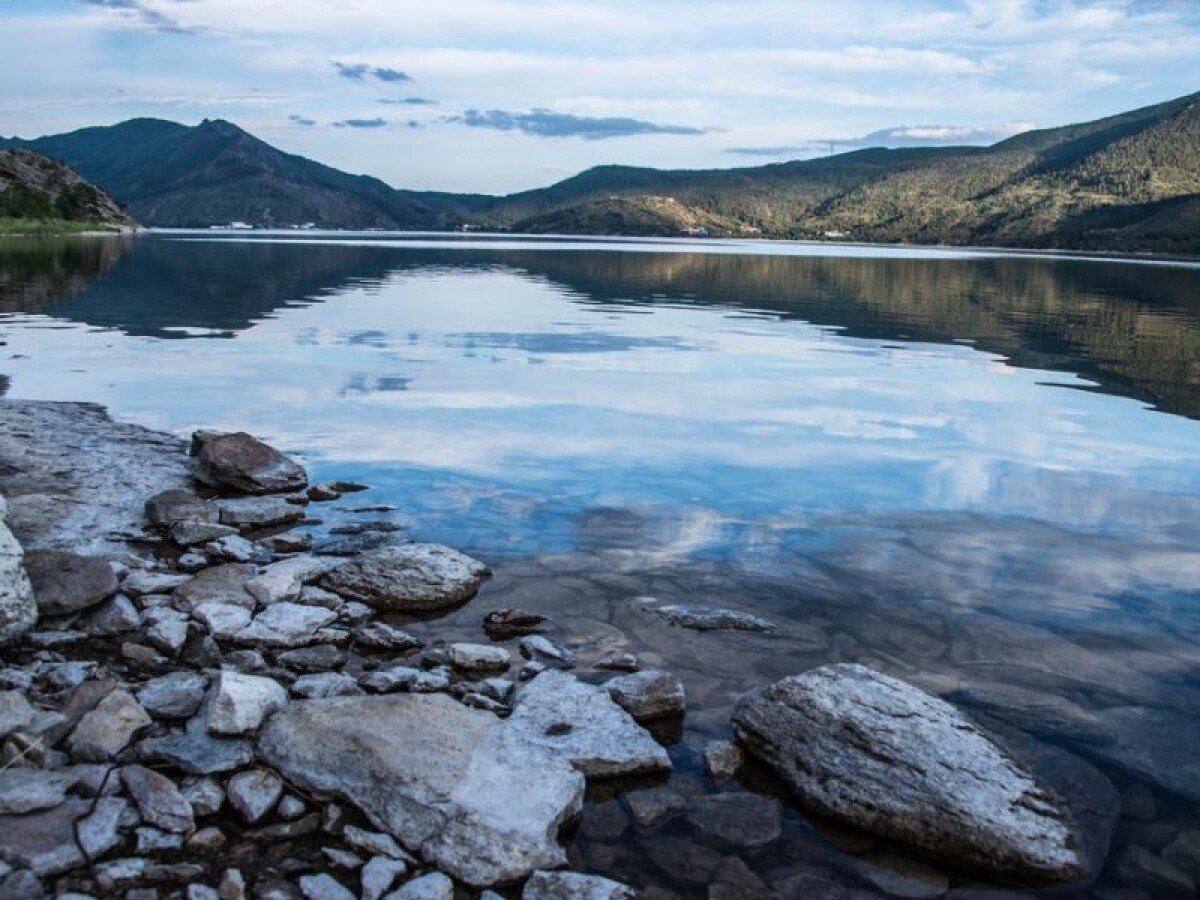 Bayanaul National Park was founded in 1985 in the Bayanaul region of the Pavlodar region. Its area is 50,688 hectares. According to the physico-geographical zoning the territory of the park is

included in the Ereimentau-Karkaraly. It is a region of moderately dry and dry steppes with a pronounced high-altitude belt.

The relief of Bayanaul mountains is distinguished by a peculiar longline structure. The main areas are occupied by a rocky and hilly melkosopochnikom with absolute heights up to 450-700 meters and denudation plains. The watershed parts of the mountains are in places leveled, with platforms, often dissected by longitudinal and transverse valleys. To the south, the mountains decrease somewhat and gradually move to even lower parts of the melkosopochnika. The highest point of the Bayanaul massif is the peak of Akbet (1027 m above sea level).

The main geological rocks of this territory are coarse-grained granites, porphyrites and quartzites. Shale and sandstone are less common. The ancient sedimentary strata covering them were almost completely washed away. Rock rocks in the mountains are steeply set and form sharp peaks and numerous granite outcrops of the most bizarre forms. The thicknesses of various rocks moved intensively during the prehistoric periods of mountain building, when ancient mountain constructions arose. The prolonged destruction of these structures has turned them into low mountains and a vast plain - an ancient peneplain with island mountain ranges composed of the most stable rocks. 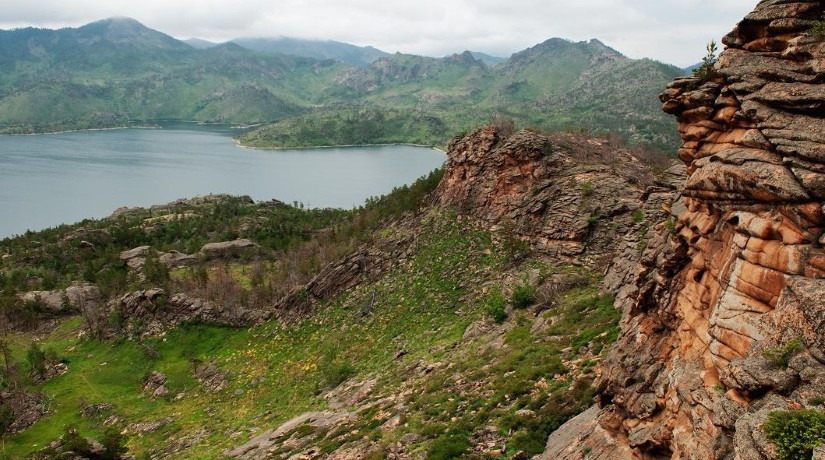 The oldest granite rocks are still gradually being destroyed. Their surface, cracking, turns into a small grit, which is carried away by water and wind. Such a phenomenon is usually not only for Bayanaul, but for all low mountains of the Kazakh melkosopochnik. Sometimes large caves and even large caves are formed. The most famous is the cave Aulie-Tas, located north-west of the Zhambak cordon. Its length is 30 meters, the width is up to 2.5 meters, while the height is 5-7 meters. The Bayanaul Mountains are rich in deposits of non-ferrous metals: copper, lead, molybdenum, nickel, cobalt, gold, titanium, antimony, silver. There are also other rare metals and dispersed elements. Within the mountains there is a dense network of shallow valleys and lairs with a temporary drainage formed during the period of spring snowmelt. On the small rivers there is a constant flow. At the same time 70-90% of it falls on one and a half to two and a half weeks of the spring season. After this, the rivers become extremely shallow or completely dry out.

The surroundings of the Bayanaul mountains are as amazing as the location of this mountain massif. Here, between the rocky mountains and pine groves, four freshwater lakes hid: Sabyndykol, Zhasibayskoe, Toraigyr and Birzhankol. It should be noted that in addition to them there are many small lakes, the history of which is silent about the occurrence. The origin of all these lakes is associated with the impact of a cycle of powerful streams of water descending from the mountains into small rivers that flowed into the earlier wetter epoch at the foot of the Bayanaul massif. 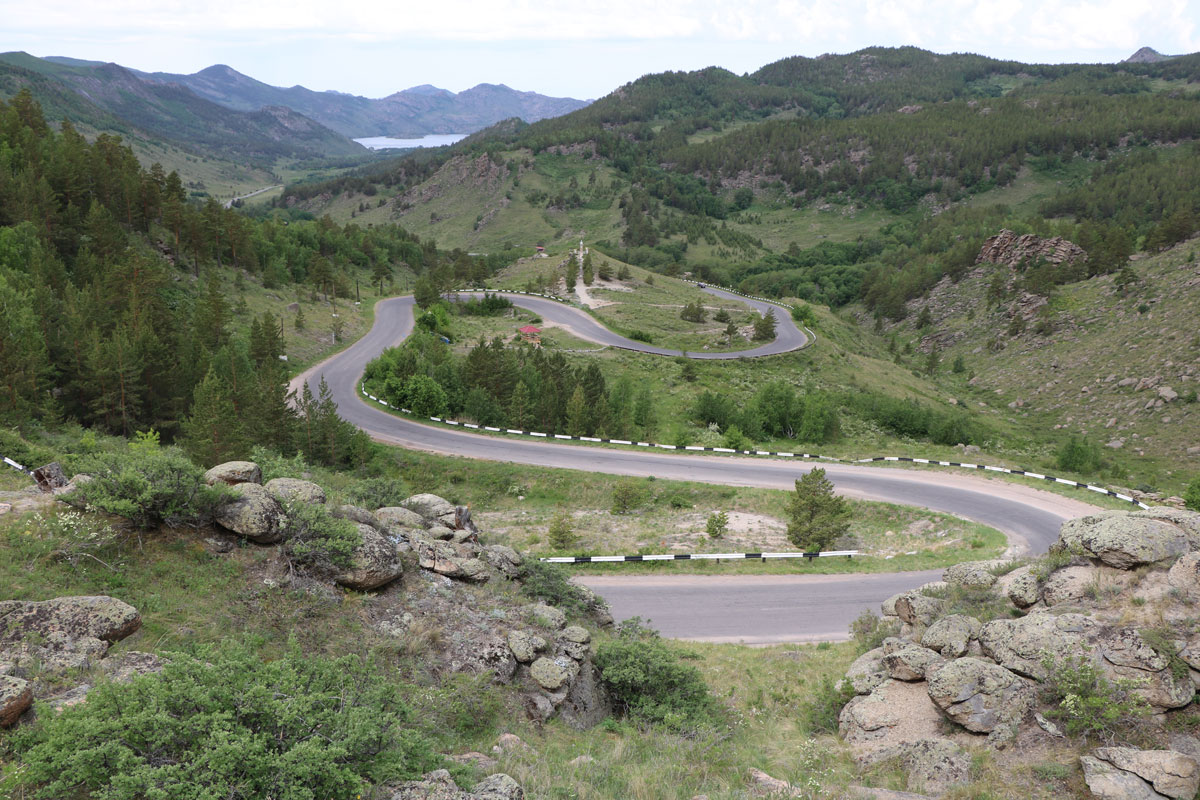 A very favorable factor for the formation of deep lake depressions was the accumulation of large granite granites. The depth of Sabyndykol lake is 10-13 meters, while Zhasbai lake - up to 7 meters. The shores of the lakes are very picturesque, in the middle of many there are small rocky islands. Lakes are nourished here in a large number of anonymous mountain streams, which during the hot summer can dry up. In addition, often there are mountain keys with water of excellent taste qualities. Some of this region attracts its blue lakes, others - rich flora and fauna, and the third - the power of the wind, which sculpted fairy-tale characters in the vicinity and exotic caves. This unique mountain range with all adjacent territories is listed in the list of specially protected natural sites in Kazakhstan. The local national park pleases the eyes of thousands of visitors with natural beauty all four seasons of the year.

Many red-listed animals and birds found their free abode on the territory of the park. Among the 50 species of birds and 40 species of park animals, one can distinguish a group of wild game, badger, roe deer, and also archar, listed in the Red Book, as a rare and endangered species in need of special protection. The nine lakes of the park are inhabited by the same species of different fish, in particular perch, pike, black and white fish, etc.

"Bayanaul" is a word of Mongolian-Turkic origin. Its literal translation is "rich, happy mountains". In support of this, we can mention Shokan Ualikhanov, who noted that Bayanaul never knew the general decay of livestock. Weather-protected in the most fodder years (cattle) carried out somehow winter, sometimes feeding on twigs of deciduous trees. No wonder the name of Bayanaul was given to a group of these mountains, which means Kalmyk (Mongolian) means the Free Mountain (Bayan-Ola). The historical traditions of the Kazakhs are also associated with the name of the mountains and the settlement with the name of the beautiful Bayan, the heroine of the epic poem "Kozy Korpesh-Bayan Sulu", which tells of passionate love and selfless faithfulness of two hearts. Nowadays this story is sung in the cinema and the theater. Television, painting and music in one way or another concerned this topic. The famous poem began to be studied in the nineteenth century. She was interested in such famous scientists and writers as V.Radlov, G.Potanin, S.Ualikhanov, M.Auezov. Even in Soviet times, the play of famous playwright G.Musrepov "Kozy-Korpesh and Bayan-Sulu" appeared on the stage of theaters. The great Russian poet A.S. Pushkin recorded one of the variants of the steppe legend, having heard it in his journey through the vast expanses of the Urals. This is one of the most popular poems in Kazakhstan. It has about sixteen options. Relying on the narrative of the writer, poet and local historian D.Priymak, I will briefly tell an ancient legend. 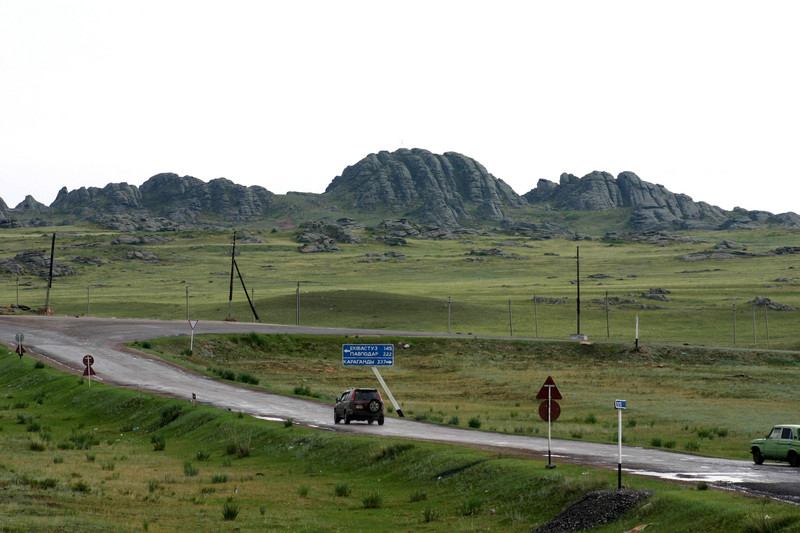 Bayan Sulu's father, Karabay, annually roamed from Ayagoz to Tyumen, making long stops in the mountains of Karkaraly, Bayanaul, Dombraly, Monshakty and others. Bayan particularly liked the mountains of Kazalyk, where there were many black herons with beautiful plumage. From the feathers of these birds she sewed herself a beautiful hat, adorned with the sultan, why the mountains were named Karkaraly (the mountains of the Black heron). In the Kokchetav mountains, Bayan found a wonderful tree, extracting a pleasant sound for the ear. From this tree for Bayan Sulu made a musical instrument - dombra, why the mountain was named Dombraly. On the neighboring mountains there were many precious stones, from which she made a luxurious beads (monshak), why these mountains were called Monshakts. And Bayan herself was a girl of marvelous beauty. The prefix "sulu" - "beautiful" - became an integral part of her name, and the village where the father made the longest stops during the nomadic activities became the favorite place of the youth gathering, and everyone called him Bayanaul. Seeing what glory is enjoyed by the beauty of her daughter, and how big for her to get a kalym, Karaby became firmly in the decision to break the vow and vow given at her birth to a friend Sarybai - to marry the girl to his son Kozy Korpesh. Therefore, with his large herds, he began to move away from the Sarybai family, to new, far-off lands. Yearning for his Saryarka, many relatives and shepherds fought off from Karabay. He remained faithful only to the rich Kodar who was on his way, who began to seek Bayan Sulu's hand. Karabay hesitated - bargained. But when they lost their way out of the desert, the confused Karabay said to Kodar:

- Lead the caravan through the desert, and lead out - take Bayan to yourself. When they successfully reached the Ayaguz River, where they took a fancy to themselves, the new bridegroom began to rush with the wedding, But Bayan Sulu did not like the evil, treacherous and greedy Kodar and put off the wedding day.

There were days and years. Outraged Kozy Korpesh decided, by all means, to find his bride and, finally, Ayaguz found the Karabay's village. Zhigit hired a shepherd, met and became friends with beautiful Bayan. She found her ideal in Kozy Korpesh - a man of a crystal pure soul, just, brave, defenseless. Hotly fell in love with the girl and Kozy Korpesh. "I will not stop at anything," he said to himself, "to be together."

Kozy Korpesh managed to defeat his opponent. But, having suffered defeat in an open battle, Kodar started a secret struggle. On his side was the girl's father. Bayan Sulu said to her lover:

"Enemies will kill you!
My dear, do not expect mercy here.
Rather take me away from here,
We will find shelter in our native places."

- My dear, stop shedding tears, please. You will find a couple. You do not want to get married with Kodar? So, let it be. But she then replied:
- I love Kozy Korpesh only.
Bayan buried Kozy Korpesh in the steppe, near Kyzyl-Kiya. She ordered Kodar to dig a well and to get out water from there with her own hands, which she would wash away with sadness. She suggested that he go down, holding on to the ribbon, woven into her long braid, and, as soon as Kodar came down, she cut off the braid. Ninety dzhigits, fans Bayan Sulu, pelted the well with stones. 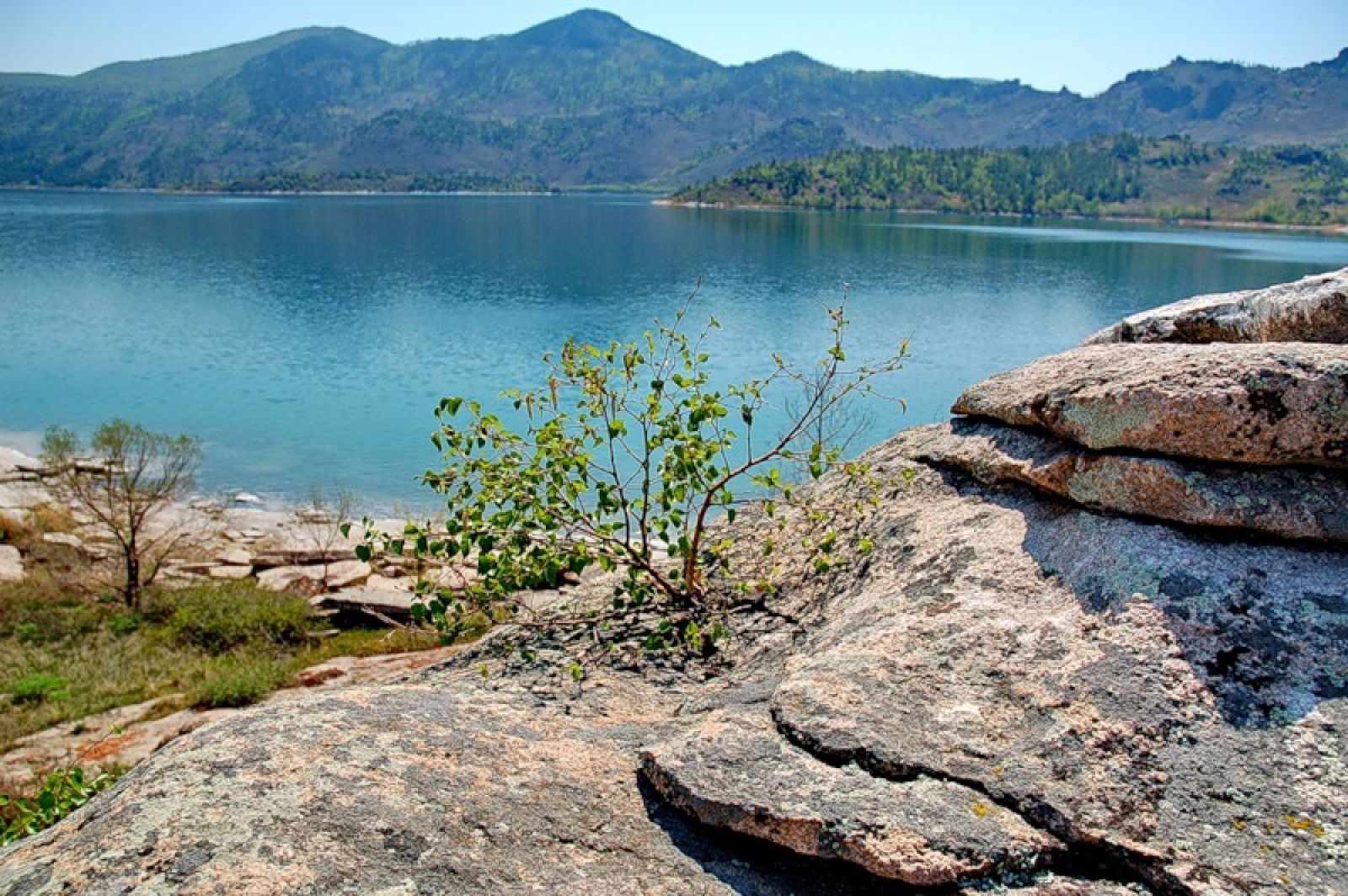 A year later, according to the traditions of her ancestors, she celebrated a funeral for the murdered bridegroom and ordered to erect a mausoleum over the grave. She ran in there and, snatching a dagger from behind her belt, pierced him in her heart.
With the rapidity of lightning, the steppe "Uzyn-qulaq" spread the news of the tragic death of the beautiful Bayan across the Kazakh steppe. In deep sadness were all those who knew her, who heard of her. They remembered her every step, every word.
Once, swimming in the lake, Bayan dropped a soap into it.
"Is not that why the water is so soft in it?" - then people said.

The friends of the deceased remembered, as in childhood, sitting on the slope of one of the mountains, they combed the scythe of Bayan Sulu, and the mountain was called Tarak. The highest and most beautiful peak in these places, in memory of Bayan, was called Akbet. Bayan sang well, loved to ride. Once, stopping at a rest by the river, she forgot the sheaths (shader) - the river was called Shiederty. The mountains for dozens of miles around the aul in still immemorial times in all wanderings were called only as Bayantau (Bayan Mountains). That's the way they are now.