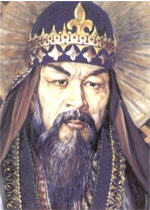 Kazakh Khan, one of the founders of the Kazakh Khanate and its ruler, presumably, in the years 1474-1480.

Currently, there are two versions of the origin of the first dynasty of the Kazakh khans. On one of them they came out of the house Horde-Edzhena, on the other - they are descendants of the thirteenth son of Jochi Khan - Tuck-Timur. For example, Abu al-Ghazi in his pedigree says:

Some of the descendants of Tukai-Timur Khan, for example Kirei Khan and Jani Beg Khan, the names of the fathers who are mentioned in detail in the list of names khakans place of the fat-Timur, came out of the circle of submission and obedience and chose to leave their homeland.