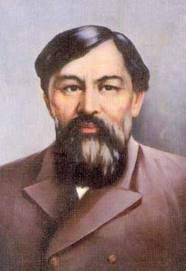 Ybyrai (Ibrahim) Altynsarin (Kazakh: ЫбырайАлтынсарин; Russian: ИбрайАлтынсарин) (1841 – 1889) was a major figure in pre-Soviet Kazakh history. He was the most prominent Kazakh educator of the late 19th century, during the period of Russian colonization of and cultural influence in Kazakhstan.

Altynsarin was born in the Araqaraghai region of Torghai oblast (now Kostanay Province), and in his early career was an inspector of Torghai schools.

He is best known for introducing a Cyrillic alphabet for the Kazakh language, and was a proponent of teaching in the Western style. However, he opposed the teaching of Orthodox Christian doctrines to non-Russian Kazakhs, but at the same time urged resistance to Tatar language and culture, in favor of Russian and Western influences. As an educator, he opened numerous Kazakh-Russian boarding schools, technical schools and schools for girls.

Altynsarin is also credited with authoring the first Kazakh grammar book, the first Kazakh-Russian newspaper, and with translation of a large number of textbooks and reference works. He was honored by the Imperial Russian government with numerous awards, including the title statski sovetnik (State Councillor).

A number of Kazakh institutions, including the Kazakh Academy of Education, Arkalyk State Pedagogical Institute and some streets, schools, and academic awards, are named after Altynsarin. There is an Altynsarin museum in Kostanay.