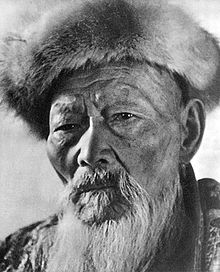 was a Kazakh traditional folksinger

According to a family legend, his mother, Uldan, gave birth to him near Mt. Jambyl, close to the headwaters of the Chu River while fleeing an attack on her village. His father, Dzhabay, then named his son after the mountain.

As a boy, Jambyl learned how to play the dombura and at age 14, left his home to become an akyn. He learned the art of improvisation from the akyn Suyunbai Aronuly. Jambyl sang exclusively in the Kazakh language .

Jambyl Jabayev died June 22, 1945, eight months before his 100th birthday. He was buried in Alma-Ata in a garden which he cultivated with his own hands.

Many patriotic, pro-revolution and pro-Stalin poems and songs were attributed to Jambyl in the 1930s and were widely circulated in the Soviet Union.

The Kazakh city of Taraz was named after Jambyl from 1938 to 1997. Jambyl Province, in which Taraz is located, still bears his name.

It has been claimed that the actual authors of published poems of Jambyl were actually Russian poets, who were officially credited as "translators."

Poet Andrey Ignatievich Aldan-Semenov claimed that he was the "creator" of Jambyl, when in 1934, he was given the task by the Party to find an akyn. Aldan-Semenov found Jambyl on the recommendation of the collective farm chairman, the only criterion of choice was that the akyn be poor and have many children and grandchildren. After Aldan-Semenov's arrest, other "translators" wrote Jambyl's poems.

In a different account, according to the Kazakh journalist Erbol Kurnmanbaev, Jambyl was an akyn of his clan, but until 1936 was relatively unknown. In that year, a young talented poet Abilda Tazhibaev "discovered" Jambyl. He was directed to do this by the First Secretary of the Communist Party of Kazakhstan, Levon Mirzoyan, who wanted to find an akyn similar to Suleiman Stalsky, the Dagestani poet. Tazhibaev then published the poem "My Country", under Jambyl's name. It was translated into Russian by the poet Pavel Kuznetsov, published in the newspaper "Pravda" and was a success. After that, a group of his "secretaries" - the young Kazakh poets worked under Jambyl's name. In 1941-1943, they were joined by the Russian poet Mark Tarlovsky.