Home News Other “THE FURTHER AWAY YOU ARE, THE QUIETER YOU ARE” - STALIN

“THE FURTHER AWAY YOU ARE, THE QUIETER YOU ARE” - STALIN 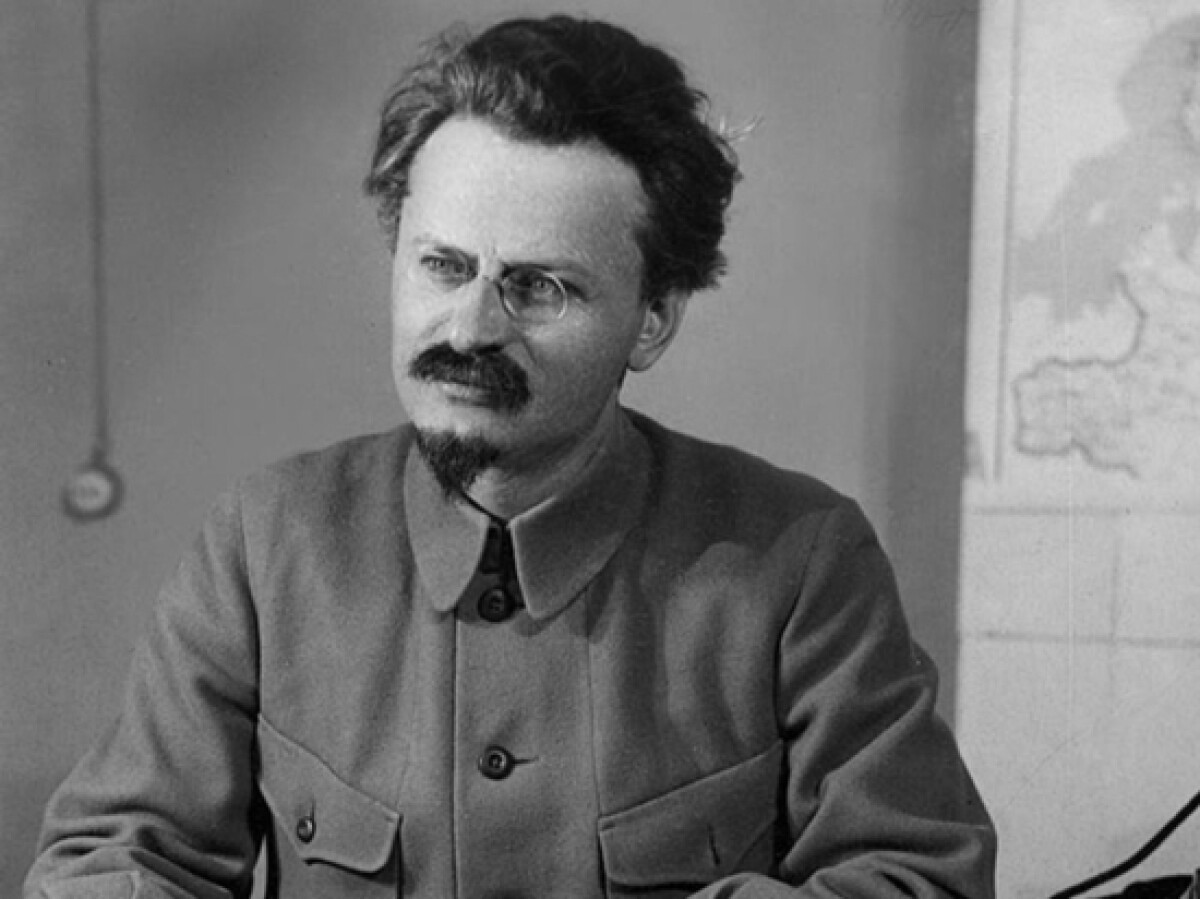 This year marks the 90 year anniversary since Lev Trotsky’s exile in Almaty.

Lev Trotsky was one of the key figures in the establishment of socialism and Lenin’s main confidant. He was considered to be one of the stronger leaders who had the potential to become Lenin’s successor. But when Lenin’s health condition worsened and it was clear that the popular leader is nearing death, a power struggle ensued. The person, who enjoyed the greater popularity and trust of the people, as a result of thoroughly prepared propaganda tactics, had his image distorted into one of a counter-revolutionary and anti-soviet agent. Trotsky was first removed from his position of power, then exiled to Almaty, and afterwards, for the first time in the history of the soviet union’s practices of punishment, he was exiled from the country all together. Trotsky became the first emigrant from Russia who was stripped of his citizenship.

Trotsky’s exile in Almaty in 1928-1929 marks an important period in the political activity of the by that time ex-people’s commissar of army and navy affairs. Stalin’s conviction “the further you are, the quieter you are” prompted him to send Trotsky into exile to a city that became a place of exile for many, although this did not achieve the intended goals. Despite ailing health, which worsened during that period due to unsuitable climate conditions and absence of a stove in the apartment that Trotsky lived in (as it is known, Trotsky suffered from gastric problems and gout), he continued his work. Trotsky was sent books to which he devoted his time from dawn to dusk.

His wife Natalya Sedova and son Leva were also with him in Almaty at that time.

An entire strategic operation was organized for the transportation of Trotsky to Almaty. People came to the train station to say good-bye and express warm wishes. Some witnesses said that there was an entire crowd of people which gathered, almost spilling over into a demonstration. However, rumours started that agents of the State Political Directorate wanted to transport Trotsky secretly in order to avoid clashing with the demonstrators. Unrest ensued leading to clashes and arrests of people. Trotsky was informed that his departure was postponed for 2 days. But this was just another strategy of deception. The very next day, on January 25th, 1928 state agents arrived with a warrant for his arrest and order to transport him in a convoy to Almaty. These measures were intended to prevent potential people’s opposition to Trotsky’s arrest as well as to destroy the image of great popular support for the revolutionary leader. In addition, the state agents attempted to portray the whole affair as if it was voluntary from Trotsky’s side, which would factually mean an admission of guilt. However, they were not able to get the same expression of remorse from Trotsky as they did from Kamenev. Trotsky understood very well these tactics and the fact that this false portrayal must be revealed, and in order to do that, he must provoke the state agents to use force. Trotsky along with his wife and son locked themselves in the room and when the door was broken in, Trotsky refused to leave voluntarily and was literally carried out. While he was being carried out, his son Leva knocked on all the doors in the building yelling “they are taking Trotsky”.

At the train station there was no-one except the people working there. Trotsky and his family were not given time to prepare their suitcases or even a small handbag.

Nevertheless, once everyone was settled, Trotsky maintained his composure. And as they got further and further from Moscow, the accompanying convoy became more responsive to their needs. In Samara they were bought clothes, soap, powder for brushing teeth, toothbrushes and other amenities. Two of Trotsky’s loyal aides, Sermuks and Poznanskiy decided to accompany him. But the state authorities did not allow this, so they got on a different wagon of the train. It was still risky for Trotsky to meet his comrades in the train, but his son Leva did meet up with them. 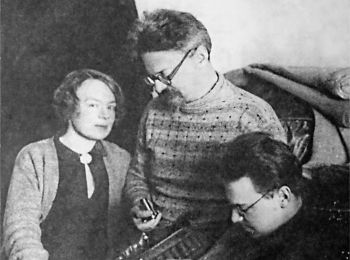 On the 10th day of their travels their baggage finally reached them. Finally Trotsky could find out more about the place that he and his family were being sent to with the help of the Semen-Tianshiansky’s book.

The train arrived in Frunze (Bishkek). After a brief rest there, they continued their journey towards Almaty.

“At three o’clock at night, the train stopped. We had arrived. Where? As it turned out, to the ‘Zhetisu’ hotel on Gogol street. The rooms were certainly decorated in the style of the times of Gogol. We were given 2 rooms. The neighbouring rooms were reserved for the State Political Directorate agents and the convoy.”

This is the description of their arrival by Natalya Sedova-Trotskaya and according to her, at the beginning of their stay neither her nor Trotsky left the room. Their son Leva went out to explore the city. In the beginning he found out where the telegraph service, postal service and pharmacy are located. This tells us that the Trotskys were not giving up hope and were defiantly set on continuing their political work by keeping regular communication if not with the official headquarters, at least with those working behind the scenes. After a couple of days, Trotsky’s former stenographer and secretary, Nikolai Sermuks, arrived. But his visit did not remain a secret for too long. In the evening of the next day he was arrested. Sermuks was locked up in the basement of the Almaty State Political Directorate and then sent off to Moscow.

However, the Trotskys did not think of giving up. Leva took on upon himself the administrative responsibilities and sought out ways to establish channels of communication. He also conducted negotiations with the local authorities and demanded permission for Lev Trotsky to go hunting, which is something he loved to do.

The Trotsky family lived on Krasina street 75, in the building of the People’s Commissariat of Foreign Affairs. Overall Trotsky was satisfied with the new flat and the living conditions. But he was most troubled by the climate which at that time turned out not to be as warm as he had expected.

Almaty’s residents knew that there was a political figure in exile living here, whose popularity was on par with Lenin. The young Dinmukhamed Kunaev remembers how he walked passed the house of the revolutionary figure but never managed to meet him. The first that he met Trostky was completely accidental, while he was coming back with friends from a trip to the Medeu meadows. Kunaev and his friends respectfully greeted Trotsky, who responded likewise and continued on his way. It was impossible to isolate the exiled revolutionary from the society at large, but often, communication was interrupted by the State Political Directorate agents. Those who managed to meet the former leader faced certain consequences. They could be fired from their job or expelled from university.

Closer to summer time the Trostkys wanted to relocate to the area of the mountain hills because the climate there was better for Lev Trotsky and there was lower risk of contracting malaria. He was allocated a special refurbished dacha house at a collective farm administered by the State Political Directorate. The dacha had 2 rooms, a kitchen and a porch. 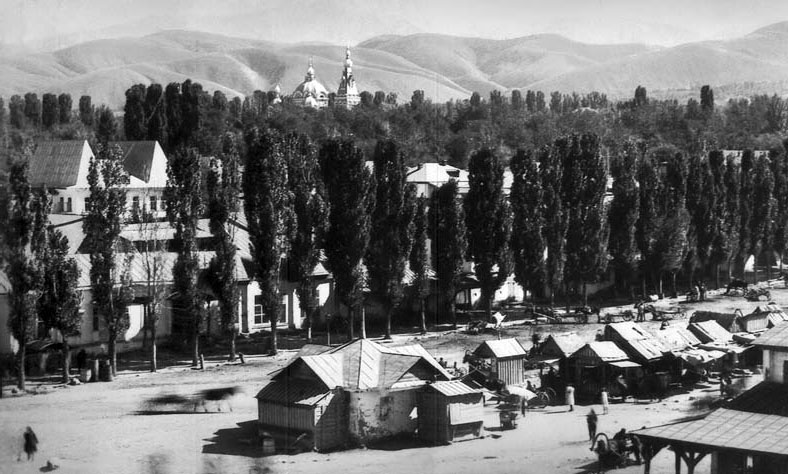 The Trotskys’ impression of Almaty was ambivalent. On the one hand the city mesmerized with the beauty of its nature: in the winter the snow was white, clean and fresh all throughout the season, in spring fields of red poppy seeds covered the lands, and summer brought with it the joy of the taste of Almaty’s renowned aport apples. On the other hand, the city did not have a public water supply system and there were problems with electricity. Trotsky complained about the climate conditions which facilitated frequent outbreaks of malaria.

However, soon the Trotsky’s found their own rhythm for their life in Almaty. During the day Trotsky was busy responding to letters, commenting on news from Moscow and wrote about his life. After work he could go hunting in the mountains.

For Trotsky this was a period of patient waiting. It is true that he could have pretended that all is fine in order to morally support his wife and son, but his distance from the main center of political activity dampened his optimism. The opposition and trotskyist ideology were gaining ground in the country. The authorities tried to prevent Trotsky from engaging in any political activity.

He writes: “The threat of changing the conditions of my exile and of my isolation from all political activity sounds as if I had not been exiled to a place 4000 kilometers away from Moscow,  250 kilometers away from the railroad and almost the same distance from the border of the western desert provinces of China, a place where malaria shares its kingdom with only the plague and mischief. It is possible that Stalin’s fraction, which holds direct authority over the State Political Directorate, will do everything in its power to isolate me not just from political activity but all kinds of activities.”

Despite all his son’s efforts Trotsky felt a sharp shortage in newspapers and publications reached him with a delay of 10 days to a month. Thanks to the efforts of the Central Committee secretariat and the State Political Directorate letters were also delayed for months. Then came the tragic news of Nina’s, his daughter’s, death. Her letter from the hospital took 73 days to be delivered and arrived only after her death. Lev Trotsky lived in Almaty for almost a year. On January 29th 1929 he was handed a notice of his expulsion from the Soviet Union for “counter-revolutionary activities”, which manifested in the “organization of an illegal anti-soviet party, the activities of which were directed at provocation of anti-soviet proclamations and preparation of an armed battled against the soviet power”. Trotsky was given one day to collect his belongings. Despite all the obstacles set before him, he continued his political activity and interest in the latest events of his country and the world. The idea of a “permanent revolution” could considered to be Trotsky’s main concepts. According to him, revolutionaries must devote all their efforts to the establishment of the dictatorship of the proletariat not just in USSR. The social-democratic principles must be spread all across the world. It is clear that this is a feat that cannot be achieved in just one lifetime, but Lev Trotsky, regardless of the country of which he was an emigrant, continued working relentlessly towards his life’s goal.