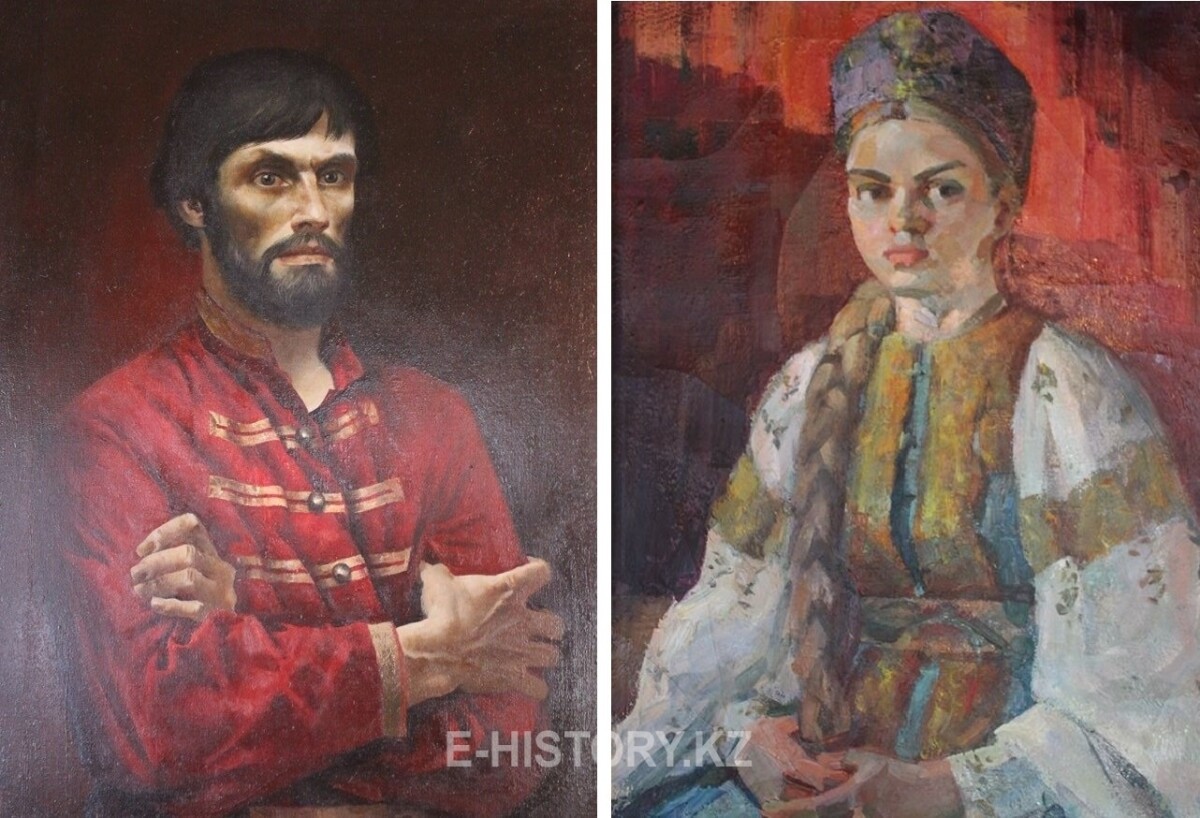 At the end of the 16th-beginning of 17th century peasants and cossacks who were fleeing from Russia’s repressive serfdom laws settled on the banks of the Yaik river (Oral).

This is how, the foundation for the fortress was set on the bank of the Yaik river in 1584. In 1613 this territory was given the status of a city. That is how the city Yaik (currently Oral) was formed.

In the meantime, the imperial crown became interested in the territory of the shores of the Yaik river. Russian landowner class started settling on the fertile lands of the river banks and building fortresses. The best lands were taken away from the local Kazakh population living there and as a result the total area of pasturable lands decreased.

In 1771 the revolt of the Yaik cossacks against the feudal repressions commenced. As a result, the cossacks were labeled as divided into two groups - “obedient” and “disobedient”.

These were somber times for the city of Yaik as punishments and forced deportation of people to labor camps became widespread. Those deemed as “disobedient”, especially among the poor, were given huge fines. These conditions of repression and poverty lead to a larger revolt - the Peasant’s war of 1773-1775, which was led by Yemelyan Pugachev. 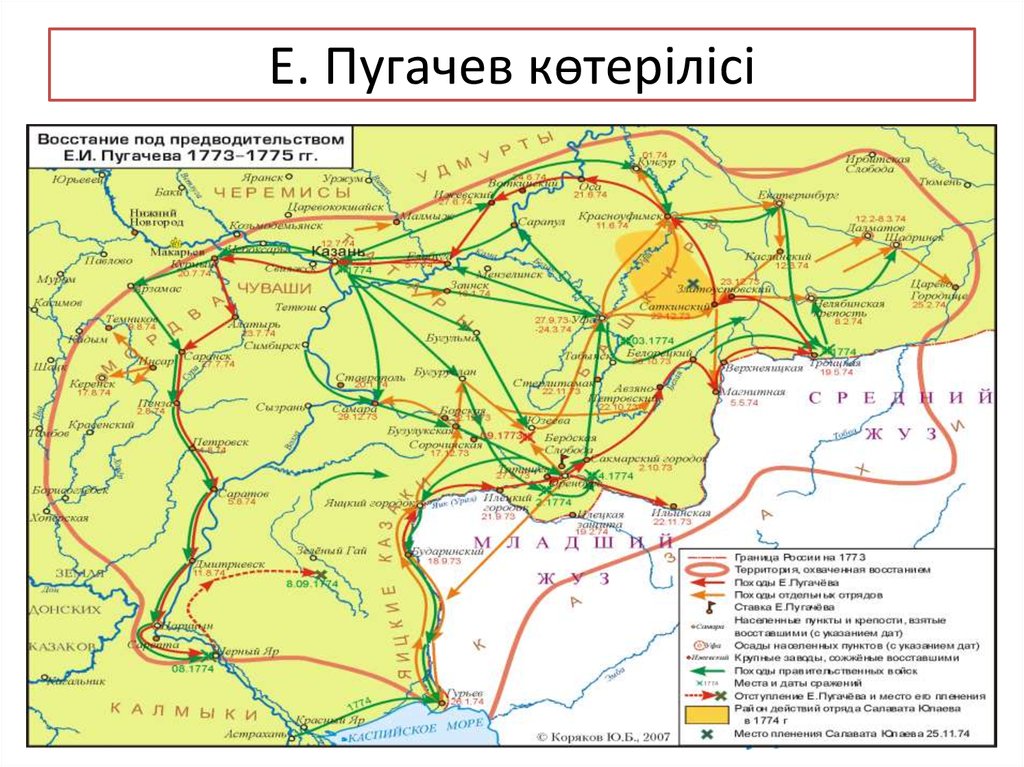 Russians, Bashkirs, Udmurts, Tatars, the Chuvashes, Mordvins and Kazakhs who lived across the banks of the Volga and Ural (Edil-Zhayik) took part in Pugachev’s revolt against the feudal-serfdom repressions in Russia. The revolt’s participants considered Pugachev to be their czar.

The Udmurts, as one of the ethnic groups that took part in this multiethnic rebellion, were led by Kozma Ivanov. The Kalmyks - by F. I. Derbetev, the Tatars and Bashkirs - by colonel Salavat Yulayev, and Kazakhs - by sultan Dosaly. And now there was one leader who unified everyone in the name of a common cause. This was the greatest dream which later proved to be a terrible disappointment for the people.

Kazakhs of the Middle Zhuz, who were dissatisfied with the colonial policies of the imperial crown joined Pugachev’s peasant revolt. Pugachev’s manifesto spread like fire among Kazakhs of the Middle Zhuz and attracted them to the rebellion. Kazakhs were very discontent with the fact that the fertile lands of the right banks of the Yaik and Irtysh rivers were given out to Russians and Cossacks. Furthermore, the prohibition imposed on Kazakhs to approach territories occupied by fortresses caused anger and outrage of the people. Pugachev promised to the repressed masses to “provide everyone with land”. 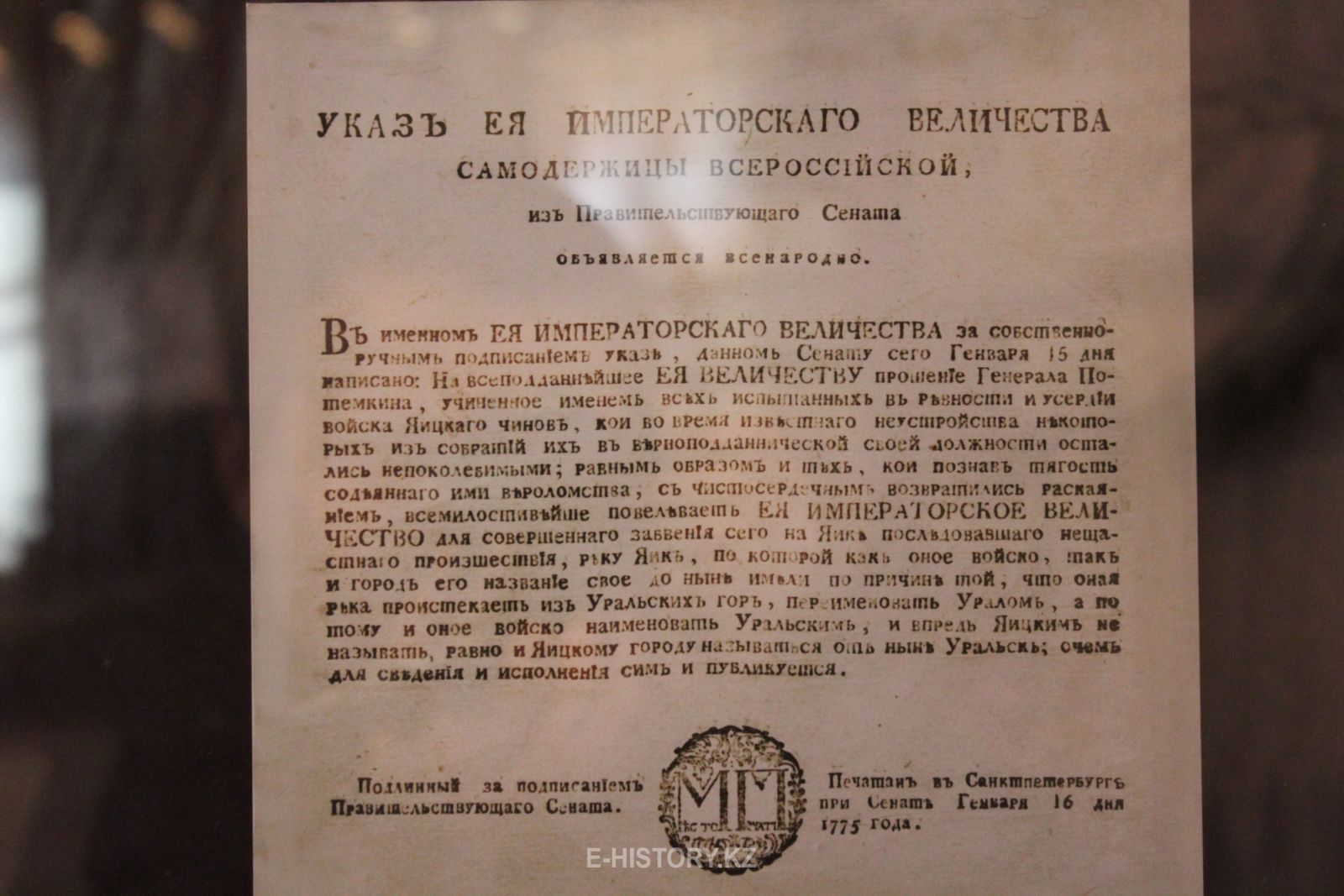 The participation of Kazakh people in Pugachev’s revolt was not incidental. On September 20th, 1773 Yemelyan Pugachev addressed the Kazakh people with the request to supply him with 200 warriors. In october of the same year sultan Dosaly sent a batallion to Pugachev, which was comprised of warriors from the Tama and Tabyn clans, under the leadership of his son Seidaly. After some time, sultan’s second son joined this batallion and afterwards, the sultan himself. This is how the Russian writer V.G. Korolenok, who worked at the archives of the city of Ural in 1900, described the events:

“Sultan Dosaly’s third son is one of those who directly participated in Pugachev’s revolt and facilitated the seizure of the Yaik fortress.” The writer also noted the great contribution of Kazakh warriors to the raids against the fortresses and outposts on the border of Orenburg. Academic V. P. Pyatkin wrote:

According to the Bashkir colonel B. Kanakev, who took part in Pugachev’s revolt in 1774, 10 thousand Kazakh warriors took part in the rebellion. And even after Pugachev’s execution in 1774, the Kazakh army of the Middle zhuz continued attacks against czar’s rule. In 1775, their perseverance spilled out into the formation of a national liberation movement, under the leadership of Syrym Datov. With their participation in Pugachev’s revolt, the Kazakh people of the Middle zhuz fought for their own national liberation. 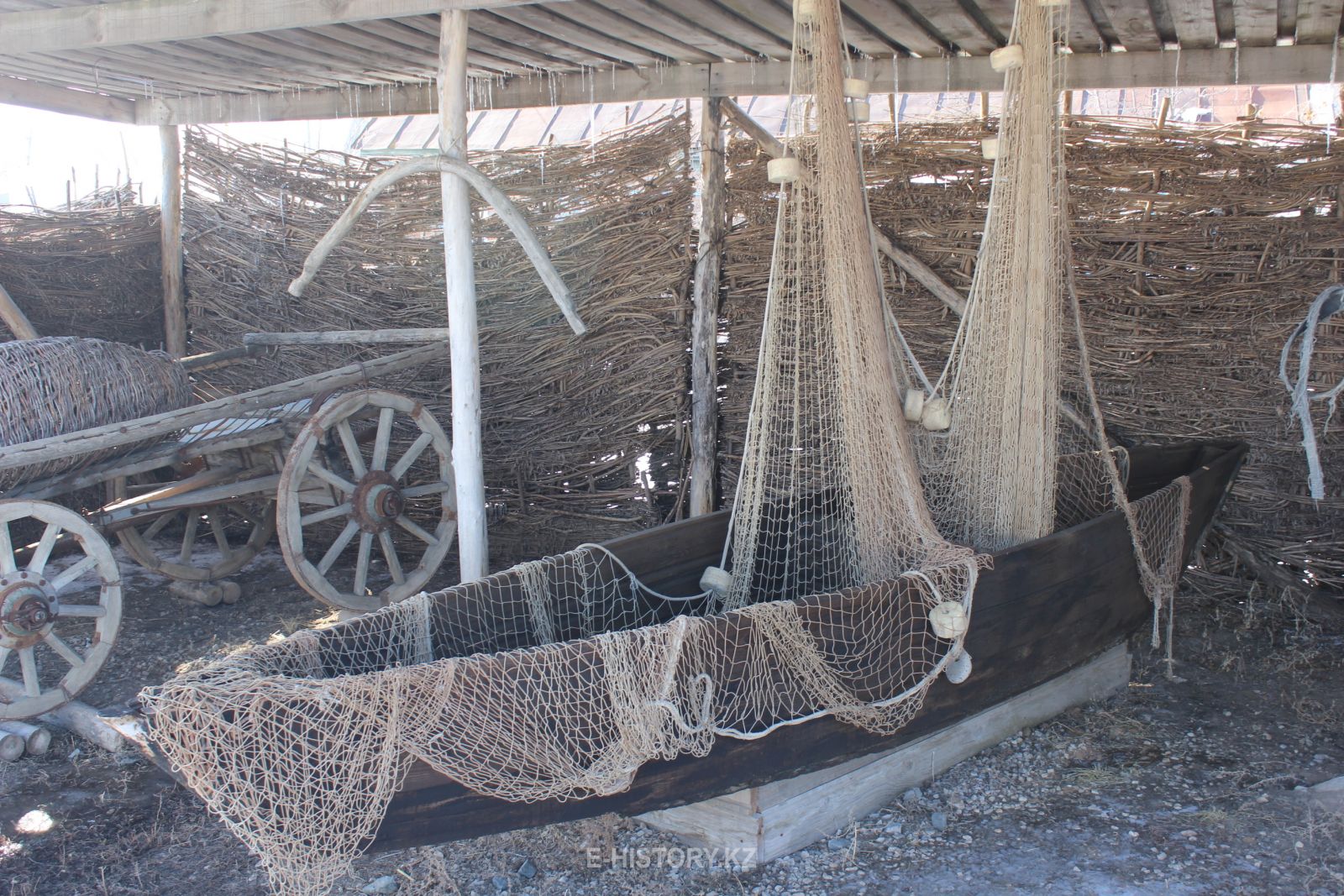 In 1773-1775 the city of Yaik was the power base of the people’s movement which was led by Pugachev. After the quelling of the revolt, by the order of Catherine II the city was renamed to Uralsk. Trade played an important role in the city’s economic life. In 1846 Uralsk became one of the largest cities and a big trade center. Before the beginning of the 20th century Uralsk was part of the Orenburg governorate, center of the Uralsk cossackdom, as well as the administrative center of the Uralsk region. 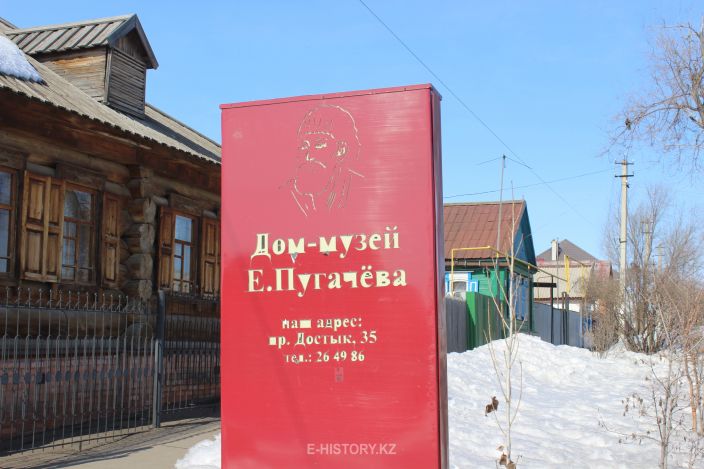 The memorial house-museum of Pugachev’s is the silent witness to all the historical events that occured in the city of Yaik (currently Ural). The house of Peter Kuznetsov, one of the active participants of the 1773-1775 peasant revolt under the leadership of Pugachev. This is the where the wedding of Pugachev, who by that time proclaimed himself as Peter III, and the daughter of Peter Kuznetsov, Ustinya, was held. Thereby, this house became the “headquarters of the cossack empress”. After the quelling of the Pugachev revolt, empress Catherine II had Ustinya locked up in the Kexholm fortress for the rest of her days. Pugachev was in this house in 1774, during the siege of the Yaik fortress. 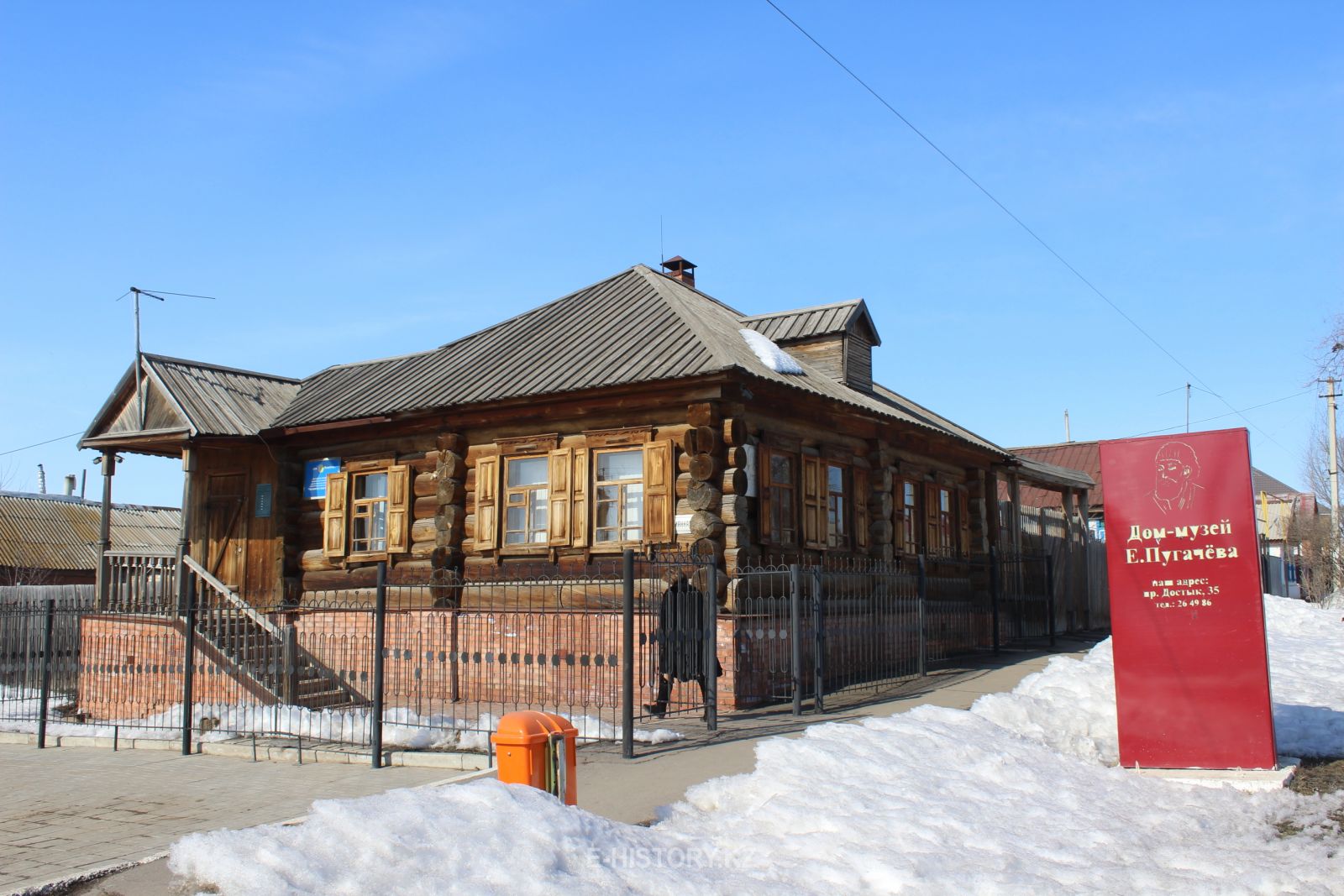 The house itself was built in 1751 after the “Shilihin guild” by Kuznetsov who was a cossack with moderate means. The structure of the house is made up of stacked round logs and a rooftop. It has 2 rooms, a dining room and a cellar space. Great Russian travellers, researchers, writers and poets had visited this house at different points in time: P. I. Rychkov, P. S. Pallas, A. S. Pushkin, I. A. Krylov, V. A. Zhukovskiy, L. N. Tolstoy, T. G. Shevchenko, M. I. Mikhailov, V. I. Dal, V. G. Korolenko.

On 20th of September 1833, whilst travelling from Orenburg to Uralsk, Alexander Pushkin stopped at the house of the appointed ataman V. O. Pokatilov. Afterwards, when recollecting the events of his travels along Pugachev’s trail, he wrote:

“I visited places where some of the most important events of the era that I described happened, verifying the dead records through the recollections of witnesses who are still alive but old, and once again checking their dwindling memory by subjecting it to historical critique.”

As a result, Pushkin wrote two works - the historical “The History of Pugachev” and fictional “The Captain’s daughter”.

The Pugachev memorial-house, as an architectural monument of 18th century is located in the city of Oral, on Dostyk avenue 35. 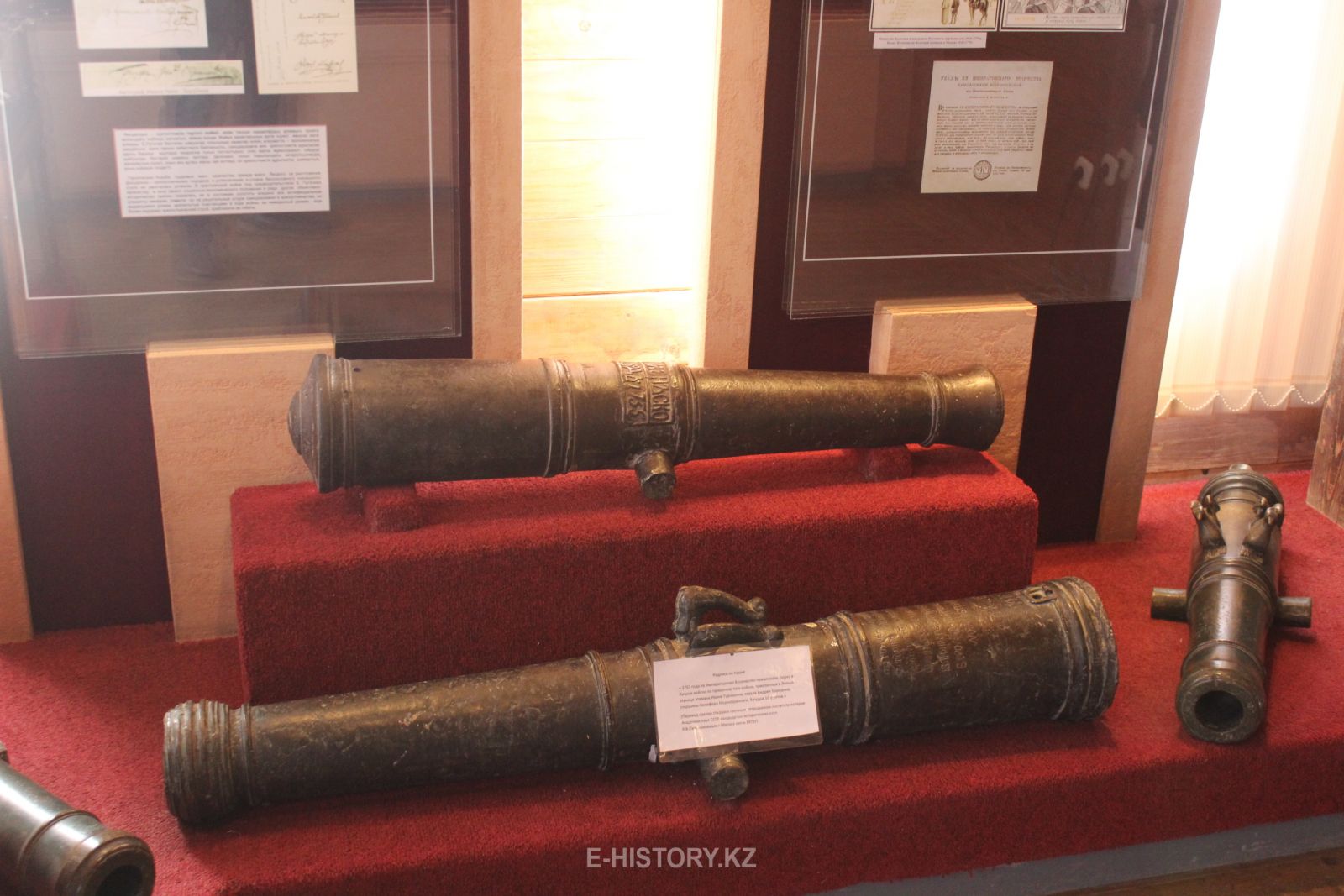 In 1967 there was a library here and in 1991 the building was transferred to the regional local history museum. 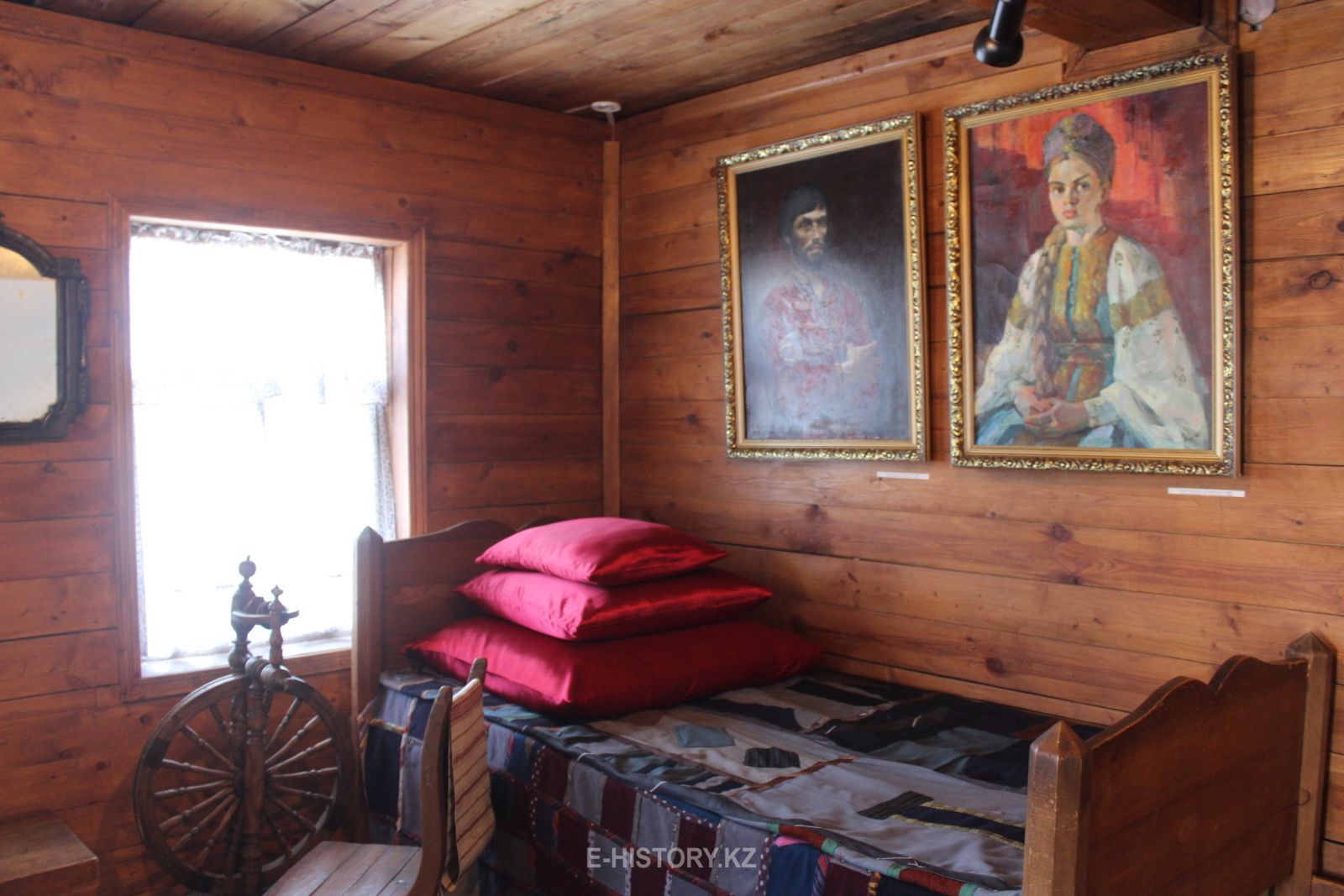 It now houses objects that represent the russian-cossack livelihood, original arms, banners, cannonry, gifts from the czar of the Russian empire. Hundreds of reliques from Pugachev’s museum house, which bears witness to the historical events of the city of Uralsk, are some of the brightests symbols of the history of this land and the livelihood of the Yaik cossacks.