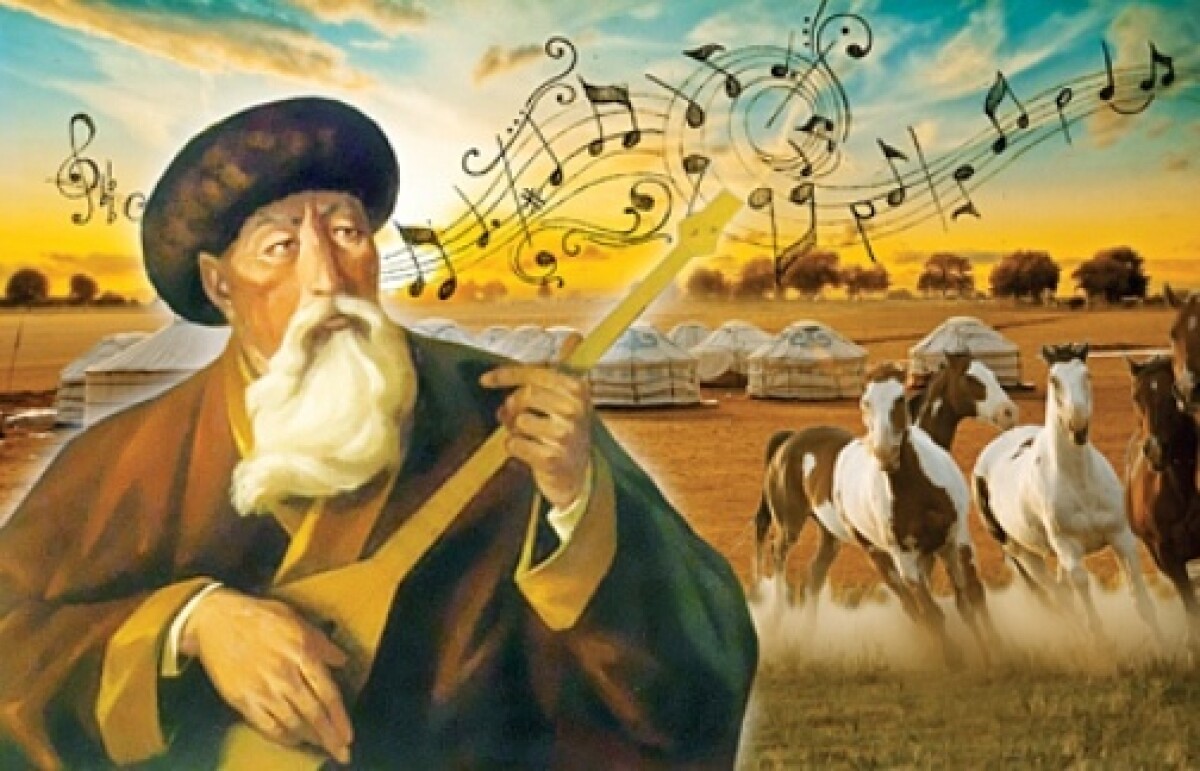 Since ancient times musical instruments were used for informing people in fight treks, while hunting, at the performing of songs and kuys, chants of baksy (healers).

In traditional Kazakh musical and material culture a significant place are taken by musical instruments. They are cultural heritage which is transferred from generation to generation and which came till our days.

In the present time over 50 types are known. In funds and expeditions of various museums of our country more than four hundred Kazakh ancient musical instruments are stored.

Each instrument has inherent for it sounds (melody and melodiousness). The names of many can be met in folk poems and legends, also on works of Russian and foreign travelers of 15-19 cc.

In XIX century in the everyday life of Kazakh people the most popular instrument becomes two-stringed dombra. Dombra was a favorite instrument of folk instruments. Tender, melodious and smooth (konyr undi, kumbirlegen dybysty), sonority of dombra since a long time is known for many. Different versions about the origin of dombra exist.

For instance, the reminder on tambur (instrument played by plucking as dombra) is kept in the works of Aby Nasyr al-Farabi. A Russian folk instrument dombra is marked in written sources of XIV century. Its initial type and form remind a Kazakh dombra. The similarity of the names of instruments also proves the unity of their origin. There are adherents of the origin of dombra connected with the activity of baksy — shamans. In ancient times people inspired dombra, marked it with wordy symbols, endowed with many qualities of a man. On that some compounds and details of the dombra itself and their names: moiyn — neck (fingerboard of an instrument), keude (breast), kulak (ears), bas buyn (head phase), orta buyn (middle part of sound phase), etc. About the antiquity of the instrument say kuys — kegends, playing the role of the accompaniment of rite-traditional acts.

One of the peculiarities of dombra performance is the solo form of the playing the instrument. It induced the promotion of outstanding personalities in various historical epochs. In the past century along with a talented folk composer Kurmangazy appears the whole group of such great dombra-players, composers of beautiful kuys as Dauletkerey, Tattimbet, Bayserke, Kazangap.

Owing to them the musical form of dombra kuys is continuously realized. Along with the development of technical possibilities of dombra the performance is quite enriched. The art of every kuyshi and his style differed with a bright individuality, distinctive manner of performance, certain group of means of musical expression and variety of the theme of dombra kuys.

In the nomad way of life of Kazakhs the wind folk instrument — sybyzgy (a type of open profile flute) existed. It was made out of cane, wood, more seldom — metal. On the specificity of the sounds and its peculiarities among people there is such an expression: «Tildin ushimen, tistin kushimen» (with the tip of a tongue, with the help of the teeth strength — support). Sybyzgy sounded not only at the summer pasture, but also in everyday life, for instance, at the wedding, at the baby birth, at the arrival of the honorable guest, etc. Since the second half of XIX century the sybyzgy performance tradition gradually started disappearing because of the destroyalof traditional norms of the stock-raising agriculture.

One of the most spread musical instruments was kylkobyz. This bowed two-stringed instrument was invented in VIII-IX cc. Kylkobyz was popular among shamans. The use of kylkobyz at the weddings and other feasts by shamans was strictly prohibited. They did not want that instrument to become the great dignity of people. Shamans were interested in the creation of the mystique around it. With that aim on the kolkobyz were hung the feathers of the eagle-owl and metal plates, inside the body the mirrors were stuck. When the instruments were shaken, extra sounds were heard, and those sounds were skillfully used for their own purposes by shamans. For kobyz kuys the sound-expressiveness is peculiar: the imitation of a wolf earn, swan call, horse race, sound of the released arrow, etc. Because of the social-economic changes in the nomad society of Kazakhs the fortune of kobyz and kobyz tradition started fading. The stable bearers of kobyz tradition were only baksy.

The following, more spread musical instrument was shankauyz (jew’s harp) — an ancient idiophonic lingual musical instrument which was made out of metal, wood, bone. Skilled performers can play several notes at one strike on the stem. Mastery of certain musicians reached the fact that they put the whole instrument into the mouth and played, making the thin core vibrate with help of the tongue. The tiny instrument can be easily hidden and worn on them. It was rather popular among women. In the present time shankauyz became the rarity.

The name of the given instrument comes from the construction and form, also the location of it during the performance, that is near the mouth of a person. Shankauyz got its name from two words «shankita» (curved) and «auyz» (mouth). To the ancient type of instruments played by plucking is related zhetigen. The name zhetigen consists of two words: «zheti» (seven) and «agan», which can be deciphered as seven singing strings or seven songs. During many centuries the instrument lasted seven-stringed, with shifted stands.

Eliciting from the instrument sounds, full of grief, the performer shows in different on character images of their children.

These impromptu melodies got the further development and came to us in the form of instrumental plays-kuys under the general name zhetigennin zheteui (seven kuys of zhetygen). Zhetygen continuously develops, enriching the family with new types: primo, alto, tenor, basso. The instrument on the character of sounds is melodious, creates possibilities for original performance ways of playing.

Among people was used the other musical instrument played by plucking, the predecessor of dombra — sherter. It differed from dombra with less sizes, stronger sound and absence of the fret on a fingerboard. Mainly, sherter was similar with kylkobyz. Sherter, as other Kazakh ancient instruments is used most of all for the accompaniment of songs, fables, legends and was wide-spread among shepherds.

In the musical culture of Kazakhs were widely used wind instruments. Among many people wind instruments have the names: sur, surma, zurna, surnay, nay, nay, sarnay. The word «Syrnay» consists of two words — «syr» and «nay». In the Kazakh language «syr» is used in the context of «mystery», «secret». «Nay» the name of the instruments and certain tube-like subjects.

Old wind instruments were used for various purposes: syrnay, made out of cane tubes, was popular among young people, and syrnay with a strong sound made out of horns or bones — in military treks.

Unique wind instruments made out of caky are uskirik, saz syrnay and tastauk. They had various size and form (birds, animals, fish, horsemen, many headed horses) and were related to the type of ocarina («ocarina’» from Italian means «little goose»).

In ancient times children (more seldom — adults) performed folk songs using such instruments. All of them presented the variety of flute with the whistle device. At the present time the ocarina-like instruments were kept only as child musical instruments.

In some folk fables, also in the messages of eyewitnesses are marked the ancient wind instrument kerney. In the past kerney as well as syrnay was used for the signaling in treks. In the nomad environment wide-spread musical instruments were percussion instruments.

One of them — dabyl. That instrument, serving for signaling. Usually, warriors used it while attacking or when coming close to native places. Dabyl differed from other percussion instruments with its rim which two sides were pulled with leather. Many travelers often call dabyl as a drum, because in its for and primitive design these instruments were similar to each other.