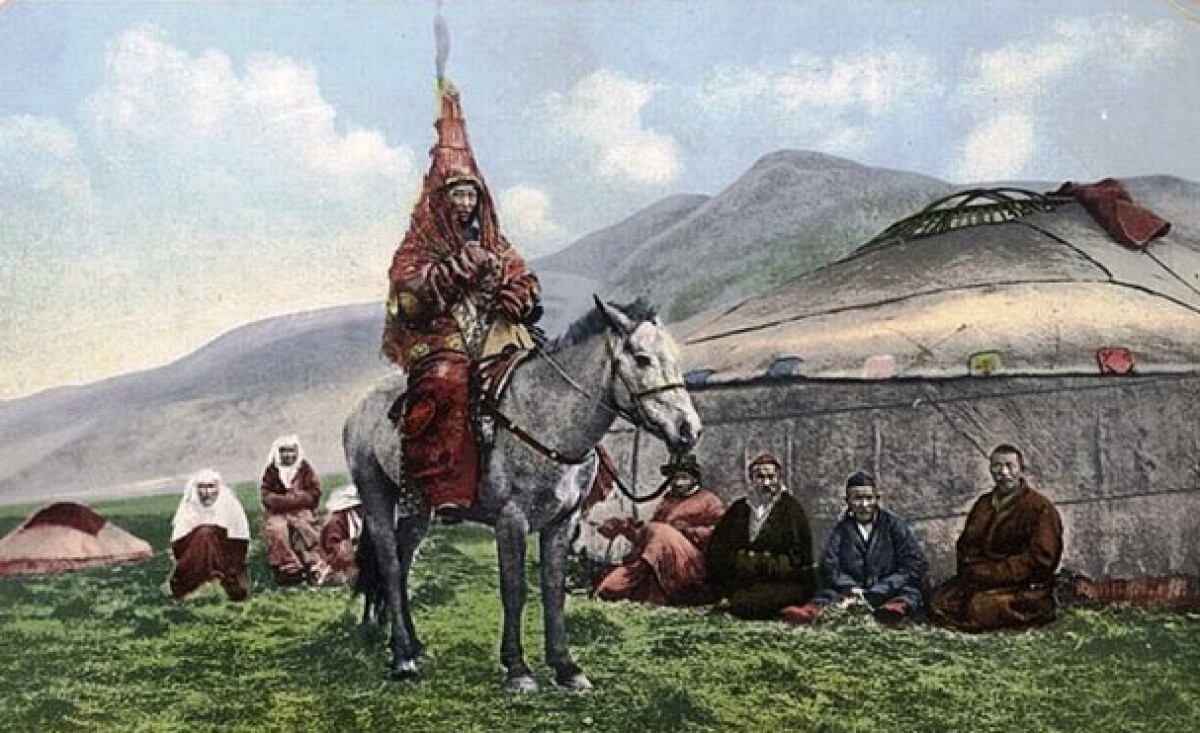 During centuries the Kazakh national clothes was simple and rational. Leather, fur, thin felt, cloth were traditional materials, which Kazakhs made themselves.

During centuries the Kazakh national clothes was simple and rational. Leather, fur, thin felt, cloth were traditional materials, which Kazakhs made themselves. A costume is sewn from the imported materials — silk, brocade, velvet.

The head-dresses of the Kazakh women, as of the other women of many nations, characterized their family status. The girls wore head-dresses of two types — takiya and a ward cap with fur trimming — borik, trimmed with fur of otter, fox, beaver along the edges. Boric was a belonging of girls from well-to-do families. Takiya, as a rule, was decorated with a bundle of eagle-owl feathers as an amulet. 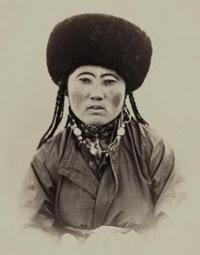 The Kazakh national women’s wedding head-dress — saukele, representing high (about 70 sm) conoid form cap, is of particular interest. The very expensive among them were priced at a hundred horses then. Saukele was a compulsory part of dowry and worn by bride during the wedding ceremony. 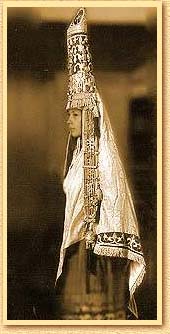 From birth of the first child, a woman put on a head-dress of a married woman, which she did not put off till became old. This head-dress consisted of two-parts: the lower part — kimeshek, put on a head and the upper part — as a turban, wind up over the lower part of a head-dress. Both parts are made of white cloth. Men’s head-dresses were diverse. The summer — kalpak is sewn from thin, mainly, white felt and had an unusual old style. Men’s winter caps — tymak were of round form with fur trimming. 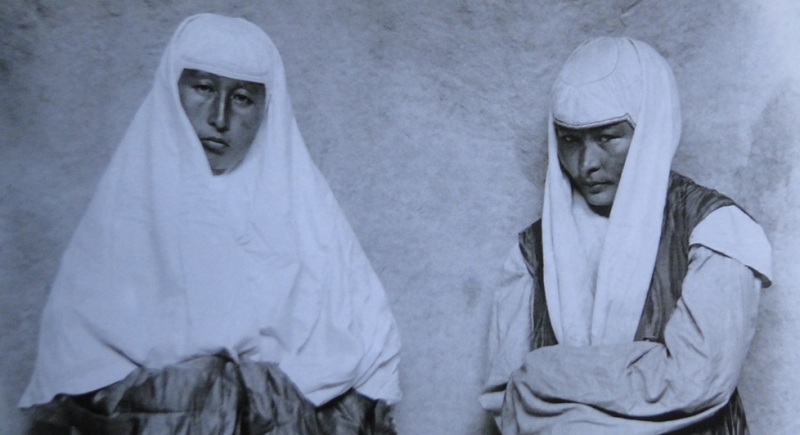 Trousers. In the past, when Kazakh women rode a horse, trousers were compulsory part. They were sewn from sheepskin, homespun cloth, dense cotton cloth. The trousers were a little shorter than the knees, voluminous at a waist, narrower to the lower part.

Shapan. The ancient outer clothing of a woman is a straight banian long-sleeved caftan. Ancient tunik-formed caftans had an open neck, the later ones were with turn-down collar.

Wedding caftan was a compulsory part of a dowry of a fiancée. It was made of expensive cloth - Central Asian silk, often of red color. This caftan had usually tunik-design with an open neck, without collar and with long sleeves.

Kupe is warm winter fox-fur clothing. For the upper of clothing a bright expensive cloth was used. Sometimes it was striped with velvet or braid.

A wide variety of decorations — wonderful applications, galoon, stripes on clothing, head-dresses, foot-wear were used. Cornelian, coral, pearl, nacre, stained glass were used for women’s adornments made of gold, silver, copper, bronze. A belt was especially used — a compulsory element both for man’s and woman’s clothing: it was ornamented with embroidery and a silver plate was sewn on it.

Kazakh men used to wear different skullcaps (takiya), summer and winter hats. Summer hat — kalpak was sewed from thin felt, mostly white, and had a specific ancient cut. Borik and tymak were worn in winter. Tymak is a warm winter hat with earflaps and neck flaps made from fox, which is popular among Kazakh men even nowadays. Bashlyk is another national headwear, made of camel cloth, which was supposed to be worn on top of other hats, to protect from dust, sun, rain and snow.

Men’s clothing consisted of the following components: Double under vest (zheyde), lower pants — made of light fabric and the upper — of cloth, suede, sheepskin or thick cotton fabric. From the early ages, when the Kazakhs used to go horseback riding, trousers were a necessary and important part of their clothing. The main type of outer clothing was shapan, a kind of robe.

In old times men’s and women’s footwear were also similar, though girls’ boots were often decorated with embroidery and appliqué work. Footwear differed according to seasons. For example, winter boots were tall, broad-shafted, worn over the felt stockings. Also there were differences between footwear of older and younger people. Young people often wore boots with high heels (up to 6 — 8 cm), older people — with low heels. Another common type of footwear among Kazakhs was light boots without heels, tight fitting on legs, called ichigi or masi. Leather kebis was worn over them, which was supposed to be put off at the entrance to the house.

At present national forms of clothing had been longer conserved in the village and by the people of the eldest generation. The modern clothing, created on national motives is always original and unique.