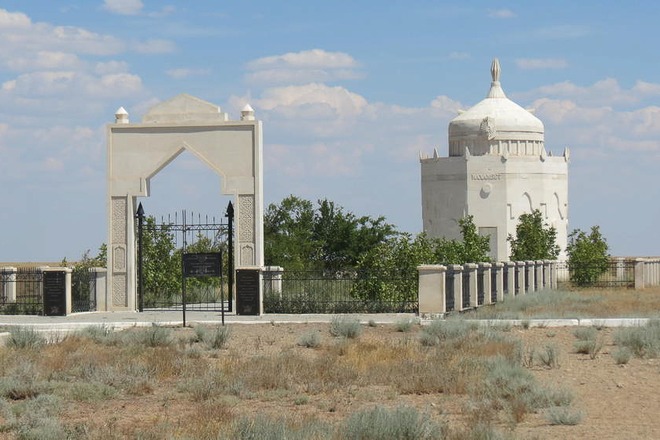 One of the first places in a number of Kazakh poetry belongs to the distinguished poet-warrior, one of the leaders of the uprising in 1836-1838 in Bukeyev Khanate Makhambet Utemisov.

One of the first places in a number of Kazakh poetry belongs to the distinguished poet-warrior, one of the leaders of the uprising in 1836-1838 in Bukeyev Khanate Makhambet Utemisov. Makhambet embodied in his work all the best qualities of the Kazakh poetry has left works, which reflected the thoughts and feelings, aspirations and dreams of the masses.

The majestic building represents a many-sided tower, topped with a massive dome and decorated with planted bas reliefs. The construction is made of concrete, and snow-white shelly soil was applied in exterior and interior trim. The diameter of the exterior circle is 7,6 m.; the interior circle is 6,2 m. The height of the building is 6,4 m., the dome’s height is 1,8 m., the outside diameter of the dome is 5,2 m., the total height is 12,2 m. The height of the entry stair is 1 m, the density is 0,5 m. A classical arch decorated with carved ornaments is stated before the entrance of the mausoleum. Generally, the whole composition looks as if it comes from those distant times when the surrounding steppe could hear the live voice of the great poet.

For the first time, the burial place of the great poet and warrior Makhambet Utemisov was surveyed by Guryev poet Berkhair Amanshin in 50s of XX century. In 1980, this place was surveyed by the Ural expedition of the Minister of Culture of the Kazakh SSR. Excavation of the tomb began on the 9th of July, 1966.

A sculptor, anthropologist Noel Zhumabayuly described the excavations in his book «Out of darkness of centuries», published in 1969: «The sun was burning mercilessly making air hot up to 53 degrees. We began to dig carefully. In the upper layers of the ground we found skull of the camel and then, pieces of the wood — the remains of a wooden door of the yurt. There were bones of the pelvis just under it. The skull was not there. It was the most critical moment of the excavation. It seemed that doubts of sceptics, who believed that Makhambet’s skull was lost, were confirmed. The participants of the excavation decided to expand the grave. We worked silently, changing each other. Suddenly, the tool hit something solid. A the level of the bones of the right hand, there was a skull with traces of slashed damage on it».

By decision of UNESCO, 2003 year was declared the Year of the poet Makhambet Utemisov.

Materials on theme
Kimal Akishev. The findings of lucky archaeologist
The Monument to Hero of the Soviet Union, Zakaria Belibaev, was installed in the Eastern Kazakhstan
Veterans of the Department of Internal Affairs congratulate the young officers on their professional holiday
“Book of Chronicles”