Home News The monuments of architecture

The monuments of architecture 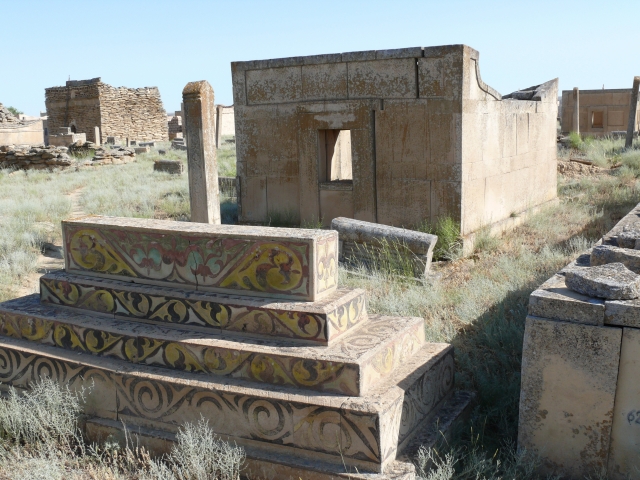 There are over 12 thousand monuments of history and culture in the area.

There are unique archeological and historical monuments preserved from the time of prosperity of the country, including rock carvings-poems, amazing buildings and mosques in Mangystau Region, where pilgrims come from Kazakhstan, Turkmenistan, Uzbekistan, Russia, Caucasus, Iran and Turkey.

Original creations of the folk architects of XIX century, when architectural art of Mangistau reached its full flowering, has absorbed centuries-long experience developed by many generations of masters. In 1980, Mangystau State Historical and Cultural Reserve was established. There are over 12 thousand monuments of history and culture in the area. 130 objects are under the supervision of the reserve, which are taken under protection of the state. Over 12,000 monuments were scientifically researched and processed. They reflect all period of development of culture and religion of the Caspian Nations. Archaeological research of the unique settlement “Kyzyl kala” is conducted. It allows obtaining important information of understudied medieval history of Mangystau, about trade relations and development of direction of the Great Silk Road. Restoration works of 73 cemeteries, including the necropolis of Sisem-Ata is continued for its inclusion in a list of protected by UNESCO. 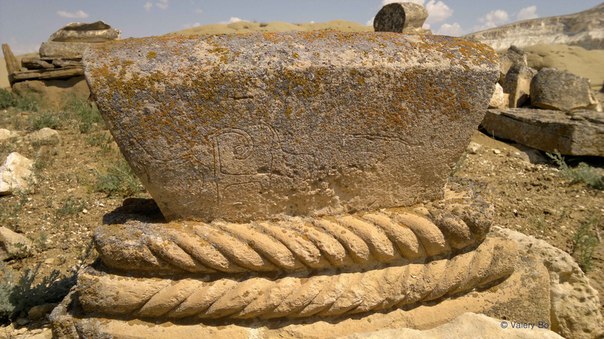 Tombstones
Small forms
Koshkartas – tomb monument in the form of semiabstract image of the ram with clear cut head and curled horns. The survey of the territory of Ustyurt and Mangyshlak in 70s revealed a number of similar tombs, such as necropolis of Akshukur, Masat-Ata. Many researchers, referring to the information of the local population date them to the early X century. It is possible, that installation of ram sculpture on the burial is associated with the ancient views or interpretation of the ram as a sacrificial animal.
The next type of tomb monuments is koytas. There are similar monuments of different sizes at many cemeteries. Early koytas has appearance of the sculptural image of the ram and covered with the images of everyday items of axes, swords, etc. Koytas of the late period represents a whole block, resting on the ground or pyramidal height, the completion of which has a round shape and covered with ornamental traditional cuttings.
According to many researchers and ethnographers, the sculptural image of the ram lost its realistic features under the influence of Islam.
Kulpytas. This type of small forms is widespread throughout the territory of Kazakhstan. Comparative study of kulpytas of different periods shows that the earliest of them usually have a spherical shape of the shank end resembling a human head. Based on this fact and information of literary sources, it is believed that prototypes of the kulpytas were ancient Turkic stone sculptures of human figures that gradually lost its anthropomorphic features under the influence of Islam attitudes. The majority of kulpytas is vertical, square or rectangular, stone pillars, stele, defeated on the height into three parts: a pedestal in the form of a massive plate, barrel, typically decorated with relief ornamental carvings and top part processed ornamentally. The proportional construction of the parts can be different depending on the client’s request or builder’s taste. Sandyktas built of large stone slabs in the form of a rectangular box are also common on Mangyshlak. Sandyktas probably were put separately and later combined with kulpytas and koytas.
There are some of tribal tamgas on them. There are many examples of successful combination of sandyktas with other types of small forms in some cemeteries. In one case, sandyktas from large stone slab combined with richly decorated koytas and in another with kulpytas and koytas. By the number of raised structures on each other, there are types which distinguished by the appearance, resembling a pyramid – ushtasy (three flagstones) and bestasy. Early ushtasy and bestasy have no decorative design, with a few exceptions there are some relief images of a curved saber and later ones covered with ornamental carvings and painted. 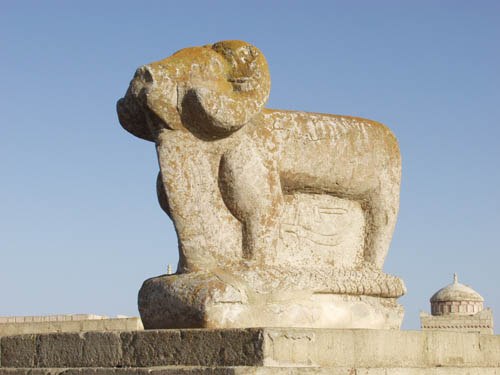 Large charnel houses
Numerous and peculiar forms of charnel houses of the region is so-called saganatam, which literally means sarcophagi, mausoleums. Established type of saganatam is a rectangular parallelepiped without overlapping, front and rear walls of which are made higher than lateral, in order to lay emphasis their architectural significance. In comparison with domed mausoleums, construction of saganatams is less time consuming and easier technically, so probably it explains prevalence of this type of memorial construction. Most of studied saganatams were built in late 19th and early 20th centuries. However, they are known from the period of Middle Ages and possibly in the form of so-called tortkulakty-tam, which were also built without ceilings but with small towers tortkulak on the four angles of the wall. With similarity of bulk composition, saganatam differs in the nature of architectural treatment of elevation and setting, it can be divided into three main groups; 1) saganatam, which is characterized by vertical relief and horizontal division of the planes of exterior and interior walls; 2) funeral constructions, notable for top of parapet of the main façade with block of cylindrical shape; 3) the largest group of saganatam, with smooth walls of facades, high parapets and sometimes with decorative doorways.
Numerous groups of funeral constructions, widespread in the territory of Mangystau. The predominant part in Mangyshlak and Ustyurt are small single-chamber structures. The chronological scope which are covered by study of monuments are limited from XI to early XX centuries and can be divided into the following periods: 1) XI-XIII centuries, when the Oghuz-Kipchak tribes built mainly mud headstones according to written sources; 2) XIV-XVII centuries, in this period burnt brick and local shell stone are widely brought into construction, the influence of Khoresm architecture is observable; 3) XVII-XVIII centuries, stone mausoleums are built, helmet-shaped dome appear in architecture firstly without flagstone facing and then with it. This form, apparently, first appeared in the form of a stone sculpture marking the hero’s grave, who died in the war and later could be moved to the domed mausoleums of the military nobility or famous warriors. Helmet-shaped dome on the monuments of Mangyshlak and Ustyurt appears as a symbol of military bravery and becomes a traditional element of the bulk composition. 4) period is marked by mass construction of all types of memorial constructions, due to the standardization of life in the steppe and strengthening of cultural and economic ties with neighboring regions.
All types of construction works, from quarrying and roughing work of the required number of products on the place to the construction and restoration of the building was mainly carried out by professional builders under the guidance of experienced craftsmen. One of the builders who constructed such structures was Karazhusup, who lived in the second half of XIX-early 20 centuries. He built many funeral constructions notable for their special feature, peculiar to these structures. His sons also became famous masters – The Karazhussupov siblings, Ongalbay, Munalbay, Itbay, Duissen, Imanbay. One of the people’s architects – Direluly Zhylkybai is also famous. He was the author of many architectural structures in Khiva, Urgench, Bukhara and especially in Khoresm and was the bearer of architectural culture of Kazakh people. From these people who built most of the monuments of quarter-century of XIX-XX centuries, in the 50s, Nazar Umirov, Almen Berdiyev and Manshar Inshev were alive. Some of the architectural terms, introduced into scientific circulation in the work by M.Mendikulov “Monuments of architecture of Mangyshlak and Western Ustyurt” published in 1956 were clarified with the help of those builders.
Mangistau Regional Comprehensive Library
http://moub.kz/
Use of materials for publication, commercial use, or distribution requires written or oral permission from the Board of Editors or the author. Hyperlink to Qazaqstan tarihy portal is necessary. All rights reserved by the Law RK “On author’s rights and related rights”. To request authorization email to mail@e-history.kz or call to 8 (7172) 57 60 13 (in - 1163)
Қазақша Русский English
MOST READ
Week Month Year
History of Wusun State and Yuezhi tribe Images of Women in the Works of Qazaq Poets-Zhyrau Nurgissa Tlendiyev. Principal Conductor of Kazakhstan President of Kazakhstan took part in the opening ceremony of celebrations dedicated to the 175th anniversary of Abai Kunanbayuly THE GREAT SON OF THE GREAT STEPPE What was the composition of the country’s Supreme Soviet of the XII Congress Year of Mouse in the history of Kazakhstan Abdurakhman Aitiyev and his struggle Ydyrys Mustambayev. Defender of Abai and Magzhan Where did Tengriism come from? Online documentaries Armenians and their kinship with the Kazakh people