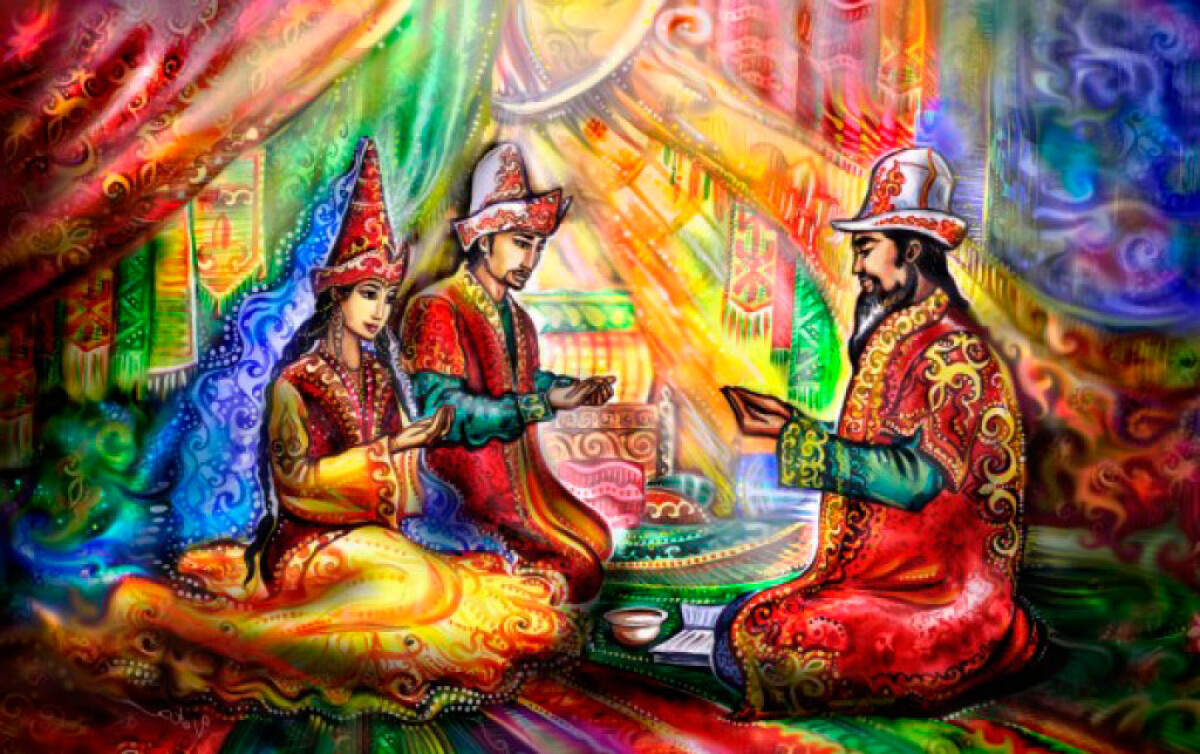 Uryn kelu for the young people is a great festivity.
After the agreement on the marriage and the first payment of the kalym, the groom made his first visit to the bride, and this first visit was called uryn kely (to come furtively).
Uryn kelu for the young people is a great festivity. In order to visit the bride, the groom’s party should follow certain customs. For example, the daughter-in-law, referring to her breathlessness of the fast walk, asked for the «entikpe» after meeting the brother-in-law or the younger sister of the bride — «baldyz korimdik». After the uryn kely they are seen off solemnly, and given presents.
Before uryn kelu, and right after the matchmaking the groom had no right to visit the house or the village of the bride, otherwise brothers of the bride would punish the groom for breaking the tradition and bad manners.
This visit was of great value in the further life of the bride and the groom. The young people, not seeing each other before, got acquainted. The first visit was usually led by a smart, quick and clever dzhigit (young man). He took various presents, and also things necessary for the wedding ceremony (rings, ear-rings, bracelets, etc.); there was a special yurta prepared for the groom and his friends in the bride’s aul, and the uryn toy (festivity) started. The next day after the groom’s arrival at the aul women acquainted the groom with the bride. All following visits of the groom to the bride’s aul and all the visits were called «kalyndyk oinau».
After the uryn toy both parties started active preparation for the wedding. The father of the groom paid the total kalym payment, prepared the cattle for the wedding celebration, appliances for the yurta, presents and other things; bride’s father — prepared the dowry, paying great attention to obtaining furniture and beautiful head dress for the bride (saukele).
The group of the groom’s side was usually led to the girl’s aul for the wedding by his mother. The groom and his routine presented gifts and souvenirs to the bride and her relatives.
For the good upbringing of the girl the groom presented his mother-in-law (ene) with «sut aky» (gift for mother’s milk and upbringing), and the father of the bride — «dzhigit tuye» (present for father’s upbringing). This might be a camel, a horse, expensive garments or horse harness.
If his father-in-law (ata) was glad with the gift, he blessed his future son-in-law.
Nobody was left without a present, neither brothers, nor closest relatives of the bride; they were presented with a pacer, hunting birds, silver saddle, coins, etc. Before the wedding there was a yurta established for the just married in the bride’s aul. The women who put it together were also presented with gifts.
Great attention is paid to the garments of the groom, who was going to get his bride. It must be elegant, so that the meeting women and girls could easily define him. According to tradition the groom was dressed in a different way, different form other dzhigits, accompanying him. The hat (boric) was decorated with uki (owl’s feathers), boots on high heels, and red chapan (coat) on his shoulders. The groom pulled the boric over his eyes, behaved himself modestly, respectably.
Otherwise, he paid the fine and was subject of mockery. Though, he could not avoid mocks and various sharp remarks from women. The groom’s horse was taken by the aul children, who had fun with it and rode it for a long time. It was an ancient tradition of the aul, which was followed with pleasure and was accepted joyfully by the habitants of the aul.
Use of materials for publication, commercial use, or distribution requires written or oral permission from the Board of Editors or the author. Hyperlink to Qazaqstan tarihy portal is necessary. All rights reserved by the Law RK “On author’s rights and related rights”. To request authorization email to or call to 8 (7172) 57 14 08 (in - 1164)
Қазақша Русский English
THE MOST WIDELY READ
Year
On How Kazakhstan Ended up as part of Tsarist Russia Recorded history of Kazakhstan. Part 2 The title of “Folk hero” was posthumously awarded to three veterans of the Great Fatherland War Union of the Archives and Library A great son of the Kazakh steppes People who eat horses will kill you Recorded history of Kazakhstan. Part 1 Burial mounds of the southwestern part of the Semirechye region The referendum on the Constitution is a significant stage of democratization Kazakhstan's participation in the Winter Olympics has a long history Rebooting a field of science and education Labels of the Golden Horde khans and Russian clergy
Polls
Materials on the topic
Labels of the Golden Horde khans and Russian clergy
From the story of a blood feud
A role of Buddhism in formation of Central Asian mythologies
The referendum on the Constitution is a significant stage of democratization