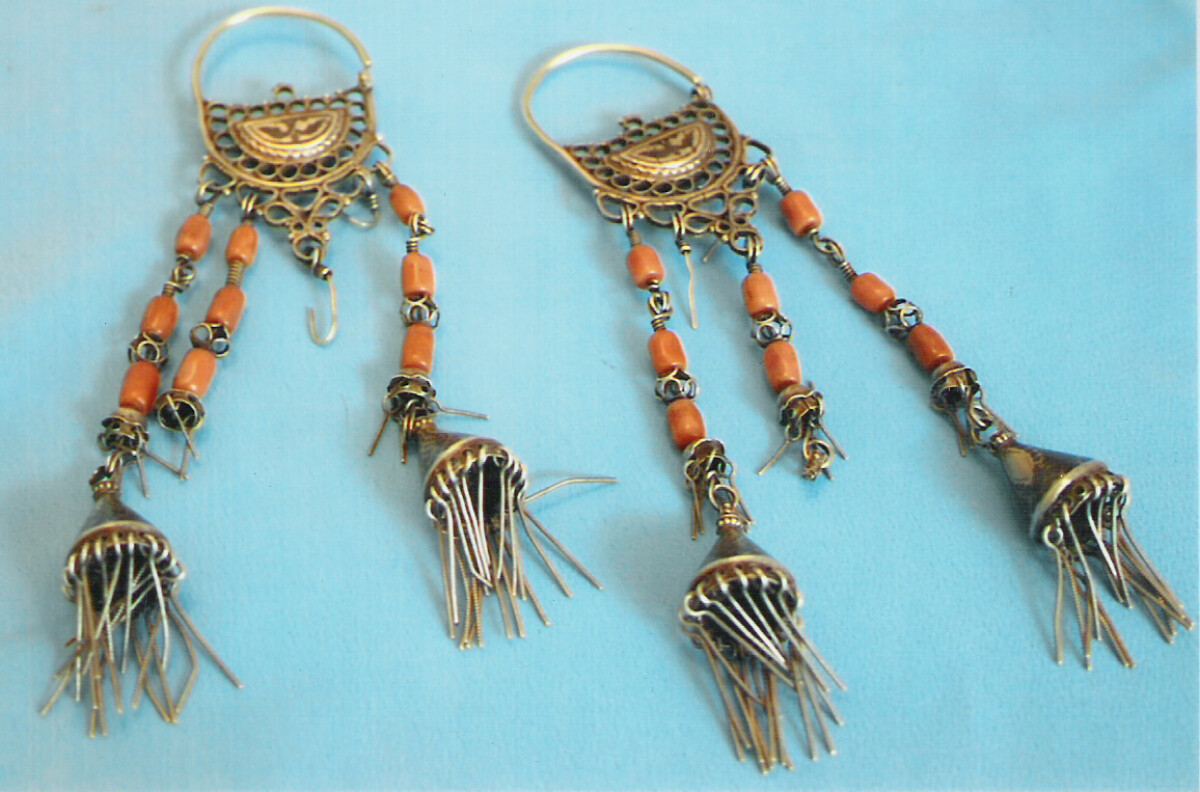 Jewelry, unlike other kinds of the Kazakh arts, which were housecraft, was of professional character, predetermined by specificity of manufacture

Jewelry, unlike other kinds of the Kazakh arts, which were housecraft, was of professional character, predetermined by specificity of manufacture. The Kazakh jewelers-zergers (“zerzar” in Persian – “gold”) worked individually, their skill was inherited.

Kazakh artisans, who worked with precious metal, created their works in decorative and applied execution. Metal – silver and gold was bought on markets of Central Asia and Eastern Turkestan. In spite of the fact that silver was relatively expensive, silver items could be met quite often. Sometimes they were pollinated with gold. Besides imported silver, silver coins of imperial stamping were also used. Various pendants were produces of this or such silver was melted down into bars for further processing.

Zerger had a set of forms (kalyp) for jewelry manufacturing.

Items produced by a zerger were various: women’s jewelry, items for clothes, toiletries, cutlery, plaques for a wooden and leather ware, musical instruments, weapons, horse equipment. Zergers were able to reveal the beauty of the metal. Silver shined after forging, sparkled due to polishing, flickered after coining in small circles, was live and vibrating due to hatching by zigzags. Precious and semiprecious stones highlighted nobility of the metal: rubies, sapphires, emeralds, diamonds, turquoise, agate, chrysoprases, cornelian, pearls, corals, nacre. Small, paste and color glasses were also used. Women’s jewelry, which was in great demand in all social classes were main products of zergers. This was determined not only by their esthetic nature, but also by a number of functions associated with customs, ceremonies will all ideological and religious complex. 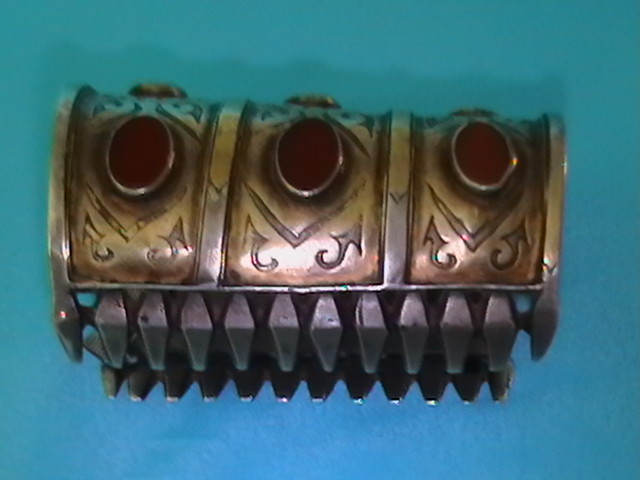 Fasteners (kaptyrma, kapsyrma, ilgek), various buttons (tuyme), triangle amulets (tumar), patterned metal plates (tana) were very popular among Kazakh women. Forms of these items were very various. Often they had an insertion of stone or glass and the stylized images in the form of a lotus, a petal, a shamrock, a bud, horns of a ram, a griffin, a fish, a bird, moon with a star, the sun. Belts were one of important components of a traditional Kazakh clothing. Men’s and women’s belts could be metal, but more often they were with leather, velvet basis, decorated with silver metal plates in certain intervals.

Removable jewelry and especially bracelets (bilezik) were very different. They were created by Kazakh zergers through hot and cold forging. Some bracelets were cut out from silver plates weaved from a silver wire or they were hollow inside, made by blasting.

Shashbau (shash – hair, bau – a ribbon) a long chain of complex weaving (often double or triple), a cord, a ribbon with sewed coins, pearl metal plates was very popular. Shashbau ends were with magnificent silk brushes, made from cords or silver pendants. Shashbau fastened at the base of plaits and went down along all the length of plaits.

Temporal shekelik, suyirtpa, fastening for headdress’ loops or for hair at a temple were worn on a solemn occasions. Temporals had pendants on long chains and were often connected with hanging figures by a decorative chain (passing under a chin).

Earrings (syrga) were favorite and always wearable jewelry for women. Ay syrga (moon earrings) sometimes with a carved star on the inside was the most popular ornament.

Zergers produced many silver hair picks (tarak) and toothpicks (tys shukysh), as well as various gold jewelry, but they could be found rarer due to their expensiveness.