A welcoming report from the Russian guest at Nazarbayev University 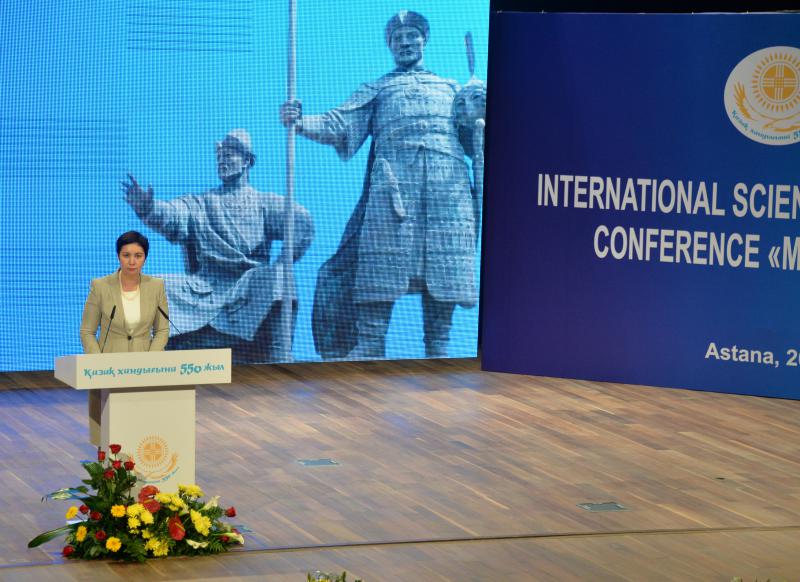 Senior officials and professors being invited to the celebration of the 550th anniversary of the Kazakh khanate to Kazakhstan, Astana delivered their speech, and one of them was Irina Konovalova.
The State Secretary of the Republic of Kazakhstan Gulshara Naushankyzy Abdykalikova opened the International Scientific and Practical Conference on behalf of the President Nursultan Abishevich Nazarbayev. From around 3 to 6 o’clock in the afternoon the Plenary Session of the Conference under the name “Mangilik El” took place. Among the presenters performing last there was the Doctor of Historical Sciences Irina Gennadievna Konovalova.

Irina Gennadievna Konovalova, Deputy Director of the Institute of World History, the Russian Academy of Science, Doctor of Historical Sciences

— It is understandable that the 550th anniversary in the formation of any statehood is the notional date. States do not appear all of a sudden, the state formation is not an instantaneous phenomenon, but the longstanding process basing oneself upon on the already-existing traditions. Yesterday, at the round table in the Institute of State History it was discussed about powerful traditions of Turkic khaganates and the Golden Horde, first of all. However, the Kazakh Khanate is not only the successor of the previous state formations but also it has the principal distinction from the former states. The most meaningful peculiarity of the Kazakh khanate is the appearance of the new term, ethnonym “Kazakh” which was marking the formation of new ethno-political community of the Kazakh people. Thus, the time of the emergence of the national statehood is considered to be the crucial milestone not only in political, but also in ethnic history of the Kazakh people.

Regarding the relations of Russia and Kazakhstan it can be said that the relations of two countries are never simple, they develop in certain context. Each part in a natural way pursues their own aims, that is why, each states give various evaluations on different events. Comprehensive research of that process, understanding of the logic of the reasoning of each part — the subject of certain research, search for the new sources, improvement of the methods of their analysis. Anyway, the most important thing is the result and it is what we have now. To date, Russia and Kazakhstan are two amicable countries, each of that builds its future being supported by its own traditions and respecting other ones. In the Institute of State History we are glad to cooperate with the historians of Kazakhstan and sincerely hope for its prolongation and deepening.

Use of materials for publication, commercial use, or distribution requires written or oral permission from the Board of Editors or the author. Hyperlink to Qazaqstan tarihy portal is necessary. All rights reserved by the Law RK “On author’s rights and related rights”. To request authorization email to mail@e-history.kz or call to 8 (7172) 57 60 13 (in - 1163)
Қазақша Русский English
MOST READ
Month Year
The referendum on the Constitution is a significant stage of democratization
Philosophy of the Emblem
The rural akims: the country's hope is in the elections
Kazakh historical drama Tomiris premiered in Istanbul
Stolypin about the worries and hopes of immigrants to the Kazakh steppes
ALASH IDEA IS THE PROTECTION OF KAZAKH STATEHOOD
A tireless explorer of the Kazakh land
SWITCHING TO THE LATIN ALPHABET – UNITE ALL KAZAKH PEOPLE
Kunaev Dinmukhamed Akhmedovich
People who eat horses will kill you
Kazakhstan's participation in the Winter Olympics has a long history
Rebooting a field of science and education
Recorded history of Kazakhstan. Part 1
Materials on theme
Archaeologists from Uralsk demonstrated artefacts from the grave of Golden Woman
A round table meeting "Local History: history, current problems and prospects of development"
Military musicians to sing wartime songs in Astana
Historical meaning of the battle of Atlakh in the fate of Kazakhs