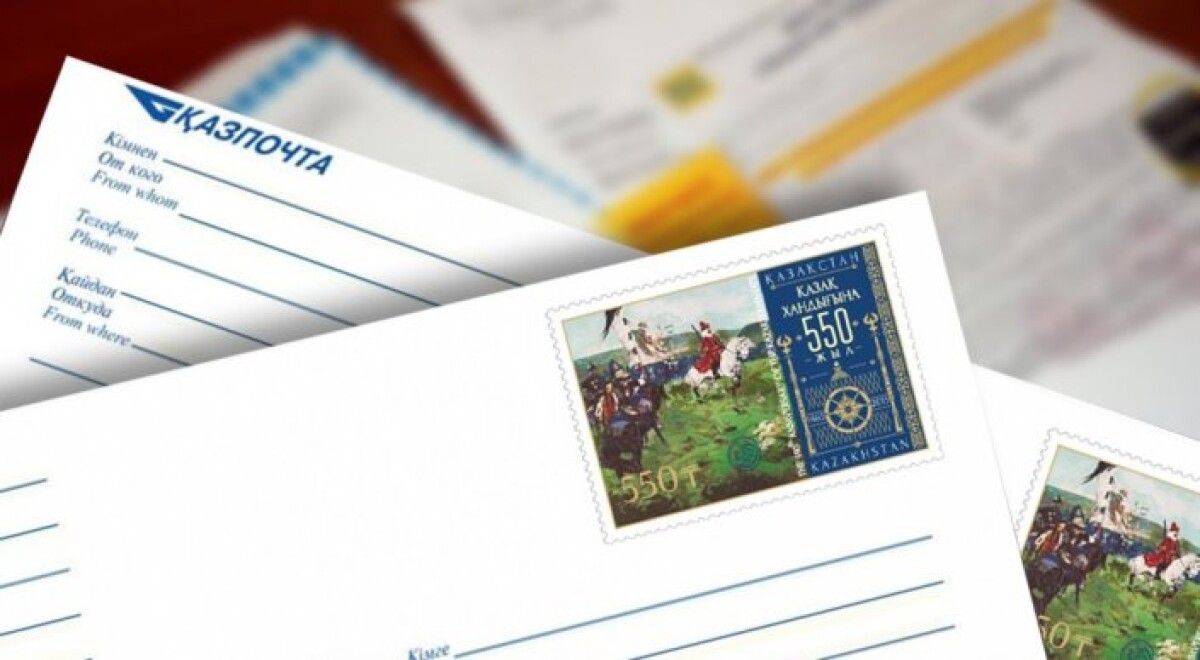 A solemn ceremony of adoption of the stamp devoted to the 550th anniversary of the Kazakh khanate was held in Astana today. The stamp is released by "Kazpost" JCS. It is made in the form of sheetlet of six pieces, offset in six colors. The size of stamp sheet is 156 to 148 mm, the size of the stamp is 52 to 36. The issue is 5040 pieces, a nominal value of 550KZT. The stamp sheet is printed at Republican State Enterprise «Banknote Factory of the National Bank of RK».

The design of the stamp is made by an artist Rakhimzhan Akhmedin. «We looked through many artists who illustrated the Kazakh khanate, there were many materials. As you know, instalment of the Kazakh khanate was in Borovoye, there is a museum. I saw a painting there, that depicted the spirit of that time. A started make a design looking at it. As you have noticed, there is a wheel on the stamp. It carries sacral meaning — a nomadic lifestyle. There are elements of the yurt, that is symbolism», said the designer, noticing that a new illustration which depicted Abylay khan was created.

The ceremony of stamp cancellation was held in the National museum of the republic. The right to adopt the stamp was presented to the Deputy Prime-Minister of Kazakhstan Berdybek Saparbayev.

«This year we are celebrating the 550th anniversary of the Kazakh khanate. As you know, there is no future without past. There are no people without history. Today „Kazpost“ JCS is issuing a new post stamp, it is a prominent event, it is a support of „Kazpost“ management, Ministry in order to show our history to the world and what the Kazakh khanate means. We have published 500 books, devoted to the 550th anniversary of the Kazakh khanate. All this contributes to show all the world that there is such country as Kazakhstan. It has a right to be an independent country in the world community, it has long historical roots», said B.Saparbayev.

The main celebration will be held on the square near «Kazak eli» monument. The territory near the monument «Kazak eli» will turn into one big festive ethnic village for three days in the period from September 11 to 13. The folk festival will be held with participation of all regions of Kazakhstan on the square. 50 yurts, two big stages, sport grounds, altybakan, taikazan and others will be organized on the square.

The competitions on national kinds of sports as «kazak kuresi», «arkan tartu», «togyz kumalak» will be organized in the ethnic village. The exhibition-fairs of decorative-applied art, workshops of craftsmen, concerts of the best creative teams and gala-concert with participation of Kazakh singers will be included in the program of the festive events.