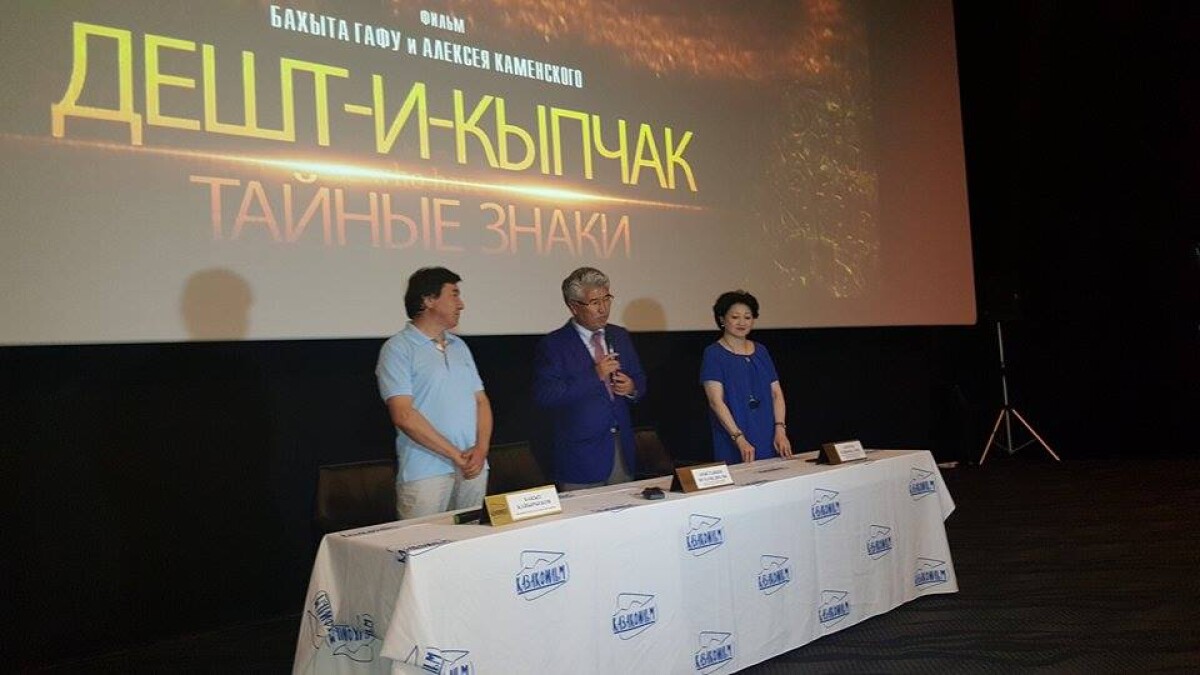 The premiere of the two episodes of the documentary "Deshti-Kipchak. Mystic symbols" took place in the Saryarka Mall on 15 July 2015 as a part of the celebration of the 550th anniversary of the Kazakh Khanate. The film was produced on behalf of the Ministry of Culture and Sport of the Republic of Kazakhstan and the Kazakh Research Institute of Culture, as reported by the Ministry press service. The director and scenarist is Bakhyt Kairbekov. Co-director is Aleksey Kamensky.

The event was attended by outstanding statesmen and public figures of the republic, representative of the local cultural community and the film crew. The press conference with the film creators followed the presentation.

— The film "Deshti-Kipchak. Mystic symbols" tells about ancient monuments of the Kyrgyz writing. In the 11th century, the Kypchak tribes gradually settled in the southern and western parts of Kazakhstan, the Volga region, Caucasus and the Black Sea coast. The Russians knew them as the Polovtsy. The nomadic Kypchak tribes crossed the Volga and moved to the West, and spread their influence over the territory reaching the Dnieper by the 12th century. From this period and until the 15th century the vast territory between the Irtysh and Dnieper was mentioned as "Deshti-Kipchak" or "Kypchak Steppe" in western and eastern chronicles," said Arystanbek Mukhamediuly, Minister of Culture and Sport of the Republic of Kazakhstan.

The first episode of the film looks at the history of close relations between the Kypchaks and Armenians. They worshiped Tengri, God of the Kypchaks, spoke Kypchak language and left more than 30 thousand pages of priceless written monuments of both literary and conversational Kypchak language.

The written monuments assert that Kypchak language flourished in Europe, and it was impossible to communicate on the Eurasian continent for people who didn’t know Kypchak language. More than 700 years ago it served as English, French and Russian today. It is also known that Egyptians spoke Kypchak language, a forefather of the most Turkic languages.

The second episode of the film tells about the unique Codex Cumanicus that was donated to a Venice library by Francesco Petrarca, a prominent poet the Renaissance, in 1362. The book was kept at the Library of St Peter’s Basilica.

Codex Cumanicus (means Kypchak dictionary) is a famous written monument of Kypchak language dated back to the early 14th century. It contains the richest material for investigation.

Aleksandr Garkavets, a famous expert in Kypchak writing, tells about the book:

"This unique book has preserved sheet music of anthem in Kypchak language. The film ends with this anthem performing by a choir thus taking us back to the Middle Ages, a period of our ancestors — the Kypchaks.