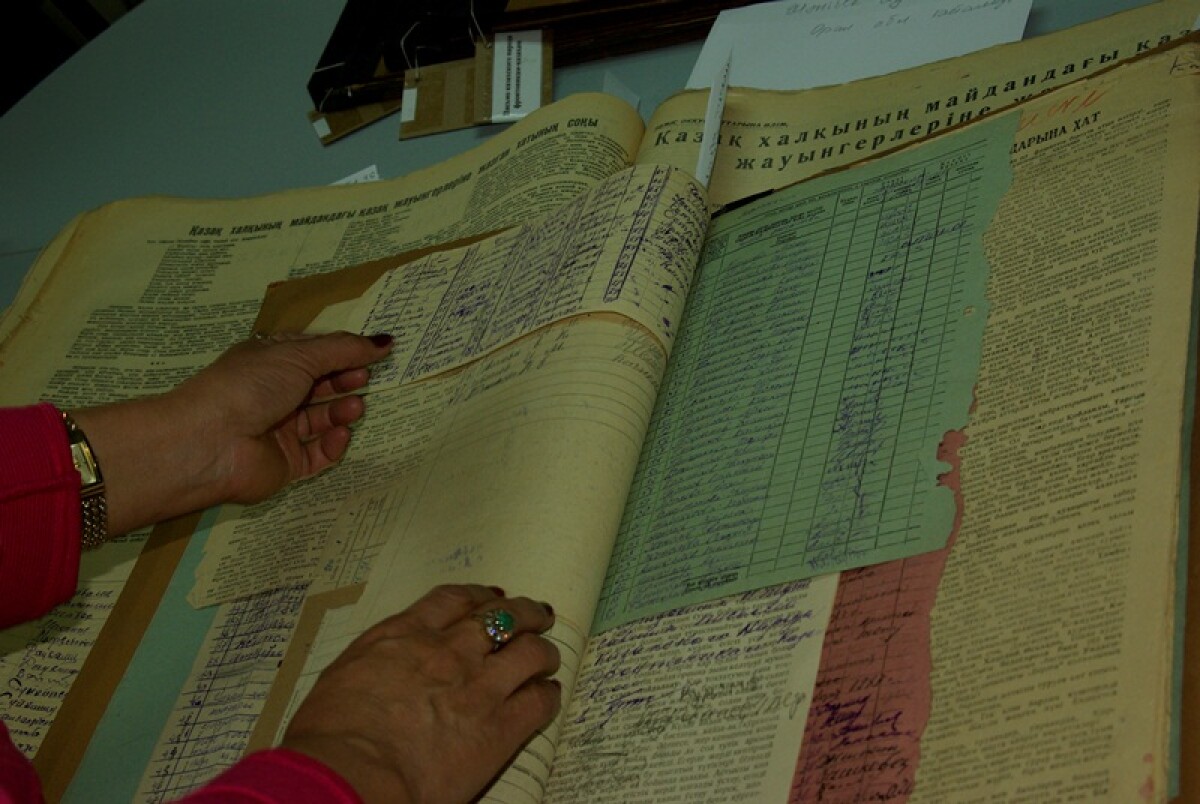 Documents that confirm organization of mass campaign for petition “Letter of the Kazakh people to Kazakh soldiers at the front” are found.

Documents that confirm organization of mass campaign for petition "Letter of the Kazakh people to Kazakh soldiers at the front", which was published on February 7, 1943 in the newspaper "Socialist Kazakhstan", are found.

According to Alkiya Rakhymbayeva, Director of Republican State Enterprise "Center of Scientific and Technical Information on Document and Archives", these documents were found incidentally during recent inventory works. Certainly, famous letter and message that was signed by more than 2, 6 million people were published in newspapers at different times. However, there was no place where it could be openly discuss about documents, which confirms organization of the national campaign in the regard with this letter.

"In the library of our archive there is big newspaper fund. It keeps 281 of them. The oldest newspaper was released in 1870 in the city of Verny (now Almaty). Last year we began to work on restructuring of the fund and creation of the catalog. This work lasted more than a year and two months. Recently my girls came and told: "Alkiya, some strange documents, which are do not look like newspaper, were found". I told them: "Bring them, let’s see". They brought nine big documents", said Alkiya Rakhymbayeva.

And then she said that she opened these documents and was very surprised. She even shed a few tears when she realized what documents they are.

"It is unknown when and who gave us these documents. They were found for the first time. No one searched for them since I became the director. According to date when these documents were written, the campaign for petition was conducted in January, 1943. What has been done during this campaign? In each area the text of the letter was printed in the newspaper format in large quantities. Thus, responsible person organized meetings and acquainted people with these letters in collective and state farms. Protocol was made on each meeting", — said A. Rakhymbayeva.

In her opinion, these found documents are invaluable for history of Kazakhstan. From them it is possible to learn what was a social and economic situation in the country, structure of inhabitants of settlements, their exact number who as subscribed.

She believes that these documents are priceless for the history of Kazakhstan. According to them we can find out socio-economic situation in the country, structure of settlements, their exact number also who and how signed.

"It is so pleasant to see these papers with signatures of our ancestors who survived till nowadays. Looking at them, it is understandable that the situation at that time was difficult. Everyone signed as they could — on paper with feather or pencil. Some of them instead of signature put plus or line. Who remained in the villages? They were elders, sick and disabled people also kids.

Everyone participated in this campaign. With big enthusiasm they wrote wishes to their sons and daughters, relatives to safely return from the front. From these documents it is clear shown spiritual power and persistence of our people. I think that these documents require scientific studying and to be discovered by our generation", — said A. Rakhymbayeva.

Today 9 documents were found. They include protocols only from Guriyev, Ural, Kyzylorda and East Kazakhstan regions.

There was special place under the text of the letter in newspaper where people wrote names left signature. Everyone signed and one person made the list. Signatures were in Cyrillic, Arab, Latin and Korean alphabet.

Considering that 2, 6 million people signed letter to veterans then it would be surprise if the same documents would be found in regional archives in the future...