Home News Other History in stamps 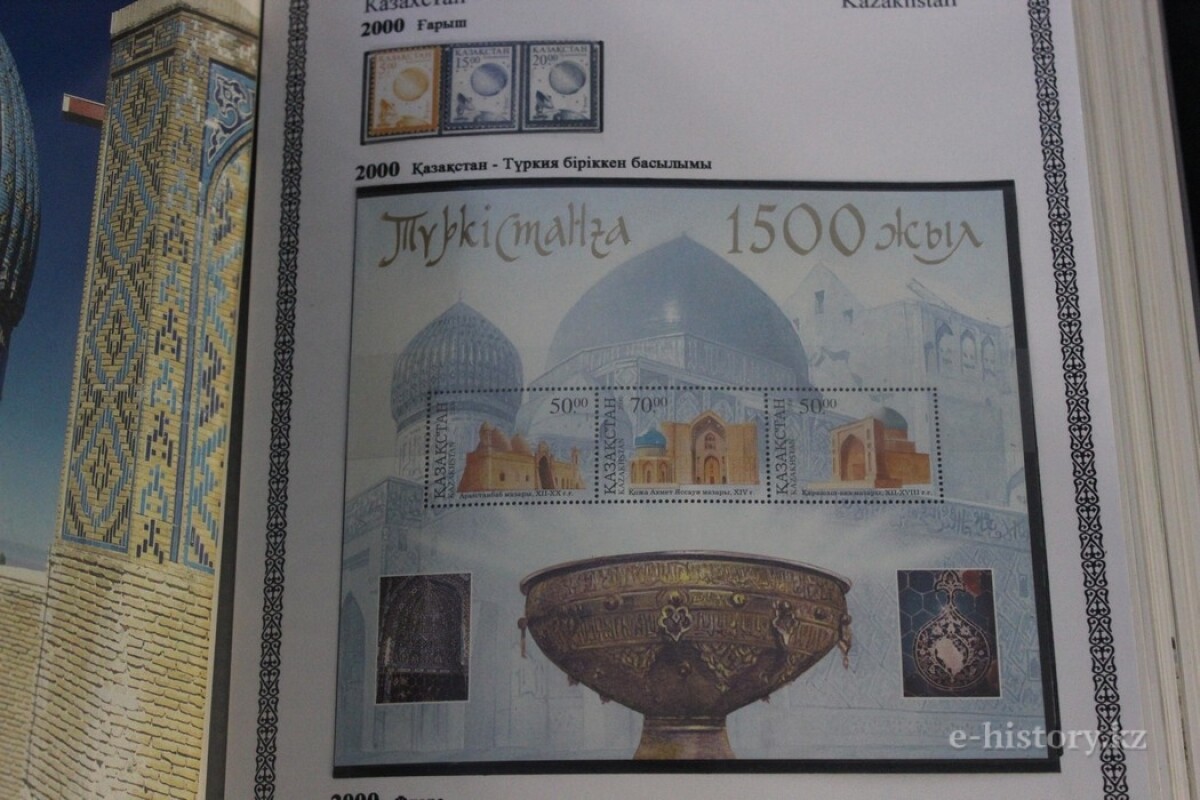 Who knows history of Kazakhstan stamps? Certainly, they are collectors, or as they called philatelists, who know everything about stamps.

Kadyr Amanzhol and Konstantin Yakovlev, with whom we got acquainted at a meeting of philatelists in Astana, know everything about stamps. They collect stamps more than 50 years. 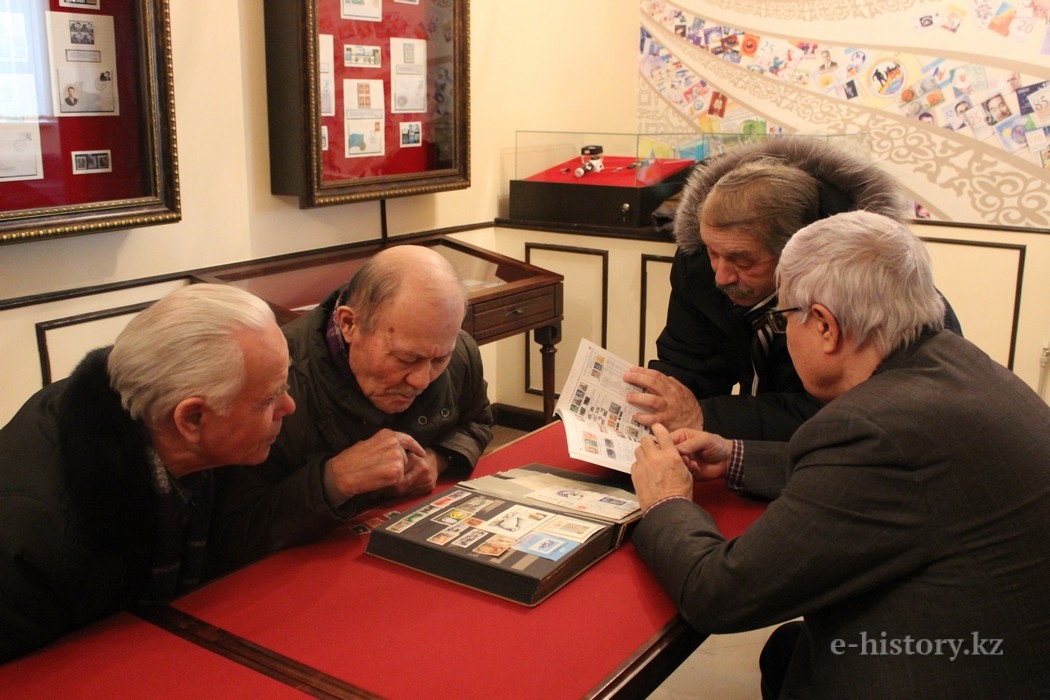 It is known that first Kazakhstan stamp was released in 1992 and it was called "Golden warrior". It was the stamp of the new independent state. It was created by D. Mukhamedzhanov. He is the author of the majority of Kazakhstan stamps. 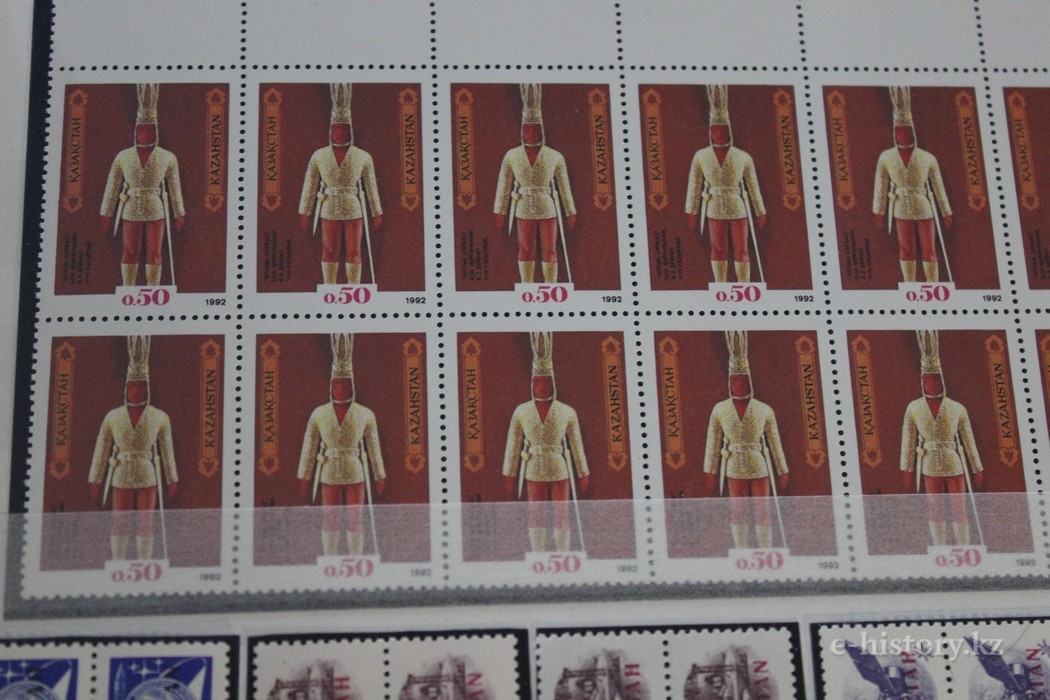 Although, according to philatelists, chronologically the first stamp was stamp that was released in 1976. But this stamp was issued in Soviet period, so to consider it as full-fledged stamp of the independent state is impossible. 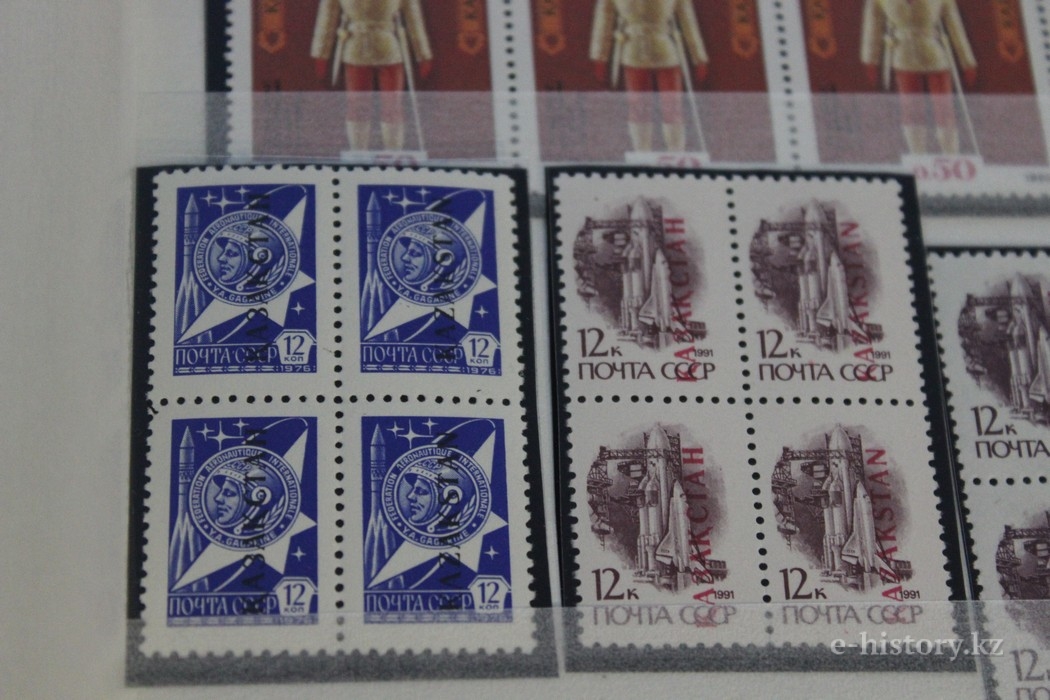 Konstantin Yakovlev said that in the beginning of 1990 Kazakhstan had a lack of polygraph equipment and thus majority of stamps of that time were printed in China. Also stamps of our country were printed in Norway, Germany and in recent times in Belarus. So, as we can see that majority of our brands are printed abroad.

"Kazakhstan stamp "traditions" are still very young. Even in Russia, the successor of the USSR still has gaps. European countries have rich stamps’ tradition which was settled many years ago. Stamps of countries like Switzerland and France considered and called classical" — says philatelist Konstantin Yakovlev.

Today, according to collectors, independent Kazakhstan issued 700 stamps. Compare with Russia which annually releases 120 stamps, Kazakhstan releases from 25 to 40 stamps. According to our experts it is enough for our country.

Kadyr Amanzhol invited us to his house to show his collections of stamps. It took a while for him to collect stamps with paintings of the USSR. Later he got in stamps with foreign painting. "There is no need to go to museums" — said jokingly the collector. 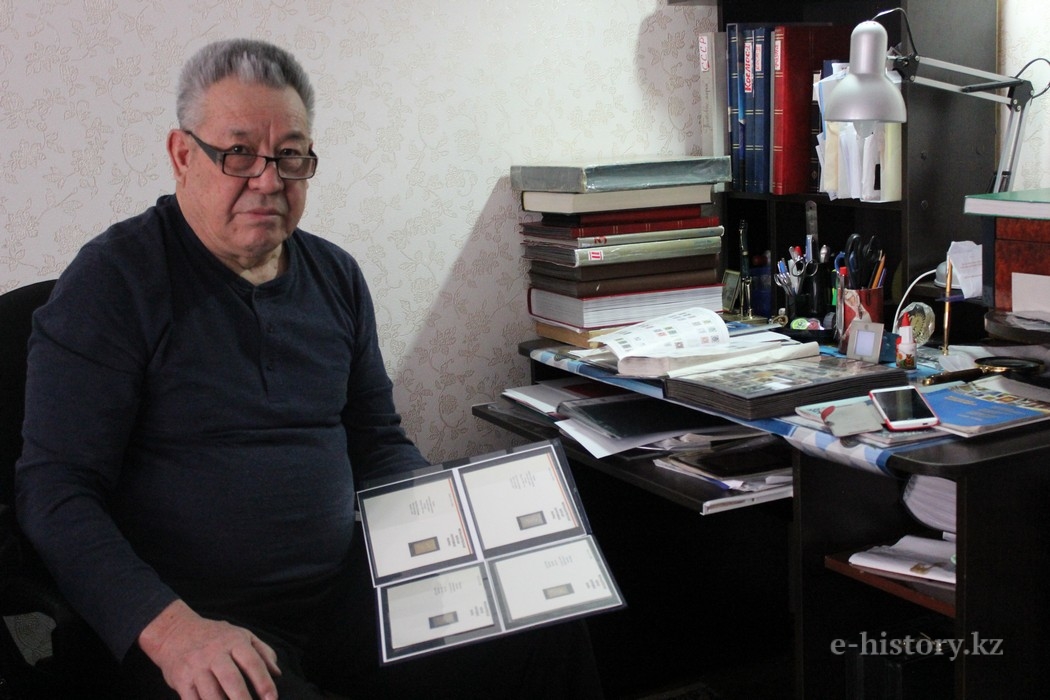 During the Soviet time when it was difficult to get something from abroad he managed to be the collector of huge amount of stamps from different countries. For example, he has stamps from France, Poland, Manama, Congo, Cayman Island, Romania, Korea, Republic of Chad, Hungary, Paraguay and England. They are so unique and fine, the collection is the real work of art. 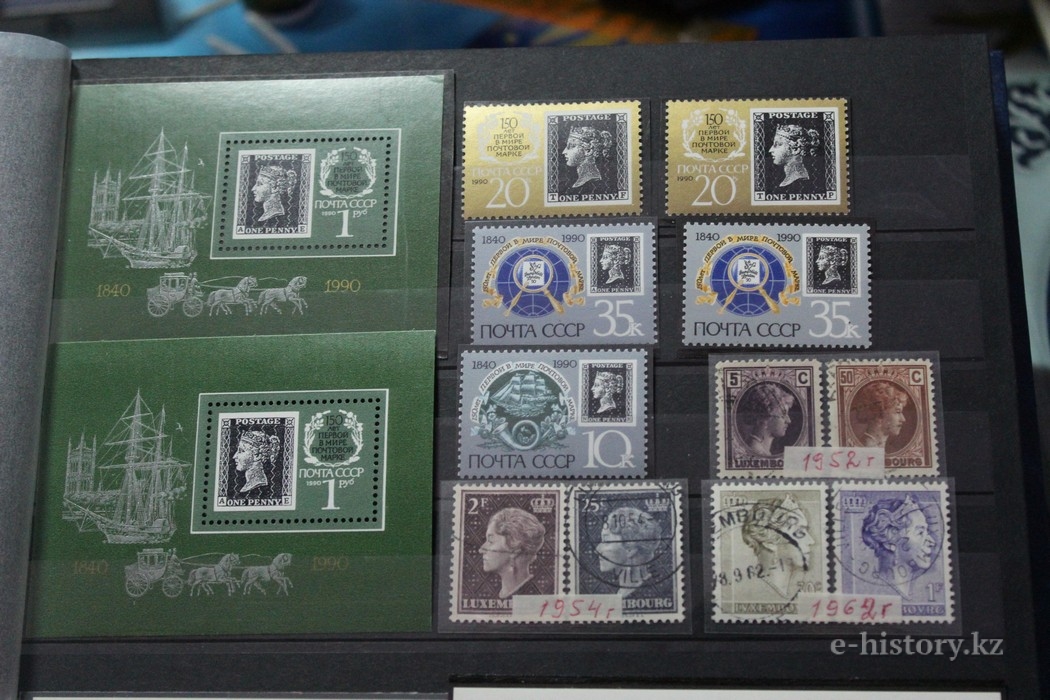 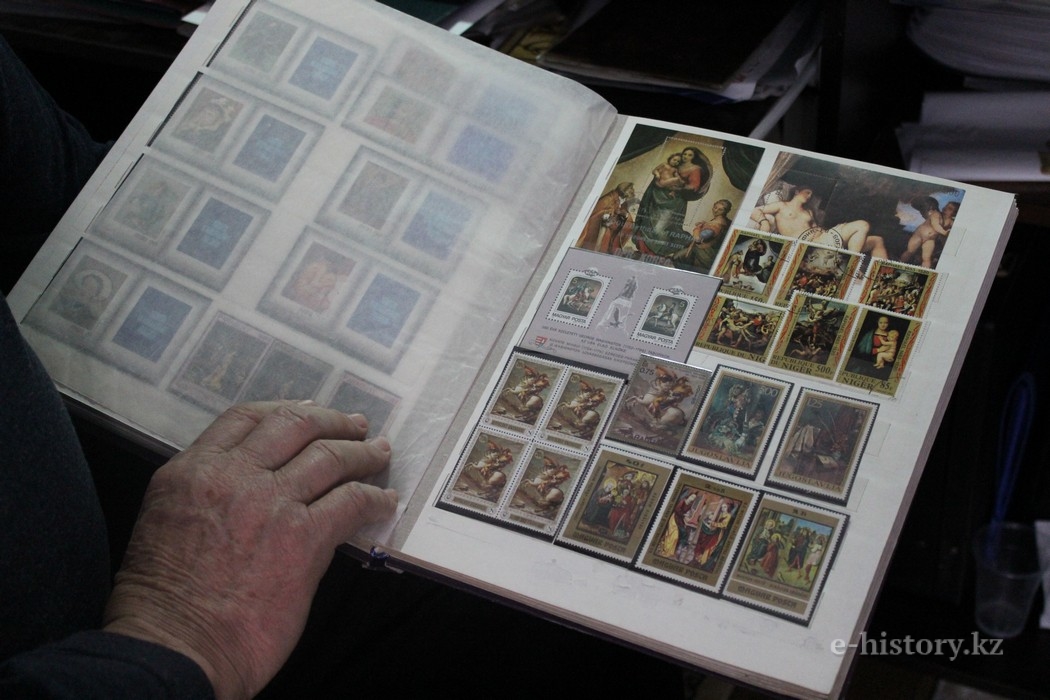 According to the collector, stamps are released regardless of economic and political affairs in the country. Even during the Great Patriotic War production of stamps did not stop. The stamps had military subject, they were printed with the image of military forces and weapons.

Magnifying glass, tweezers, glue and album for stamps — all of these are collector’s tools. Also there are catalogs of stamps according to which philatelists check the cost of all stamps. In Soviet period it was the collections of Solovyov and Zagorskyi. Today such catalogs are issued by Kazpost, also collectors use the private catalog "Alex" which is available on the Internet. 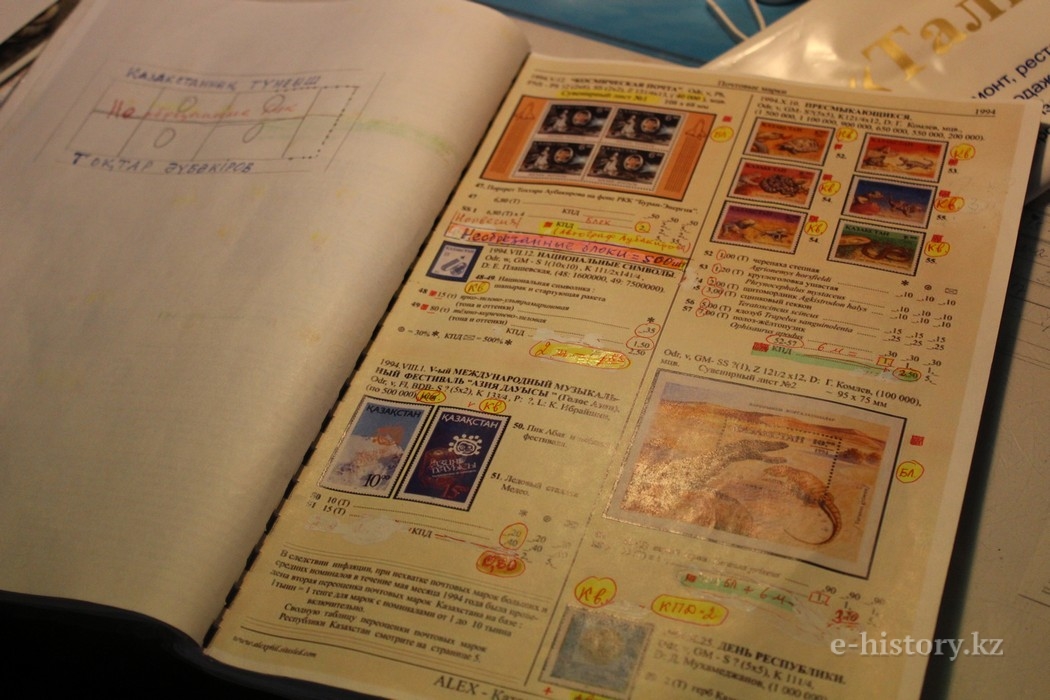 Philatelists appreciate stamps with some "defects". It can be inaccuracies in writing of words (there are stamps where word "Kazakhstan" was written with mistakes. Usually problem in such cases with the letter K), reverse images, absence of frames, errors in digits and so on. It is a production defect, but for collectors such stamps become rare, and their price increases every year. Philatelists literally chase such rarity, as all issued stamps are necessary for a full collection.

Philately — it is both the real science and the strongest passion. Once having started being interested in stamps, it becomes hobby for a person and he turns into the collector. Certainly, it is not a free pleasure, requires money. It is very rare when philatelists exchange stamps, mostly they purchase and sale the copies that lacking in collection.

Kadyr Abulkhanovich has all kinds of stamps that released in Kazakhstan. He even created a special album with signatures and illustrations. We would not be able to show all 700 stamps, but some of them we will show you. Traditionally Kazakh stamps are printed on different topics, also for holidays, special occasions and anniversaries. 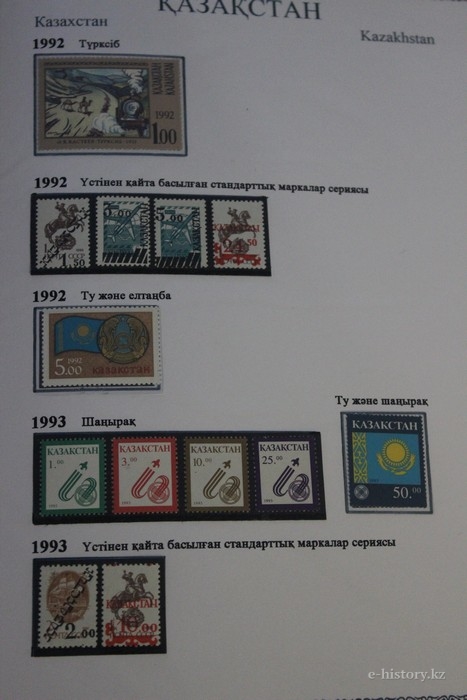 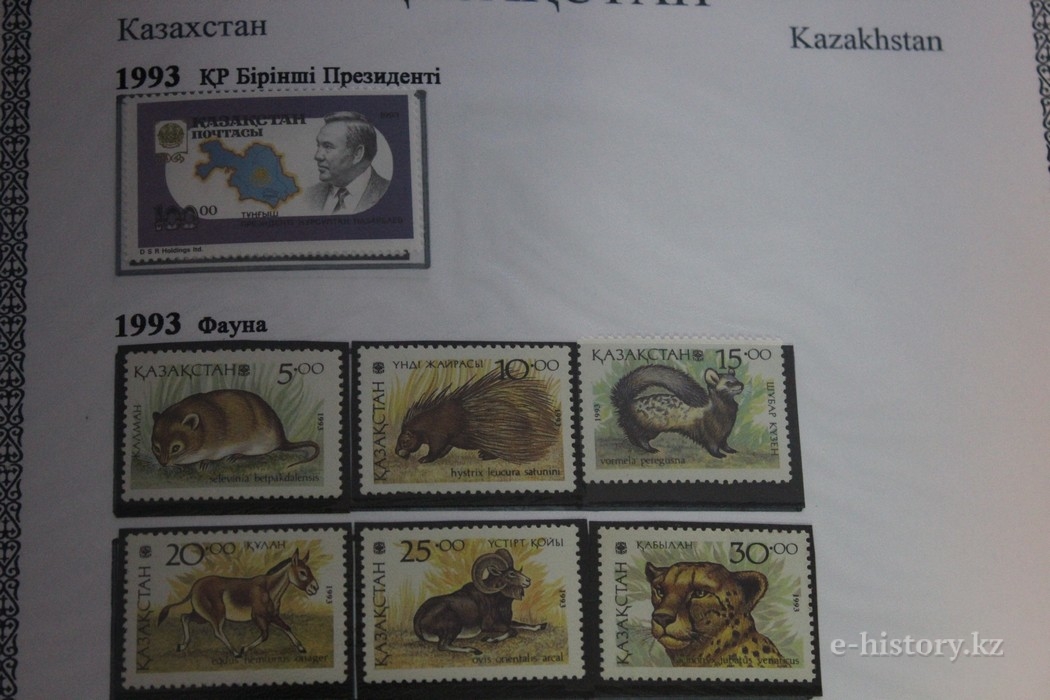 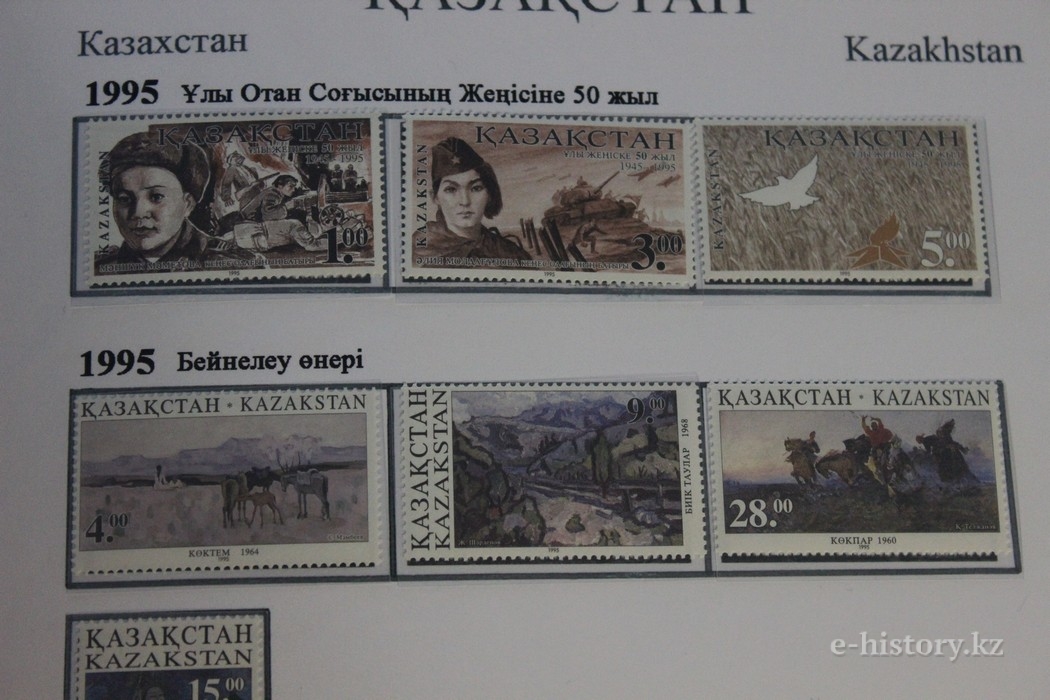 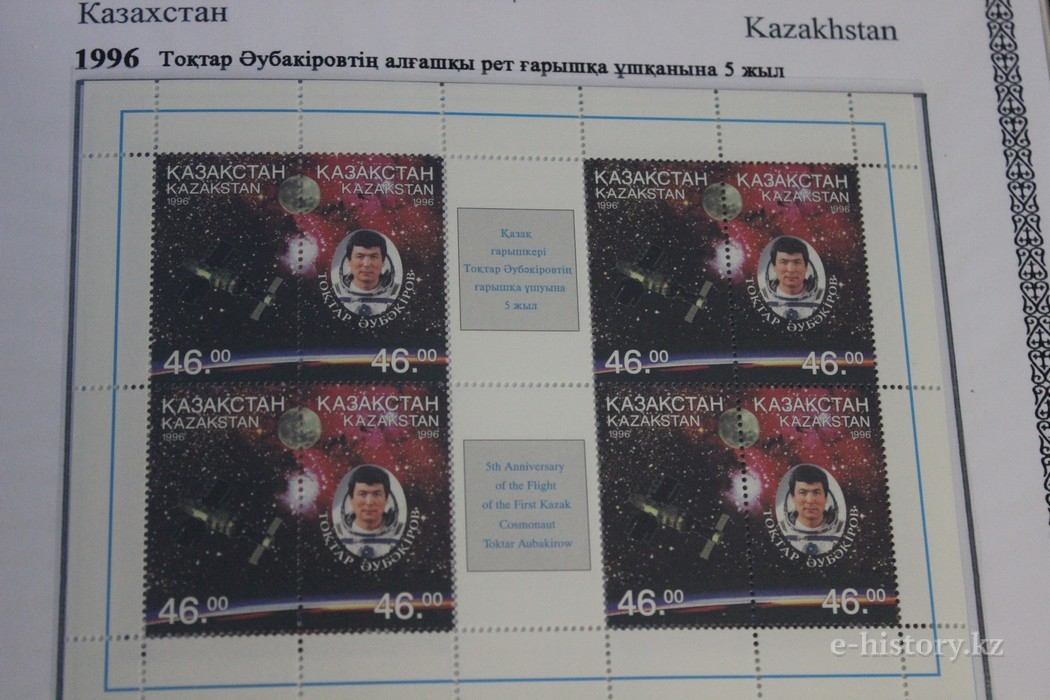 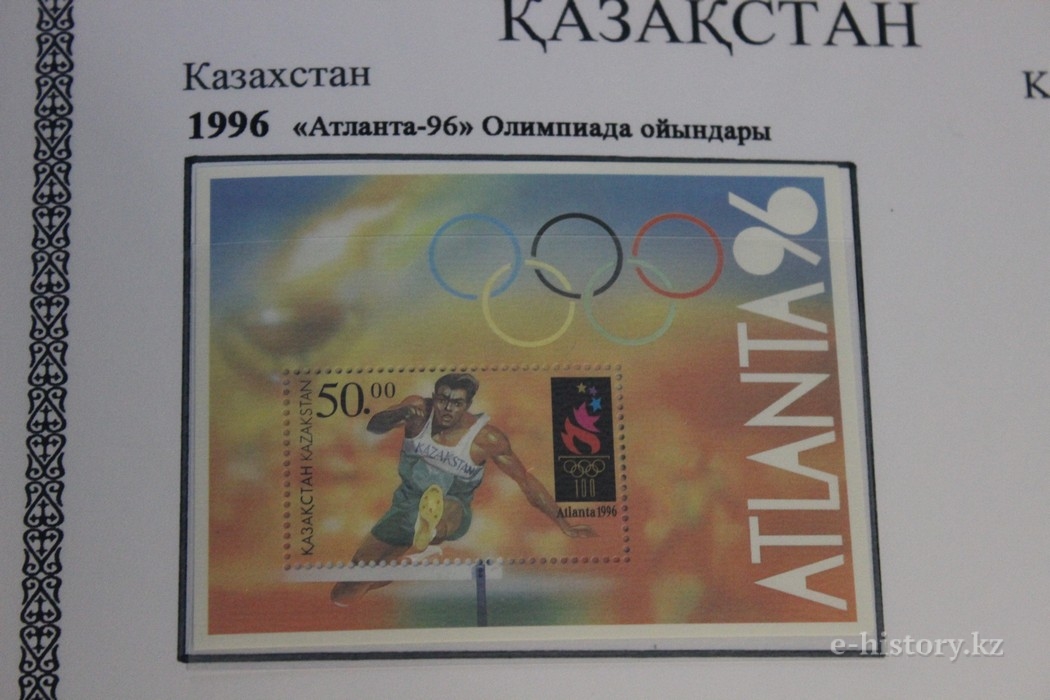 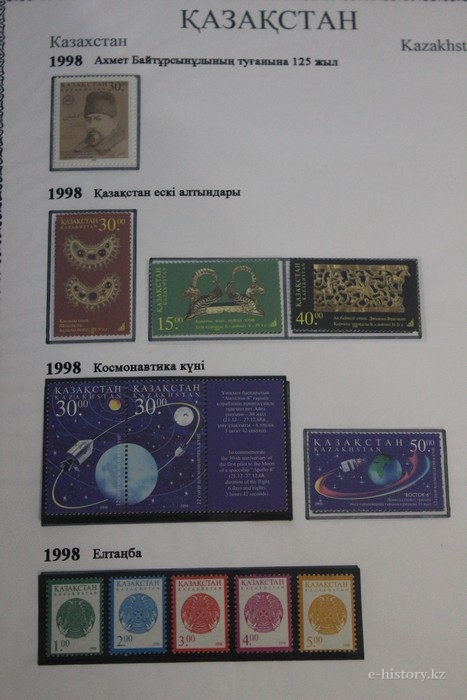 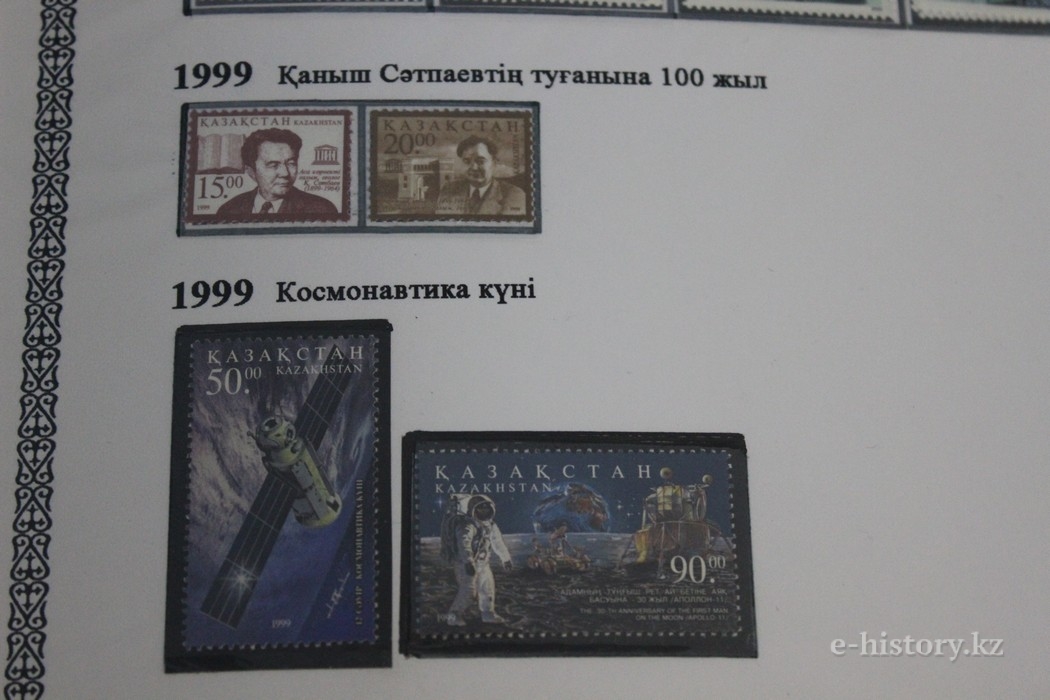 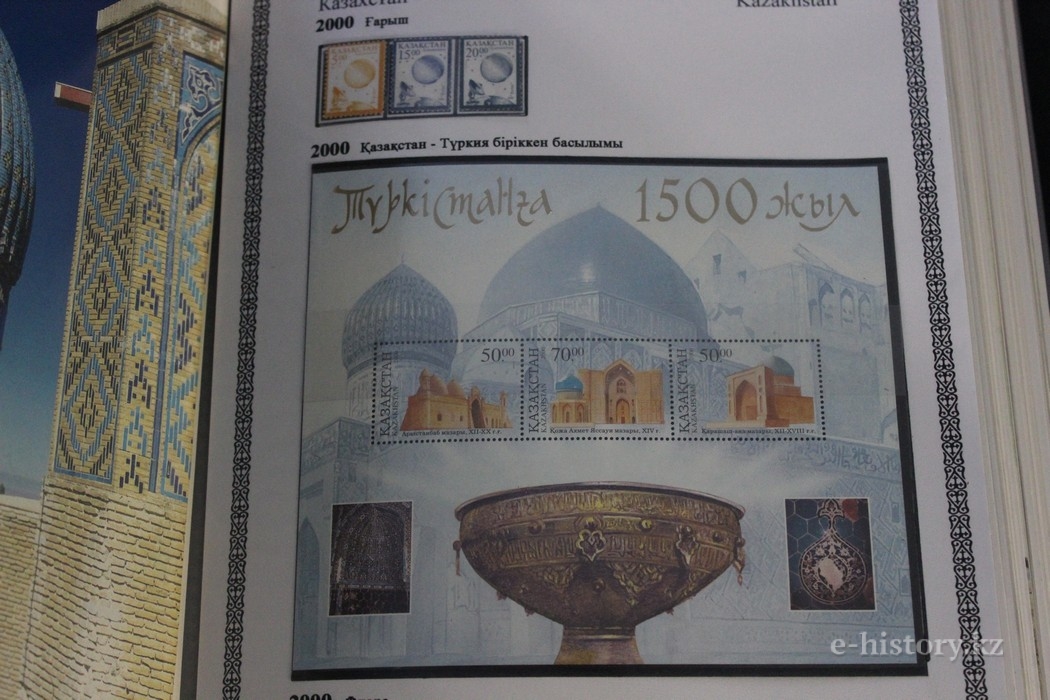 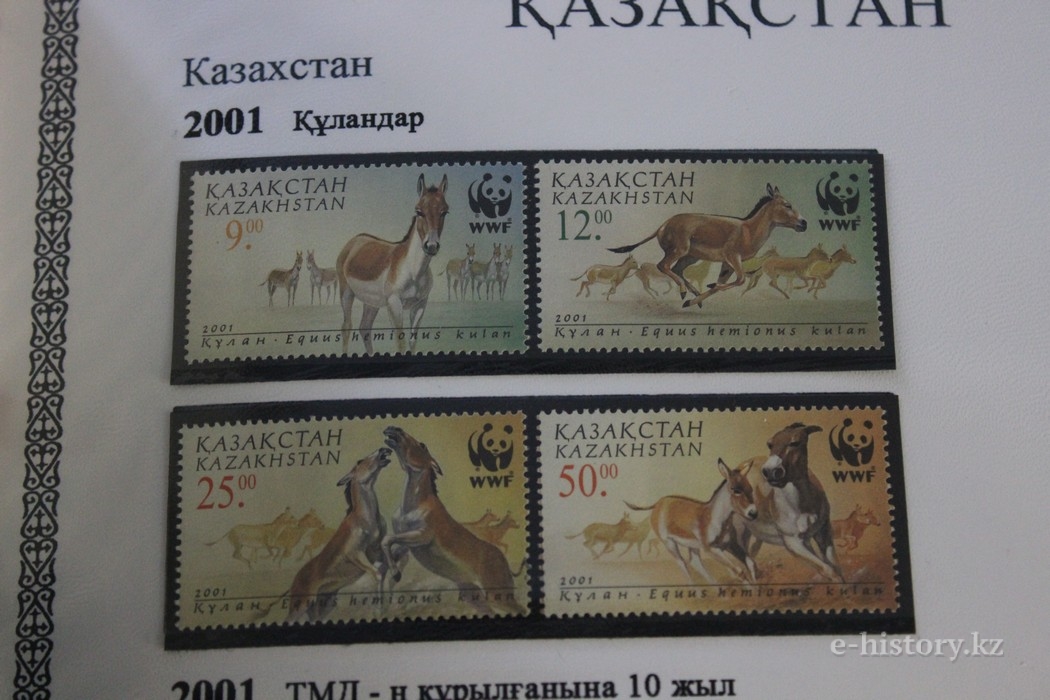 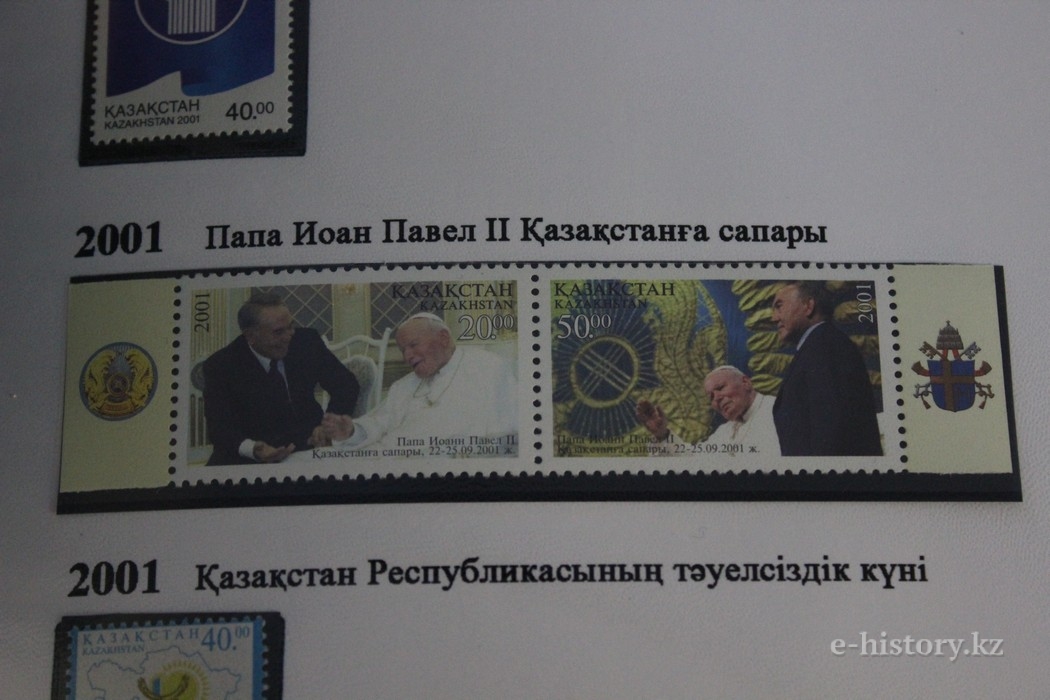 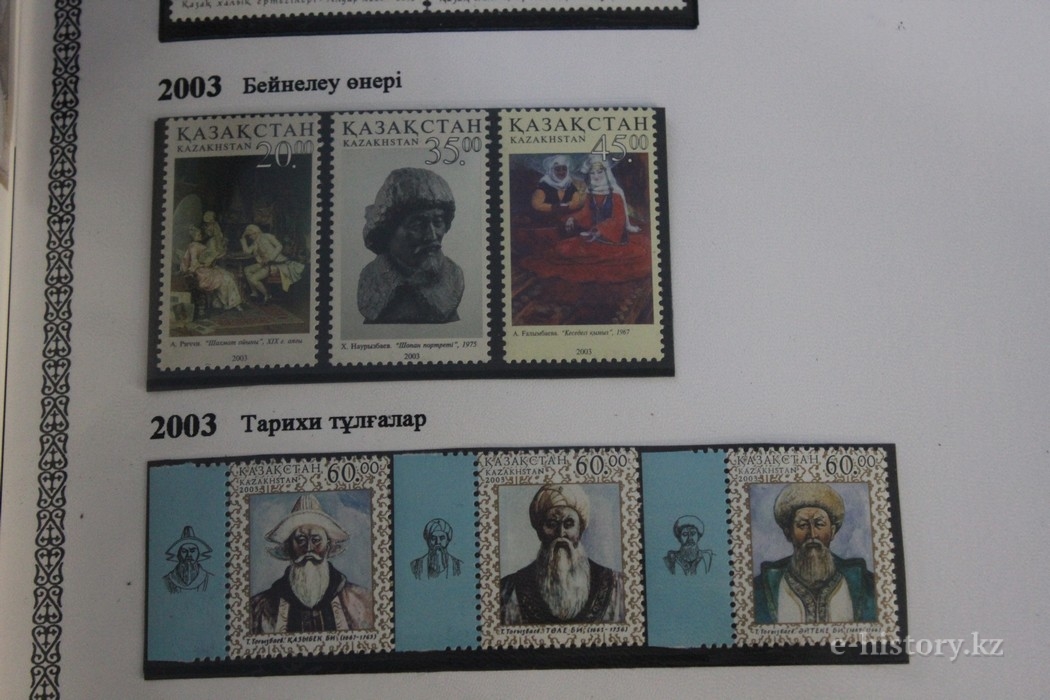 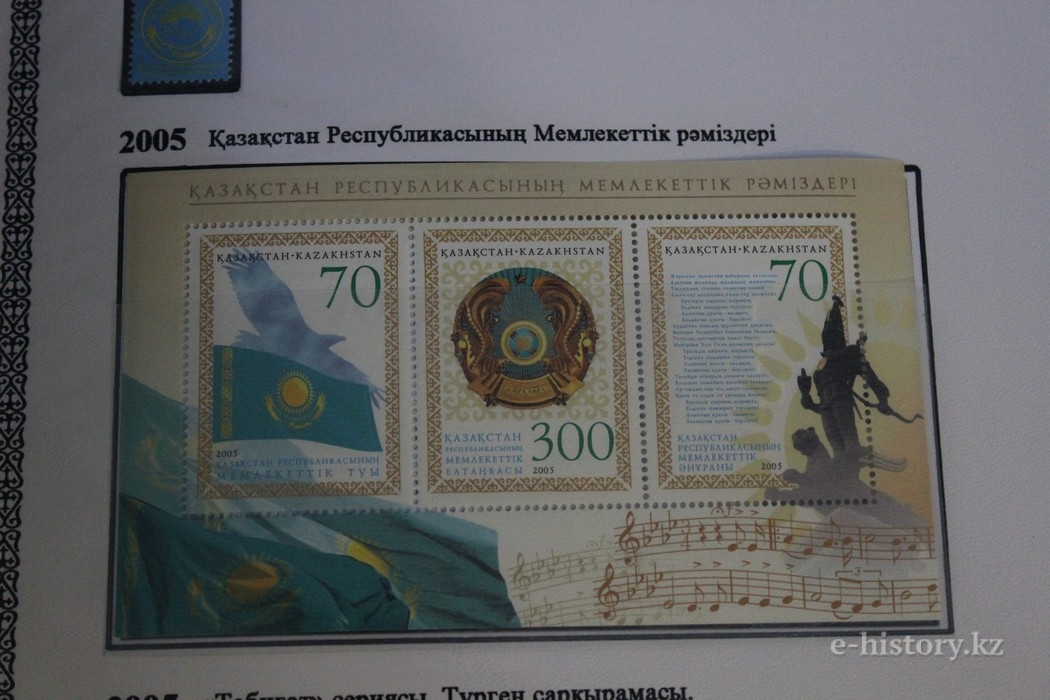 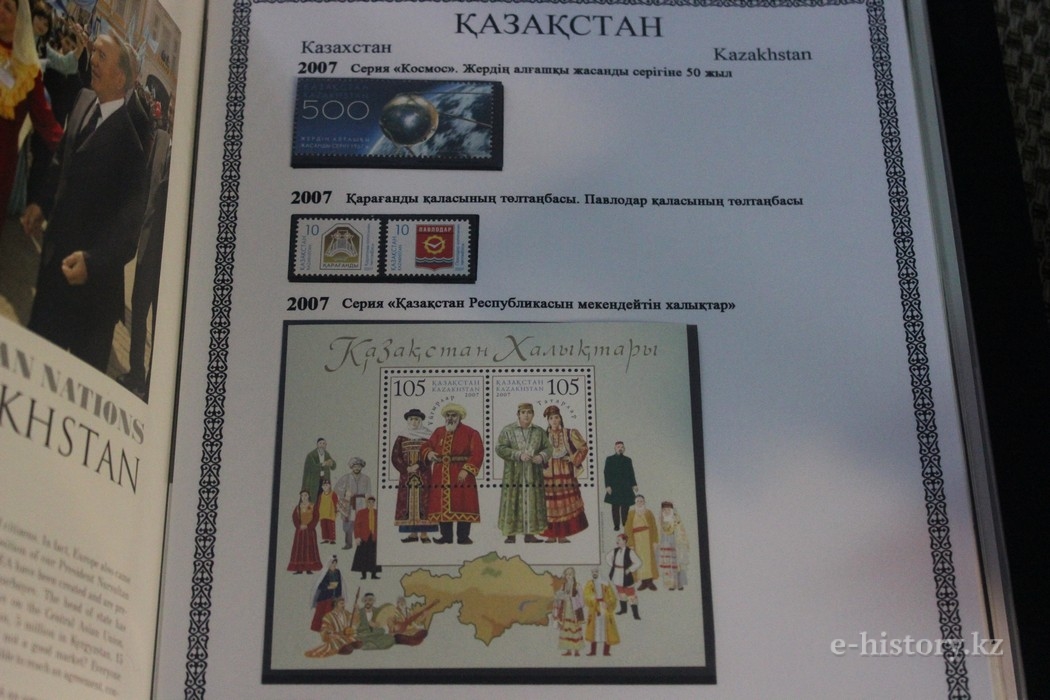 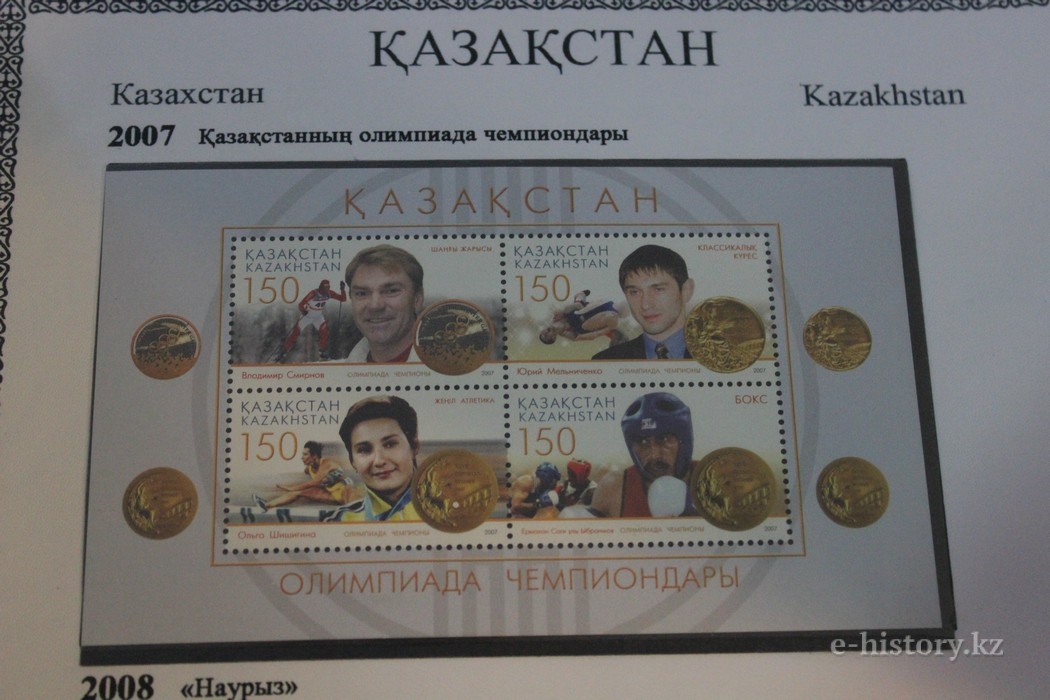 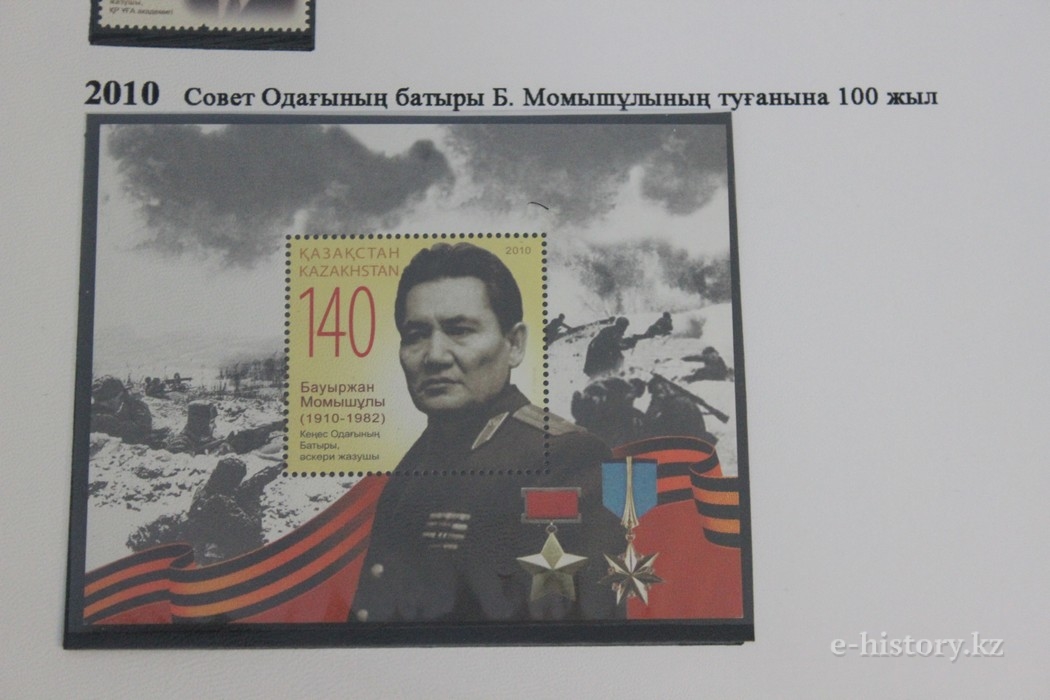