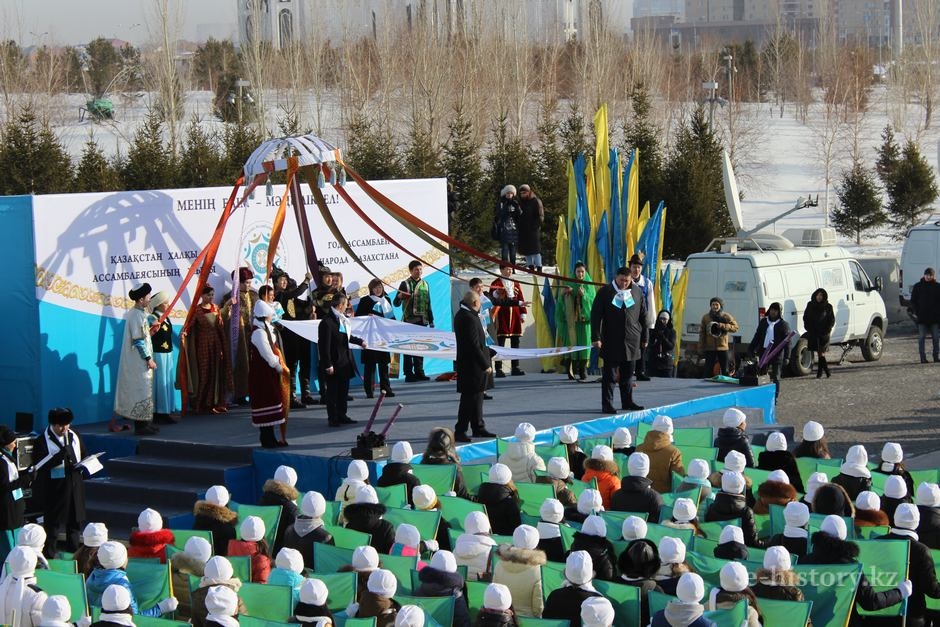 On February 6, 2015 the city of Astana hosted the opening ceremony dedicated to the Year of the Assembly of People of Kazakhstan. Public figures, representatives of ethnic and cultural associations, Olympic champions and young activists came together in front of the Palace of Peace and Harmony (Pyramid). All of them were awaiting the official ceremony of hoisting the flag of the Assembly.

A flash mob named "Zhastar kogamdyk kelisimdi koldaydy" ("Youth supports social cohesion") was organised on the square in front of the Palace. The event was attended by approximately 500 young people — representatives of various nationalities and ethnicities. It became a symbol of friendship between peoples living in the territory of our country. 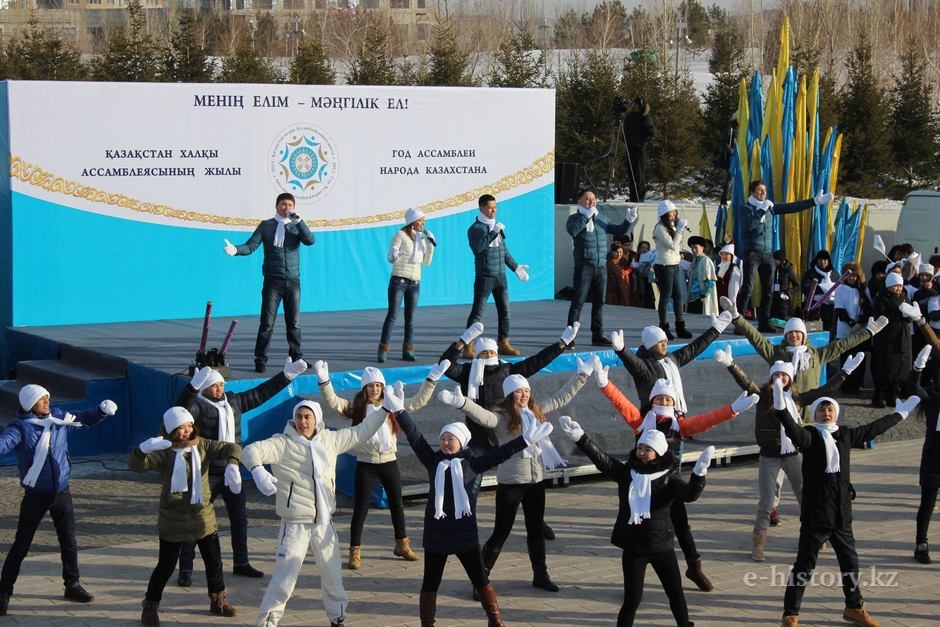 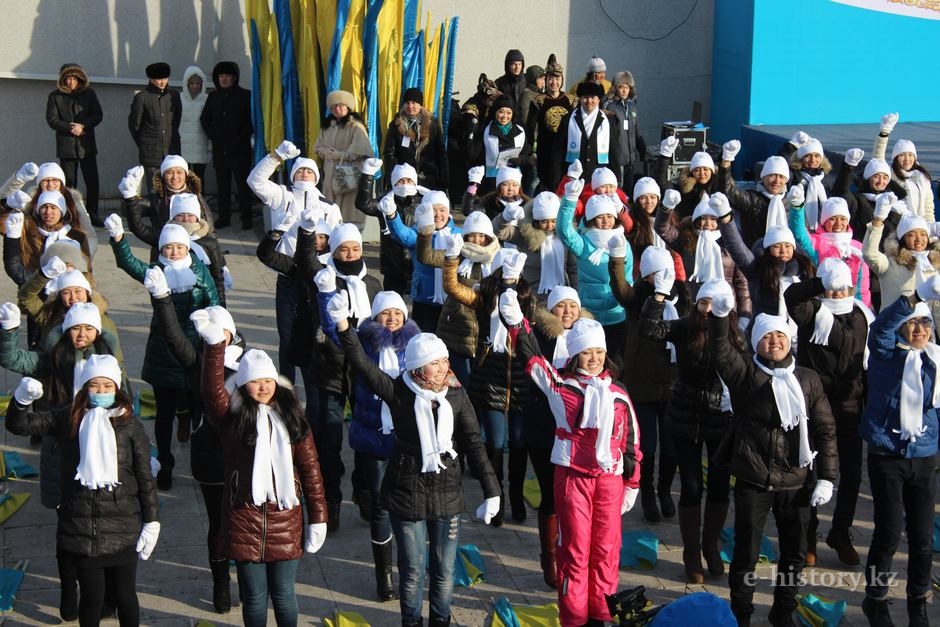 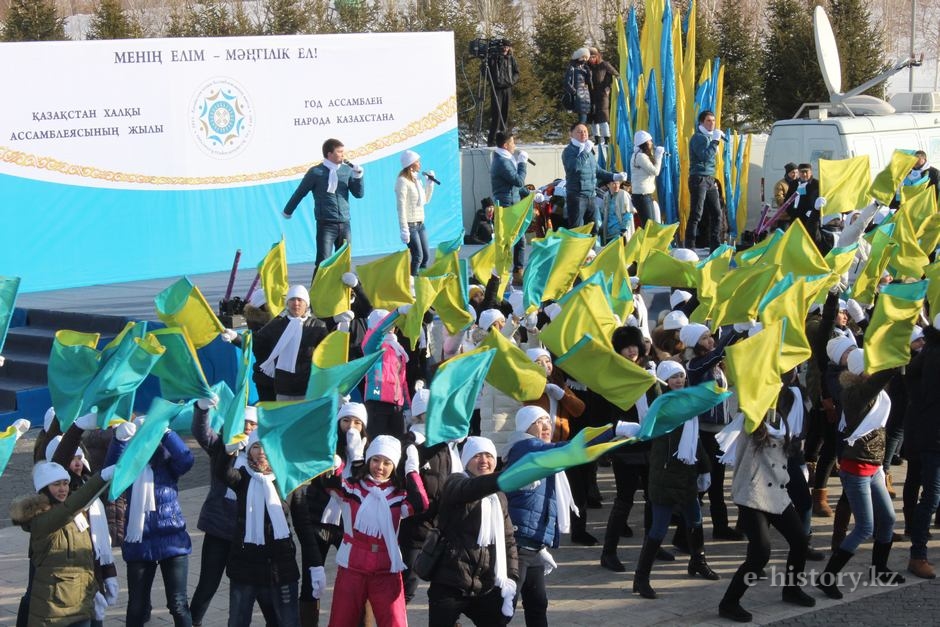 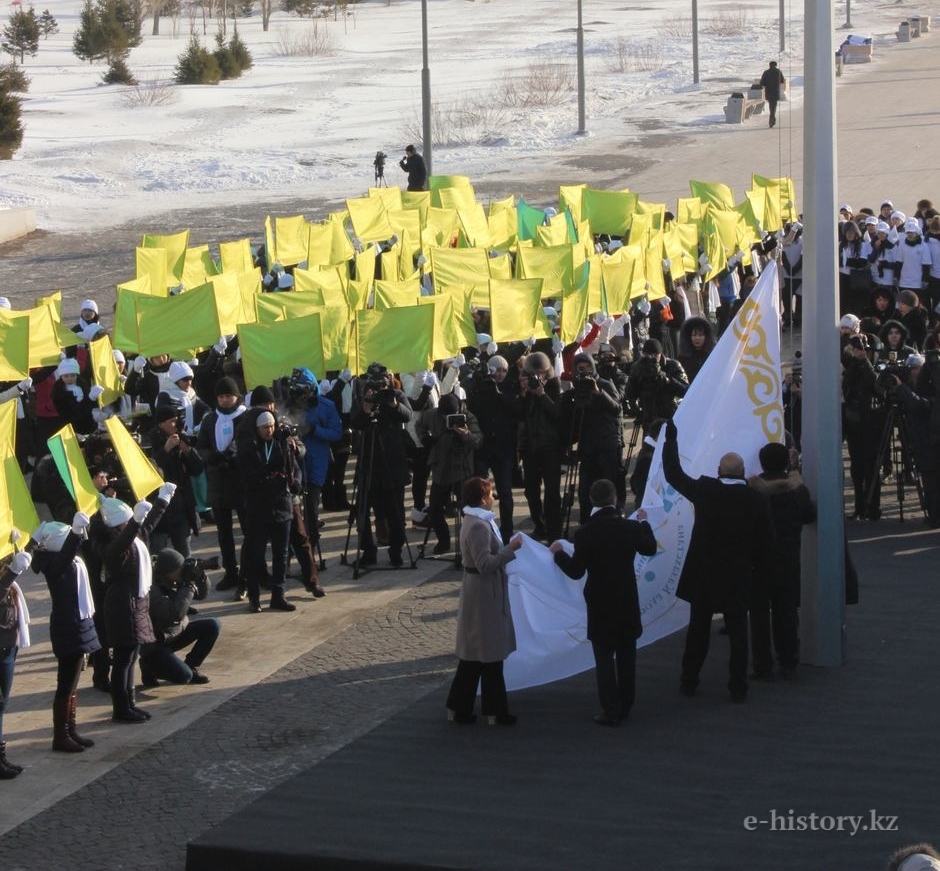 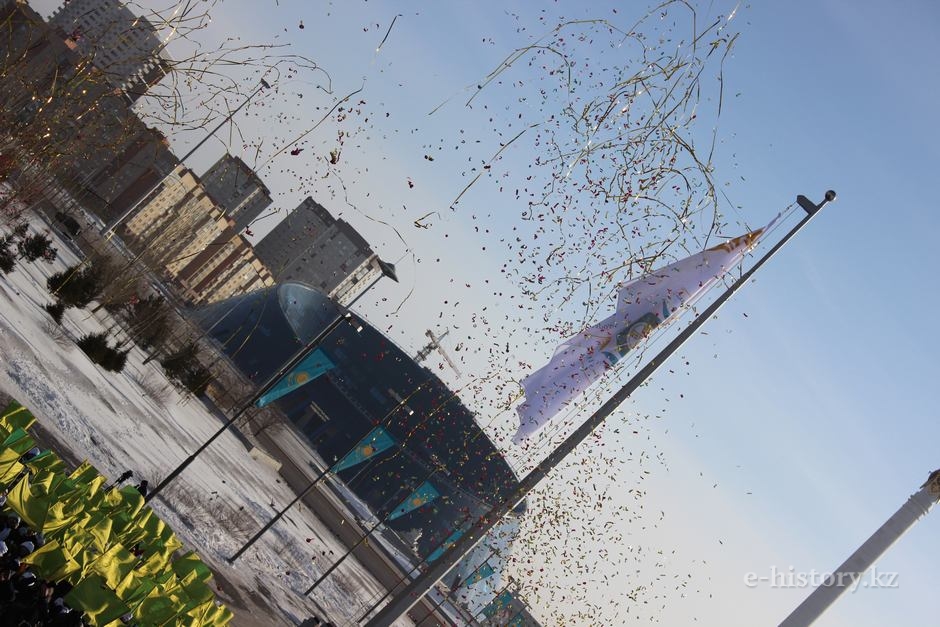 After the ceremony of hoisting the flag guests were invited to come in the Palace to visit an exhibition — trade fair of craftsmen and masters of traditional creative activities named "Khalyk murasy" ("National Heritage"). The exhibition gave an opportunity to present the products of craftsmen from ethnic and cultural centres.

The small exhibition was attended by craftsmen from many regions of the Republic of Kazakhstan. 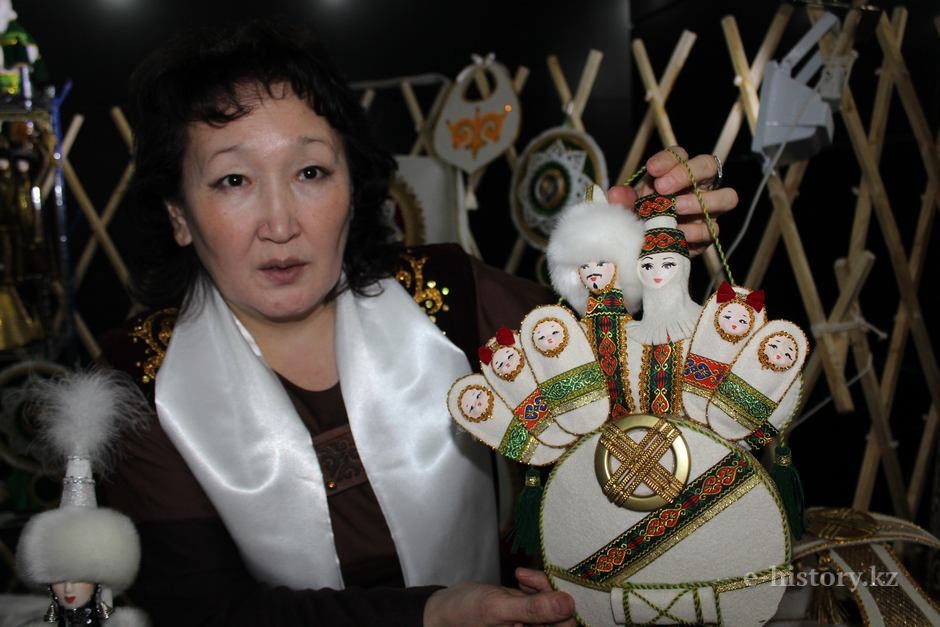 Kuangalieva Aynagul is a craftswoman producing national souvenirs. She is from Astana.

"Mainly, I work on producing dolls wearing Kazakh national costumes. I have been doing this work for twenty years. I am focused on Kazakh traditions. This, for example, is a family protective amulet. It is aimed at protection from quarrels and guarantees that relatives will be together under the one shanyrak (roof). 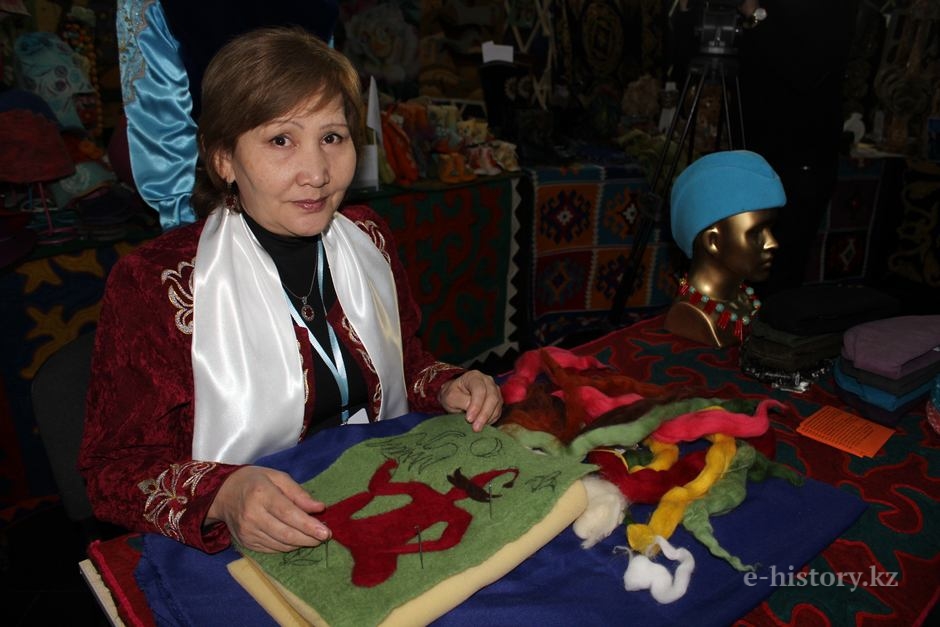 Bopanova Raushan is a craftswoman who works on producing items made of felt (the city of Shymkent). 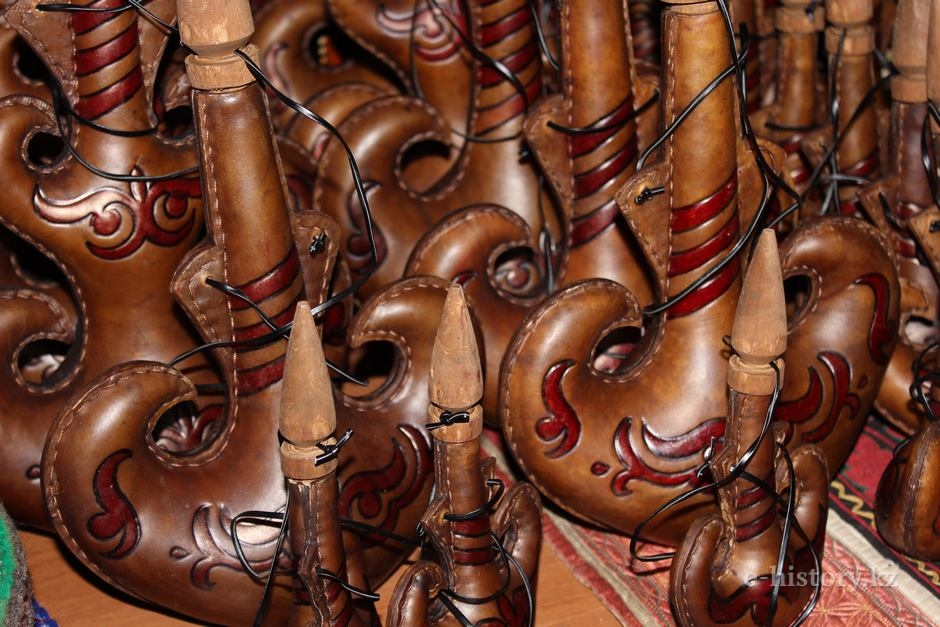 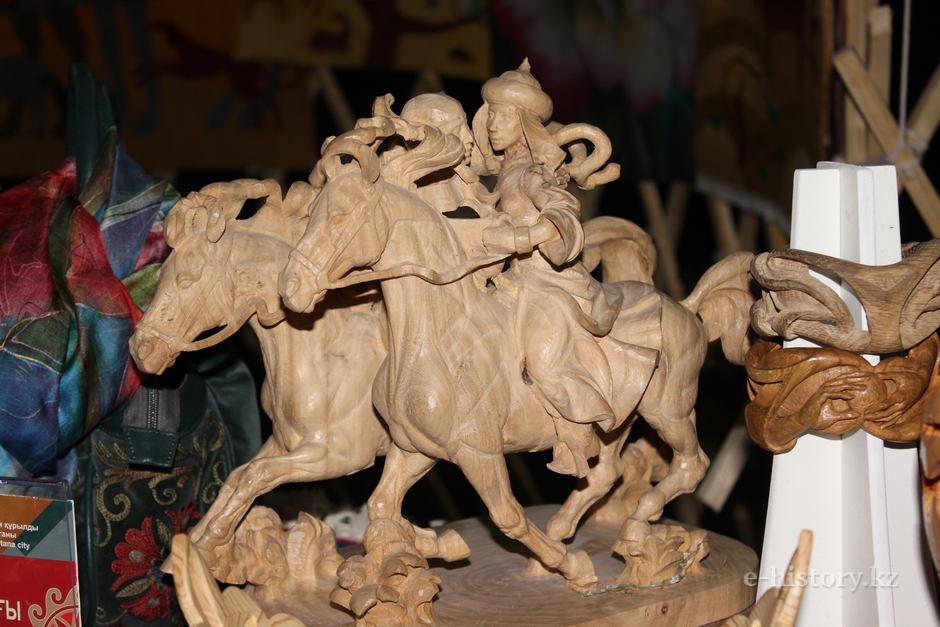 The synchronous event named "Start of the Year of the Assembly of People of Kazakhstan" was held simultaneously in all regions of the Republic of Kazakhstan.

Use of materials for publication, commercial use, or distribution requires written or oral permission from the Board of Editors or the author. Hyperlink to Qazaqstan tarihy portal is necessary. All rights reserved by the Law RK “On author’s rights and related rights”. To request authorization email to mail@e-history.kz or call to 8 (7172) 57 60 13 (in - 1163)
Қазақша Русский English
MOST READ
Month Year
Burial mounds of the southwestern part of the Semirechye region
Union of the Archives and Library
The referendum on the Constitution is a significant stage of democratization
Heroic mothers of the great steppe
Philosophy of the Emblem
14 monuments at Tekturmas
The rural akims: the country's hope is in the elections
Kazakh historical drama Tomiris premiered in Istanbul
Stolypin about the worries and hopes of immigrants to the Kazakh steppes
ALASH IDEA IS THE PROTECTION OF KAZAKH STATEHOOD
A tireless explorer of the Kazakh land
SWITCHING TO THE LATIN ALPHABET – UNITE ALL KAZAKH PEOPLE
Kunaev Dinmukhamed Akhmedovich
People who eat horses will kill you
Kazakhstan's participation in the Winter Olympics has a long history
Materials on theme
The intellectual lawyer
The memorial plaque of the popular writer K. Myrzaliev was installed in Almaty
The story of one photo. Rashit Zhumartov
Kazakh state remained thanks to Ulytau