Home News Other Documents appeared after death of Abylay khan 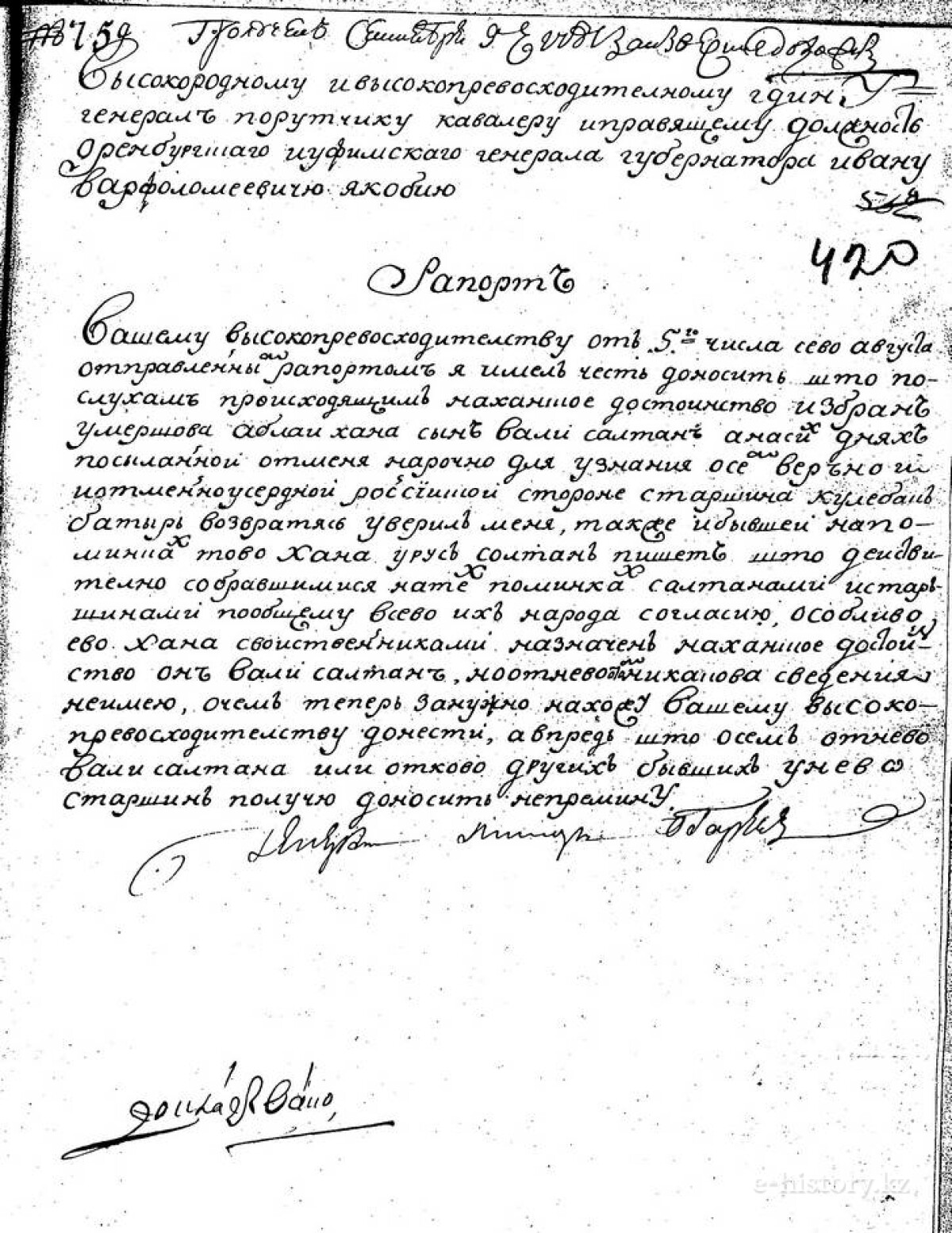 It is known that the Kazakh khanate was formed in 1465. At the beginning the young state had the small territory and population was only 200 thousand people.

Later its area increased and population reached nearly one million. Over time the political weight of the Kazakh khanate also became more complicated. Nevertheless the race for power and mutual hostility which began at the time of Genghis Khan had been continued.

Unfortunately, history did not save any documents related to time of creation of the Kazakh khanate. Historical science has very few facts, which could serve as a support for a reconstruction of the broad picture of formation of the Kazakh statehood, except Muhammad Haidar Dulati’s work.

On another hand, there are plenty of documents and descriptions, the evidence of historical process related to history of joining of the Kazakh steppe to the Russian Empire.

Here is one of such documents found in archives of the city of Omsk. This letter directed to the general governor of Orenburg I. Yakobi in 1781 after death of the Abylay khan. In the document written that after death of the khan his son Uali sat on the throne. 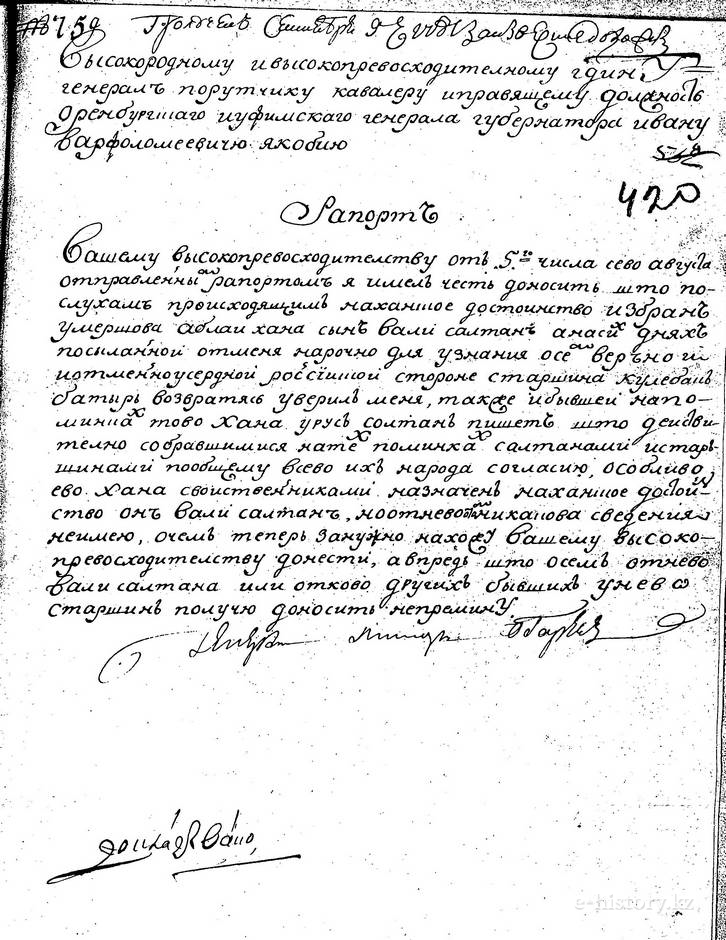 Chuchalov, the Russian ambassador, wrote about Uali khan: "As well as his father Ablay, Uali is self-confident, holds the ground, strong-willed and persistent. He accepted me only once, by doing so he told: "my father also met envoys from Russia only once" (The Kazakh-Russian relations in 18th- 19th centuries, 1964, p. 106) 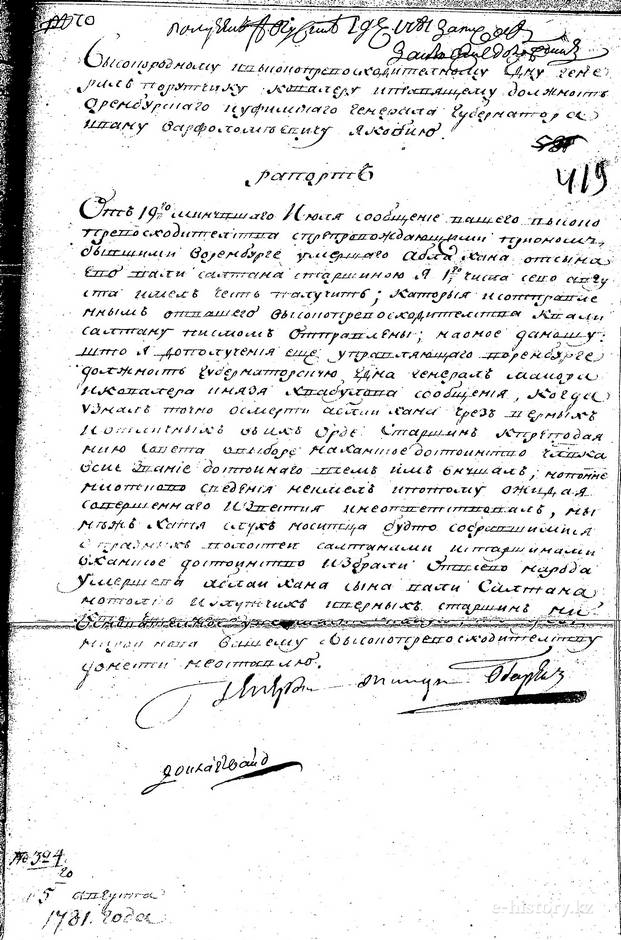 On February 25, 1782 Catherine II signed the diploma according to which Uali was assigned the khan of the Middle juz. On November 2 of the same year the Uali’s enthronement ceremony and swearing an oath of allegiance was held in fortresses Petropavlovsk with the assistance of the Siberian governor general Yakobi.

Uali khan tried to prevent the ambiguous policy of the Russian Empire which was carried with the Kazakh khanate. There are facts which witnesses that Russian governors secretly supported complaint about khan among the people, fueling this process by money from time to time. 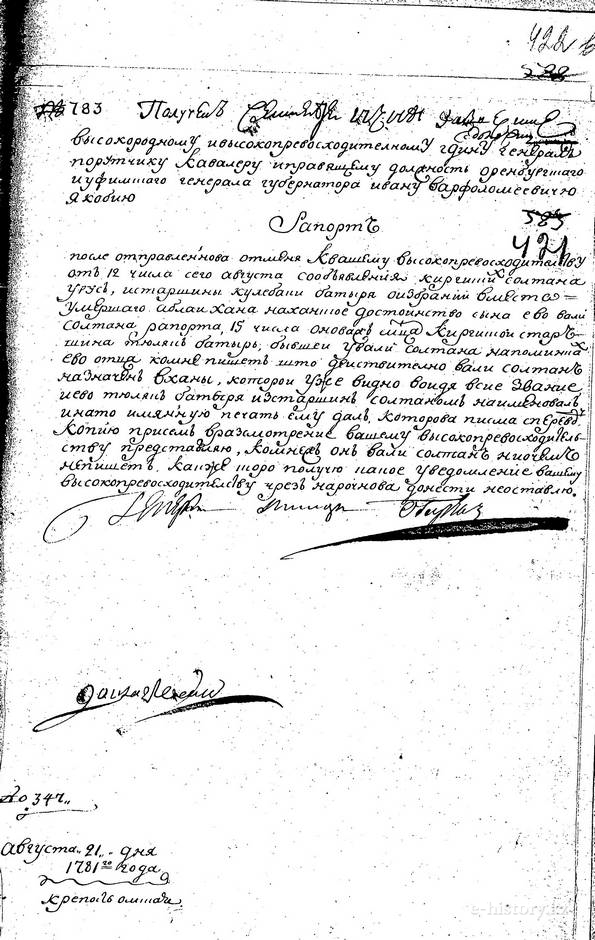 Thus, big purposeful work on separation of Middle and Junior juz, on cooling their kindred, friendly and political connections was carried out. In 1781, Uali khan showed his dissatisfaction concerning the capture of Nuraly the khan of Junior juz and sultan Ayshuak. The governor general of Orenburg baron O. Igelstrom replied on the khan’s complaint as follows: "A senior khan, Her Imperial Highness the Empress gave in your power only Middle juz, and business of the Junior juz is not entrusted on you" (Materials on the history of Kazakh SSR, 4th vol., 1940, p.102)

Uali was the khan of the Middle juz for 37 years. He died in 1819. The imperial power supporting a policy "Divide and rule", in 1815 assigned another khan of Middle juz, thereby making internal political dissonance. Bokey, the son of sultan Barack, who killed Abulkhair, became the khan. This fact was an incitement for opening of new pages of history.

Internet-project "History of Kazakhstan" expresses gratitude to the State archive of the city of Astana for the provision of historical documents.