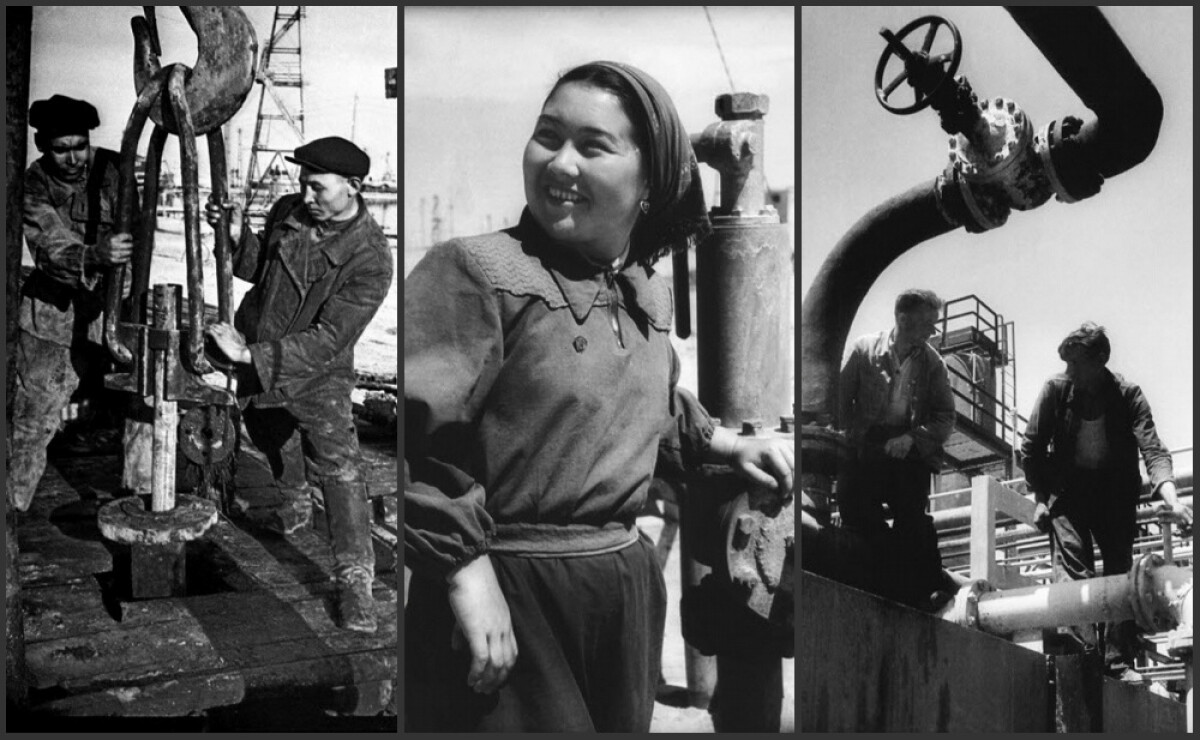 Industry - the leading branch of a national economy of Kazakhstan. It gives nearly a half of a public product of the republic.

Industry of Kazakhstan during the post-war period

In the post-war period our republic having diversified industry started reconversion of the national economy and the significant increase of civil production. Kazakhstan became one of bases in recovery of victims of war of regions where from the republic were exported metal, raw material resources, fuel, construction materials, industrial goods and food, breeding cattle and seeds. The industrial enterprises, continuous time working for needs of the front switched to release of peace productions. There was a reorganization of technological processes, equipment checkout, major repair of machines and range of industrial plants. New forms of production communications between the enterprises were set. Many of them transferred to new specialization or returned to the former. 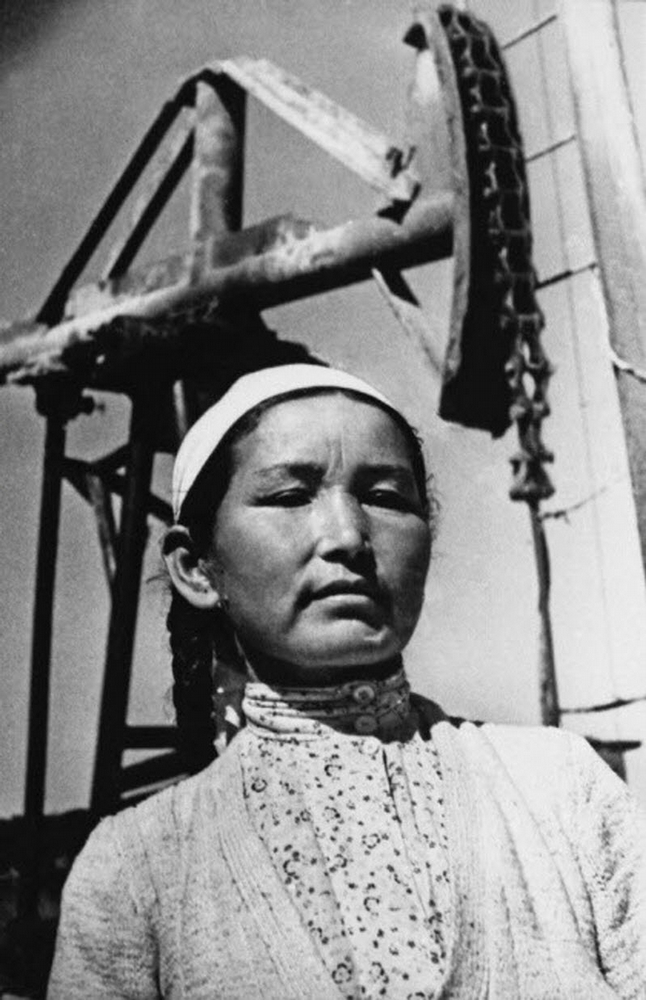 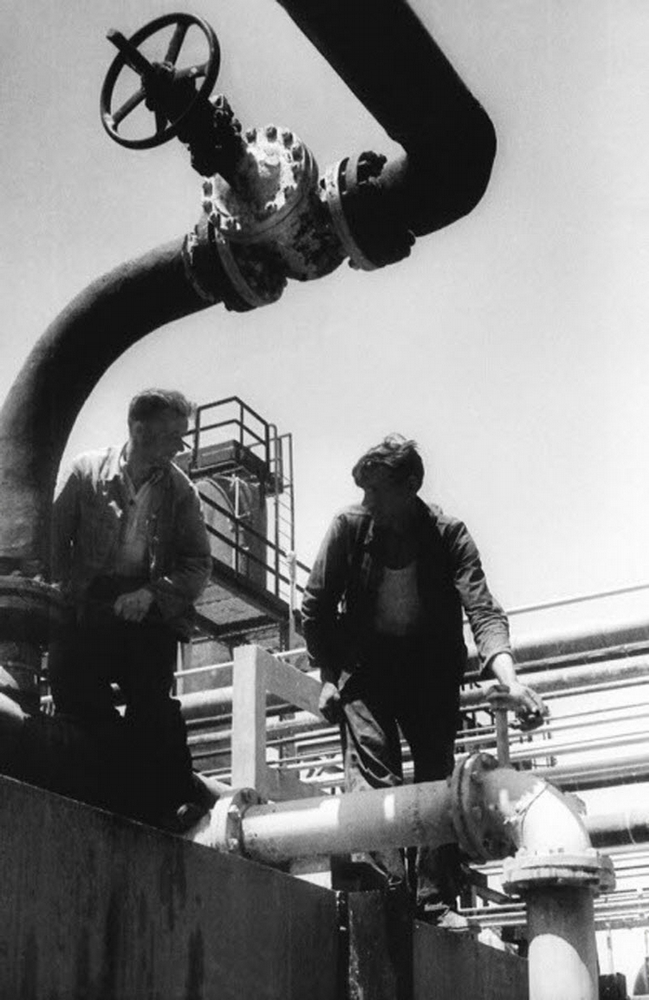 The enterprises of the heavy industry were built. Six new coal mines, crafts Karaton and Munayla became operational and construction of the Kazakh steel plant finished. Capacity of the Aktyubinsk plant of ferroalloys has been increased, the first stage of Karatausky mining and chemical combine entered a system. The power engineering on local fuel developed. Power generation in 1950 reached 2, 6 billion kWh against 0, 6 in 1940.

Branches of the light and food industry gained further development. The range of consumer goods, production of food extended, their quality improved. Capital investments in the food industry for 20% exceeded the volume of the means mastered for two pre-warfive-year periods, and its gross output increased for 60% and the pre-war level of production of main types of foodstuff was considerably exceeded.

Major industrial construction, particularly branches of mining industry due to the character of the economy which is oriented to production of raw materials, was conduction in Kazakhstan in 60’s. Existence and development of primary branches of the industry were supported not by intensification of production, but mainly by the expense of increase in capital investments and input of new capacities. Nevertheless, in basis, especially in raw branches of the republic of stagnation was not observed. Only for 1961 — 1965 in a national economy of the republic it was mastered capital investments more than for all previous years of the Soviet power thanks to what the industrial capacity of the republic doubled. 729 large industrial enterprises and 535 shops became operational. In the second half of the 60’s were put into operation 445 more large enterprises and shops, hundreds of plants and factories are reconstructed and technically upgraded.

According to the increasing involvement of the republic in all-union division of labor gained the accelerated development ferrous and nonferrous metallurgy, oil and gas, chemical and petrochemical, there was a row of new industries on production of titanium, magnesium, alumina, cast iron, coke, synthetic rubber, cranes, electro-motors, new drawing camps and forge and press machines, asbestos, etc. 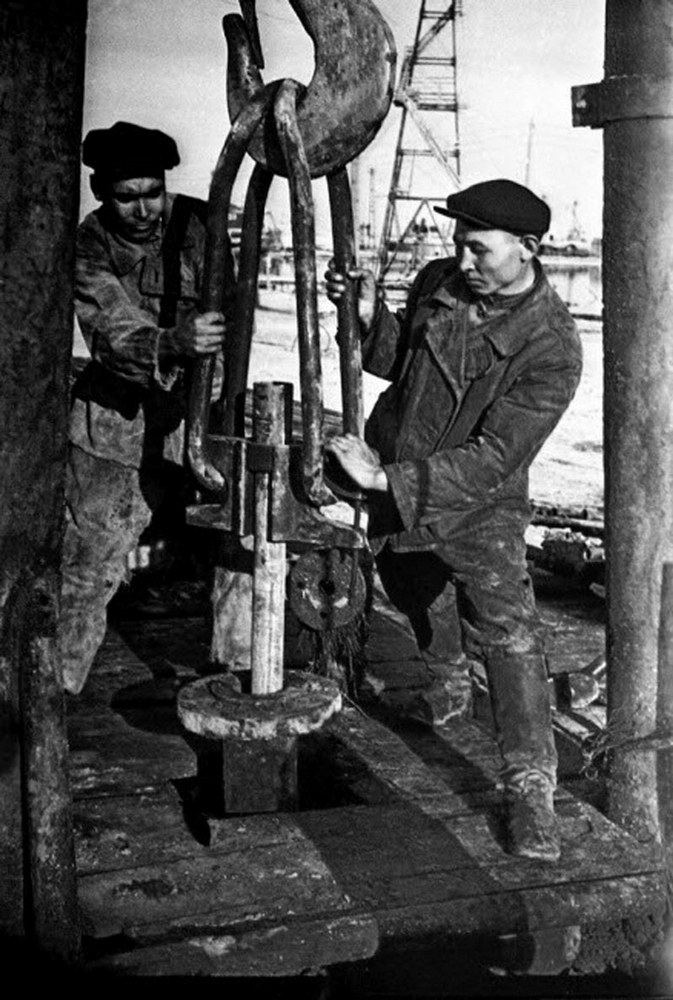 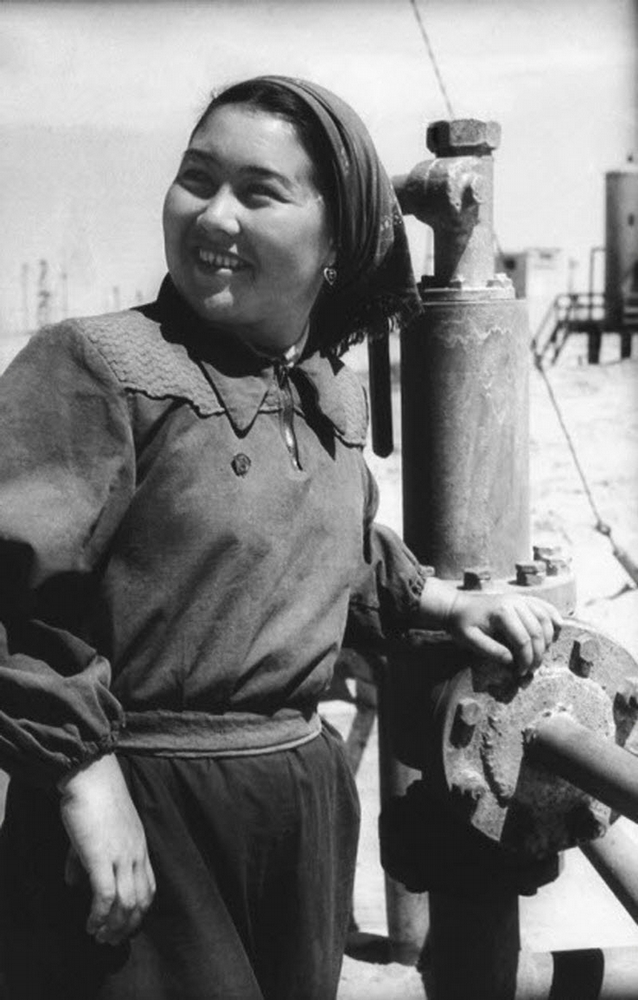 In 1963 the second stage of the Aktyubinsk plant of chromic connections that allowed increasing production almost by 3 times became operational. Workers and specialists of the Karaganda plant in a short space of time mastered the power of shop of synthetic rubber. The first shops of the Guryev chemical plant became operational. In 1959 in Chimkent the hydrolytic plant started working. In 1963 the Chimkent tire-repairing plant began its work and the same plants were built in Tselinograd, Kostanay, Karaganda and Pavlodar.

In the 60’s broad development was gained by cooperation of the enterprises of chemical industry with other branches, in particular with metallurgical. In 1963, workshops in Balkhash mining-metallurgical combine and Chimkent lead plant produced sulfuric acid. Coke-chemical production gained development at the Karaganda steel plant. All this considerably strengthened the base of big chemistry in Kazakhstan. In 1970, Kazakhstan produced the largest part of yellow phosphorus, 40% of chromium salts, 20% of polyethylene of low pressure and over 10% of sulfuric acid in the country.

Successfully the power industry developed in the republic. In 1961 — 1965 such powerful power stations as the Karaganda GRES-2 (power of 600 thousand kW), the Peter and Paul combined heat and power plant (250 thousand kW), Almaty GRES-2 (200 thousand kW), Bukhtarminsky hydroelectric power station (600 thousand kW), etc. were constructed and put in operation. In the second half of the 60th electricity generation increased by 1,9 times, release of heat increased twice. In 1970 34,6 billion kWh of the electric power that equals to nearly four plans of GOELRO were worked out. Since the beginning of a five-year period 90 thousand km of power supply networks, and 85 thousand from them — for agriculture was constructed. The level of the centralized electrical power supply of objects increased two times, nearly 76%.

Coal industry gained considerable development. For 1959 — 1965 in the republic was introduced production capacities on 19,5 million tons. Production of the coked coals increased by 68%, its volume made 11044 thousand in 1965. Open production continuously extended. Since 1954 began to be developed unique on power of carbon layer of the Ekibastuz field. In 1965 production volume in the pool made 14,3 million tons of coal. By 1970 on the Karaganda and Ekibastuz pools coal mining reached 61 million tons a year, from them 41% were extracted by the most progressive and open method. 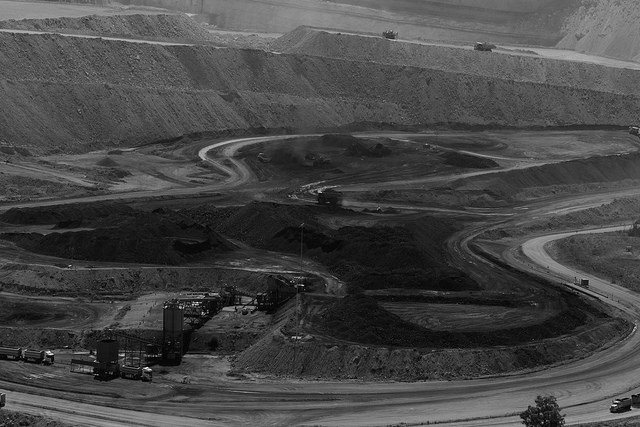 Ferrous metallurgy became one of the leading and perspective industries of Kazakhstan. The Sokolovsko-Sarbayskymining-processing plant that created a reliable source of raw materials for steel works of the Urals and other enterprises of the country started their work. 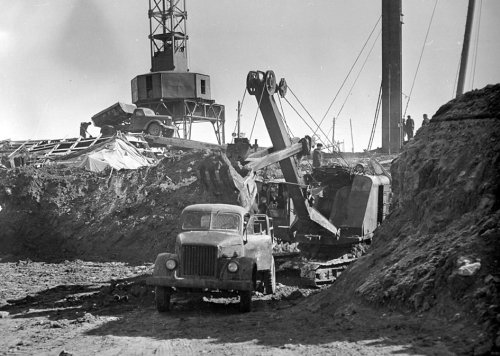 Further development was gained by nonferrous metallurgy. The Tishinsky mine and zinc plant on Leninogorsk polymetallic combine, the mines No. 55, largest in the country, and No. 57 of the Dzhezkazgan mining and metallurgical combine were put into operation; the complex of aluminous production of Pavlodar Alumina Plant and the Ust-KamenogorskTitanium-magnesium works quitted on original design capacities. Production capacities Ust-Kamenogorskzinc-lead and Balkhash mining and metallurgical combines were expanded.

The oil-extracting industry also had been developed with accelerate rates. Thanks to introduction to maintenance of fields Korsak, Tanatar, the Abyss level of production of oil in 1965 made 3 million tons. Further development of branch was connected to the peninsula of Mangyshlak which became one of large oil regions of the Soviet Union; in 1970 oil production exceeded 10 million tons. The complex technical and transport challenges connected to production and transportation of high-paraffinic Mangyshlak oil of implementation of progressive methods of maintenance of fields, sharp increase in a gushing method of oil production were successfully solved. 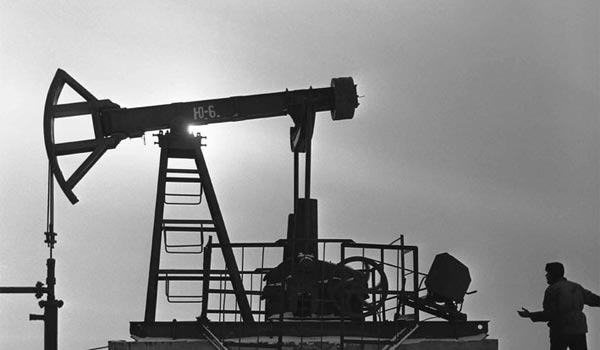 Existence of the richest natural resources put forward Kazakhstan on one of the leading places in the country on development of chemical industry, especially mineral fertilizers. By the end of a «semiletki» (seven years plan) the "Karatau" combine became the supplier of phosphorus-containing raw materials, largest in the country, where four superphosphate plants worked: one — in Kazakhstan, remaining in the republics of Central Asia.

Design capacity of superphosphate workshop was completely mastered at the Dzhambul superphosphate plant and the workshop of ammorphos started working. The South of Kazakhstan in the shortest possible time turned into the largest basis of the country on production of yellow phosphorus and the complex high-concentrated fertilizers.

Creation of the North Kazakhstan integrated power system was the principal results of works of power engineering specialists.

The mechanical engineering of Kazakhstan specialized on service of such leading branches of a national economy of the republic, as agriculture, ore mining, chemical and oil industry. The tractor plant which became a basis of tractor construction of the republic became operational.

Specialized sections on release of parts to agricultural machines started to work at "Kazakhselmash" plant and the equipment providing mechanization of works in field husbandry and animal husbandry was mastered. 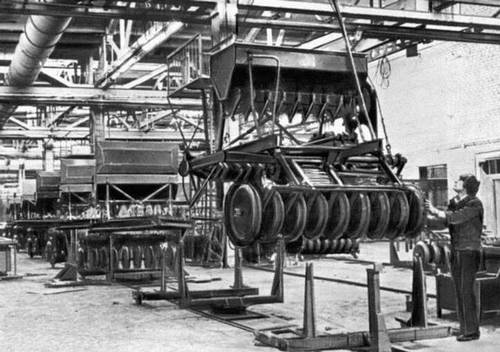 At the same time the mechanical engineering in the republic developed insufficient rates, its specific weight increased in the total amount of industrial production with only 10,4% in 1961 to 10,6% in 1970 Kazakhstan made machine-building production of very limited nomenclature and in the volume insufficient for a covering of needs of the republic. In the 60’s need of the republic for machines, instruments and an equipment for 72% was satisfied due to import from other republics, import of production of mechanical engineering exceeded export by 8,5 times. In the republic there were no the enterprises making highly profitable end products — instruments, cars, electro-technical products, machines and the equipment.

Since the beginning of the 60’s the increased volumes of capital construction demanded creation of basis of the construction industry. Formation and development of production of the national teams of steel concrete constructions and details and the cement industry became a basis to go to construction by high-speed industrial methods. If in 1955 in the republic there were only two low-capacity cement plants with annual production of cement of 365 thousand tons, then in 1965 there were five plants — Karaganda, Aktyubinsk, Semipalatinsk, Ust-Kamenogorsk and Chimkent worked. Production of cement made 4037 thousand tons or in 11 times more, than ten years ago.

But in development of capital construction there were several problems caused by domination of command management of the system economy. Disproportions between large and limited volume means were the principal disadvantage of capital construction. There were numerous facts of low-quality execution by the project organizations of working drawings. Construction developed on an extensive basis, periods of a construction of objects and the enterprises exceeded standards, the volume of incomplete construction increased from year to year.