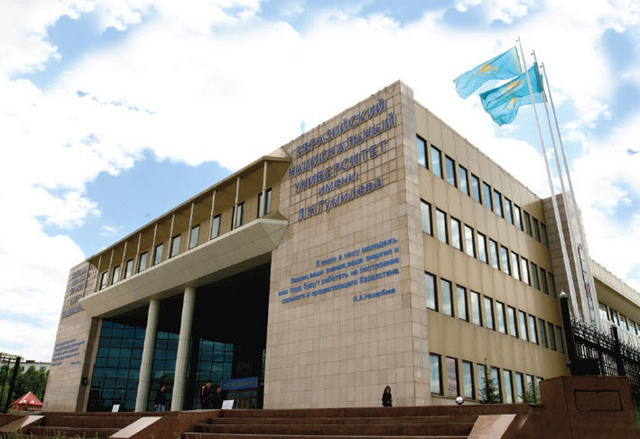 On 30 October 2014 scientists from the Institute of State History, Ministry of Education and Science of the Republic of Kazakhstan and the Eurasian National University held a round-table discussion.

Issues raised by the President N. Nazarbayev in his interview in Ulytau related to the history of Kazakh nation continue finding responses within scientific and pedagogical community and give impetus to further discussion of key challenges in studying and teaching national history in our institutions of education.

At the meeting historians reviewed the main tasks of historical science in Kazakhstan and studying in educational institutions in the light of the Mangilik Yel concept proposed by the President of the Republic of Kazakhstan N. A. Nazarbayev.

The event was attended by the Minister of Education and Science of the Republic of Kazakhstan A. B. Sarinzhipov. The Director of the Institute of State History, Doctor of Historical Sciences, Professor B. G. Ayagan moderated the discussion. Members of the Parliament, representatives of the Ministry of Education and Science, statesmen and public figures, historians, philosophers and political scientists, linguists and school teachers also participated in the round-table.

Participants discussed problems of the main focuses in teaching such fundamental subject forming historical self-consciousness of the nation as the History of Kazakhstan in schools and institutions of higher education, textbooks and training manuals quality as well as methodological and scientific accompaniment of the subject.

Briefing for Editorial Board of the Mangilik Yel journal was held before the round-table by Member of the Majilis (lower house) of the Parliament of the Republic of Kazakhstan, Member of the Social and Cultural Development Committee, Doctor of Political Sciences, Professor K. N. Burkhanov. In his interview Burkhanov noted that such subject as History is aimed at shaping the world view and patriotism of young people. Centuries-old history of Kazakh nation has many brilliant and heroic pages worthy of inclusion into history textbooks. Different ages and epochs of Kazakh history are parts of common national history.

According to the speech of K. N. Burkhanov the Mangilik Yel concept proposed by the President of the Republic of Kazakhstan N. A. Nazarbayev is a basis of historical philosophy and state ideology. Being a professional historian and politician he highlighted that it is important to start studying history with basic part of historical knowledge — philosophy of history, its theory and methodology, as these are root and trunk of historical tree. Canonical national history can be based on them. According to the reporter, History of Kazakhstan, as a school subject, is a history of nation and state with Kazakh statehood as a core. He talked about the role of history in formation of national identity and statesmanship.

He also mentioned the need for objective interpretation of such concealed in the Soviet history topics as the Soviet-Finnish War, shooting of Polish officers in Katyn, Soviet occupation of Baltic States and parts of Romania and Poland.

In his speech the author raised problems of historical periodization and respect for various scientific points of view and opinions.

His colleague, Members of the Majilis, Doctor of Historical Sciences, Professor Lieutenant General A. B. Tasbulatov focused on nurturing patriotism among young generation on the basis of detailed studying history of the country and native region. Without small homeland and knowing deeds of glorious batyrs-ancestors of different regions of Kazakhstan there is no great homeland.