Home News “I did not pay attention to time and health…”

“I did not pay attention to time and health…” 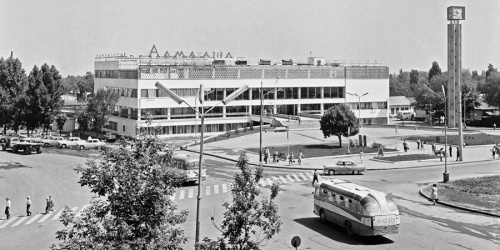 Leonid Zhukov 8 years worked as the minister of the motor transport of KazSSR.

From September, 1954 to August, 1956 — the minister of the motor transport and highways Kazakh the Soviet Socialist Republic;

In 1975 — the winner of the State award of the USSR in the field of science and technique for creation of the mountain sport complex Medeo. In 1974 he was given the title of «The honored worker of transport of Kazakh SSR». 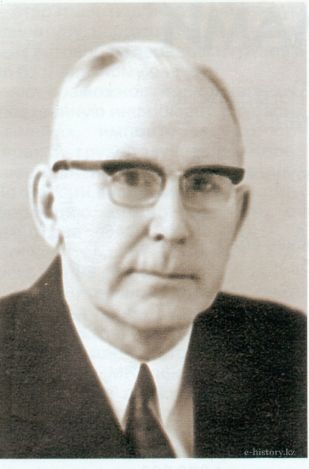 It was rare to maintain in a ministerial position for 8 years. This period was significant to development of virgin and arable lands, construction of new industrial enterprises and their expansion. The motor transport had been developed with accelerated speed. Only in the Virgin lands region about 200 motor transport services were created. During the two years in 1954 and 1955, Kazakhstan received more than 22 thousand trucks. More than 21 thousand drivers from Russia, Ukraine, Baltic and other republics came to the region. If in 1953 in Kazakhstan were only 35 motor transport services of public use, then in 1960 they became more almost in 10 times. Workers of transportation gave huge support and help to grain-growers in construction of new state farms and grain-growers in construction of new state farms and station for grain receiving, also roads to them. From 1954 to 1960 they transported more than 3 billion poods (Russian pound) of virgin grain and on the volume of transportations took the leading place in the republic.

The progress did not come immediately. Due to a serious disproportion in development of the industry and agriculture in March, 1953, the general reorganization of the ministries that concerned both allied and republican governing bodies of transport was carried out.

He was born in June, 1914, in the family of the railway employee — the telegraphist. His father Georgy nearly 20 years worked as replaceable telegraphist on the Millerov station of the Southern Donetsk railroad. His mother Vera was a housewife. At the time when he was studying at school, Leonid «added» to his certificate two years thanks to what was able to finish four-month courses of tractor operators.

Work at such responsible positions required not only experience but also additional theoretical preparation. Thus, in 1950 he went to Moscow, where graduated year advanced training courses of the leading party and Soviet workers at the High party school in the Central Committee of All-Union Communist Party (Bolsheviks). Leonid wrote in his book [1]: «Among special disciplines, the most memorable was the course concerning specific economy, which includes study of balance and methods of its analysis that was useful later during the work of minister.

In July, 1953 Leonid Zhukov was assigned by the minister of road and transport economy Kazakh the Soviet Socialist Republic. In the characteristic made in case of the statement as the minister it was marked that «… comrade Zhukov well knows operation of the railway and motor transport, communication and the frames of these branches of a national economy disciplined exacting to him and to the subordinates, is basic, shows an initiative directed by questions of transport and communication».

The status of all organizations on the basis of which the new ministry was created, was well familiar to Leonid. It was the low-power economic systems which had extremely poor technical equipment. Motor transport services of the ministry remained small-sized with vehicle fleet. Usually

Motor transport services of the ministry remained small-sized with vehicle fleet, usually within 50 cars and 100 cars in regional centers, including 2 buses and only in Alma-Ata there were about 8–10 buses. Further development and rise of these enterprises first of all required their technical re-equipment and training of specialists.

All motor transport services of Kazakhstan faced with this problem. The vehicle fleet of the republic increased every year while the repair and preventative basis in essence did not develop. According to L. Zhukov «it generated simple and amateur work in repair and maintenance of machines and led in their premature wear». The ministry had to stimulate to repair passenger cars at the Moscow plants, spending large sums for their transportation. Karaganda car repair plant repaired only the cargo cars ZIS-5, its power was expected 500 overhauls, readiness of Almaty car repair plant, which is under construction, made only 19%.

In October 17, 1953 the Ministry was again renamed into the Ministry of the motor transport and highways of Kazakh SSR. In one of the first reports in the Central Committee of the Communist Party of Kazakhstan Zhukov complains about the small funds allocated for house building, so necessary for fixing of frames. He asks to include in the investment plan on 1954 «a 44-apartment house in case of Almaty car repair plant, houses in case of motor depots, houses in case of the Ministry of Road Construction, the hostel in case of Semipalatinsk road mechanical and technical school».

After reviewing of this document the higher government telegram with a request for increase in capital investments for 1954 «at least to 19 million rubles» was sent to Council of ministers of the USSR. Means were necessary both on construction of housing, and on creation of conditions on the maintenance of vehicle fleet. Except financial support, the Ministry of the motor transport and highways of USSR made the decision on the organization in Alma-Ata of construction and installation trust of allied subordination. Construction of car repair plants, garages, service stations of cars, petrol filling stations, houses, cultural and community objects and office buildings in Kazakhstan and the adjacent Average and Asian republics was laid to it.

In 1957, the ministry brought input of housing in maintenance to 150 thousand square meters of living space. Four room houses, hostels for youth, pioneer camp and hotel for drivers on distant routes, clubs and preschool institutions were built.

In 1956, when the virgin soil yielded the first surprised whole world the richest harvest and farms of the republic for the first time covered more than one billion poods of bread in granaries of the state, especially sharp growth of park of trucks began. The ministry at that time received 28 thousand new trucks therefore its vehicle fleet increased more than five times from plants. Following 1957 the cargo vehicle fleet of the ministry increased by 26 thousand cars, and in 1961 the ministry had about 80 thousand trucks, nearly four thousand buses and two and a half thousand automobile taxi. In comparison with 1953 the park of trucks increased by thirty times, buses more than in ten and automobile taxi seven times that demanded sharp extension of training of drivers and repair frames: to 30 thousand people a year.

When L. Zhukov headed the Ministry, 389 experts worked there, among them 47 people had the higher education, 16 — incomplete the higher, 197 had college education. Due to the lack of the higher and average automobile educational institutions the covering of need for these frames was provided at the expense of the central educational institutions (in 1953 at the Moscow road institute 8 Kazakhstan citizens were trained). However, due to the annual growth of vehicle fleet need for techniques permanently grew. In this regard Ministry of Road Transport brought up a question of need of the organization in Alma-Ata of automotive technical school.

E. Chilikova,
Chief specialist of Archive of the President of Kazakhstan

Materials on theme
Traditional life in the steppe: 8 facts you may not know about earrings
Trade fair of folk crafts “Silk Road”
The President congratulated the Writers’ Union of Kazakhstan on its 80th anniversary
Warrior or shamans were found Karakaba’s necropolis