Home News Other Warrior or shamans were found Karakaba’s necropolis 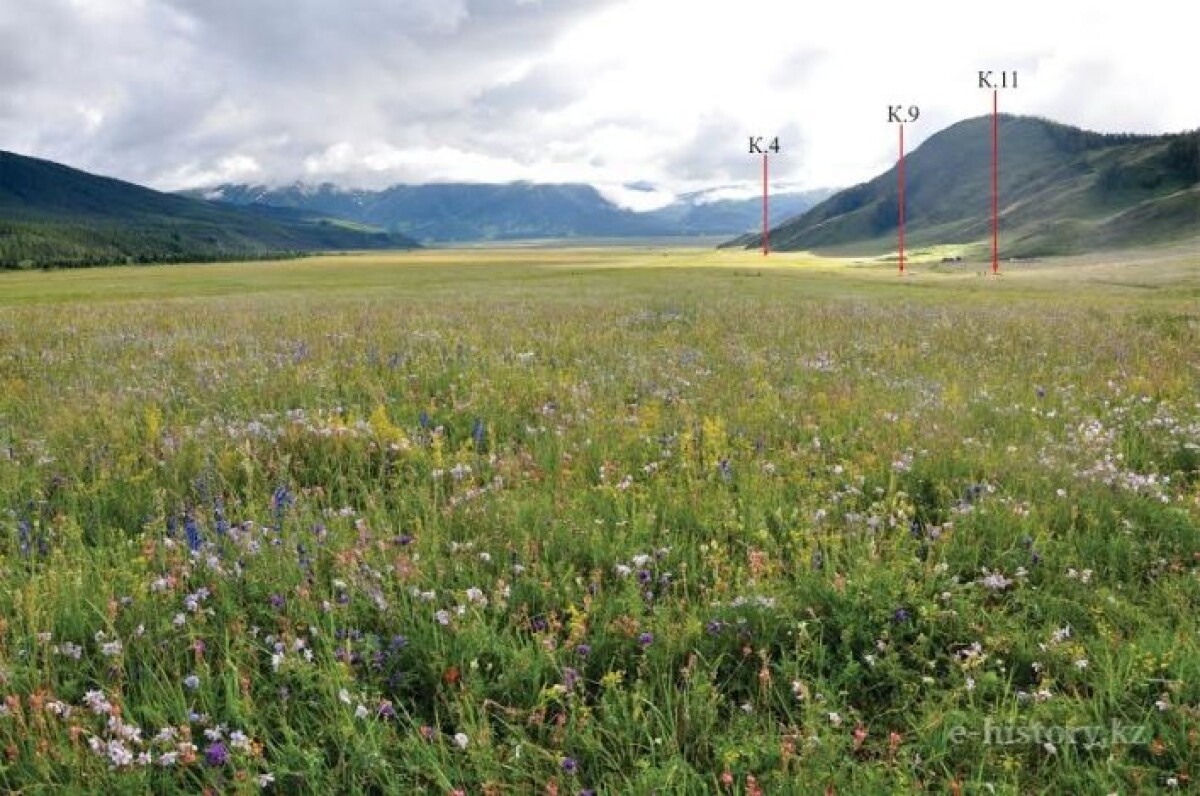 Third year at the necropolis Karakaba in the East Kazakhstan under the leadership of the famous archaeologist Zeynolla Samashev was conducted a research of burial mounds of the ancient Turkic time.

According to scientists, the founded burial mound belongs to 7th- 9th centuries, to be precise 8th century of our era. In three years archeologist carried out excavation of five barrows and all ancient funeral constructions are amounted hundred. All of them belong to closely related representatives of ancient Turkic ethnos.

Zeynolla Samashev, please tell us in more details about your amazing findings.

— First of all the architectural appearance of these funeral constructions is very interesting. For the first time we managed to find out some nuances of funeral ceremonialism and the device of designs. In particular, it is a sideway pit for hall, prompt of the hall, accompanying burial of a horse in the main and entrance of the pit. Having opened barrows, in a side hole we found buried people who laid the head to the east. The accompanying stock is of special interest. All these people — soldiers. Thus, the military attributes like saber, quiver, helmet and so on, are presented in burial completely. And what is the most surprising is that near these people were buried musical instruments. 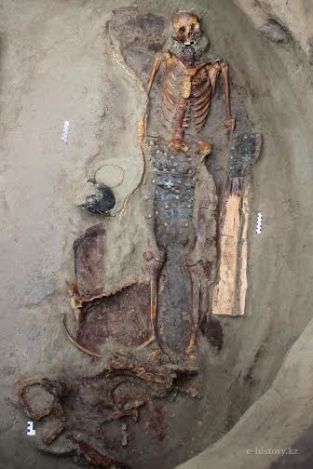 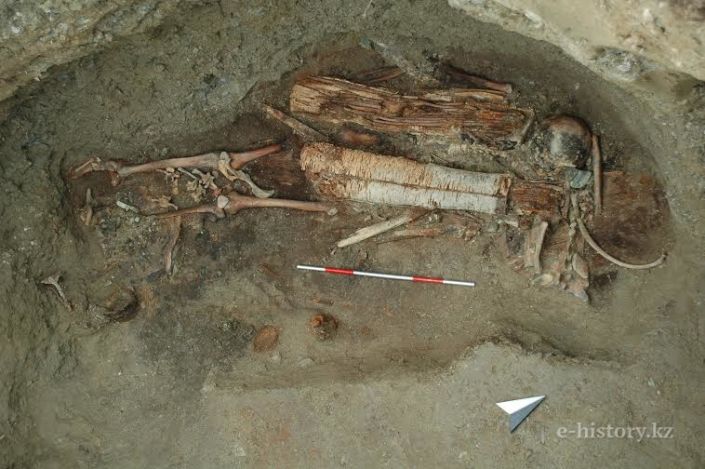 Certainly, musical instruments have been found earlier in the ancient Turkic burials, for example, on the territory of the Mongolian Altai and in Kipchak graves on the territory of modern Ukraine. However, in this case in the same cemetery were found just three musical instruments. One tool is similar to kobyz (ancient Kazakh string instrument), second one from the distance reminds dombra (musical sting instrument with long-necked lute) and third is multi-purpose tool, it is both a string and occlusive. Unfortunately, their condition is poor as they were made of wood. 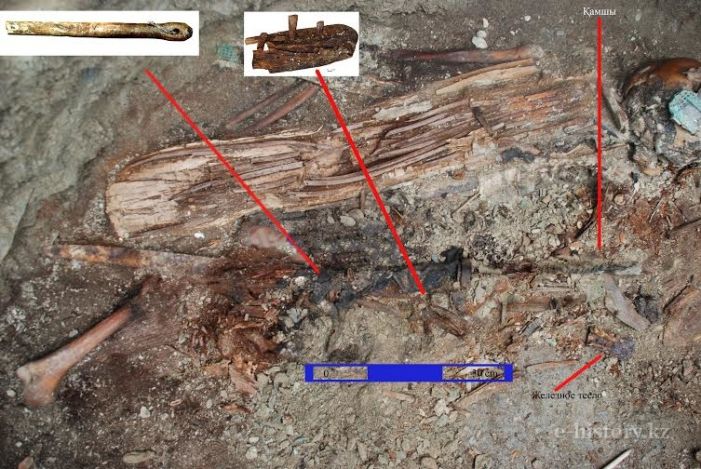 The remains of wooden musical instruments 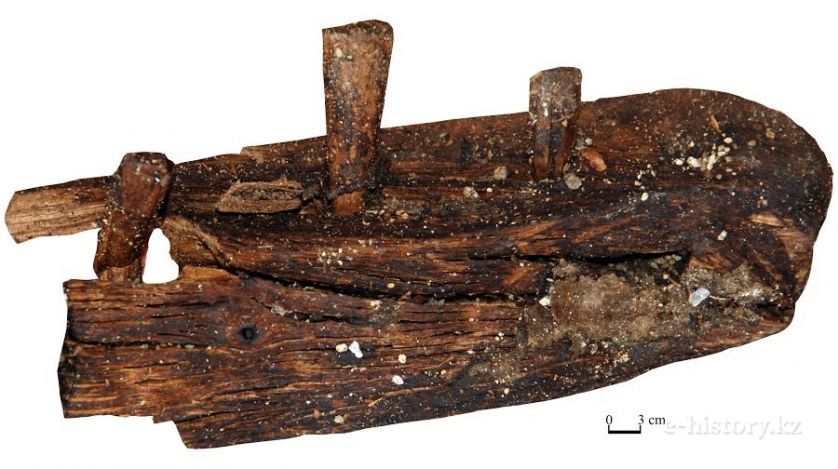 The headstock of a musical instrument from the necropolis Karakaba

Thus, besides military attributes, buried accompanied with musical instruments. It is unusual phenomenon, now we think and guess who these people were: soldiers? musicians? We have third assumption, perhaps, they were shamans.

Based on the logic, at this time all men were soldiers and at the same time, perhaps, the buried man was musically gifted person. This assumption is also admissible. However, the third version, the one which we all have incline, the found man is not just soldier musician, but also shaman and worshipper of a cult.

All burials are located nearby. Nevertheless, all of these people could not simultaneously be shamans, but, perhaps, possibly could. This assumption can be supported by the fact that all of them had traces of trepanation of the skull, which was made perfectly. It is mysterious, perfectly round and 3.5–4.5 cm in diameter. Presumably, these people lived for while after this operation.

This led us to believe that they were the chosen of the spirit, which is endowed with special qualities and abilities that could communicate with the spirits, the supreme deities. Thus, these holes were made to make this communication more efficient.

At present, we are waiting for the results of research of the remains made by neurosurgeons and we will see what they say. We passed four skulls to Neurosurgery Center in Astana. We also plan to conduct anthropological reconstruction of these skulls in the Gerasimov’s laboratory. It’s a long process, but the results give new insights into the culture, the art of music, religion and level of medicine at that time. To do trepanation of the skull is quite a complex operation, even for our time, not to mention the Middle Ages.

We excavated five such kurgans. In each of them was buried man with horse. Buried man was accompanied with full complex of horse equipment. In addition, the dish with food was also put near the man. It was a mandatory part of the ritual. Set of accompanying food was strictly defined: a pony tail, rib and shoulder blade.

All of this can be found only in burials of wealthy people. In the accompanying food dishes of ordinary people was only a pony tail.

Presumably, what was the reason of death of these people?

— In this respect we have different assumptions: they could have been killed from disease or in combat, as they were young and combat-ready people.

Thus, there were just a few main points during the excavation of the necropolis. Very interesting combination of musical instrument and medical operations — trepanation, which was made in his lifetime, the construction of burial structure itself and sequence of the rite. Firstly, they digged out an entrance pit and then did side hall, after put back person with all the honors and necessary things. Then the entrance of the hall was closed with logs and stones. Horse was buried in the next pit. On the top of the burial there was a mound, but it was not just a heap stones. First, the sepulchral spot was twined with fence of rectangular or square shape, and only then in the form of a pyramid with truncated top of the mound. 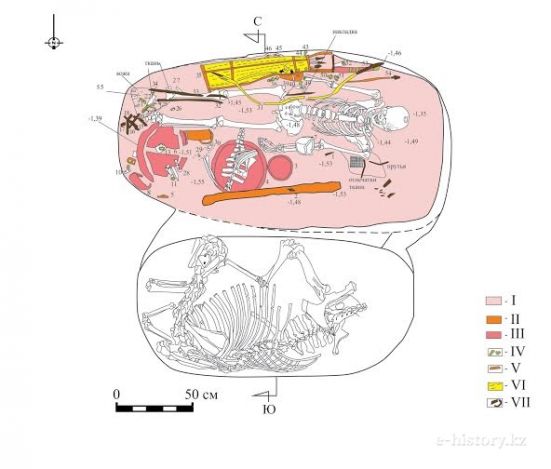 These mounds were discovered as a result research. They were covered with grass, but in some places you will be able to see individual stones. First, we found a mound, then a few, and then it turned out to be a burial ground, where were identified about a hundred burial structures.

Overall, this place is very convenient for life. It seems that a number of people lived in the canyons because traced the remains of dwellings. Near this place there is a mountain river, very thick sward. Winter is favorable here, but the space itself is quite closed. The height found place is above sea level — 1750 meters. According to our assumptions, a special group of ancient Turkic people lived there.