Home News Other How inappropriate to sit in the yurt

How inappropriate to sit in the yurt 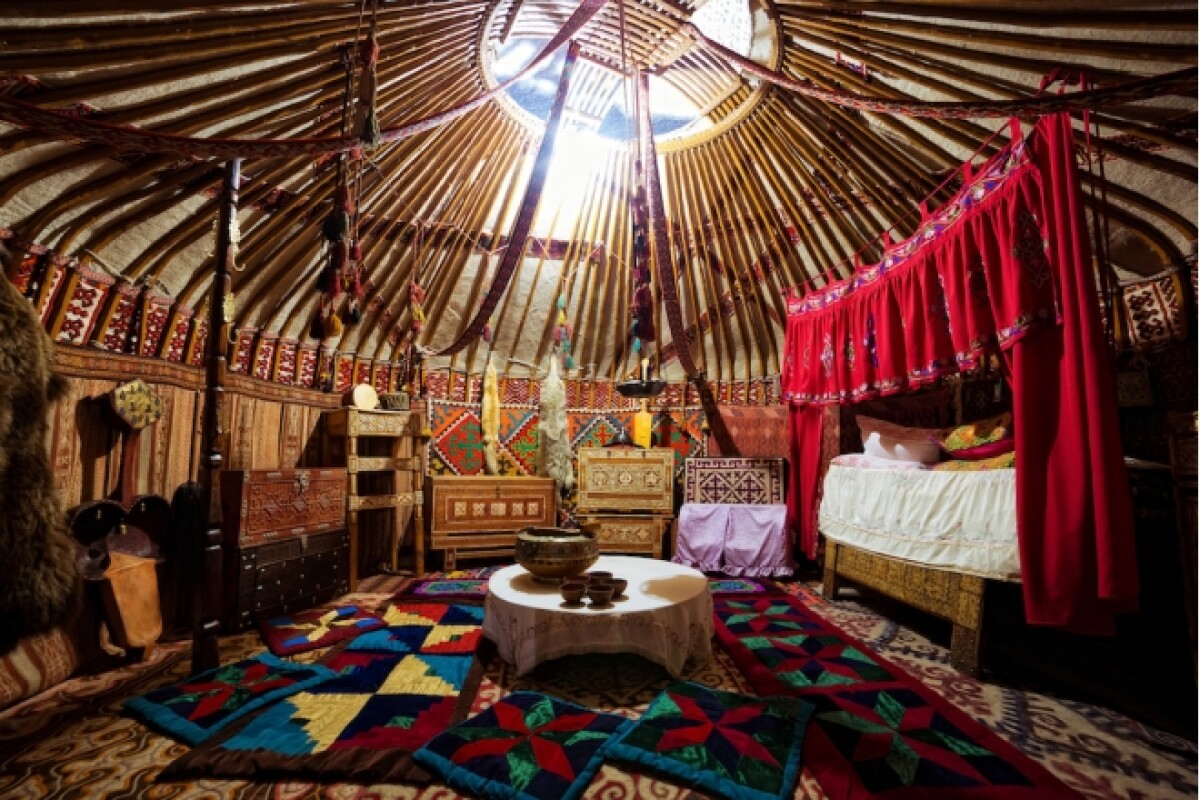 The question of semantics of poses in a yurt hitherto little explored. Etiquette norms associated with how to sit properly in a yurt for men and women are more explored.

Without going into detail in the study of all the complex etiquettes, let’s discuss some of its important aspects.

«To sit by leaning on anything», because it considered as the pose of sick person;

«To sit by propping on hands»:

a. The land — it is a posture of grief and sorrow, which means death of loved ones.
Expression «Zher tayandy» means «strongly grieve, mourn». «Artyna taynba» («Do not lean on back» is the steady ban.

b. «Belindi tayanba» («Do not lean on the lower back») — if it is a man, then this position means «masculine strength (potency) is gone». It is also a posture of morners at the mourning of the dead. N. Grodekov said: «…not all widows are able to mourn. Therefore, mourners are invited to attend the funeral. Mourner props herself with both hands and tilts the body forward» [1]. This prohibition is close to a ban «buyirindi tayanba» («Do not prop the sides of your body with hands». If a woman sit in that position, she may say, «buyirindi tayanba, kimdi zhoktap otyrsyn» («Don not prop the sides of your body, or are you mourn someone?»)

It is prohibited to prop cheek with hand «Zhagyndy tayanba», «mandaidy tireme» («this pose is also considered as indication of sadness, worries, etc.)

It is prohibited to sit with raised hands above the head or put them over the head. Also prohibited to interlock fingers, it means «God will tie the hands».
It prohibited sitting by hugging knee or interlocking hands on knee.

It prohibited stretching in front of strangers. Young people cannot lie and eat in reclining pose in the yurt. It means the pose of sick person.

It prohibited sitting with legs stretched forward, which literally means «god lie on its outstretched legs». This pose is allowed only for small children.

It is not recommended to sit squat in the yurt. This position is considered exclusively for male. Kazakh people consider it as if a person in rush. Usually person who sits in this position got told: «Sit down right! Are you in rush?» Perhaps, it can be explained that Kazakh people believe that «sitting this way (squatting) led to poverty. Only poor people and wanderers who have neither family nor livestock and property sit in such way.

The correct way to sit among the Kazakh men is considered a «moldas kuru» — («legs tucked up»). Married woman should sit tucked her right leg, the left is bent at the knee. Such method is used when men serve meals (pour mare’s milk, tea, etc.), but because they sit on the male side, the position tucked under and bent knees opposite to female.

Apparently, this is due to requirements similar to the Mongolian: «knee of the raised leg… must be directed to the door, so women tend to sit on the right foot and exposed in front of the left knee. On the contrary men’s are on the left, exposing right knee in front»[3]. Women were also allowed to sit sideways, pulling their feet under themselves, thus feet should be covered by the hem of the dress. 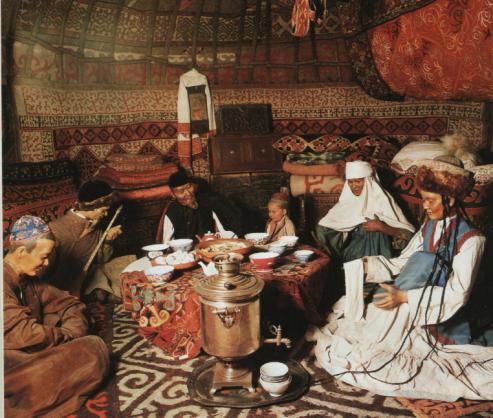 National tradition has developed quite strict «norms of etiquettes» relating to the yurt. In Kazakh tradition rider should drive to yurt from the back side: «pass from the front door of the yurt» considered impolite… We need to stop and tie the horse behind the yurt, and then call the owners with words: «Does anyone is here?» It is interesting that there is a similar restriction which literary means «do not pass the road for a man» otherwise he would have bad luck.

Apparently, this prohibition is related to the semantics of the opposition «front side — back side» («face-back»), as well as perceptions of anthropomorphism yurt. Prohibition to drive from the front side of the yurt was so significant that is included in the common law of the Kazakhs: «If the horse that tied from the front side of the yurt kicks a child, then for the death of him will be paid full hun (hun or kun — compensation for injury or murder). If the horse kicked at the back of the yurt, then the blame will fall on the child. If the horse killed him to death, then only cost of horse will be paid and in the case of aggravating circumstances the owner -half of hun [3].

The whip was used not only for ridding but also as the subject of nomad’s weapons. This prohibition is equally weight with a prescription to remove knives from the belt and left outside. These activities had to show absence of hostile intent of the guest.

It is prohibited to enter to yurt having something in the mouth: «go into the yurt with food in your mouth is not good, but go out is good», «the enemy goes chewing and others go out chewing». If the owner will notices that someone came to him with gum in his mouth, than certainly he will make him spit at the threshold of all that is in the mouth» [4]. Those who enter to yurt should taste the food, literally «touch the food».
Thus, the yurt, being one of the oldest forms of dwelling nomads, embodies a complex ideological complex. Relatively small amount of space of the yurt was clearly marked according to gender, age, position in the system of kinship. Human life begins at the right side of the yurt, and it is completed, the circle of life to confine it.
The main semantic purpose of yurt was to ensure health, fertility and well-being of its inhabitants. Each yurt had «kut» — the keeper of well-being at home and everyone who enters to yurt pronounced the solemn words of welcome and when leaves the yurt said farewell words: «Safe journey!»

Material provided by the Scientific Expert Council of the Assembly of People of Kazakhstan, an article from the book Ph. D., Professor A. Kalybekova «Folk wisdom Kazakhs about education», Almaty, 2011