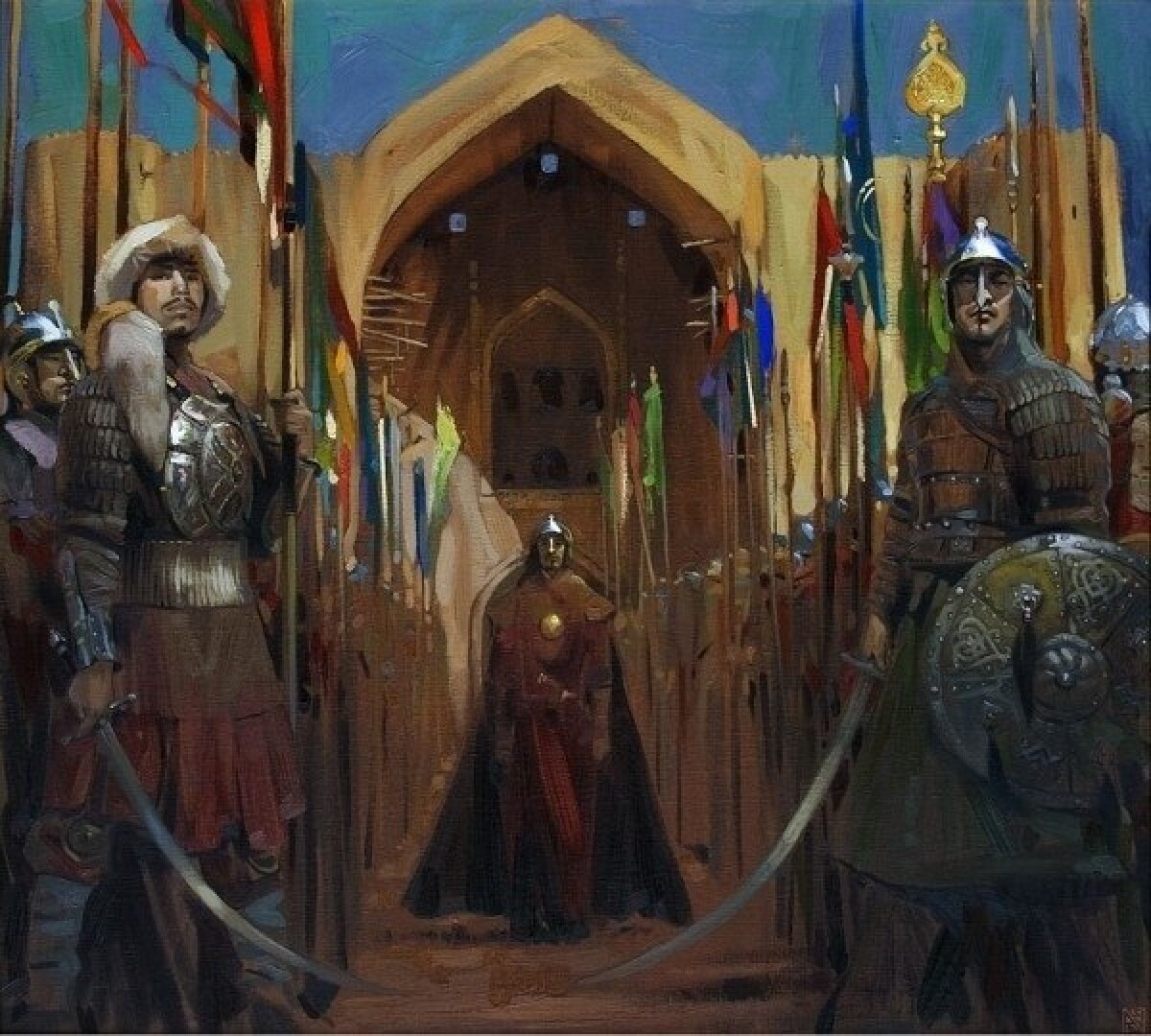 At the beginning of the second half of the 15th century Kazakh khans Kerey and Dzhanibek, descendants of the famous Urus Khan, were the founders of an independent state of Kazakhs. Professional historians for many centuries have been studied its history. Much has been done to clarify the political history of the Khanate, its socio-economic organization, the process of ethnic development, but one of the initial questions — the authentic name of the first Kazakh state — hitherto not include a specific research issues. Although, such form of the question as from establishment of state’s name point of view as well as in determination of state system, ethno-social composition and territorial boundaries can be productive.

Medieval historical narratives do not contain direct indications of how the first state of Kazakhs was called. Contemporary historians refer to it as the Khanate as standing at the head of Khan, or horde by analogy with the former states of the nomads. And since Kazakhs were majority of population, it was called the Kazakh Khanate or Kazakh horde. Each of them, which used in the research literature to refer the Kazakh state of late Middle Ages, is conditional.

The authors of the medieval historical works have used different terms to refer to the Kazakh Khanate. Some of these terms were symbols and former political formations in the area. In some sources of the Kazakh khans still called the pre-Mongolethno-geographical term Cumania-Kipchak or just Dasht / Desht (Kipchak steppe, hereinafter- Desht-i Kipchak — ed.). This term is widely used by the authors of the Muslim (Arab, Persian and Turkic) historical works as the designation of Ulus Jochi (Golden Horde) or steppe regions.
Modern domestic historiography to refer to the steppes of Kazakhstan uses the term East Desht-i Kipchak [i]. In Soviet literature, the region was called the eastern part of Desht-i Kipchak, or the eastern part of the Ulus Jochi, sometimes used dynastic-political term — Ulus horde (horde — the eldest son of Jochi), or used by the military and administrative zoning — the left wing of the Ulus Jochi [ii]. The terms Ak Ordaand or Kok Orda are commonly used in literature [iii].

Ibn Ruzbikhan Isfahani, the author of the well-knownPersian-language works «Mihman-name-yin Bukhara» repeatedly uses the term Desht-i Kipchak, or reduced -Desht, to denote possession of Uzbek and Kazakh khans and sultans, and the Kazakh rulers refers as «khans of Desht». [iv]

However, in the second half of the 14th and 15th centuries, that is, before the formation of the Kazakh Khanate in medieval Muslim historical writings appeared a new symbol of East Desht-i Kipchak — Diyar and Uzbek (Uzbekistan country or Uzbekistan). At the heart of this there is ethno-politonim Uzbeks (uzbekiyan — uzbektsy, uzbekovtsy), which became generalized to the population of East Desht-i Kipchak from 1350–1360’s. At the same time in neighboring regions similar ethno-politonimy Tatars, Nogais and mogul had appeared. All this was a clear reflection that occurred in the region centripetal ethnic processes. However, further evolution ethno-politonima Uzbeks in ethnonym of East Desht-i Kipchak prevented political processes. On the one hand, they led to the isolation of the Uzbeks led by Kerei and Dzhanibek and formation of Kazakh Khanate in 1465–1466 in Zhetisu, on the other hand, to resettle groups of Uzbeks led by Muhammad Shaybani Maverannahr at the beginning of the16th century.

The separation process for new ethno-political community clearly reflected in the report’s wonderful «Mihman-name-yin Bukhara», «Three tribes include the Uzbeks, who are the glorious in the realm of Genghis Khan. Now, one [of them] — shibanity, and his Majesty the Khan (Muhammad Shaybani — Ed.) after a series of ancestors was and is their lord. The second tribe — Kazakhs, who are nice all over the world through the power and fearlessness, and the third tribe — Mangyts, and [among] their kings Astrakhan» [v].

Gradual strengthening of political and military power of the Kazakh Khanate led to the replacement ethno-politonima Uzbeks, firstly to Uzbek-Kazak (uzbak-and kazak), and then just on the ethnonym Kazakh (Kazakh /Kazak). And the term «Uzbek», «left» the East Dasht-i Kipchak with Muhammad Shaybani and his supporters in the Maurya. At first they were called Uzbek-Shibani (because they recognize the power of Sheibanids) and later — just Uzbeks [vi].

Ibn Ruzbikhan wrote in his book a time when the people of East ethnonyms Desht-i Kipchak underwent changes and to replace the term Uzbek and its derivatives was the term Kazak, gradually replaced the former name of the region, where he reigned for over a century. Narrating the relationship of these two terms, the author reflected not only by what he saw the picture, but, obviously, represent the part of the Uzbeks, which has left the Desht with Muhammad Shaybani.

Ibn Ruzbikhan repeatedly refers East Desht-i Kipchak as Uzbek nation. In four areas of his work, he uses the term diyar-and Uzbek [vii]. The context of the messages means all subservient Uzbeks region Desht-i Kipchak. In this same sense, the term is used it three times in Mamlakat-and Uzbek [viii]. And on one page the author has used both terms (diyar, Mamlakat) with the same value.

Speaking of the «negotiations, important days and battles» Burunduk Kazakh Khan Muhammad Shaybani, Ibn Ruzbikhan uses the term-ulus and Uzbek to refer the region [ix]. The Syr Darya River, which Uzbeks and Mongols called the «River Syr» «flows at a distance of more than three hundred farsahs alongside Turkestan, among wintering of Uzbeks, and is lost at the end of the country’s Uzbeks (Bilad-i Uzbek), in the sand, which the inhabitants of the country called the Karakum Desert»[x].
It should be noted that Ibn Ruzbikhan finished his work for eight months, in September 1509, when the whole of the Eastern Desht-i Kipchak completely dominated the Kazakhs. According to Ibn Ruzbikhan «senior Khan (Kazakhs — Ed.) is Burunduk Khan, from the descendants of the Uzbeks, Kazakhs, some of which are called <…> at any time when Chipmunk Khan in all directions ulus Kazakhs sent [orders]" Take the horses to raid», in the same hour were four thousand quivers heroes, each of which was equal to ten of them valiant warriors. Their facilities and equipment were so much abundant that most of [Kazakh] called Hatim Tai [xi] their beggar» [xii].

Here Burunduk was mistakenly called a descendant of Uzbek. Translator and publisher of the works, the famous orientalist R. Dzhalilova, believe that in this passage refers to the Golden Horde Khan Uzbek [xiii]. In the text: az-oulad and Uzbek (of the descendants/offspring Uzbeks from Uzbek descendants). However, the context of this report and other similar posts Ibn Ruzbikhan suggests that it still goes on ethno-political community of Uzbeks, not Khan of the Golden Horde. So Ibn Ruzbikhan in several places of his work at the mention of the Kazakhs elaborates: «Kazakhs are one of the families of the Uzbek ulus Genghis Khan» [xiv], «Uzbeks kind of Kazakhs fought against the troops of Uzbeks shibanitov» [xv].

It is obvious that in the above expression should read: «Burunduk Khan of offspring (number, type) Uzbeks, part of which is called the Kazakhs». This also assures the fact that Uzbek Khan, at first, was not the ancestor of the Kazakh khans and it shibanid historians was very well known. Second, the name of the Uzbek Khan anywhere else in the text «Mihman Nameh-yi Bukhara» is not mentioned. Thirdly, there is his name mentioned without a title. In Uzbek Persian sources in most cases written with the title of Khan — Uzbek Khan [xvi] or the Sultan (king) — Sultan, and Uzbek [xvii]. Speaking of the Kazakh khans, Ibn Ruzbikhan noted that they «come from the descendants of the Yuchi Khan, son of Genghis Khan» [xviii], and «all Kazakhs are ulus of Genghis Khan».[xix] «Yuchi Khan» [xx] Ibn Ruzbikhan repeatedly mentions in his book [xxi]. An echo of this error message can be regarded as Haidar Razi’s writings beginning of the XVII century. «Tarikh-Haidari», where he called the Kazakh Tahir Khan’s son (Pesaro) Uzbek Khan [xxii]. Certainly, we need to see a community of Uzbeks, not Uzbek Khan.

Most often to refer to the Kazakh lands Ibn Ruzbikhan uses the term Bilad-i Kazak [xxiii]. Usual for hin Persian word Bilad (pl. Bäläd from — city, county, state), in conjunction with the ethnonym Kazakh he applied in nineteen cases, he often used it independently. Then the number of mentions (eleven cases) should be term-ulus and a Kazak [xxiv]. This term, in turn, is characteristic of a nomadic Turkic-Mongolian environment. Researchers define as a state in Ulus nomads, «people-to-state», «specially organized people», «people, and this possession». [xxv] It is also often (eight times) uses the term diyar-and Kazak [xxvi]. Persian word diyar translated region, country (and many others of gift — a house, dwelling). The text of the writings of Ibn Ruzbikhan also finds five cases of the term Mamlakat-and Kazak [xxvii]. Mamlakat — country, state, province, state. Sometimes the author gives a noun in the plural Mamlakat: mamalak-and Kazak [xxviii].

Well known Kazakhstan orientalist K. Pishchulina considering the terminology used by Ibn Ruzbihan and other authors to refer the works of the eastern cities, noted numerous examples of «promiscuity in the use of different terms for the same settlements» [xxxiii].

However, we cannot abandon all the options proposed by Ibn Ruzbihanom to designate the Kazakh Khanate. Consolidating the power of the Kazakh khans, access to international arena and, as a consequence of all this, the expansion of the range of the term Kazakh would lead to the establishment of a specific title. I believe that self-reflecting given author «Mihman name-yi Bukhara» examples, but in accordance with the Turkish grammar. For example, Kazakh ulysy, Kazakh memleketі. Also, Kazakh Eli — as tracing terms with Persian words diyar, Bilad. Examples of these items can be found in the neighboring Great Horde (1438–1502), which is now called Takht ale (Takh eli — Throne ownership), Takht memleketi (Takh memleketі — Throne Power), Takht Vilayet (Tak ualayaty — Throne region) [xxxiv], and Takht ulus (Tak ulysy — «capital region»).

Head of Department of the Institute of History and Ethnology named after Ch.Valikhanov.

[ii] The collection of materials relating to the history of the Golden Horde. Volume II. Excerpts from Persian writings collected v. Tizengauzen and processed A. Romaskevich and S. Wolin, 1941, p. 11–12; A. Semenov, On the origin and composition of the Uzbek Shaybani Khan. Materials on the history of the Tajiks and Uzbeks of Central Asia. MY. I. Proceedings of the Institute of History, Archaeology and Ethnography of the Tajik SSR. T. XII. Stalinabad, 1954: 21; G. Fedorov-Davydov, the social system of the Golden Horde, 1973, p. 139–143; v. Egorov Historical Geography of the Golden Horde in the 13th and 14th centuries, 1985, p. 65–66, 160–162.

[vi] The history of the people of Uzbekistan. 2 T. From the formation of the state Sheibanids before the Great October Socialist Revolution. Tashkent, 1947 S. 22–23.

[xi] Hatim Tai — legendary munificent Bedouin. See. S. Ibragimov «Mihman-name-i Bukhara» Ruzbikhan as a source on the history of Kazakhstan 15th-16th centuries. New materials on ancient and medieval history of Kazakhstan. Proceedings of the Institute of History, Archaeology and Ethnography of the Academy of Sciences of the Kazakh SSR,1960, p. 144.

[xiii] Ibn Ruzbikhan. p. 176, approx. It translated in collection of S. Asfendiyarov and P. Kunte: «At the moment the main Khan of the Kazak is Burunduk Khan, a native of Uzbeks», see.: past Kazakhstan in the sources and materials, ed. prof. S. Asfenidiyarova and prof. P. Kunte, the 2nd ed. Almaty, 1997, p. 132.

[xxii] The collection of materials relating to the history of the Golden Horde. S. 215, 274.

[xxix] Ibn Ruzbikhan. L. 101a; Pishchulina KA towns near Syr Darya and their significance in the history of the Kazakh khanate in XV–XVII centuries. Kazakhstan in the 15th-18th centuries (issues of social and political history). Collection of articles. Alma-Ata, 1969, p 30

[xxxiii] K. Pishchulina towns near Syr Darya and their significance in the history of the Kazakh khanate in 15th -17th centuries. p. 30–32.