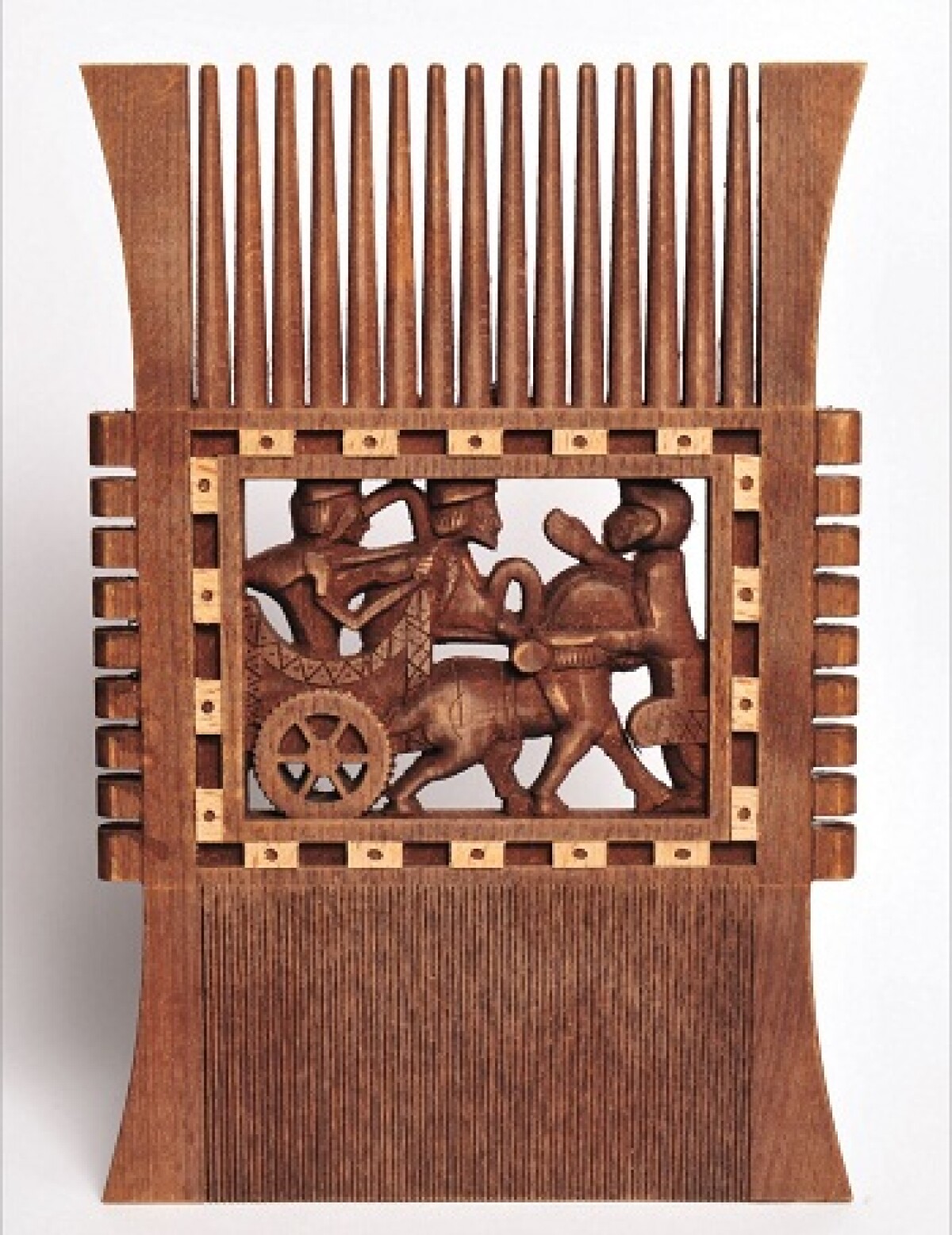 According to the researchers, one of the biggest historical events of the middle of 1st millennium BC — the collision of two worlds: the Achaemenid Iran and nomadic steppe, was recorded here.

During the excavation of the complex Taksay 1 in western Kazakhstan buried a noble woman and rich products from gold were found. A number of household and ritual objects were found here. Also the remains of a wooden box, which contained a small vessel, with mortar pestle and a knife, were found in the burial pit.

All burial was betrayed on fire. Most of the female skeleton was destroyed by fire. Bronze items deformed as a result of the collapse of the roof of wooden grave. However, the most important thing — the remains of a wooden comb, deep-fried and almost turned into charcoal remained. However, due to the fact that the crest was under a bushel, it retained its shape and a clear image of the pattern on it.

During the excavations the integrity of the image and the remnants of the comb as a single object were fully preserved. A piece of land carefully recorded and submitted to the restoration workshop of the famous Kazakh restorer Krym Altynbekov was completely cut out. The original appearance of the comb was able to restore and information on the image on it was able to obtain.

Pioneer of this finding are D.Sc., director of the West-Kazakhstan Center of History and Archeology Murat Sdykov and researcher at the Center believe that Taksay comb enter into the cultural and historical treasure of the world. On the territory of Kazakhstan it has no analogues.

Comb is a two-way, one-piece, rectangular shaped object made using a thin thread of poplar wood. Comb found in very poor condition: he was nearly destroyed by fire. Comb’s width is 11 cm, height — 17cm and thickness of the product — 0.5 cm. 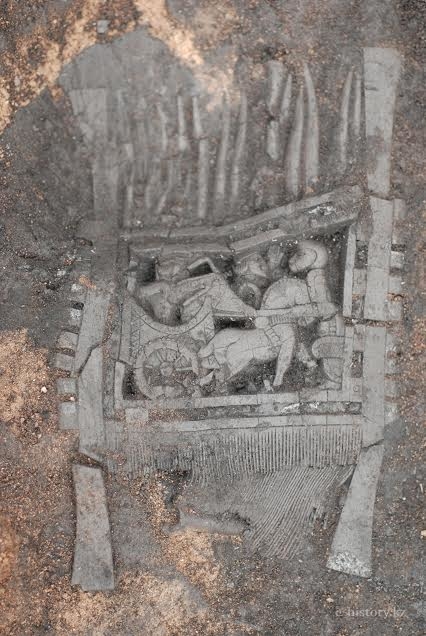 Findings consist of three parts: upper, lower and central decorative gears. The basis of the side panels is rectangular in the central part of the trapezius and expanding the upper and lower parts. The upper part of the ridge is composed of 13 large teeth. They are round, but different in size. In the lower part one can see the small teeth 79 are also disposed between the side bars. The Kinks are the same, cut carefully, probably with a special saw with two blades (one for cutting and the other — for basting), a cross-sectional round. The inner edge of the teeth is outlined with carved straight line. 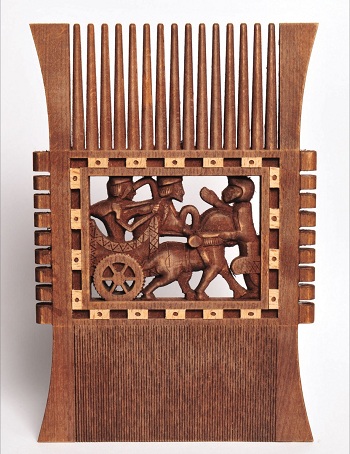 Reconstruction of Taksay comb made by famous Kazakh master K.Altynbekov

The central part of the comb is a carved composition in a rectangular frame. Frame isolated on the perimeter of the recess, which are rectangular wooden inserts, decorated in the center of the cut out circles. In the rectangular space frame inscribed carved sculptural composition, realistically depicting the battle scene between two soldiers, charioteers and foot opponent.

War chariot takes a dominant position in the composition. It is a two-wheeled and it harnessed two horses. The body of chariots is massive and box-shaped. The pattern in the form of an elongate trapezoid is applied in the central part of the frame. It outlined with the side carved lines between of which applied a small vertical incision. Perhaps, it is an imitation animal skin. The axis around of which the rotating wheel with 8 spokes and spikes on the rim passes under the floor of the wagon.

Horses shown at the time of the stopped run: heads pressed on chest, neck curved like arch, front legs bent and raised. Horses have short mane, shown in a low crest in the form of scars. Lips prominently highlighted, the bits in the mouth is shown in short line. Reins are shown as a wide belt. 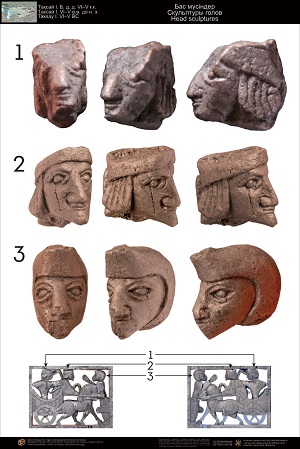 Images of soldiers in the central part of the comb

Two characters are shown in the chariot. A warrior shooting from archery is shown in the foreground. It is a man with short straight hair, a round hat with a flat top.
It can be seen that the charioteer has forehead, almond-shaped eyes and a large elongated nose. Unfortunately, there is nothing to say about the clothes of a warrior. 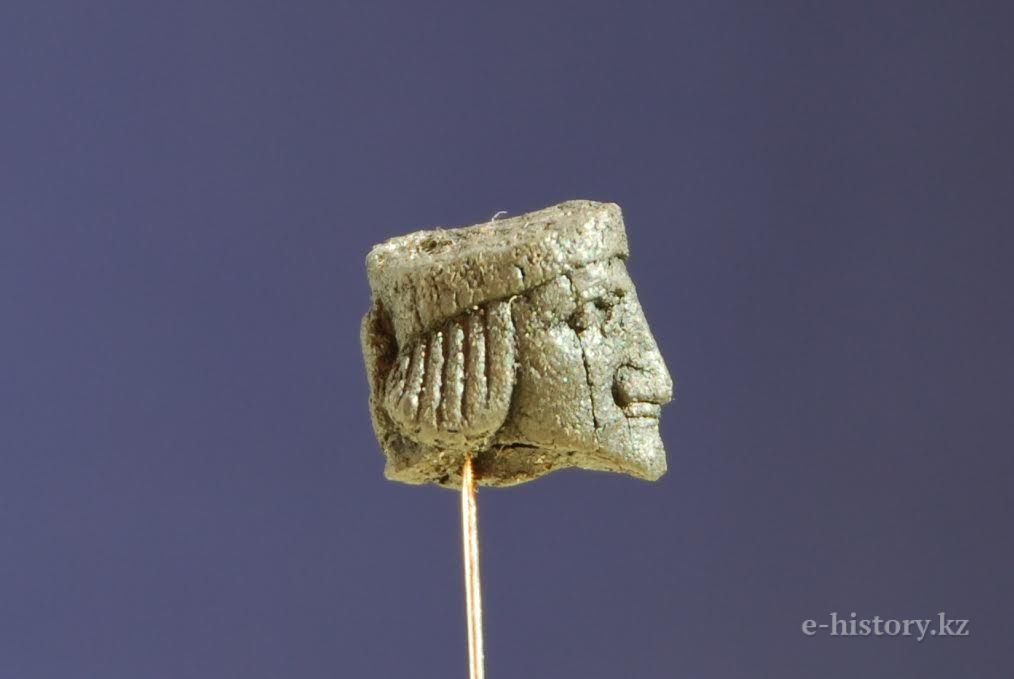 The rider is armed with a complex type bow. Warrior’s left hand which holds a bow is pulled forward and upward. His right hand is at chest level. Part of the string passes right in the face of a warrior. His gaze fixed on the enemy, which is depicted on the right side of the comb. 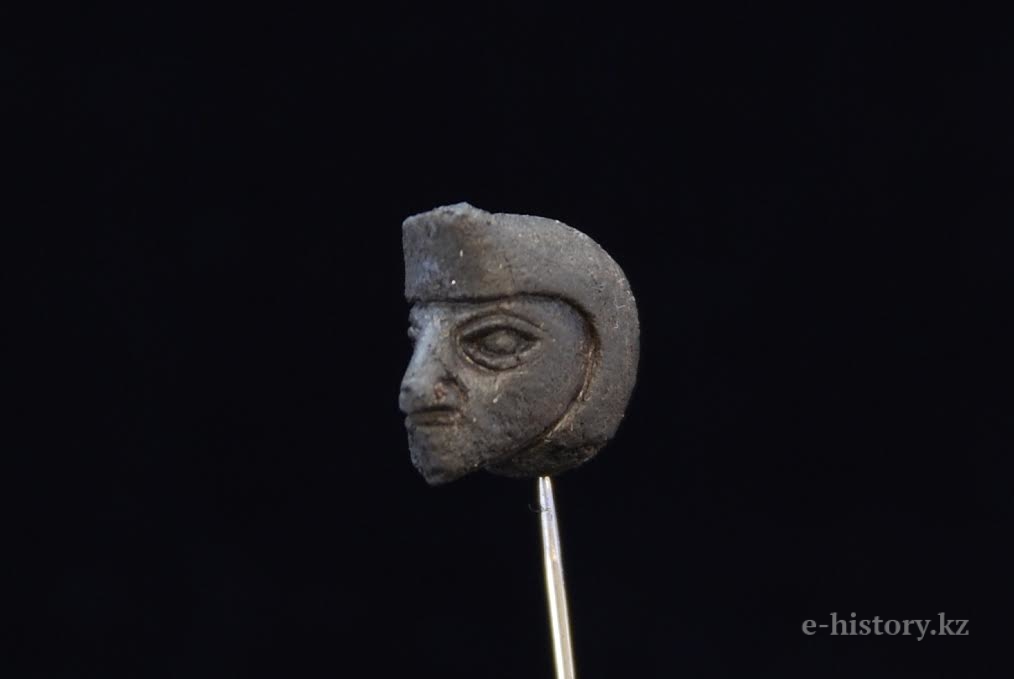 Chariot is controlled by the charioteer, whose right hand reins, as if holding back a horse. It is beardless man wearing a round hat with a flat top. He had a low forehead, a narrow chin, almond-shaped eyes, narrow cheekbones, large, elongated nose and thin compressed lips and close-cropped hair. He is portrayed in the clothing loose-fitting with wide sleeves, tapering to the wrist. In this case, the sleeves are decorated with an ornament in the shape of triangles, repeating the pattern of body chariot. The driver is surrounded with a belt.

Group of horsemen is opposed to foot soldier, whose left hand holds the reins and his right hand held up to strike the driver. He stops the horses at full gallop. He is a man in a helmet head-dress which completely covers his head and ears. You can see that he has a low forehead, almond-shaped eyes and slightly elongated, large straight nose, round chin, strongly projecting forward and pursed lips.

He is dressed in a short coat, belted waistband and wide trousers, strapped at the ankles. On their feet with shoes pointed toe. On the left side of the warrior is a quiver, placed horizontally and hanged on the belt, which consists of four oval-shaped elements.

Researchers of Taksay comb believe that in the decoration of the comb depicted the epic battle between the Persians and the Sarmatians.

M. Sdykov, Doctor of Historical Sciences
Ya. Lukpanova, researcher at the West-Kazakhstan Center of History and Archaeology