Batyrs (warriors) considered an honor to die in battle 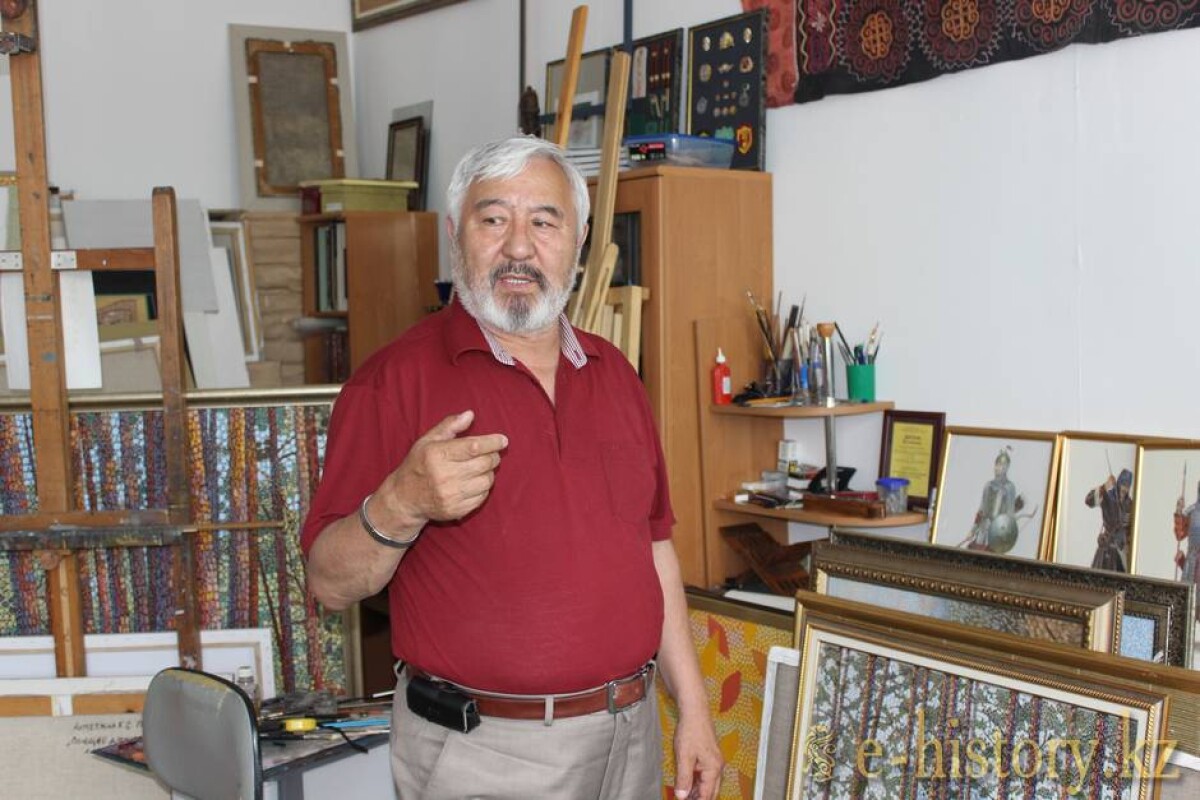 Military valor of Kazakh warriors was praised for centuries. Artist, historian Kaliolla Akhmetzhan told about weapon which was used by our forefathers conquered, and warriors’ Code of Honor.

Kaliolla Akhmaetzhan is the famous artist, historian and ethnographer in Kazakhstan. He is one of the few scientists who bit by bit restore the history military affairs of Asian steppe men, which was considered «one of the most advanced military systems of the Middle Ages», engaged in scientific and artistic reconstruction of weapons Kazakh soldiers who collect facts about the steppe chivalry — batyrsvo.

Gradually the artist’s interest in military affairs of the Kazakh people on the basis of a painstaking study of historical and archaeological sources, the Russian chronicles and Turkic epics resulted in a book, «Ethnography of the traditional weapons of the Kazakhs» and reconstruction of military weapons. Thus, for the first time he presented a comprehensive vision of the history of war and weapons of Kazakhs.
Kaliolla Akhmetzhan, please tell us about the reconstruction works on weapons of nomadic warriors from different eras.

— After joining of Kazakhstan to Russia the tradition of serving of warriors to khans disappeared, respectively, the martial art gradually began to lose. Information remained in the epics and other written sources, but they should be collect one by one. I made a reconstruction of weapons for the book, but it is still unable to see the edge of how much we should learn about weapons and martial art of nomads. 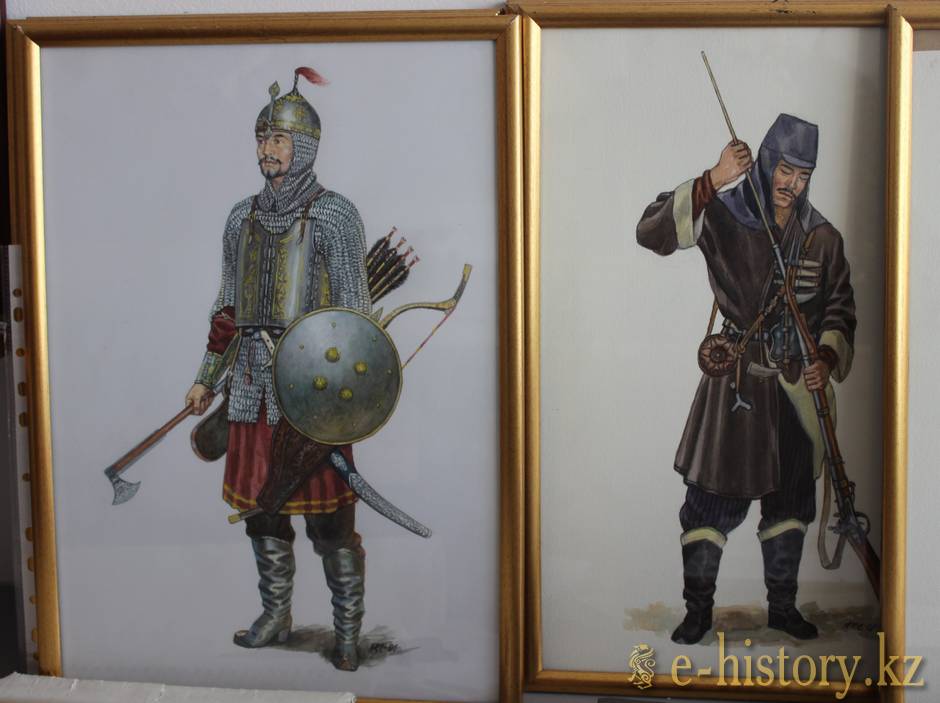 This is reconstruction of weapon of warriors-nomads from different eras. It was made on the basis of archeological monuments, graphic, written and oral sources, therefore reliable. For example, it is the weapon of Kazakh Sultan — the military mirror belonged to sultan Arystan. Helmet, ax — all these things can be seen today in museums. I did not come up with anything. I restored a picture of how weapon and armor were worn.

What differentiated Kazakh warrior from other warriors-nomads?

— Turkic people have many similar types of weapons, because it is essentially a single culture. However, it is very different, for example, from Dzhungarian culture where traces of Buddhism were found. In general, Kazakh, Tatar, Uzbek and Kirghiz soldiers have common form of armor. For many centuries they were in one state system, there were interference and a common type of weapons was formed.

What weapons should possess a warrior?

— Kazakhs have a saying: «Er karu — bes kary», which means «A warrior has five types of weapons». Warrior should have five types of weapons and skillfully use them: it is chopping (ax), cutting (saber or sword), shooting (bow), stabbing (spear or peak) and strike weapons (mace or flail). Each weapon has its own varieties. These five types of weapons cannot replace each other. They have been used only in the aggregate. It is noticeable that their versions are interchangeable.

There were four types of armors, which distinguished by the system of creating protection. For example, ringed armor or chainmail has convolved from metal rings. Scaly armor was made of metallic flakes, which were sewn on leather base. 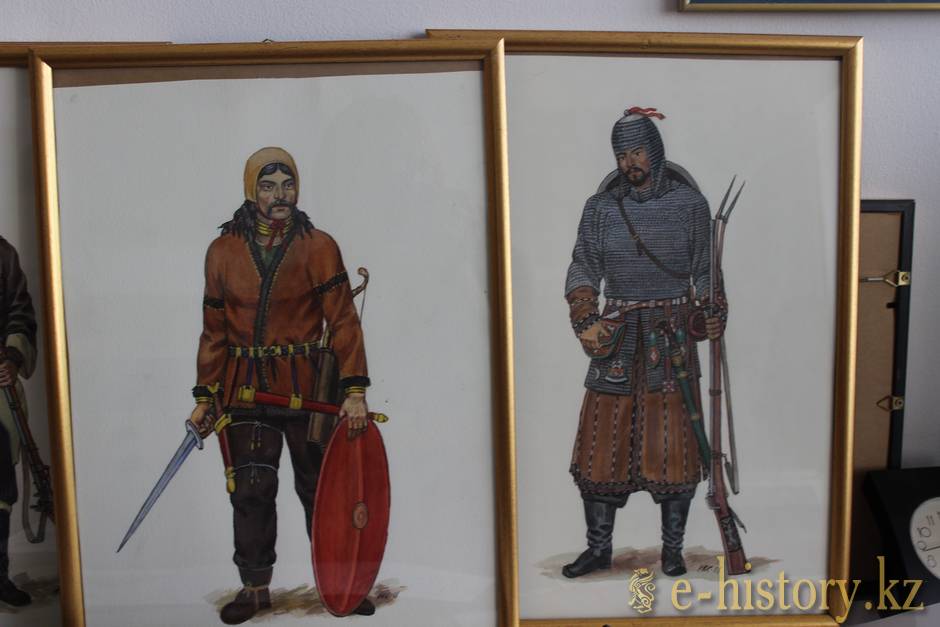 Sarmatians and Scythians had short jackets and short leather boots. Modern army has adopted much of the ancient warriors: the types of clothing and ways of carrying weapons.

What were the rules of battle of Kazakh warriors?

— It was a whole martial art, which he had been taught, that evolved over the centuries. For example, there was a certain way of constructing the troops before the battle. Usually it was a three-part construction: the center, right and left flank. Each army was based on the decimal system. Ten soldiers formed a detachment — ondyқ, or «ten», which was directed by foreman. The ten dozen created «hundreds» — zhuzdіk, led by zhuzbasy — centurion. Ten hundred formed «thousand», or myndyқ, led by mynbasy — «the thousand». The «ten thousandth army» — tymen was created from hundred soldiers. 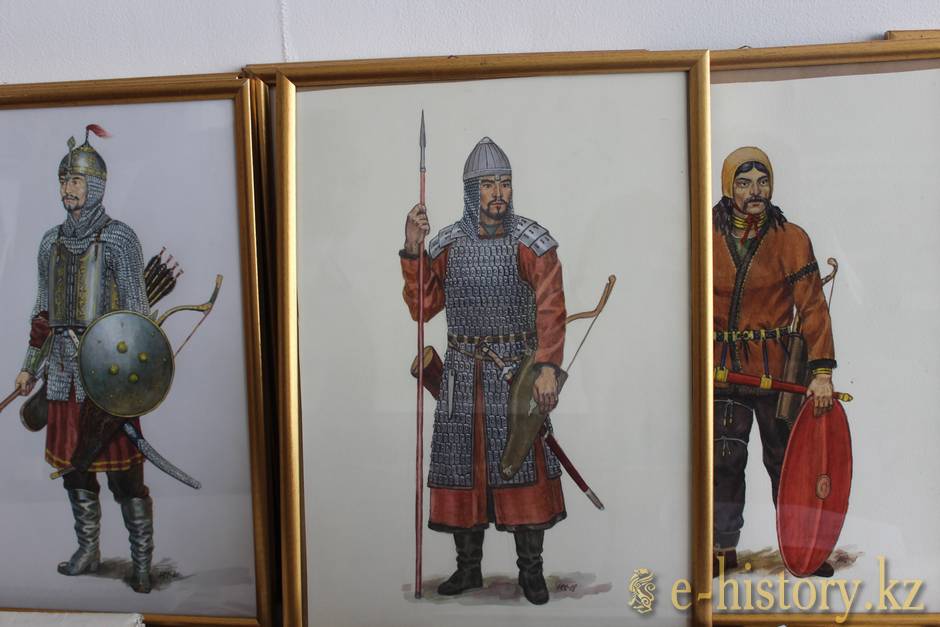 At the very beginning of the battle armed horse-archers easily entered to the attack and surrounded enemy forces. This fighting technique called tolgama or carousel. Certainly, the enemy succumbed, because usually the army built frontally and goes forward. And then the army shelled a bow from all sides, the combat system was destroyed, riders and horses were killed.

Then spearmen and pikemen entered to the fight and began a frontal attack. When the enemy army was scattered, there was complete destruction of the enemy.

In what cases a sword was used in battle?

— Once army was broken a sword, ax and mace was used. Hand to hand combat was often used. There are cases where false retreat was used in battle. For example, a small detachment that played as if it losing attacked. Detachment gradually retreated, when there was shooting a bow (all the nomads were able to shoot a bow on the left and right hand). When the enemy forces pursued the retreating embark squad the army that was waiting for the enemy came out of the ambush.

Before the fight warriors had organized duels. Noble warriors from every troops participated in the center of the battles. On the saddle of warhorse of batyr a small drum beats in which warriors professionals call each other was fastened. Apparently, it had some bumps that each warrior knew «their» and «foreign». Also drum signals which meant troops retreat or to report the victory was different.

If one of the batyrs won, the battle between the troops did not happen?

— There are different situations. The duel was arranged between the batyrs, who had the same status: noble caused noble, elderly warrior elderly and young caused young. If person without any status want to enter the fight, the match could not take place. For many people there are general rules for duels and fights. The fight lasted up to three wins, if one side won all the time, then the other side, feeling its weakness could retreat.

The duel for batyrs was a way to solve the collision without a lot of bloodshed. Batyrs were professional warriors, like samurai or knights, who all their life engaged in military affairs, professionally owned weapons and military art. Therefore, commanders tried to decide the outcome of the battle through the fights of batyrs. The army could retreat if the enemy had a lot of batyrs.

Batyr’s fight was an important part of the military, and it showed the power of the troops, and the possibility of destroying the strongest professional soldiers, from which depended on the outcome of the battle. In the modern sense, this style of fighting was common among all of Eurasia.

Kaliolla, please tell us about the what was the batyr’s Code of Honor?

— Batyrs were a particular social stratum. They only deal with military affairs, employment other business was considered a disgrace. The profession batyr passed down from generation to generation, from father to son. A boy born in a family of knight, was bound to become a warrior. If a young man was not willing to engage in military affairs, he was condemned by others, as batyrs defended their land against external enemies and maintained internal order.

In one of the Kazakh epics there is the story of a young man Suyunishe, whose grandfather and father were brave men, but he himself was 19 years old did not take up arms and went on military campaigns. People are condemned him, fearing that the glorious tradition of brave men in his family on it will fail, i.e. the chain-shynzhyr will break the transfer of the military profession from father to son. The young man felt ashamed. Went to his father and asked him the blessing to go hiking. Father blessed him and gave his weapons.

Batrs, same as knights and samurai had Code of Honor. In the first place it was respect and loyalty of their profession. Warriors did not afraid of death and dreamed to die in battle. Die in bed was considered a huge shame. For example, Olzhabay batyr, who fell ill and died in bed. Being unable to die on the battlefield as a warrior he gnawed his fingers. 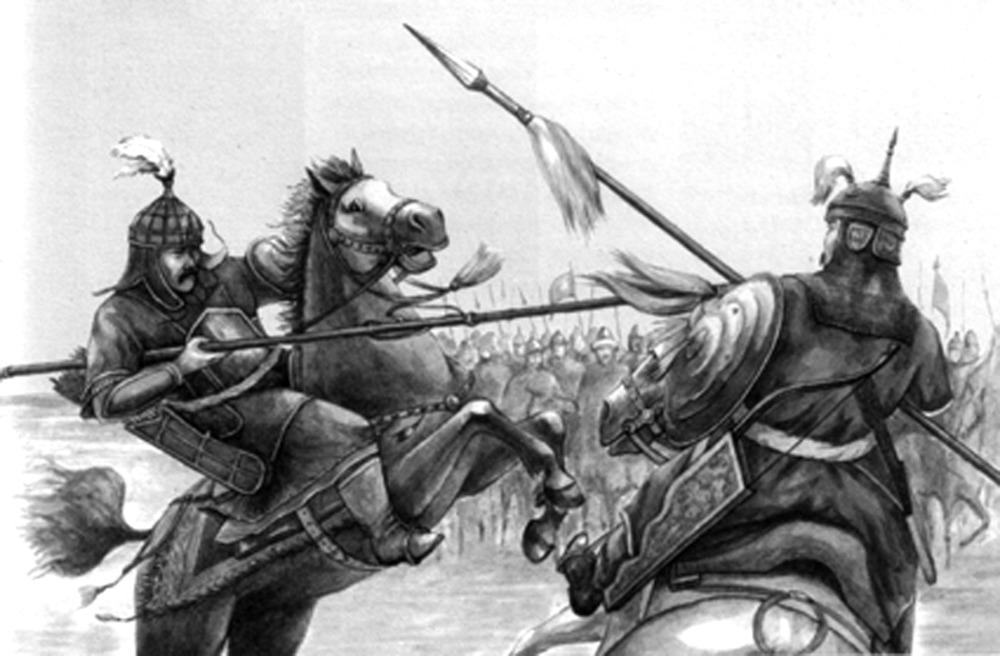 Batyrs should had masterfully made weapons, which were very honored by them. War horse was the protector and friend: horses rescued and protected their riders during the battle. They were taught how to dodge in the battle against armed horsemen arrows while they were little foal.

In batyrstvo as in chivalry, there was a love to a beauty.

Batyrs used to dress beautifully. They were inspired by female beauty, protected and helped people — it was part of their lives. When they came back from a trip with the trophy, anyone could come to their house and say, «sauga» and warrior could gave all that he was asked for.

Dealing fair battlefield was very important for the warriors. There is the story in the epics, at the beginning of the battle if one of the warrior did not have family and children, then the fight was stopped immediately. And warrior sent his opponent back, saying that the fight will resume after a year or two once he will have descendant.

Batyrs were generous in the action and even in relationships with opponents. There are cases when opponents after fights became friends. Professional warriors, also known as batyrs, have always been the support and advisers of Khan. They were actively involved in addressing both domestic and foreign policy.