Home News Other Visiting the Kazakhs of Mongolia

Visiting the Kazakhs of Mongolia 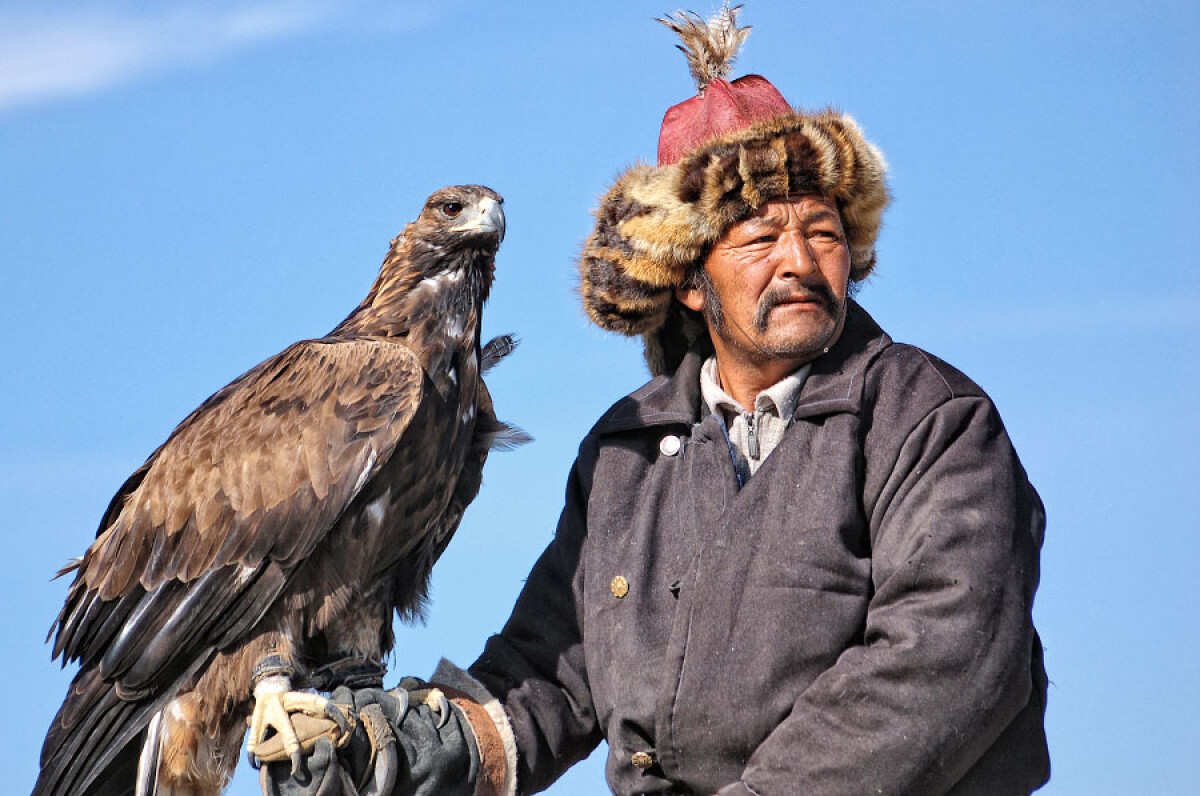 Professor S. Azhigali went to Mongolia to learn how Kazakhs live there, whether they speak in the mother tongue and whether they want to return to their historic homeland.

For over ten years the department of Ethnology and Anthropology, Institute of History and Ethnology named after Sh. Ualikhanov have been study Kazakh ethnic groups abroad, led by the head of department, Professor S. Azhigali. For this purpose, recently, scientific trips have been organized regularly to countries near and far abroad.

So, in 2013, a complex and quit continuous expedition to Mongolia and China was held. During the expedition to Mongolia, which was held from July 24 to September 5, 2013, a group of researchers-anthropologists examined localities in the central, north-eastern and south western part of Mongolia, i.e. areas of residence of the Kazakhs out of the «Kazakh» Bayan-Olgii Province: Tov Province (Ugtaal district, Erdene district, Nalaikh town), Selenge Province (Sharyngol, Khongor and Darkhan), Khentii Province (Shandygyn and Berkh), Khovd Province (Uench and Bulgyn), etc. Perhaps readers will be interested to read some of the observations obtained during this complex scientific expedition. 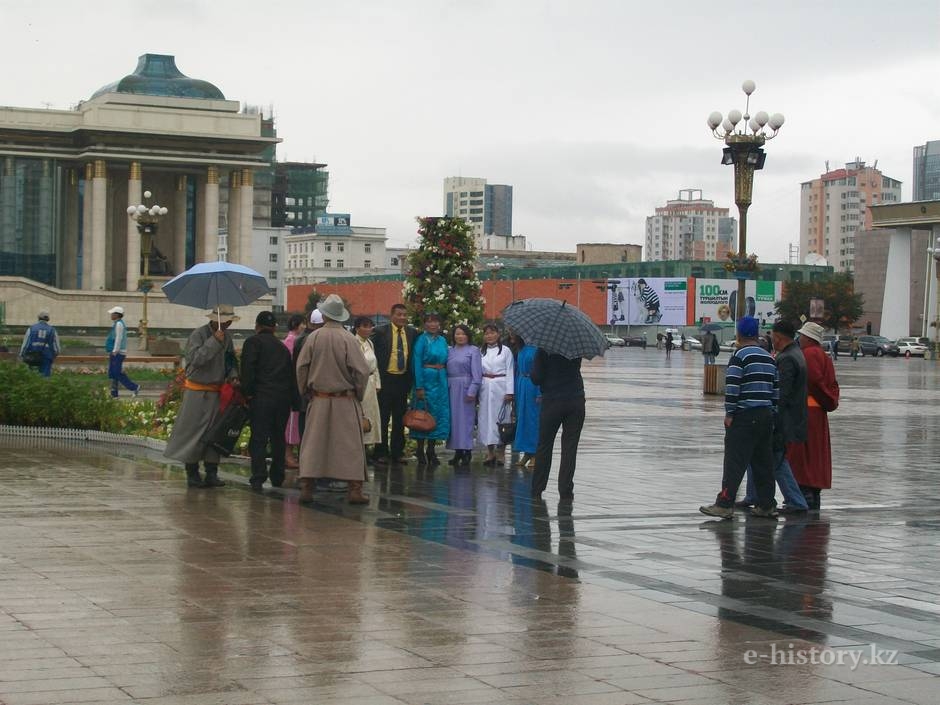 On the streets of Ulan Bator

Mongolia — a country with a small population, its population does not reach three million. Kazakhs is the only ethnic minority in this country of not Mongolian origin. Zakhchins, Dorbets, Buryats, Uriankhai and Torghuts have another language, as well as some cultural differences with respect to the Khalkha Mongols, therefore also ranked in this category.

According to the local Kazakhs, Mongolia is grace, earth stored by God. The Mongols were able to preserve their land and themselves as a nation situated between two major powers: Russia and China. Thanks to the wisdom and foresight of the leaders of the socialist period, the perestroika and post-perestroika era, in the country was saved nomadism. Until now, there are no obstacles on the part of the Government of Mongolia for the comprehensive development of animal husbandry — free grazing, economic arrangement, etc. Thus, due to the preserved nomadic and semi-nomadic pastoralism, the Mongolian people have never needed.

Kazakh schools in Mongolia only work in Kazakh province of Bayan-Olgii. Here the Kazakh language and Kazakh music can be heard everywhere.
Outside of Bayan-Olgii in other Mongolian Provinces there are no available Kazakh schools, so young Kazakh people know Mongolian sometimes better than Kazakh language. Hinting at our frequent recourse to Russian lexicon, one of our interlocutors Onerhan, 53-year-old driver from Ulaanbaatar, without any reason, said: «Soon we will need a translator to communicate between Kazakhs from different countries». This picture is quite possible to meet in practice. To understand each other, in conversations with young Kazakhs in Mongolia, sometimes we had to use English language.

Local Kazakhs have a close relationship with Kazakhstan. Many people have close relatives living there. Thus, our compatriots from Mongolia, being the first time in their historic homeland, tend to pass on all the major cities. Local Kazakhs want to participate in public life of Kazakhstan. Thus, the 66-year-old Sanak Koshpanuly from Bulgyna (Khovd Province) in the west of the country lamented the fact that to the World congress of Kazakhs was invited mostly Kazakhs of Bayan-Olgii. Our compatriots from other regions of Mongolia, as it turns out, are left out of this important both for foreign Kazakh diaspora and for the Kazakh society activities. 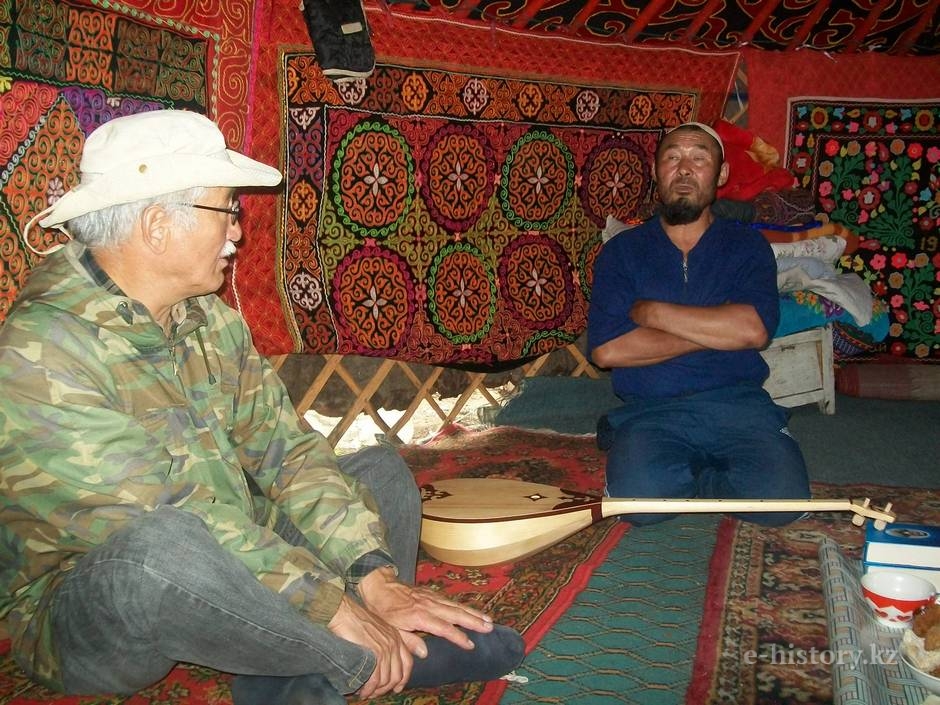 Meeting with the Kazakhs of Mongolia

To the question «Would you like to move to Kazakhstan?» Responses were different: people with stable, decent financial situation said that they are not in a hurry to leave. 57-year-old Batolzy from Ugtaaltsaydam district in 1991 sought to travel to Kazakhstan. At that time, people, who campaigned to leave and promised to take him to any place at will, were asked to write where. Batolzy enrolled to Semey, collected the necessary documents. After some time a car came, but from Aktyubinsk. «Maybe I did not go in vain then. But some returned back there, unable to withstand the difficulties the new place» - thoughtfully and wearily he says. Many people know that about a year ago, a fairly large group of Kazakhs, once moved to their ancestral homeland of Mongolia, appealed to the leadership of this country to come back. In Mongolia this fact we spoke with obvious disapproval: «Everywhere there are difficulties, we are often in Kazakhstan, and we do not think that everything would be so bad». 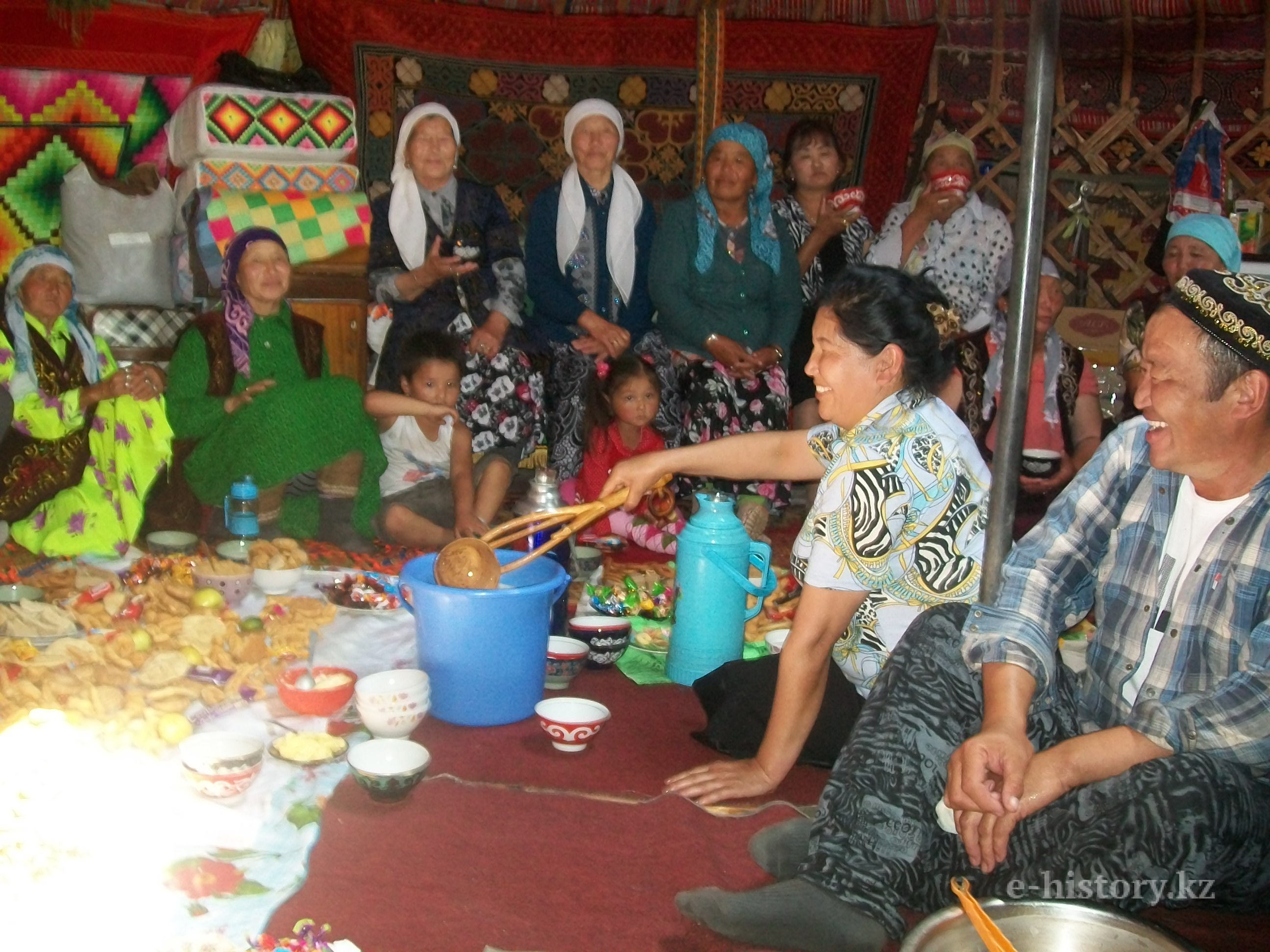 As in Kazakhstan, Kazakhs in Mongolia recently feel the strong influence of Islam. Zulkarnay Bekbayuly, 75-year-old resident of Khongor district, said that today’s young people become religious and old read namaz. In Nalaikh distrcit, a town near Ulaanbaatar was recently opened a large mosque with a dormitory for students of madrassas. It was built and financed by the Turkish side — a religious organization called «Dos». April 12 last year, the Turkish Prime Minister R. Edogan attended the opening ceremony of the mosque. The building of the mosque is two-storey. Nalaikh-Konisk cultural center and the local office of the Association of Muslims of Mongolia located on the ground floor, on the second — the actual prayer hall.

Muslim literatures in mosques mostly are in the Mongolian language. Sermons also here mainly conducted in Mongolian. Muslim clerics have shared with us their plans: to bring soon religious literature in the Kazakh language of Bayan-Olgii, and also agree with the Supreme Mufti of Kazakhstan about the arrival of a new mosque in Nalaikh mentors who have held religious classes, and at the same time could have taught Kazakh language. Today in Nalaikh there are one Buddhist temple, two mosques and seven Christian congregations’ unorthodox ways. In other words, there is invisible serious competition for the minds. In an effort to attract people to the mosque in the first place, of course, Kazakhs, its servants pay attention to every parishioner, every resident of the Kazakh district Nalaikh. 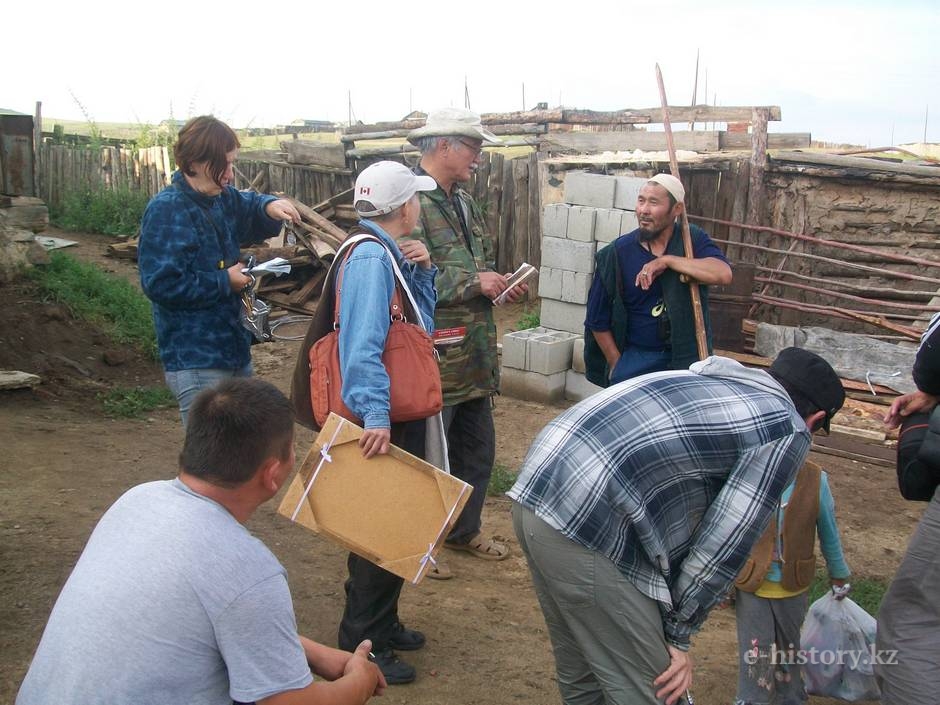 Members of expedition in the yard of a resident Sharyngol

Globalization processes are increasingly penetrated into the local environment. Tolegen Satybas, 38-year-old Nalaikh resident, seriously engaged in power-lifting, travels to international competitions. He was often in Kazakhstan, thus he already speaks with Kazakhstan accent: with the Russian words, without the characteristic for the Kazakhs of Mongolia and China improve intonation at the end of offers, etc. Tolegen is local businessman with a group of fellow digs mine produces coal. Extraction of minerals in Mongolia and is available for ordinary citizens, subject to the payment of appropriate fees and authorization. In addition, he has business in Dubai — carries novice campers, helps with the arrangement, shopping. Mongolian tourists unlike Kazakhstan only learn this resort. Tolegen’s speech is mix of Kazakh, Russian and English languages. Trips abroad have left their mark on his appearance. He stands out from the crowd not only because of his athletic figure, but also extravagant clothes.

It turned out that Mongolia have much to learn. For example, each Kazakhs there claimed that Mongol never on his memory did not allow himself to hurt the feelings of ethnic Kazakhs. Each of them is safe to say that «they do not do that», «from their part such was never happened», «they are not capable for this».There is a sense of gratitude to this people for their natural peacefulness and kindness to our kins. Perhaps, the representatives of diaspora in any country spoke about indigenous people. In other words, everyday nationalism in Mongolia is virtually nonexistent. The government has not assimilating policy here — neither explicit nor hidden, but trust between ethnic groups in the end lead to a natural blending of cultures and ultimately to mongolisation of Kazakhs as minority ethnic groups.

Gulmira Orynbayeva,
Ph. D. in History,
Senior Fellow at the Institute of History and Ethnology named after Sh. Valikhanov