Museum of Internal Troops of the Republic of Kazakhstan 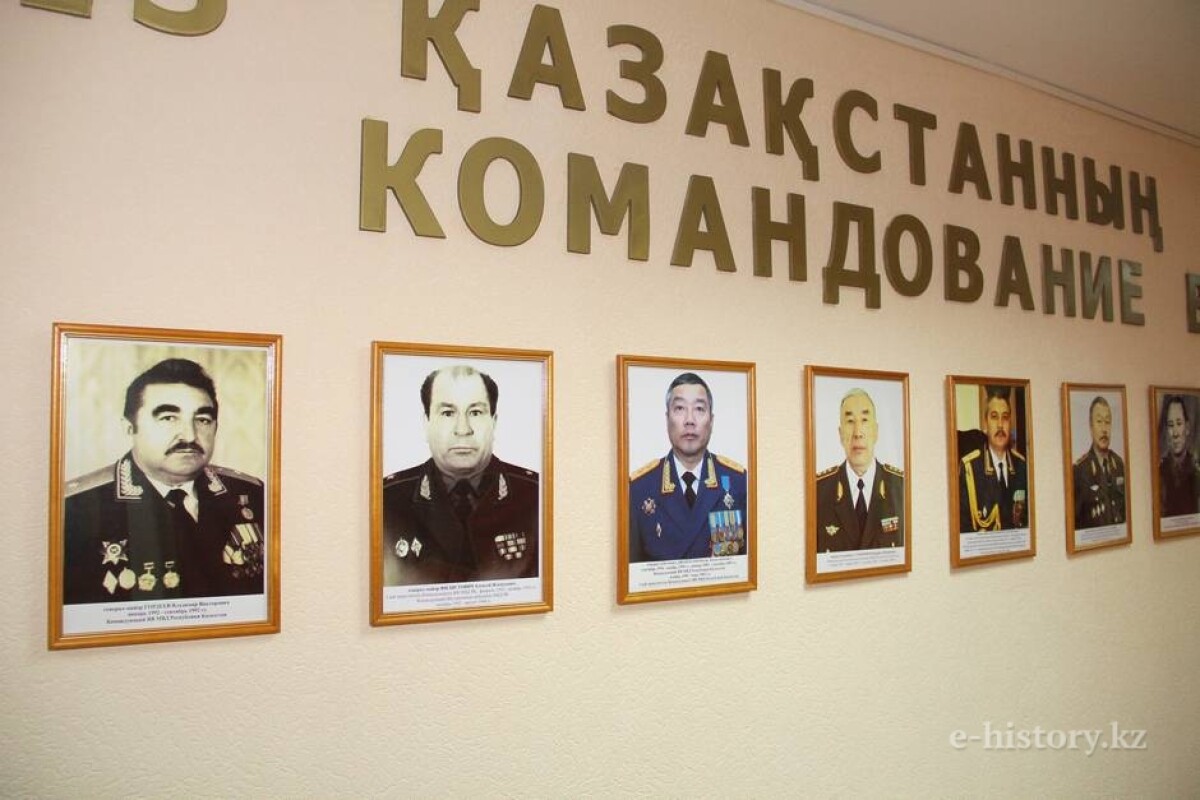 Internal Troops of the Republic of Kazakhstan were established on January 10, 1992 by the Decree of the President of N.A. Nazarbayev, however, they date from 1917.

At that time the first detachments guarded Smolny during the October Revolution, in particular, Armored Division named after Sverdlov. At first, this detachment guarded the government in St. Petersburg, then the Kremlin in Moscow. Later the division participated in suppression of the kulaks and basmachi uprisings. 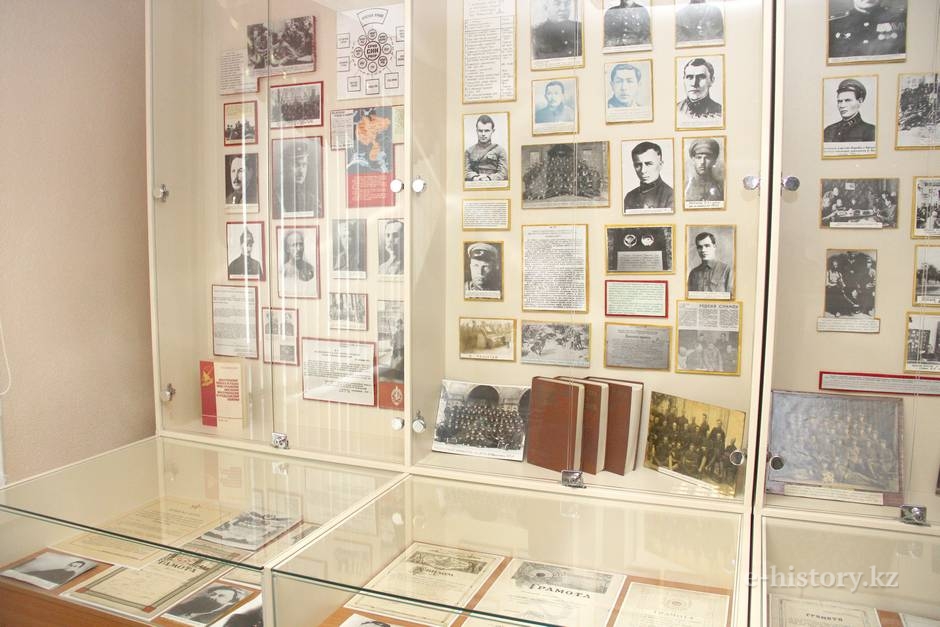 1920 is considered to be the year of establishment of Internal Troops in Kazakh Republic. Ural Cossack front was broken, and it became clear that the war under the leadership of the Military government can’t be won. Then the Urals took control of the fight against Bolsheviks. 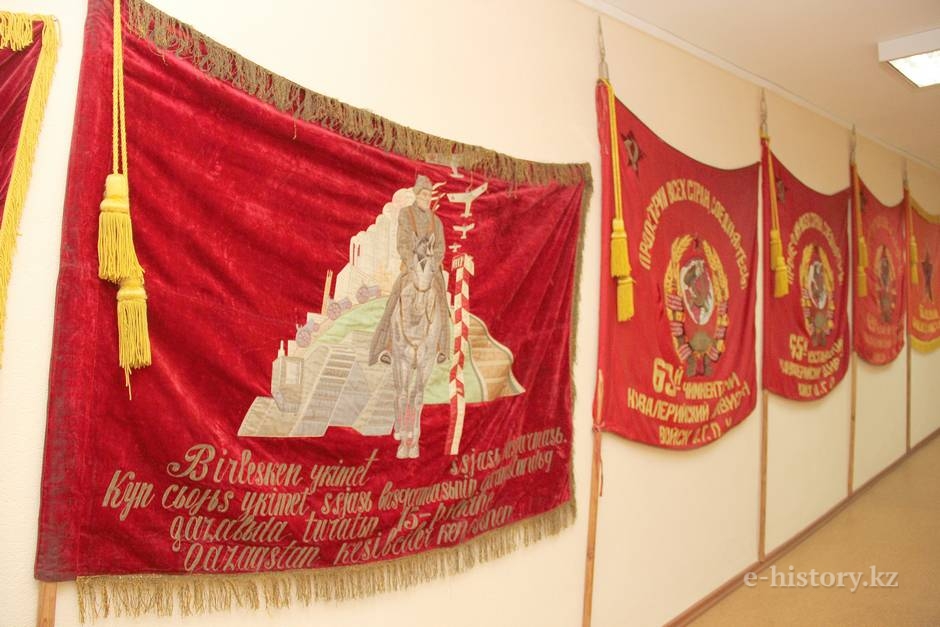 This 80-year standard is handmade original. It belonged to Karkaralinsk regiment of the Joint State Political Administration which was deployed in Kyzylorda region and dispersed basmaches to the territory of South Kazakhstan, Turkmeniya, Uzbekistan and Tadzhikistan.

In the early 40-s propaganda of service in the armed forces of the People’s Commissariat for Internal Affairs (NKVD), which was transformed into the Ministry of Internal Affairs of the USSR in 1946, began throughout the Soviet Union. For example, the Battalion of Internal Troops, Almaty operational regiment, fully armed, climbed the Komsomol peak. They also had horse and ski marches. Five soldiers of the Joint State Political Administration troops in the February 40-degree frosts passed 3000 kilometers from Baikal to Murmansk using skis. 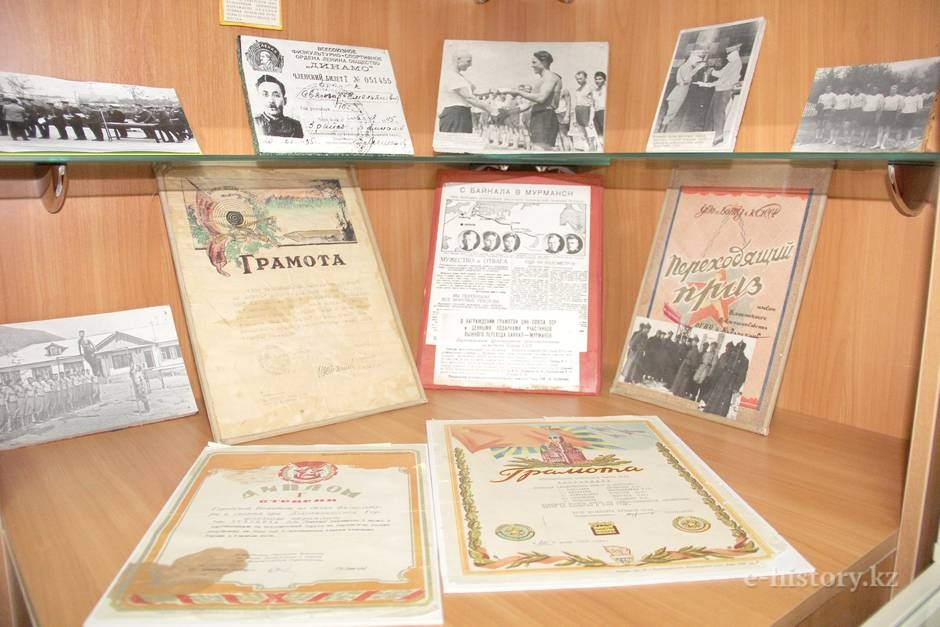 At that time the NKVD also included frontier troops. Therefore, border guards of internal forces were sent to the Halkin-Gol (Ed. fights on Halkin-Gol river in 1939, when Japan attacked Mongolia), participated in the Finnish war. As we know, the troops of the NKVD were the first who were attacked in the Great Patriotic War. The famous Brest fortress was defended by frontier guards and separate 132nd battalion of the NKVD troops.

Everybody knows the story of this photo. Three soldiers, who fought to the last ditch, scratched on the wall of the Brest Fortress, «We were three and we die». They were soldiers of 132d Battalion of NKVD. 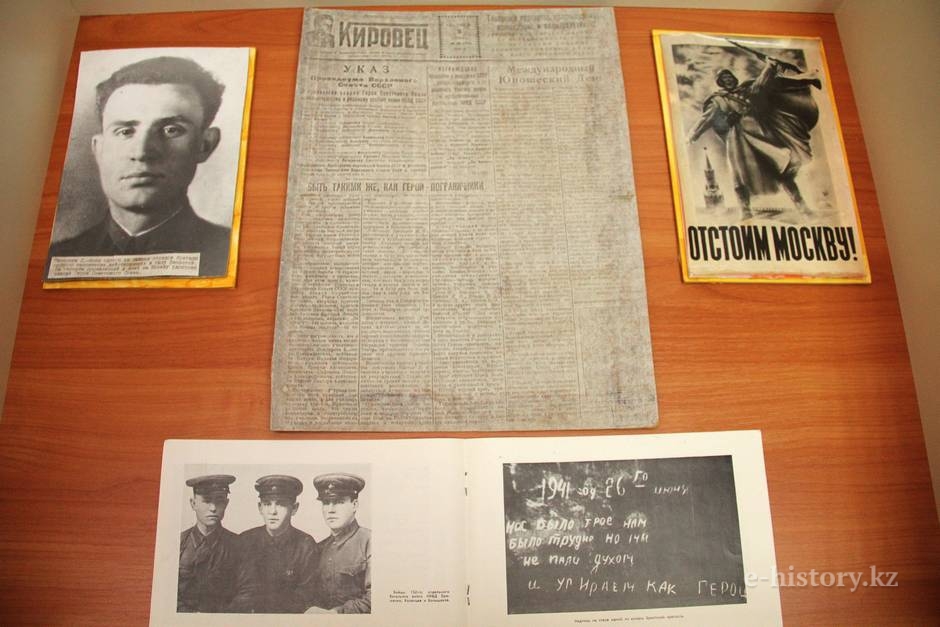 As we know, the NKVD troops were sent to the bloodiest battles. They defended Leningrad, fought at Moscow and Stalingrad, Kursk and Sevastopol. «Thus, the internal troops were sent to the most dangerous sections, although our task was the protection of the rear of the army from attacks and saboteurs», — colonel I. I. Grafkin, the Head of the Museum of the National Guard (formerly the Internal Troops of the Ministry of Internal Affairs of the RK), said. 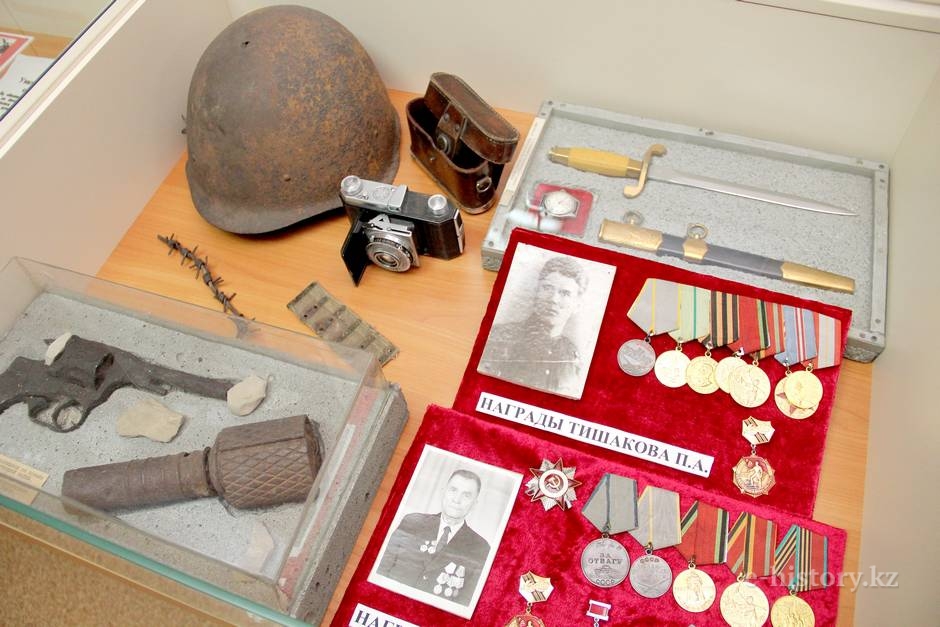 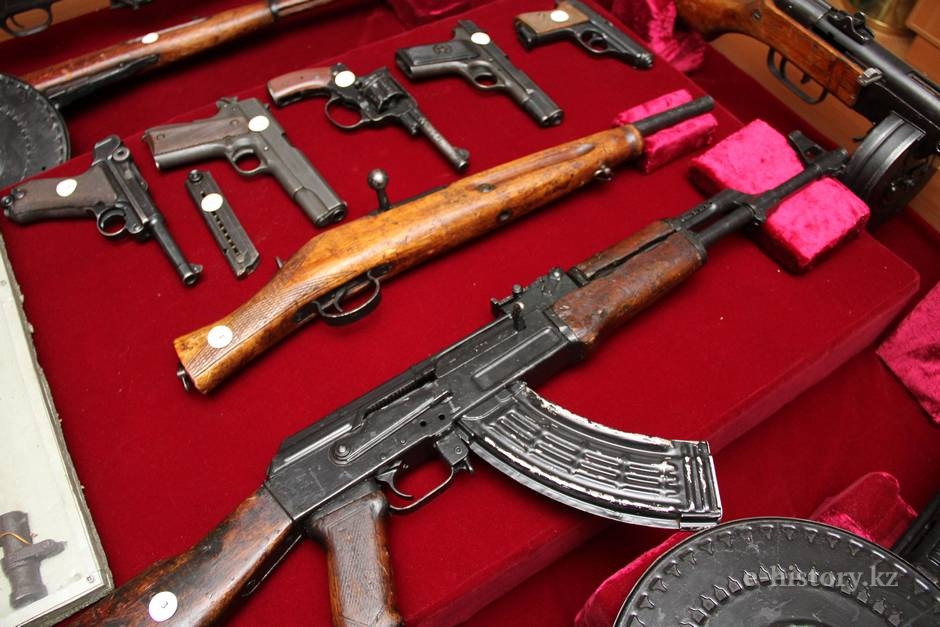 «I did not know that NKVD has such a nice military history — I told to Ivan Ivanovich — usually at the mention of NKVD people recall repressions of the 1930s».

Colonel explained that the black pages of the NKVD are not forgotten, but this story also contains misrepresented facts. He, like many military people, personally encountered with this phenomenon in the 1990s. When the country was falling apart, the police and army was discredited. «Insensibly at that time heroes and deeds went too far back into the past, people began saying that we are „rabbles and chasteners“. Apogee in CIS countries came in 1993, when the men in uniform were beaten in the streets, throw out of the buses» — retired colonel says.

90-s were the most difficult for Kazakhstan’s army. There was a formation of Internal Troops in country. The military lived in the hardest conditions including absence of money, heat in the barracks and sufficient food. In addition, our soldiers were sent to establish the order in Osh, Nagorno-Karabakh and Tajikistan. 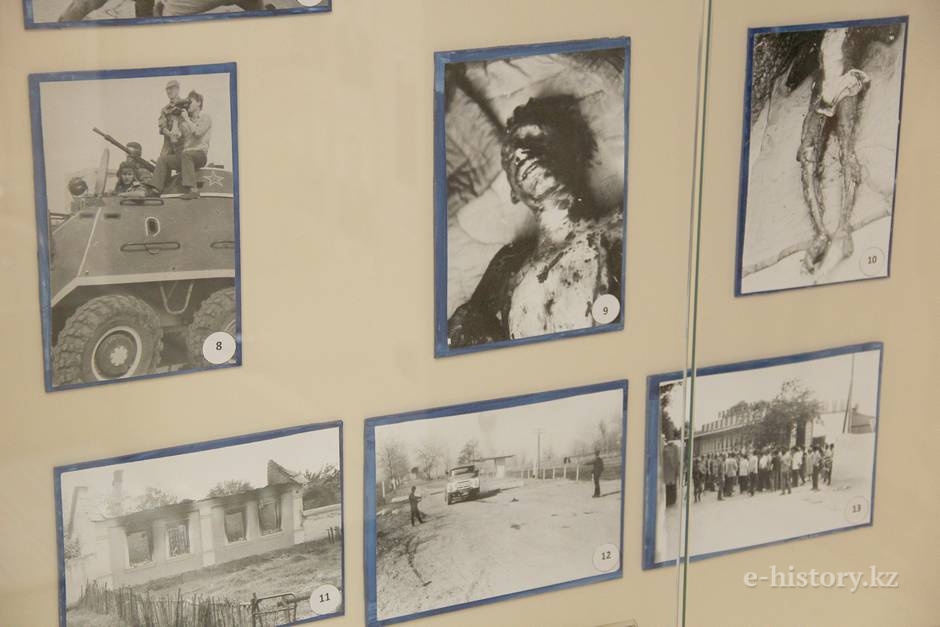 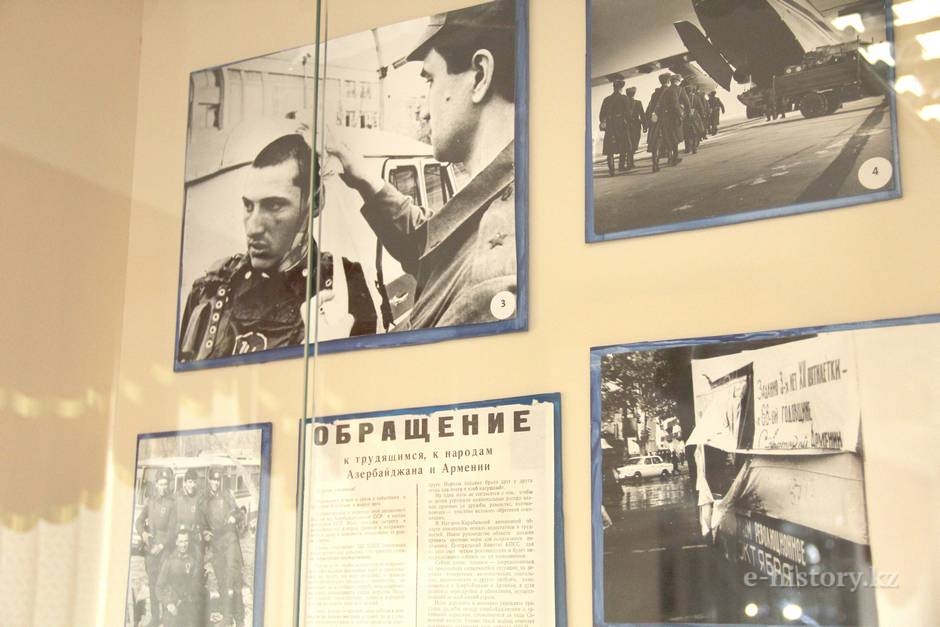 «When the earthquake happened in Spitak, internal forces also rendered assistance. In such critical cases, the main task is to protect state institutions because looters and gangsters begin to act, — Colonel Ivan talks, knowing everything about these terrible events. — Strategically important objects were guarded by one soldier; we did not have enough people. I had soldier who stood on guard the whole night without food and water. When the relief came, he had only three cartridges, and around two dozen corpses were around him. He guarded the branch of Sberbank».

Head of the museum could not ignore the events happened on April 7, 1995. Kazakhstan combined battalion of 100 men under the command of B. B. Dzhanasaev passed through the Pshihavr gorge in Tajikistan, where they were fired with machine guns and grenade launchers from mountains. In that unequal battle, 17 Kazakhstan people were killed trapped in the mountain heights. 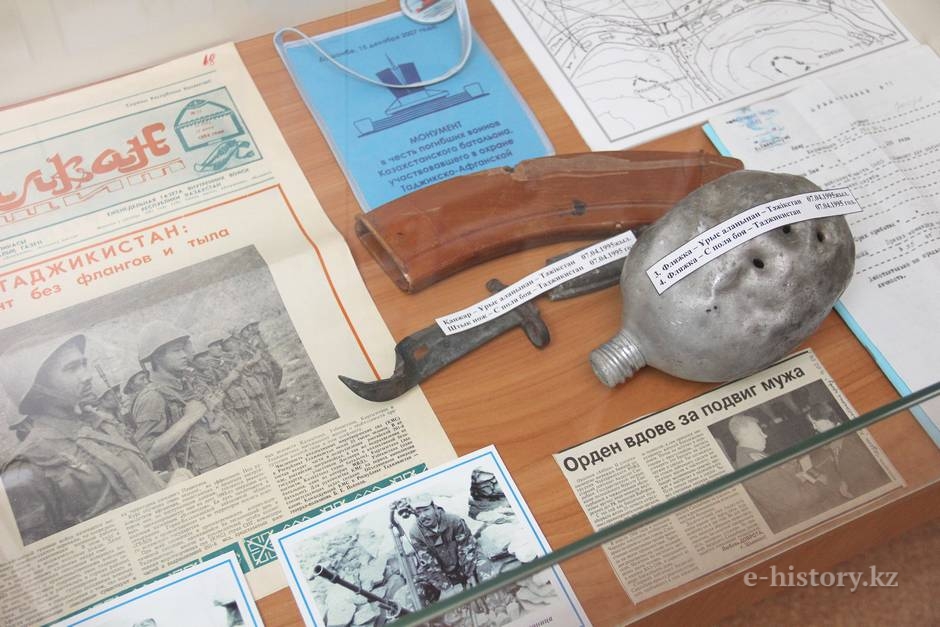 Owners of these objects are all dead

Museum of the Interior Troops of Kazakhstan is rich in history and exhibits; it is impossible to describe everything at once. Separate stand here is dedicated to one sub-unit. And there is a lot of information about each unit; every of them has its own heroes.

Several stands talk about the establishment of specialized military college of the Internal Troops, which Kazakhstan required after the collapse of the USSR. In 1991 the officers left for republics and the country sharply faced the lack of officers. The problem of preparation of Kazakhstan officers rose sharply. Initially, students were trained in Tashkent, then there was an opportunity to study at the specifically opened faculty at Frontier College. And only in 1997 military school of the Internal Troops was opened in Petropavlovsk. It was opened by Commander-in-ChiefN. A. Nazarbayev. Today it is the Military Institute of the MIA of the RK. 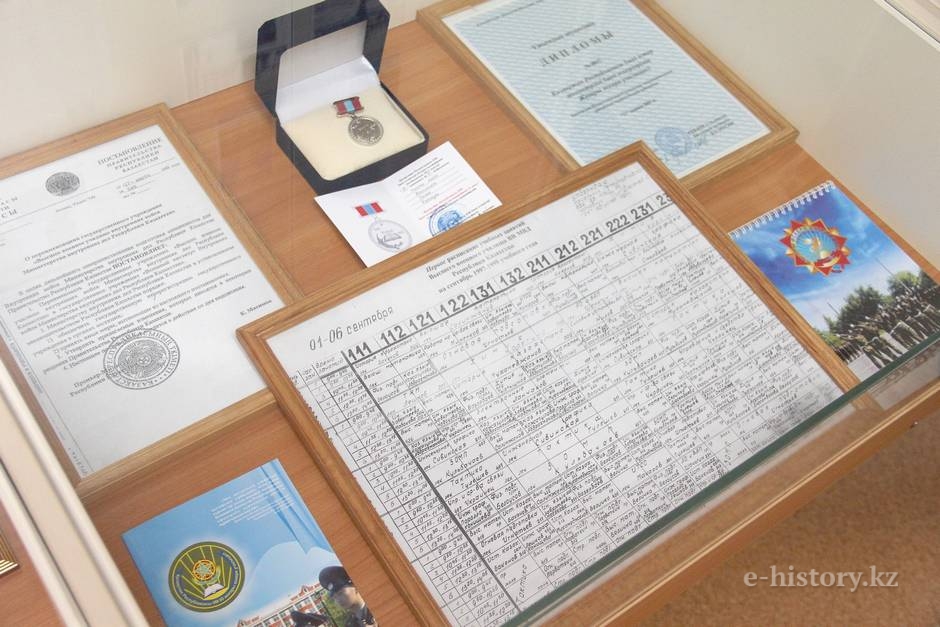 Copy of the time table of the first enrollment of cadets 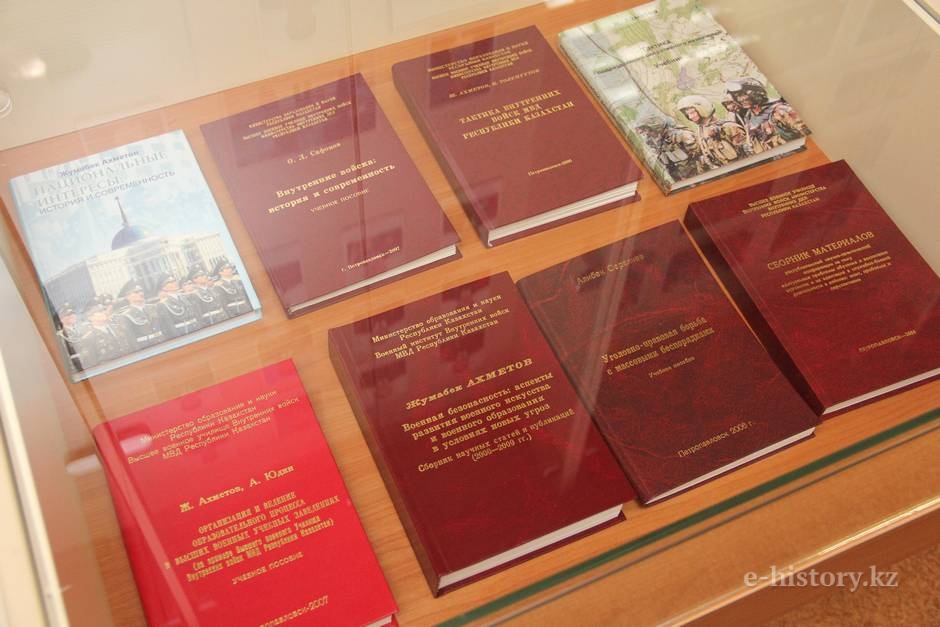 Tutorials of the Military Institute

Perhaps, today everybody in Kazakhstan knows about the heroism of Yerbol Otarbaeva. In 2011, a young guy, fixed period soldiers, served on the far steppe tower. Being wounded, bleeding, he did not let the machine out of his hands and shot attacked Aktau jail-breakers. Twenty criminals were against him alone. In the darkness the soldier continued the battle until the arrival of reserve group. He was awarded the medal for bravery and dedication in the performance of his military duty by N. A. Nazarbayev. 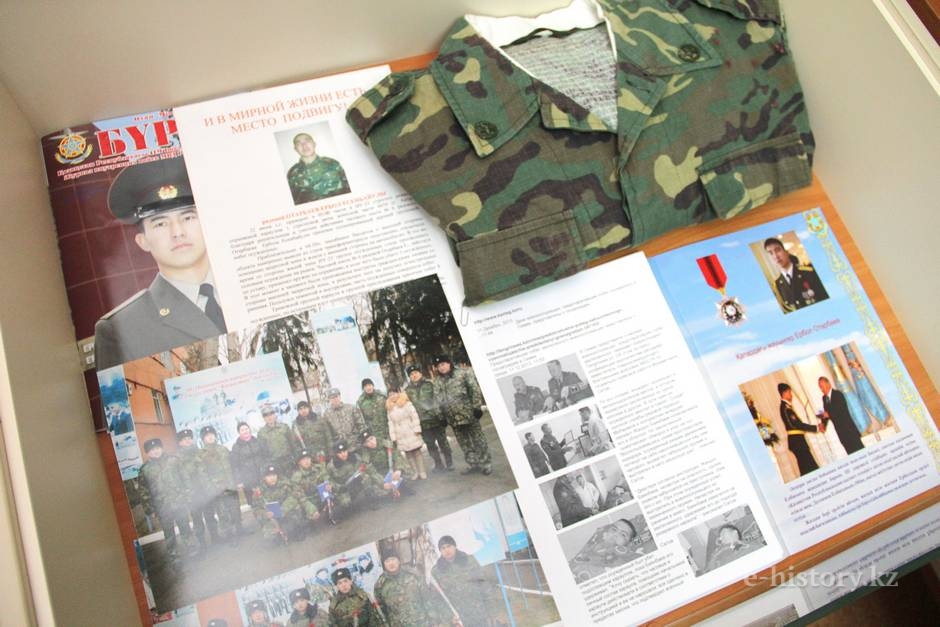 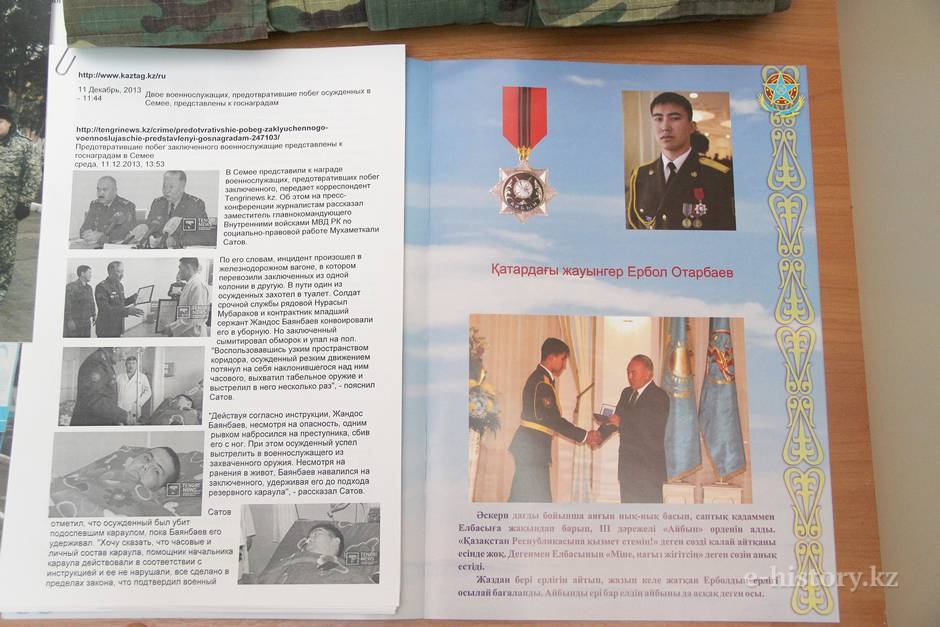 «He is from a village, very modest. He was brought to the award ceremony, although he was not fully recovered from wounds. I showed him this stand in our museum and said, „You’re a hero!“. He felt bad, was so excited, and when he came to his senses, replied: „I am not a hero; everyone from our company would do the same“. Now he study at the Military Institute, he is a squad leader» — I. I. Grafkin talks about the hero. 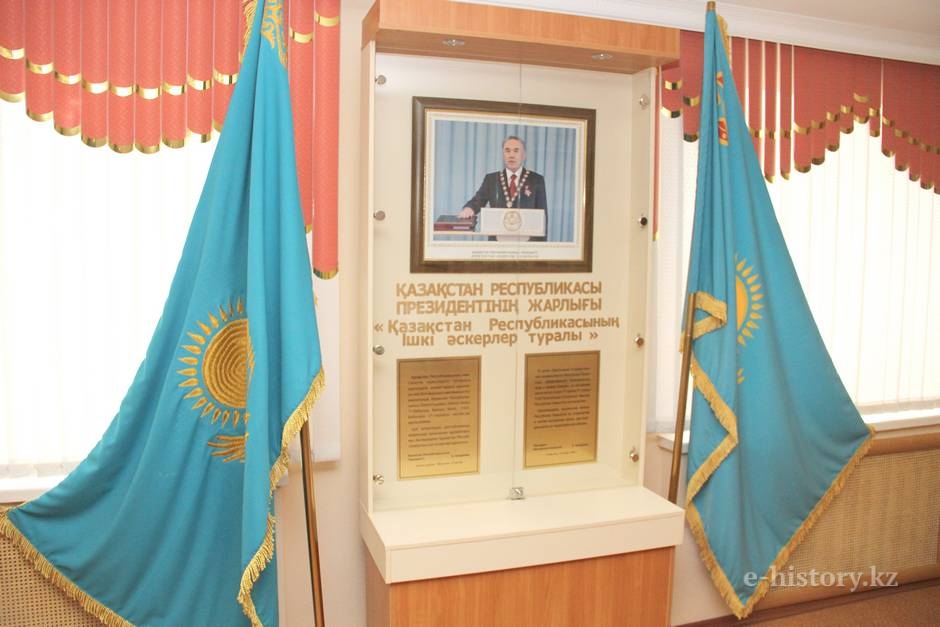 The Museum of Internal Troops of the RK was opened in Astana in 2007. There are some plans on expansion of exposition, as the museum has archival materials and documents and the history goes on. Several months ago, Interior Troops of the MIA of the RK were converted into the National Guard of the RK.

However, despite the changing of the troops name with the course of time, the main point of military service remains the same — to serve honestly, steadily overcome all the hardships, bravely defend homeland and be a worthy example for youth.