Kazakh who won hearts of France and Chechnya 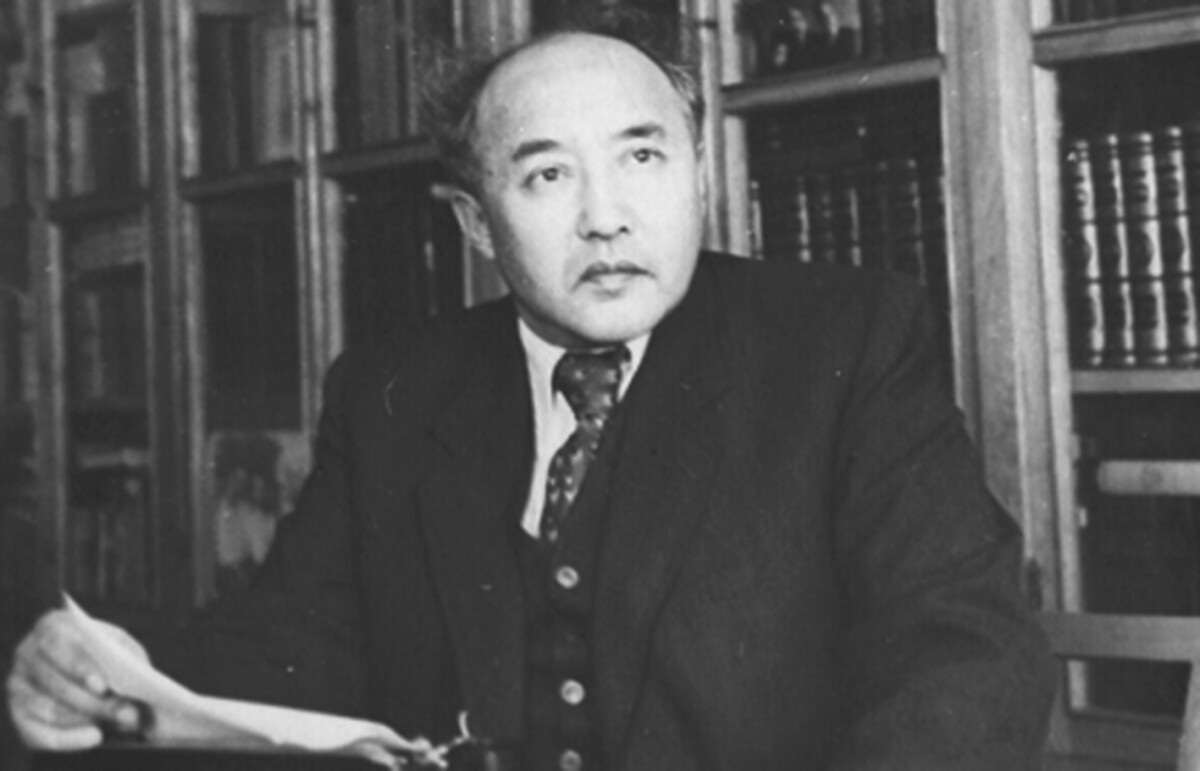 20 years ago, June 2 - 6, 1997 at UNESCO in France were held Days of Mukhtar Auezov dedicated to the 100th anniversary of the birth of the classic of Kazakh literature

The peak of Auezov's creative skill was the novel-epic "The Way of Abai". The work shows the way of the formation of Abai's personality in close relationship with the fate of the Kazakh people, shown in all its diversity and depth. 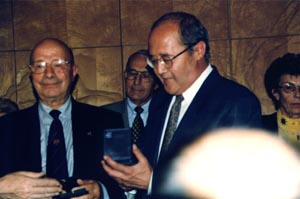 Awarding of Murat Auezov with a commemorative medal in the days of the celebration of the 100th anniversary of M. Auezov in France. June, 1997

With the attainment of independence, Kazakhstan was able to present to the world its best representatives. Thanks to cooperation with UNESCO in June 1997, Mukhtar Auezov's Days dedicated to the 100th anniversary of the birth of the classic of Kazakh literature were held in France.

A bright presentation of the versatile culture of the people of Kazakhstan and its creative youth was the holding of a creative evening in the main concert hall of Paris – Pleyel, opened by E. Crespo-Toral, the Director-General of the Culture Sector of UNESCO and D. Kasseinov, the Director of the Department of Culture; concerts of the chamber orchestra with the participation of Aiman Musakhodzhayeva, performers of folklore music and dances. An international colloquium dedicated to the works of M. Auezov, an exhibition of books, jewelry and applied art objects, a viewing of the films "About Mukhtar Auezov" and "The Beauty in Mourning" at UNESCO's cinema hall, was presented at UNESCO Headquarters. O. Rymzhanov and representatives of the Union of Cinematographers of the Republic of Kazakhstan participated in this event.

The Colloquium, highly appreciated by foreign participants, was opened by the Deputy Prime Minister of Kazakhstan I. Tasmagambetov and the Director-General of UNESCO, F. Major. In the course of his speech I. Tasmagambetov noted that the celebration of the 100th anniversary of M. Auezov under the auspices of UNESCO demonstrates that the work of the outstanding Kazakh writer has become an integral part of the treasury of world literature. In turn, F. Major emphasized the importance of M. Auezov in the development of Kazakh literature, highlighting his role as a mentor for young writers. The speeches and the scientific discussion that took place made it possible to highlight the peculiarities of Kazakh literature and the originality of the creative perception of the world by the steppe man in a new light.

During the meeting of Deputy Prime Minister I. Tasmagambetov with General Director F. Major, which was held in a warm friendly atmosphere, the personal message of President N.A. Nazarbayev was handed over. F. Mayor highly appreciated the role of the President of the Republic of Kazakhstan in the transitional economic period of the Republic and the friendly character of personal relationships that developed between them. The discussion of practical actions by UNESCO on the rehabilitation of the zones of ecological disasters in the Semipalatinsk and Aral regions was continued within the framework of the meeting with the Deputy Director General A. Badran. At the meeting with the Director-General of the UNESCO Culture Sector, E. Crespo-Toral, with great understanding and support, the thesis of the need to preserve the unique spiritual culture of nomads, which is an inseparable part of the common cultural heritage of mankind, was received. In addition, E. Crespo-Toral expressed a proposal to hold in 1998 in UNESCO an exposition of objects of applied art, indicating a high level of ancient craftsmanship, which could be accompanied by a cycle of lectures for specialists and demonstration of traditional musical creativity of Kazakhs. 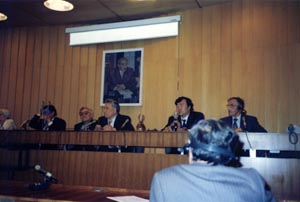 International Colloquium in UNESCO, dedicated to the 100th anniversary of M. Auezov. Paris, 1997

Also, the celebration of the 100th anniversary of Mukhtar Auezov took place in the Chechen Republic of Ichkeria, where Murat Auezov, Diar Kunayev, the son and grandson of the Kazakh writer, were invited.

Already on the border, the voice of the people's ashug of Chechnya, Valid Dagayev, carried the native motifs of Kazakh songs along the mountain passes. Everywhere there was a desire to demonstrate the commonality of our spirituality, the unity of the roots, which feed the most intimate feelings.

In the building of a dilapidated drama theater, the pediment of which was decorated with a welcome poster in the Kazakh language: "Kosh keldinizder, Kazakh Bauyrlar!", a solemn meeting was held.

It is symbolic that the capital, turned into ruins, straightened its proud camp, paying tribute to one of the best representatives of the Kazakh people, who 73 years ago hospitably received deported Chechens on his land. The Kazakhs shared their last with them and thereby helped the Chechens survive as nation.

This thought permeated literally every speech at the evening, the atmosphere of which was even more warmed by the poem of the Kazakh poet Rafael Niyazbek "Ichkeria" about the events of the Russian-Chechen war. Deputy Prime Minister, Minister of Culture of Ichkeria Ahmed Zakayev as a sign of special respect for Mukhtar Auezov presented Murat Auezov and Diar Kunayev with mountain papakha of dzhigits (tall Caucasian fur hat). Born and raised in Karaganda region, artist Aindi Asuhanov presented two paintings with landscapes of the mountainous Caucasus to the International Fund of Mukhtar Auezov.

The meeting with President Aslan Maskhadov, held the next day, began with memories. Brought back to memory his childhood spent in the Karaganda region, Maskhadov told about the land that gave him life. He feels filial piety to Kazakhstan. Colorfully inlaid dagger - a gift of the President of the Chechen Republic of Ichkeria - took an honorable place in the exposition of the Auezov House Museum in Almaty.

In turn, the library of Maskhadov was enlarged with the book of the great writer "Hard Times", which describes the events of the people's liberation struggle of the Kazakh people at the beginning of the 20th century.