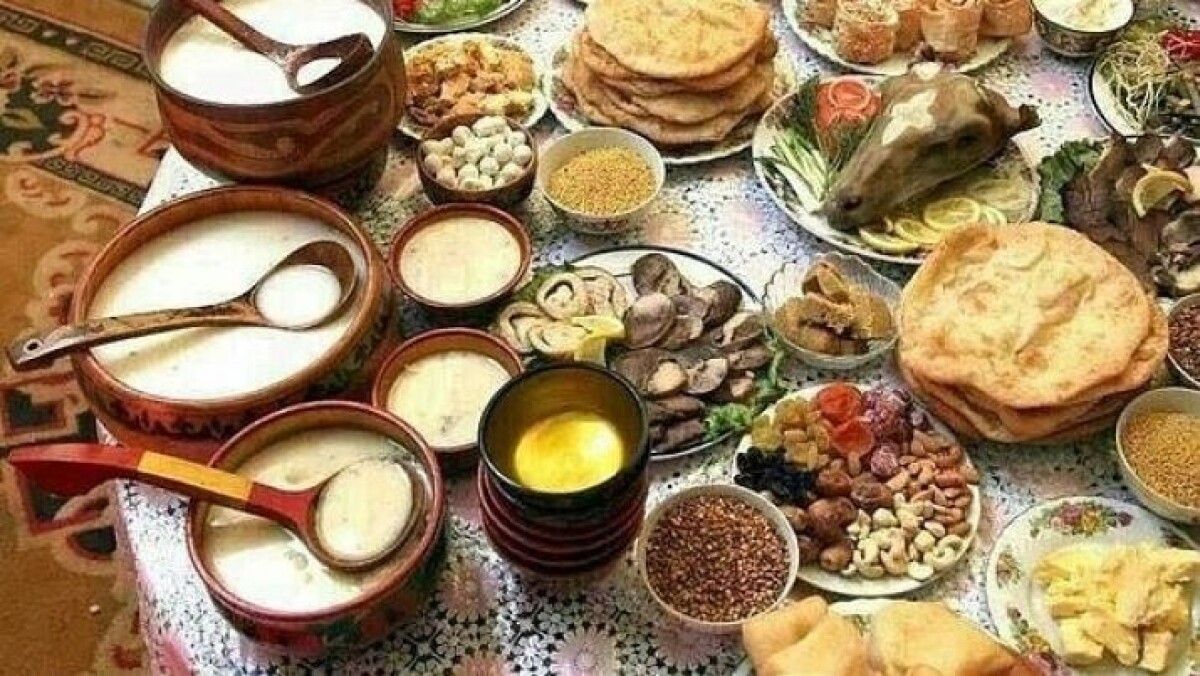 Table manners etiquette is of great importance among Kazakhs

Most often guests at the table are not forced to wait long. There are generally accepted rules of conduct at mealtime. Before proceeding with the meal, the eldest of sitting at dastarkhan says traditional blessing ("bata") with wishes. To sustain full meal ceremony in the traditional spirit, you should wash your hands before and after eating. Very often in urban areas, at least in the countryside, guests can be offered cutlery with a set of plates, spoons, forks and knives.

The very nature of the meal, its variety and plenty provide the owners once again to demonstrate their generosity and deference. As a rule, now in contrast to previous years, guest meal consists of three parts. It includes both traditional and high-quality new products, borrowed from other peoples. 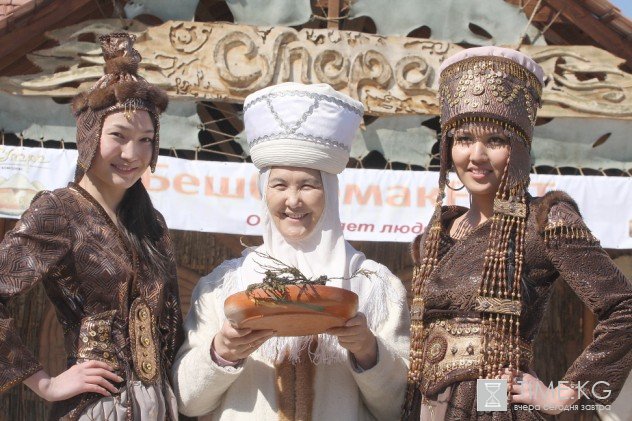 First, as in the European ethnic groups includes cold dishes: different combination of salads, meat, poultry, fish, factory sausage, cheese, which certainly complemented the traditional dishes of horse meat - "kazy", "karta" and "zhaya" and also all kinds of refreshing (juices, drinks) and alcoholic beverages. Drinking a large quantity of alcohol, in contrast to previous years, is differentiated. It served a little in the south, and where the oralmans, who profess Islam, live. The older generation in contrast to the young or middle is indifferent to alcohol now.

The second and mandatory part of the meal - a traditional "et beru" (besbarmak) and the third - the tea party. The composition of the latter includes a variety of fruits, sweets (candy, cookies, raisins, dried apricots, nuts, homemade jam, and so on), cakes, pastries and "baursaks" (fried in boiling oil unfermented dough) that acquiring ritual semantics, are willingly taken by female guests after a table. 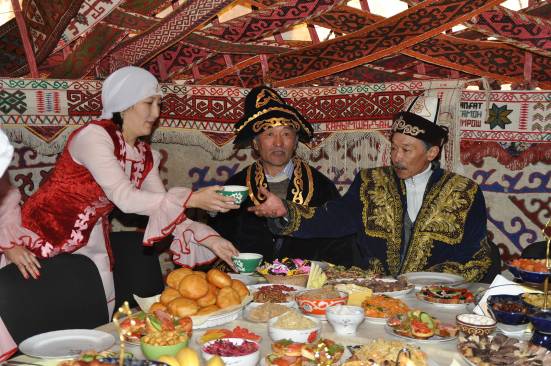 It is assumed that at a dinner party or a supper offered assortment of dishes should be varied and plentiful, and this despite the fact that definitely need to serve two or three main traditional meat dishes, otherwise those who present may think that the owners of the house are very economical. Hence - a common practice - when taking guests to prepare and put on dastarkhan as much all kinds of food and beverages, often in an amount that is several times more than need to once again show the guests their generosity and magnanimity. Therefore, the guests are ready to accept such a generous amount of the meal when after the first meal they will certainly be offered the second, third, fourth, and at the same time they should not give up another.

According to national traditions, the persistent request of the guests to try as many dishes offered is an integral responsibility of each host. Invited are trying as much as possible to please a gracious host - to eat and drink more than they would like. Naturally, the most responsible and prestigious is the second main part of the meal - serving prestigious dishes "et" (besbarmak) - boiled meat with dough and broth ( "sorpa"). 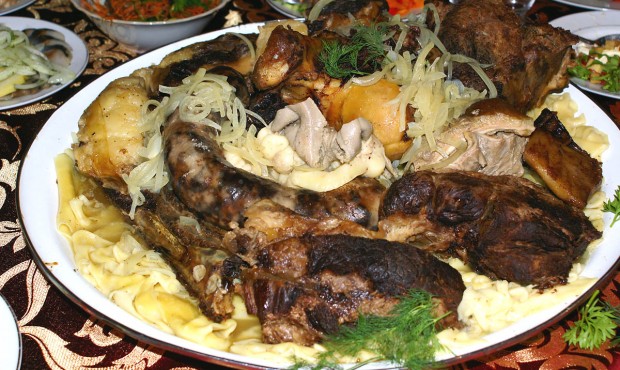 This is largely due to the tightness of this national dish a certain symbolism, ritual of meat dress and cooked meat of various parts of the animal. In the work "The traditional culture of Kazakhs life support" of N.Alimbay, M.Mukanova, Kh.Argynbaeva, it is said "the dress meat, in fact, is a metaphorical designation of conduct and status of tablemates. There is a sort of thickening space of social relations in space of treats rite.

"There are four kinds of meat dishes in Kazakh: main, emeritus, medium and small. In the first two cases, the guests put a ram's head (“bass”) and meat from the pelvic bone ("zhanbas"), in the second - meat with shin-bone ("asyk zhіlіk"), tibia ("ortan zhіlіk"), at least "zhanbas", in the third - the remaining pieces of meat. The head is usually given to the distinguished or elder age guest ("aksakal").

According to the beliefs of the Kazakhs, it symbolizes the highest degree of respect, since according to popular tradition important of all is the head. Aksakal should endow with a certain sense those who present its parts or taste and share with others ("bas kydyrtu"). Describing the criteria to establish the prestige of the guest can be seen offset in recent decades the parameters of age in the social sphere.

In this regard, often the first to get a sheep's head are not elders, but persons who hold a leading position. The remaining parts of "zhіlіk" are presented in pieces, respectively, according to the status of the presented. This ritual is common to all the regions of Kazakhstan.

Such a method of meat dress is found in other, formerly nomadic peoples: Kyrgyzs, Turkmen, Altai, Kalmyks, Mongols, etc. For the most part, like the peoples of the republics of Central Asia, Near and Middle East, the Kazakhs prefer to eat meat by right hand, which however does not exclude the use of spoons and forks.

We should note that oralmans of the above regions cleave large pieces of meat with a right hand, at least using the knife. The owner never stops meal first, allowing the guests to sate enough. After the meal, a meat dish with uneaten food is taken out of the room by daughter-in-law or hostess.

After the traditional meal "et" the older age guest is asked to give a blessing ("as kaytaru"). This is followed by a short break, the so-called intermission. During this time, they clear the dastarkhan, re-set and serve the table with all the attributes - sweets, cakes, etc., to offer and then serve mandatory in such cases the Kazakh tea with milk.