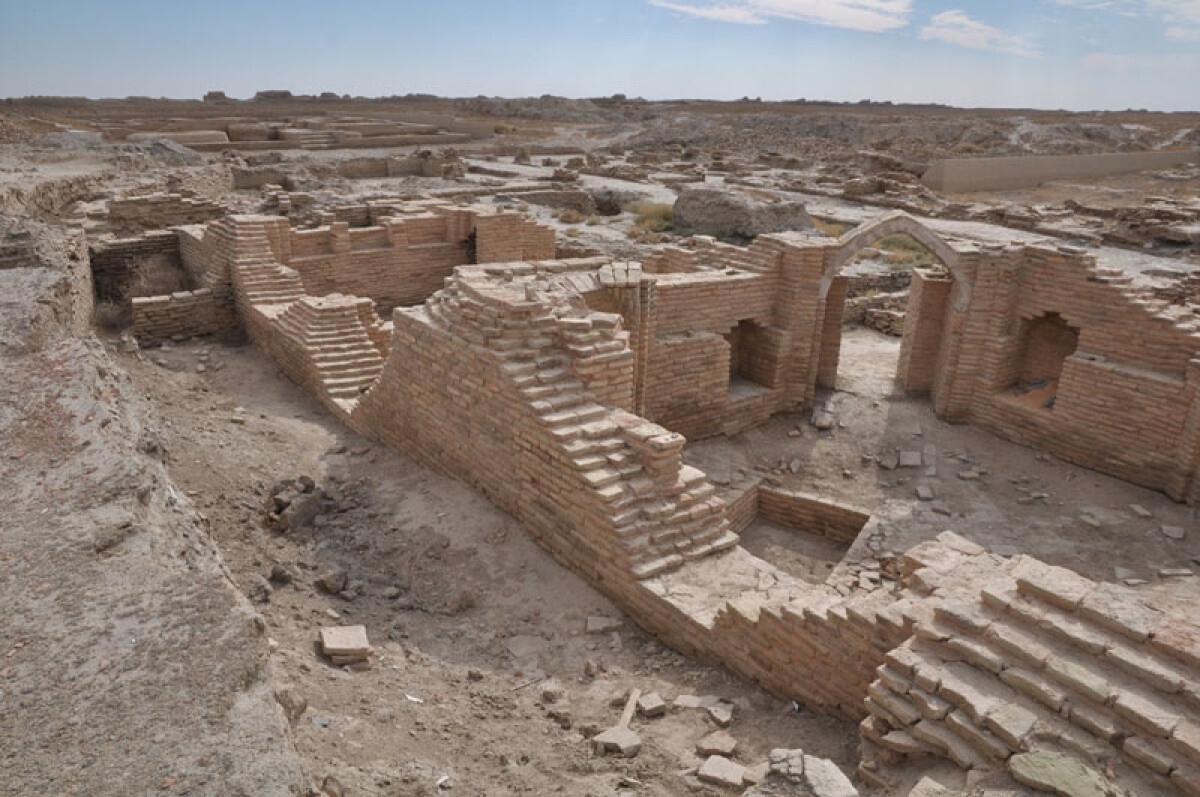 The material discloses the stratum of site of Sauran. Stratum shaft put in the central part of town showed that thickness of layer with the remains of dwelling constructions reaches here 4 m.

This layer consists of not less than four building horizons. By the character of glazed ceramics all this thickness of cultural layer with the remains of dwellings can be dated by the XV-XVII cc. lower, in the IX-X stage, on the depth 5 m, the typical Moslem burial in brick grave was cleaned out. In the region on of his scull was discovered the golden ear-ring of so called «Polovetsky» type. Such rings in the steppes of Eurasia are dated hopefully by the XIII—XIV cc.

There is a reason to describe in details the stratum of this shaft. Its initial square was 7x2 m, but on the level of earth the shaft had been reduced up to 2x2,5 m. It was situated on the hill of one of dwelling constructions in the place of crossing of main town streets in the middle of south part of the site.

The first (upper) building horizon has the depth almost 1,5 m. After the layer of humus in thickness 10 cm was the layer of broken of one construction made of row bricks, which occupied one and half stage (0,75 m) to the depth.

In the middle of the second stage the first floor of this building horizon was opened. Four more such floors with cover have been opened up to the low border of the third stage. All of them are referred to the first building horizon. In the northern part of shaft on the level of the second shaft was opened the fragment of square put by burnt brick. In the south part is the huge plane stone, obviously used as support for the wooden column. These upper floors are fixes along all square of excavation.

On the border of stages 2 and 3 the floor was cleaned out, covered by ganch infusion in thickness 1,5 cm, and also are found many bones of domestic animals in the layer of ash. The numerous fragments of ceramics have been found.

The glazed ceramics of the XVIII c. dominated in the first stage. They are fragments of bows, dishes and Kitchen dish - pots, cauldrons, jars. Glazed ceramics has dirty- white back ground with ornamentation, put by manganese. The motives of ornamentation

are different: geometrical and herbal; prolonged spirals, circles or zigzags and also I herbal ornaments of blue color. Ceramics of the stages 2 and 3 is of the same form and 1 color; here are seen already dark blue colors in painting. Bows and plates are ornamented 1 by black, dark blue and light-blue colors. The majority of ornaments are herbal; they I are put on to the white and blue background or are covered by light blue glaze. There is even the fragment of covering plate by majolica painting, more looking as the plates! of the mausoleum of Khodja Akhmed Vassawi. Taking into account the ceramics, these! layers are referred to the late XVI-XVII cc. In the third is found the head of glazes toy! horse. Just the same fragment was found in Otrar in the layer of the XVI c.

In the 4 and 5 stages were opened four floors of one building horizon. In fifth stage also was cleaned the floor with ganch covering. The abstractions and thick layers of ash with the parts of soot are going one after another. Fragments of walls were not discovered.

Ceramics is presented by the fragments of kitchen dish; the quantity of bowl fragments with herbal ornament of blue color covered by the glaze of light blue shade increased. There is also a lot of ceramics of white-potash covering with manganese painting of black color with herbal ornament. Almost all ceramics has the painting on inner surface. The analogous ceramics was also found during excavations of Turkestan in building horizons of the XVI c.

In the VI—VII stages three consequent floors and layers of obstructions of raw brick walls were opened. In the VII stage the layers of animal bones in thickness 15 cm and also the layers of soot and pebbles of the same thickness were found. But these layers lay lower and with strong decline to the southern part of excavation. It tells that the premise was used for the waste earlier.

Ceramins of so called «Timurid style» such as while background ceramics with different shades cobalt painting is dominated in the low layers. Herbal motives are dominated. Plates, dishes and bowls are decorated by the branches and petals of different herbs. In the lowest layers are seen ceramics covered by green, dark-green and brown glaze and also fragments of bowls with red-brown background with double line along the circle, dots and petals of yellow color. But there is also another variant: brown background with white color ornament and yellow glaze covering. 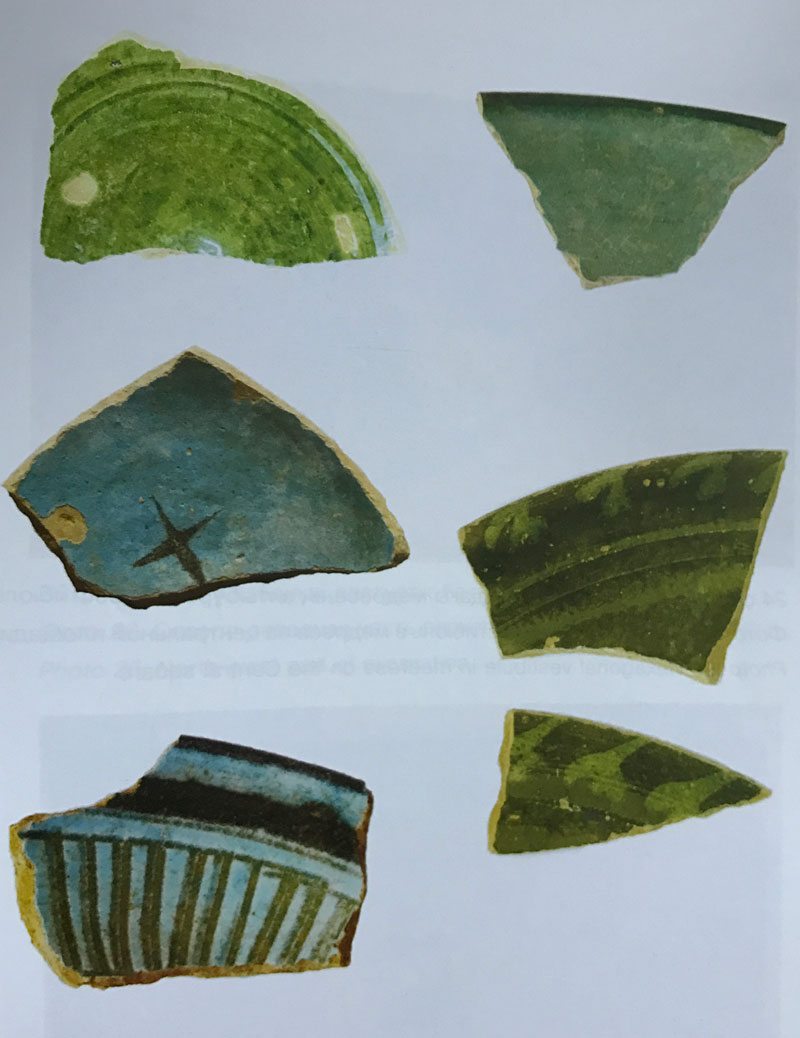 By the ceramics, the upper layers of this horizon can be referred to the XV c., and the lower - to the second half of the XIV c. Ceramics of the same colors was also found in the same layers in the towns Otrar and Turkestan.

The corner of some construction looking like the edge of sufa with stone stand for wooden column which usually stand in the middle of premises was discovered of the level of the VIII stage in the south-east corner. The edge of sufa is strengthened by the burnt brick with layer in three rows in the corner behind the brick laying the triangle part of sufa was opened, covered by thick layer of ganch covering. The bricks are of standard size - 25x25x5 cm near the stone stand is laying the row of broken bricks, covered by the layer of ash and soot.

Red-brown shades with painting of yellow color and also light - yellow - green with painting by dark-brown color dominate in the ceramics. The interesting is the fragment of bowl, the inner surface of which is covered by dark-red glaze. Inner round surface is divided Christ shapely by triple line and four formed sections are filled by «comers» of yellow color. The same bowl was found in the layer of the XIV c in Otrar. Light green glaze is often found in the layers of the XIV c of Yasy-Kultobe and Shoitobe. So, this fourth building horizon can be dated by the XIV century.

Under further deepening of shaft right on the adjoin on the VIII and IX stages appeared the laying of walls made of raw brick, situated perpendicular to the edge of sufa. The walls were formed in the length of brick, in half-brick thickness. Likeness of these lying with burial construction was obvious. The same one-camera vault of the type «cista» was opened in the hall «Kazandyk» of Khodja Akhmed Yassawi khanaki in 1997. On the same level (IX stage) were discovered the remains of buried. They laid on the back directed by the hand to the north-west, by the face - to the south-west, to the side of Мекка. Hands are crossed on the stomach, the left leg is straightened, and the right is slightly turned in the knee. In the place of scull of the buried # 1 the golden earring with two pearl beads laid. Ear-ring is in a form of question sign with a pair of pearls, put on the bar, going down vertically from the closed circle shaped ear. The pearls are fixed by thin wire, the edge of which is waved by some rows of rods above the pearls. The same form ear-rings with pearls were found on the medieval site Shehrlik (Tashauz region, Turkmenia). N.N.Vakturskaya in her publication is considering that not only gold, but bronze ear-rings in a form of question sign and reminds about the analogous findings of copper, silver and gold in the burial mounds of the late nomads of Golden Horde time. She also noted the places of findings of the identical ear-rings in the grave mound at the village Molchanovka, on the site Saray-Berke and others. Dating of all these findings is fluctuating from the XIII to the XV c. The author referring the works of other researcher connects these findings with the kipchaks (polovtsy) of the XII-XIII cc.

Shehrlik ear-rings are found on the surface and are not connected with the dating cultural layer, and our ear-ring is connected closely with the burial of Moslem type and this burial is covered by the cultural layer of the XIV c. from above. It can be concluded that ear-ring from Sauran burial is referred also to the XIII c and it marks the last period of functioning of necropolis on this place, after which it began to build by the town constructions.

In the second burial the corpse’s laying is analogous to the first, but without any decorations. So, the building horizons of Sauran can be dated by the XIV—XVIII cc. and to recognize that town appeared on the place of earlier cemetery, the graves of which appeared covered by the first dwelling town constructions. It is necessary to note that the analogous situation is fixed in the low layers of the territory around the mausoleum-khanaki of Khodja Akhmed Yassawi in Turkestan town. Here is also the most low building horizon of the XIV c. crosses the layer of ancient necropolis.