Home News Heritage ‘CIVILIZATION OF THE GREAT STEPPE’: FROM THE HISTORY OF KAZAKH WEAPONS

‘CIVILIZATION OF THE GREAT STEPPE’: FROM THE HISTORY OF KAZAKH WEAPONS

A weapon is a feature of the culture, the art of war of any nation. The system of the Kazakh weapons is an indicator of the long history of civilization of our people.

A brief history of Kazakh weapons

The history of the traditional Kazakh weapons goes deep into the past. If the history of origin and use of weapons arose very early, the weapons of the ancient people who inhabited the Great Steppe, were formed in the first Millennium BC.

A variety of sources, archaeological excavations and many other materials show the high level of military skill, military art of Saka tribes who are considered to be ancestors of the Kazakh people. Kazakh weapons researcher K.Akhmetzhan mentioned that Sakas’ private military armour complex includes various types of offensive and defensive weapons. In subsequent periods, the weapons of the nomads were varied due to the use of different metals. The art of making weapons of the Huns, Sarmatians, Kangyuis, Turks, Kimaks, Kipchaks had undergone several periods of development and made an enormous contribution to mankind civilization. 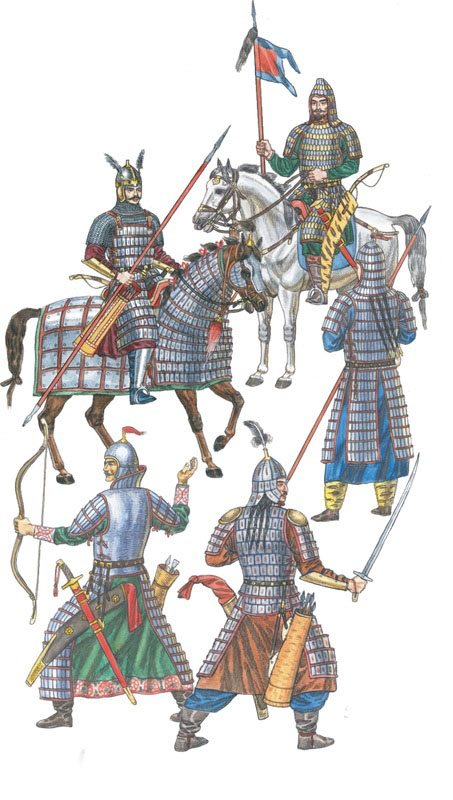 The meaning of the word karu-zharak (weapon)

The fact that the word ‘karu-zharak’ comes from the word ‘karu’, the scholars explain it this way: the word ‘karu’ in the Kazakh language, derived from the primary word ‘kar’ meaning ‘kol’ (hand), gives the notion of the tool, intended for use by hand. The word ‘zharak’ is considered as synonymous of the word ‘karu’, however, it has a very different meaning: it sounds like ‘iaryk’ in the original, this word in M. Kashgari’s dictionary is described as the common name of iron chain mail, shields for defense. Based on this definition, we can conclude: it is appropriate to divide military weapons of Kazakh warriors into two categories and call offensive weapons ‘karu’ and defensive tools ‘zharak’. Thus, if you combine these two names, then correlative word ‘karu-zharak’ turns into a common name-term denoting the whole complex of military weapons. 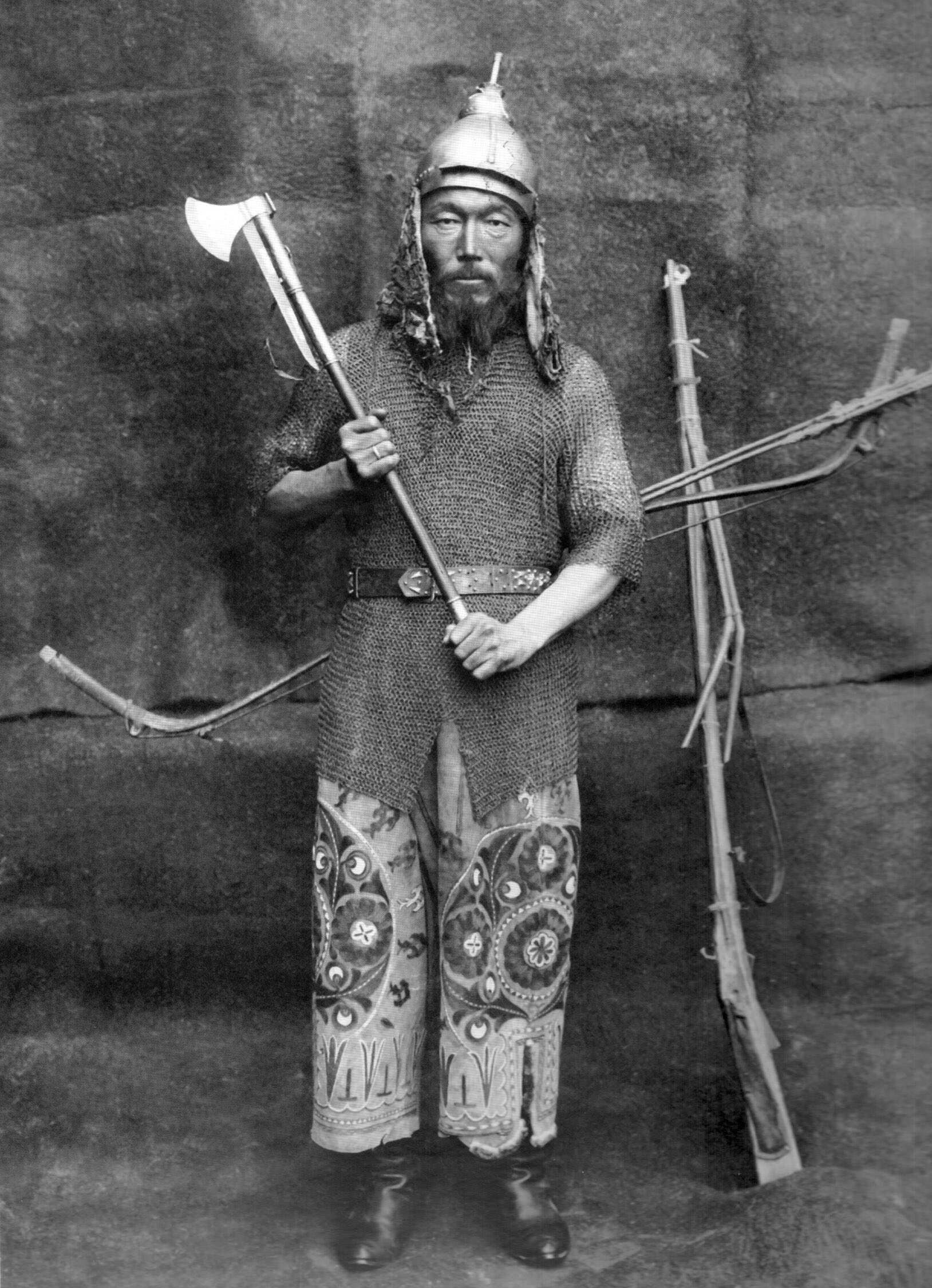 There is a Kazakh proverb: ‘Er karuy – bes karu’, which gives the meaning ‘A warrior has five types of weapons’. This division is associated with a characteristic for each type of weapon in a special way of defeat, so the ‘warrior’s weapon’ (‘er karuy’) is divided into: missile, bladed, cutting, thrusting and strike ones. Each type has several varieties that can interchange at combat use harmlessly for a warrior.

Missile weapons: quiver, battle bow ‘zhak’. The bow has two functional parts: adyrna and a bowstring. Adyrna is made of flexible bone or wood. Stretched rope was called a bowstring, where an arrow was imposed. There are several types of bows, based on the method and material of production. 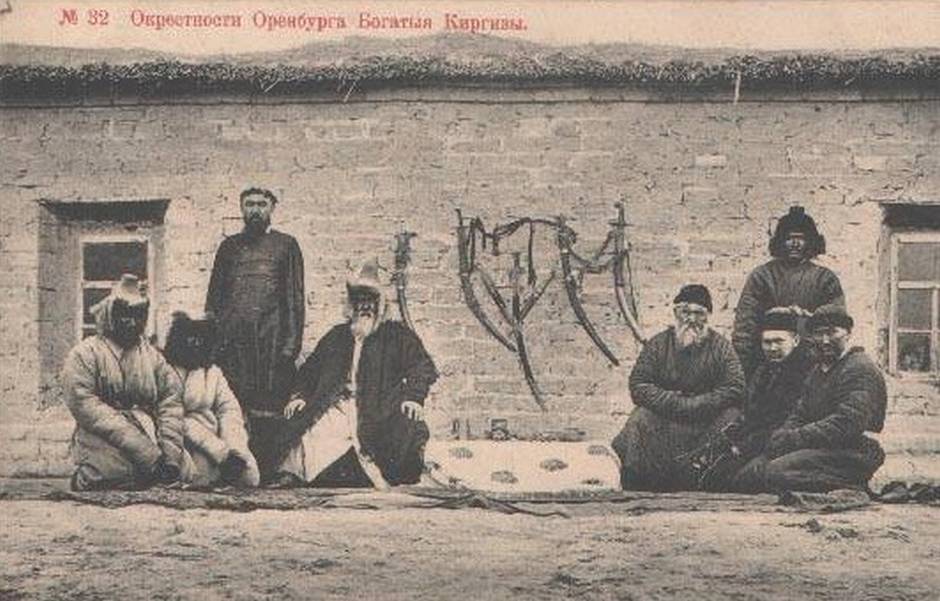 Bladed weapons: straight sword – ‘semser’, curve saber – ‘kylysh’ and Kazakh saber – ‘sapy’. Kazakhs had several types of swords: ‘narkesken’ – with a strongly curved blade; ‘zulfukar’ – with two-forked balde; ‘aldaspan’ – big, heavy sword with small extension at the tip, designed to increase the stroke heaviness. A sheath for a sword, sabers were called ‘kynap’. Some scabbards were covered with metal.

Kazakh people had two types of thrusting weapons: ‘naiza’ - a spear with a wide tip and ‘sungi’ – a long peak with thin faceted tip, intended to defeat the enemy in armour. The Turkic warriors attached different kinds of identifying military badges on the spear and the peak: horsetail, banner, flags, and badgers. The banner was a common military sign, horsetail – commander’s attribute, colorful flags served as identification marks of the military units, batyrs had brushes made of horsehair or silk cables. 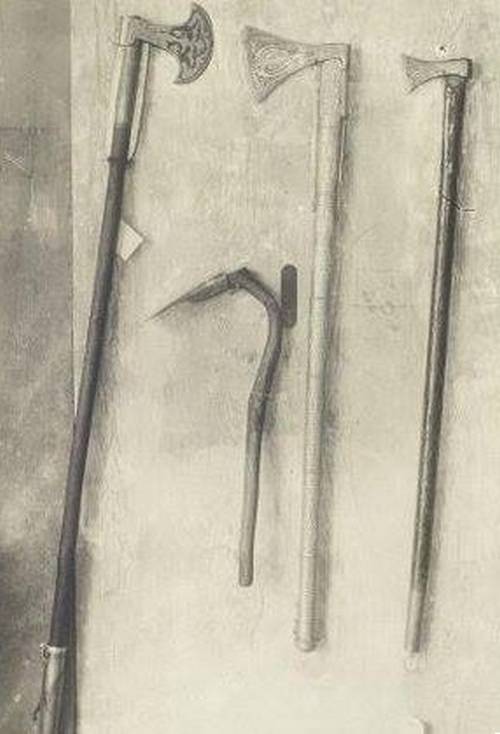 Traditionally, Kazakhs used four main types of the cutting weapons, differ by the character of hitting and form. The battle-axe ‘balta’ with a blade of medium width was used for the slashing blow. Slashing and cutting strokes were hit with the axe ‘aibalta’ with crescent-shaped and wide blade. ‘Shakan’ (ax hammer) had a narrow wedge-shaped blade and was used for splitting attacks. But soldiers often used a kind of battle axe – polusekira, where the properties of ax, hafted ax and ax hammer were combined.

Shokpar is a weapon made from one piece of wood in the form of heavy club with a thickening on one side, cast in metal or studded with spiky thorns. Strike weapons include: heavy club ‘kursi’ with a separately made of metal and head mounted on the handle, flanged mace– ‘buzdygan’, which metal heads had a few thin edges (feather), and finally, flail ‘bosmoiyn’, the head of which – kettle bell was made of wood and stone (or cast from metal) and connected with a handle in a flexible way – with straps or chain.

The magic function of the weapon 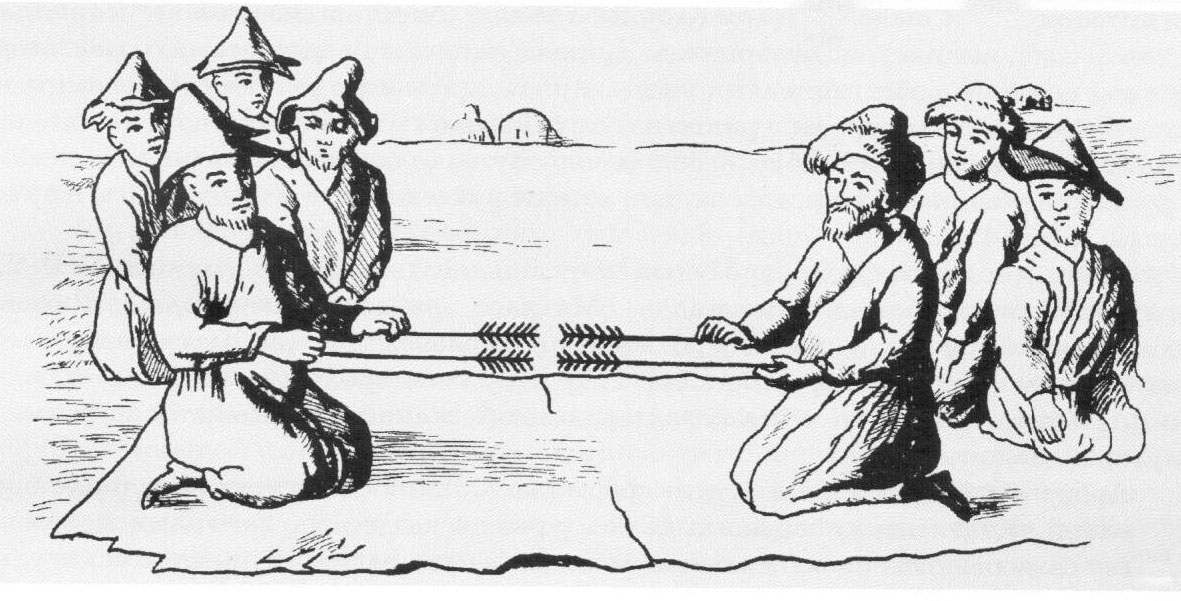 The weapon has a unique function in civilian life. The arrow with horsehair was used in the tradition of the wedding ceremony as a ritual tool. The man, who was going to marry, shot from a bow and the tent was raised in the place, where the arrow hit. In the XIX century, the Kazakh military weapons was a part of the bride’s dowry as a valuable thing – ‘zhasau’ and the wedding gift for the bride – ‘ransom for the bride’. Archaeological excavations prove that the Kazakhs along with the dead warrior buried his gun. Transfer of weapons to each other, dipping hands in the blood was assessed as ‘oath on the sword’. The weapon was considered a living form that has magical power among the ancient customs.