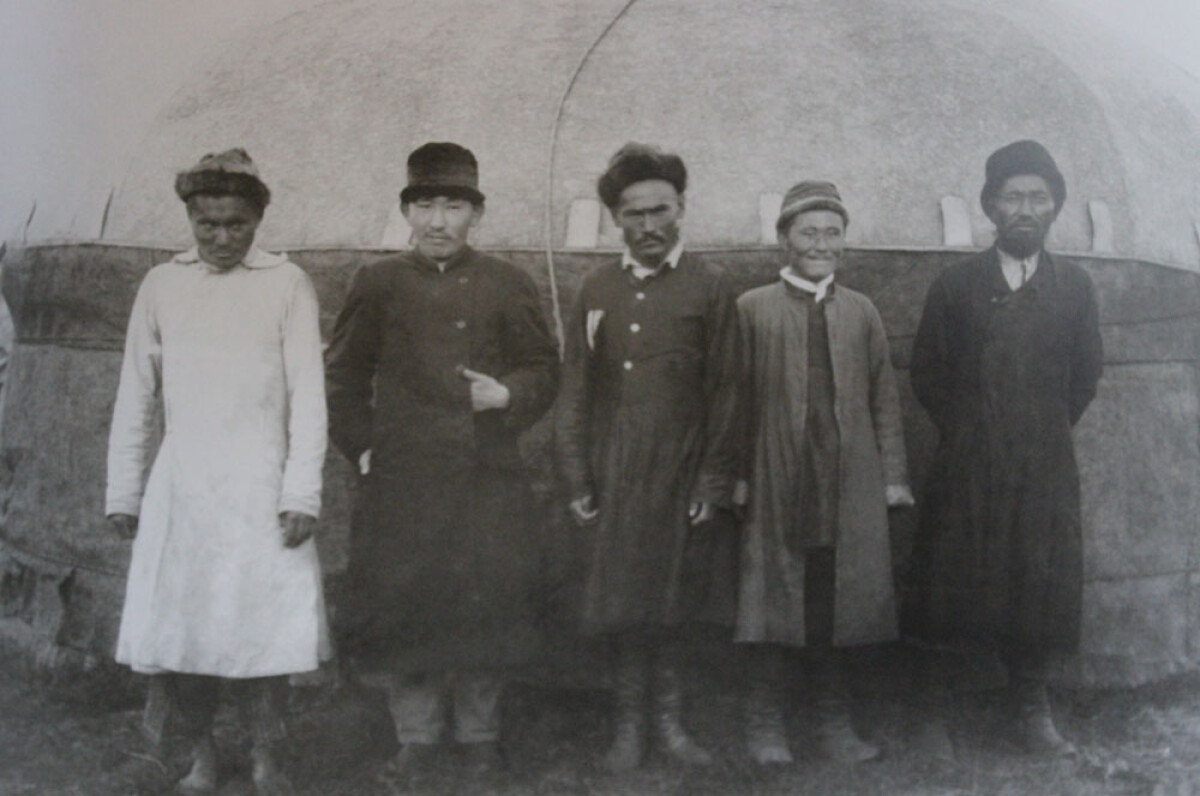 In XIX-XX centuries, men and women’s clothes were very stable and simple on the whole territory of Kazakhstan.

The costume and cut principles remained almost unchanged. Social differences in clothing were primarily evident on the choice of material and in workmanship.

Men’s clothes consisted of an underwear shirt (koilek) and trousers, upper top wear and wide trousers. Upper top wear was worn untucked, tails were closed from left to right. Trousers both lower (dambal) and upper (shalbar) were sewed by the same cut, wide in the step and at the waist, short trouser legs were usually were put into boots. Shalbar was made of camel homespun cloth, leather and chamois leather, since XIX century, it was made of cotton fabric of dark color or bright velvet. Since that time, upper trousers of Russian cut had been spread.

Men wore tight fit short swing clothes (to mid-thigh or knee length) over the shirt. The most common name of the garment is kamzol or beshpent (beshmet). They sewed kamzols from thick cotton fabrics, cotton velvet, woolen fabrics, velvet, silk, with long or short sleeves and sometimes without sleeves. They wore jackets with thick wool or fur backup in cold season. Kamzol was a kind of home clothes, when a man left the village he wore other clothes over it. 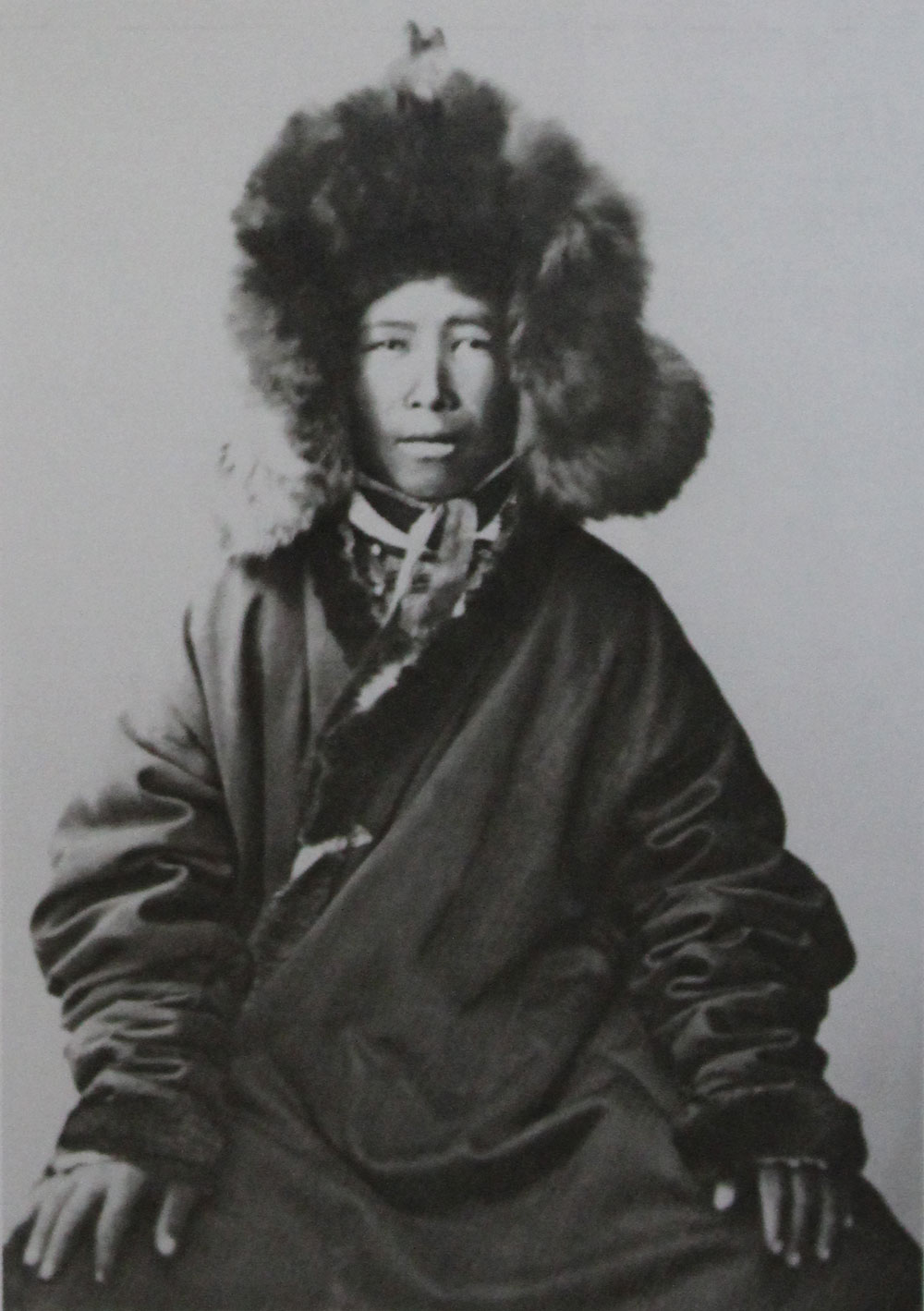 A groom in a wedding suit

The most common and obligatory element of clothing was a wide long dressing gown of straight cut with long and wide sleeves — shapan. The robes were made of a variety of fabrics: sheer and close, sole-colored and colored fabrics. ‘Shapans’ were lagged for warmth-keeping with wool and cotton. Kazakh people wore robes at all seasons of the year. Kazakh men wore several robes in cold weather. Wealth Kazakhs, wishing to lay emphasis on their status wore 2-3 robes even in the warm time of the year and wore the most expensive shapan over them. 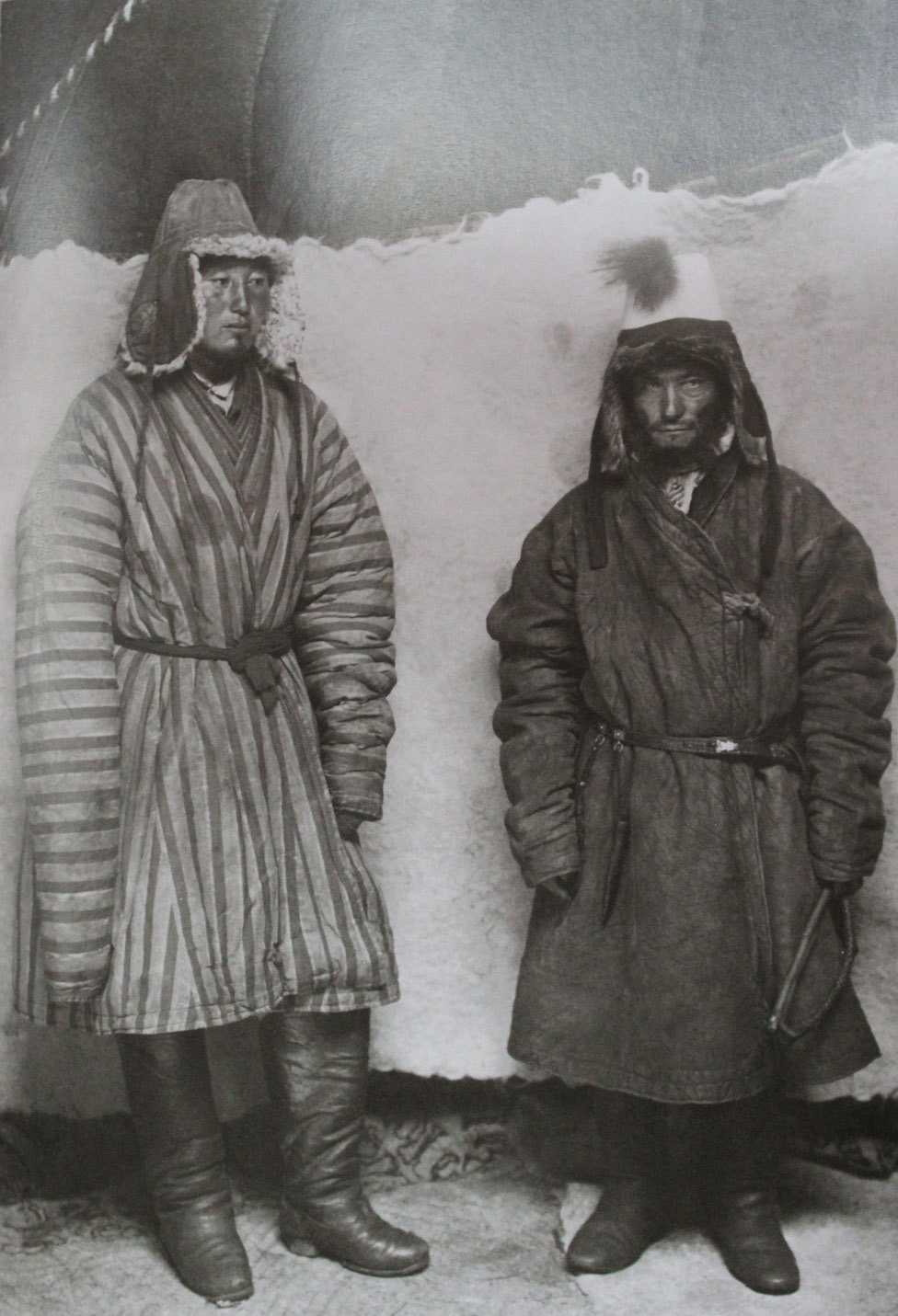 One of the oldest forms of clothing is kupi — a kind of thermal lined outerwear, made of naturally felted wool of sheep of camels. Kupi was sewn with the backing and covered with camel wool or paper tissue.

Ordinary winter clothes were uncovered sheepskin coats — ton. They were sewn of tanned sheepskin with wool inside. Wealthy Kazakh men wore fur coats ‘ishik’ of fine fur. They covered them with woven felt, velvet and satin.

Essential parts of men’s costume were leather belt and fabric waist belt. Leather belts ‘kise’ with handbags (okshantai), sheath and snuff bottle were always decorated with buckles, which were made of iron, brass, copper, sometimes covered with silver, blacken pattern and coining. Such belts were essential accessory of outer clothing of Kazakhs, who were warriors, hunters or cattlemen.

Men always wore headwear, even at home. They usually wore round cloth caps — takiya/kepesh. Until mid-XIX century, Kazakh men wore high tyubeteika with sharp-pointed top, tyubeteika with the flat top made of four triangular wedges or cut in a form of a circle gradually became common. Top hats were made of felt and fur. In summer, Kazakh people wore felt hats (kalpak) and hats with fur, in winter they wore headwear of the special cut (tymak or malakai). Tymak was sewn of crown and four large blades, made from felt and covered with fabric. The blades were done over with fur. 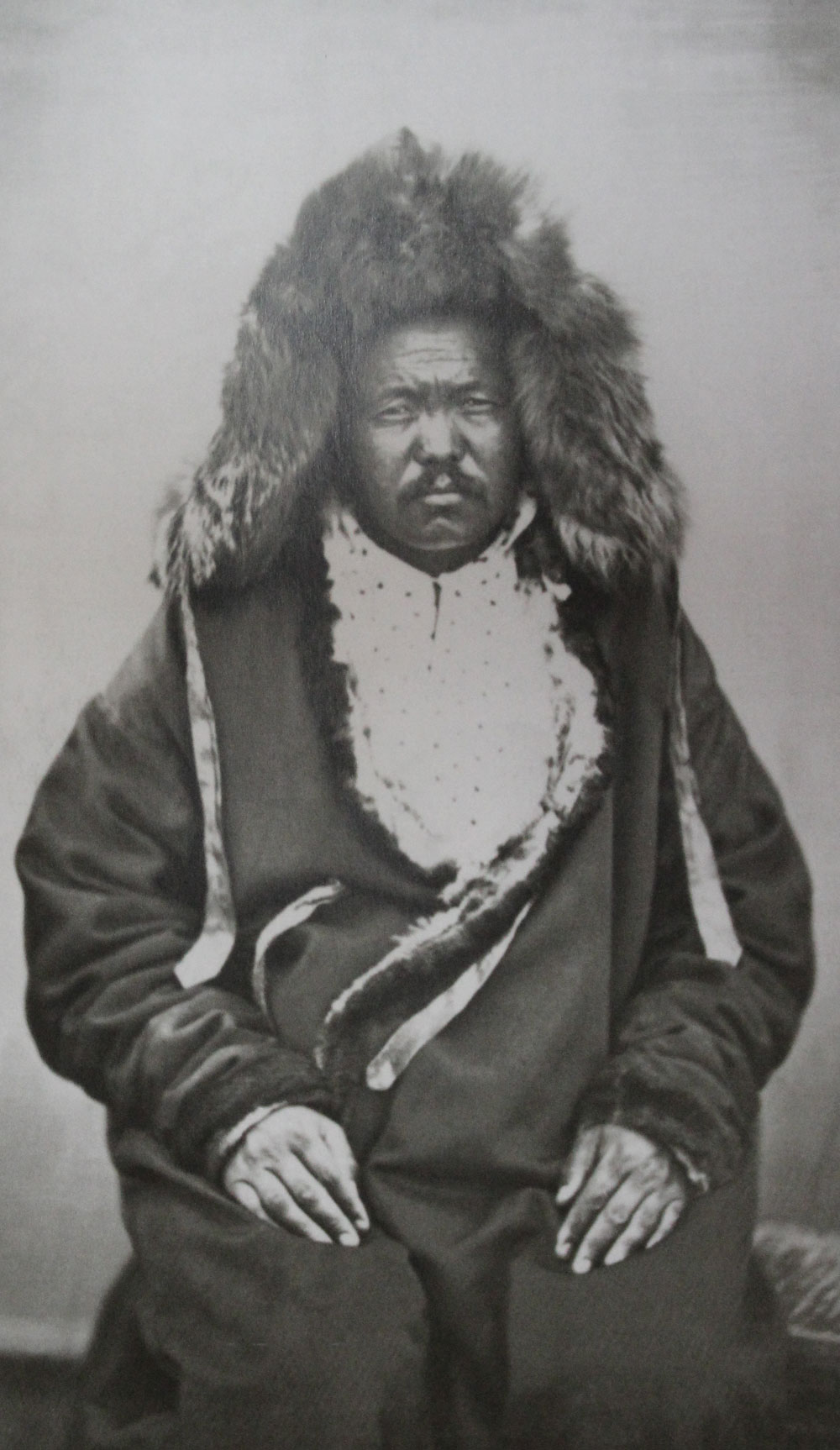 The fox fur cap was the most prestigious. Tymak’s cut had regional peculiarities, it was possible to judge about Kazakh’s generic assignment. 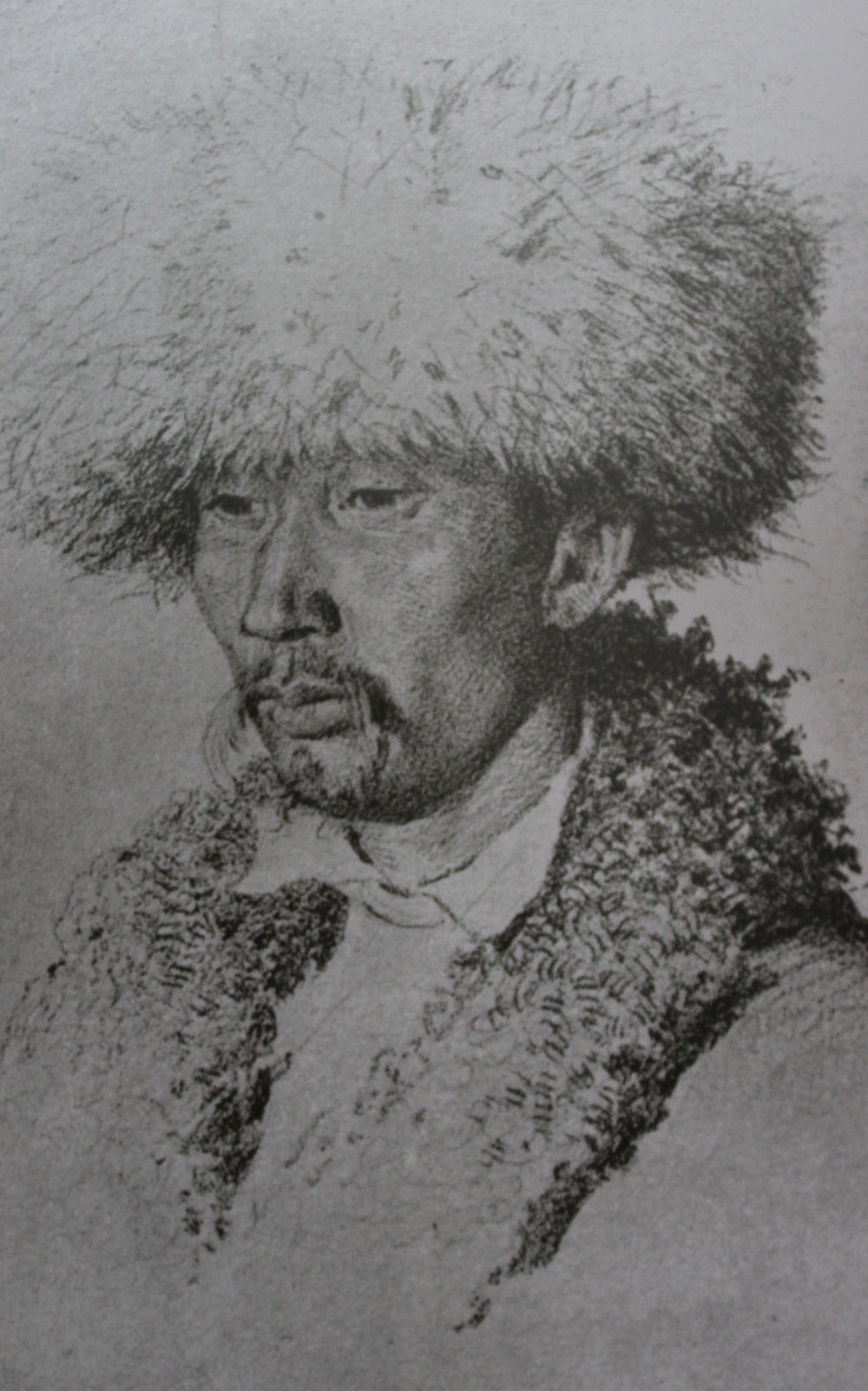 A Kazakh man in national headwear

In XIX century, Kazakh people of the Middle and Junior zhuzes wore the ancient headwear — bashlyk (also names as dalbai, zhalbagai, dalbagai, kulepara) made of camel cloth and other close texture. In XIX century, the most widespread men’s footwear were simple leather boots with rounded toes and low heels, sewed for one shoe, with no difference on left and right. Boots were varied with the seasons. Winter boots were high with wide tops, because they were worn on felt stockings (kiiz baipak).

Kazakh traditional culture in the collections of Kunstkamera — Almaty, 2008.- p.224