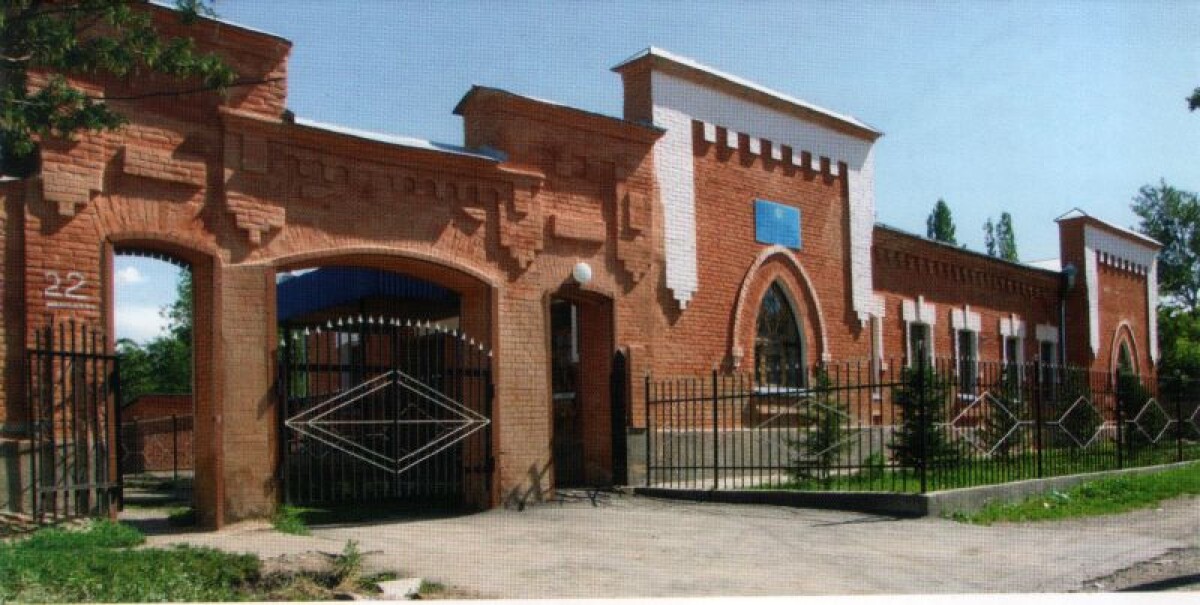 It is impossible to disregard the story about the first Kazakh professional architect, folk craftsman Bayazit Satbayev.

Bayazit Satbayev is called ‘master Bayazit’. We were lucky to get acquainted with amazingly talented architect, who served to people all his life but left without attention.

Bayazit was born in the village Shynkozha of Ayagoz district. His father Satbay Kelshibekov, after graduating from famous Akhmet Riza madrasah in Semipalatinsk, where Abai studied, became mullah. After studying ancient writing from mullah, Bayazit suffered hardships of life after the loss of his father. Later, he was forced to move to relatives on the maternal side. The birthplace of his mother Tushtybaly — Belagash village located near Semipalatinsk. Bayazit worked for Tatar and Russian merchants. He studied the drawings while he was working for Russian merchant P.Ivanov. Starting from simple building elements and improving his skills, he gradually moved to more challenging tasks. 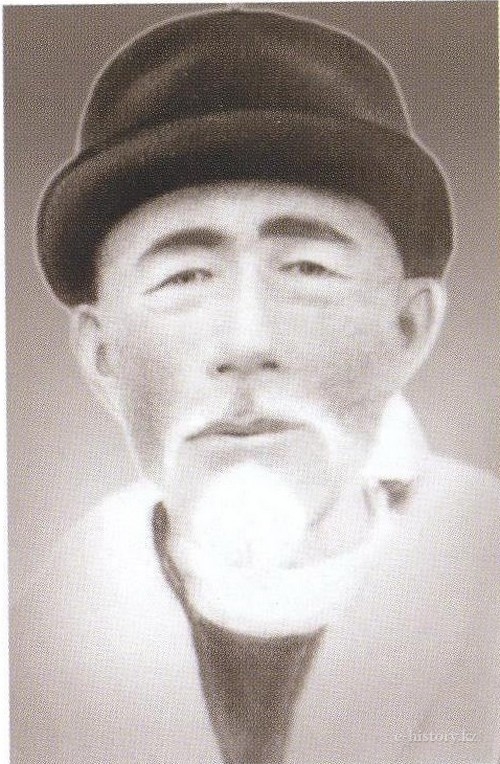 He was invited to his hometown Ayagoz, then to Zaisan for the construction of strategically important objects thanks to his skills and talent. Historical places of the early XX century, merchant houses and shops, office buildings, hotels, city gates and many other wonderful attractions of city Zaisan belong to the great architect Bayazit Satbayev. No doubts, that he personally drew plans of these objects, selected necessary materials, took into account the significance and exterior of the building. Arriving in Zaisan in 1900, he had managed many construction works during 20 years. He built the headquarters of the Cossack troops in 1900-1906, Nicholas Cathedral and military barracks. According to researchers of the architect’s life, he directed almost thirty construction projects. Zaisan mosque, church and S.Manapov’s house are good example of exquisite Russian and Oriental architectural art. The houses built by the order of Tatanov, Bekchentayev, Abilkhanov, Mergenbayev, Yerzin, Toksanbayev, Bobkin have preserved and give special flavor to the city.

‘There is up-to-date information that he built Muslim gymnasium, four-minaret mosque in Chuguchak on Tatar wealthy man Ramazan Chanyshev’s order from Xinjiang in 1915-1917’. ‘A.Baitursynov, M.Dulatov, R.Marsekov arrived in Zaisan and organized the Eastern section of Alash-Orda in the house, built by Bayazit. B.Satbayev walking with the guests through the city showed them Tatar Mosque, Nicholas Cathedral and received their approval in that meeting’, - historian Akhmet Toktabay wrote. 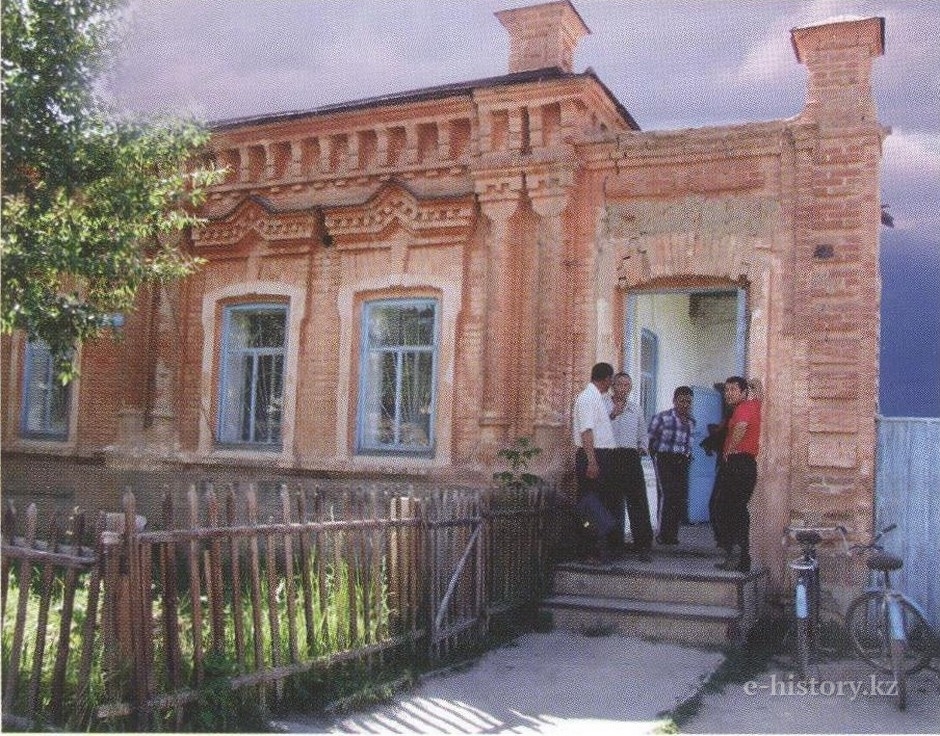 One of the objects of architect’s creative work are gates. These gates are notable for altitude and wide arcuate form. They are built of red brick, even the construction technique for drive way and a small door designed form people, is special. The wooden doors are locked with iron chains.

Let’s consider Zaisan mosque and Zeinulla Butabayuly Mausoleum in details. The building of the mosque, built in 1909 by order of a local merchant Tukhpatulla Bekchentayev, is rectangular, with a height of 5.8m, width of 13.2 to 29.9m. Mihrab (the cube, built in the direction of Kaaba) is located from the west side. Initially, there were two doors; the facade was divided into two balanced tiers. In 1920, minaret of the mosque was destroyed by the Communists, and in 1959, the dome was burned, the building has lost the harmony for these reasons.

A wonderful monument of the architecture — Chilikty mazar. Located in the north-eastern area of Zhalsy village of Tarbagatay district. The funeral construction was built in 1925 above Zeinulla’s grave, who was the son of khoja Butabay’s son. The mazar was built without the ground work, with the technique ‘veiny masonry’ and is revealed to be complex architectural structure. The total length of the dome is 9,4m, width is 5,78m and height is 8,8m. The dome was built of mud brick and burnt outside. 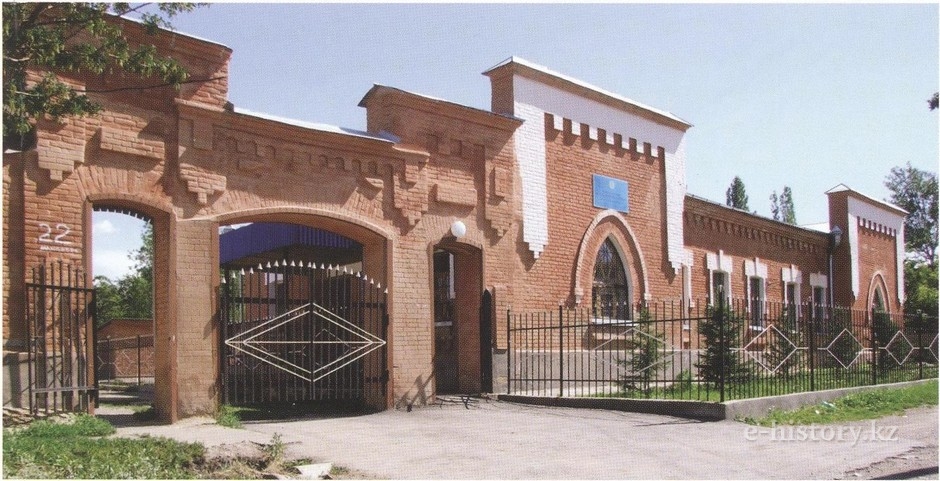 According to the researchers, only two mausoleums, where burnt brick is used in the veneer, Zeinulla Mausoleum and Mukhamedzhan Mausoleum are well-known in East Kazakhstan. The bricks of the dome were made in the master’s own kiln. The bircks were brought from Zaisan to Shilikti in bags by horses and camels. Other information says that the bricks were prepared in Zholshi. In 1980, ‘Kazrestavratsiya’ staff repaired the mausoleum. The repair works were also carried out after the earthquake in 1991. The bricks of different shapes were brought from the brick factory of Turkestan. The shape of these bricks was similar to the bricks of Akhmet Yassawi Mausoleum in Turkestan. 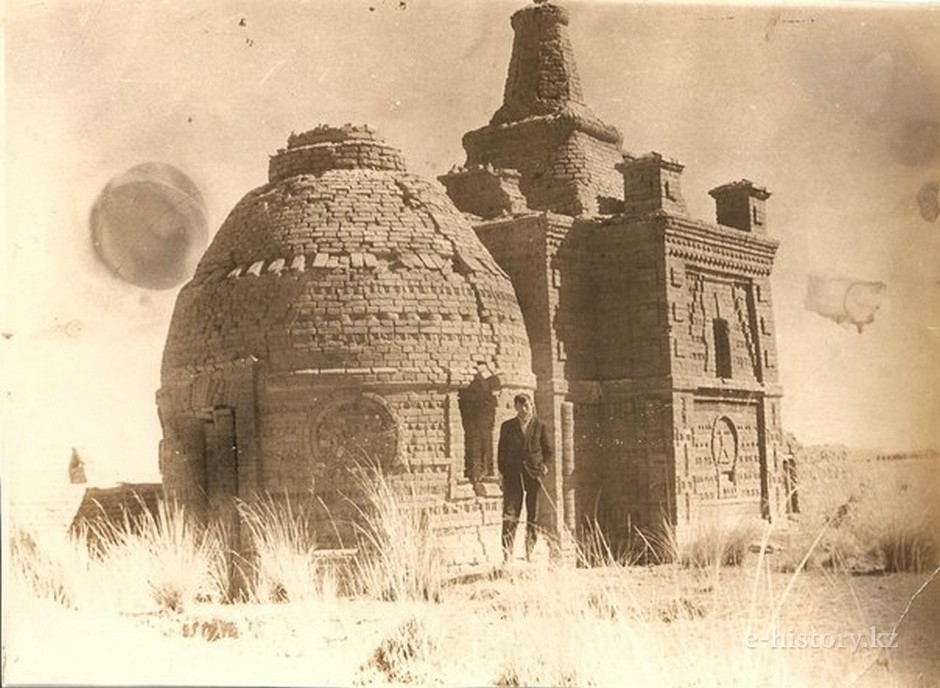 The mausoleum was built of mud brick and faced with baked brick. Its composition is based on the combination of crosswise lower capacity with the complex shape of the tent dome, which had similarities with elements of South-East Asian architecture. The entrance is decorated with arched portal at the level of five arches around the perimeter of mausoleum in the form of shelves and divide the main capacity into two tiers. The window openings of southern and northern of the cross are framed by architrave and their bow-shaped linking block is made in the form of the yurta. 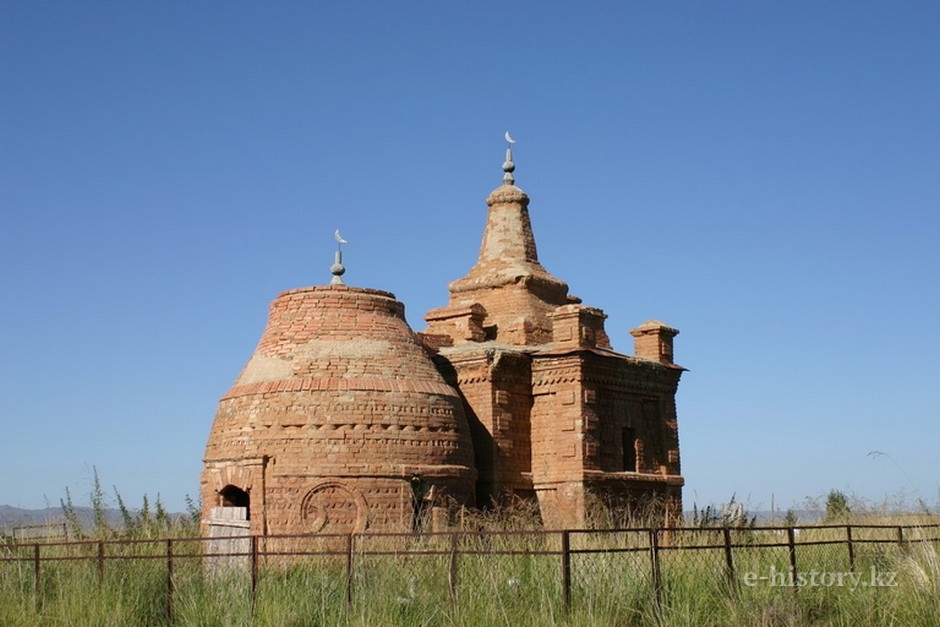 A well-known historian, professor Akhmet Toktabay in his article «Elenbey kelgen enbek» tells the reason of architect’s trip to China from his son’s words. The descendants of khan’s name, who ruled in Zaisan Dair-Kugeday-Zheniskhan, his son Sharipkhan invited Bayazit in Chuguchak in 1933. There he built private memorial complexes, government houses, and became famous thanks to his skills. 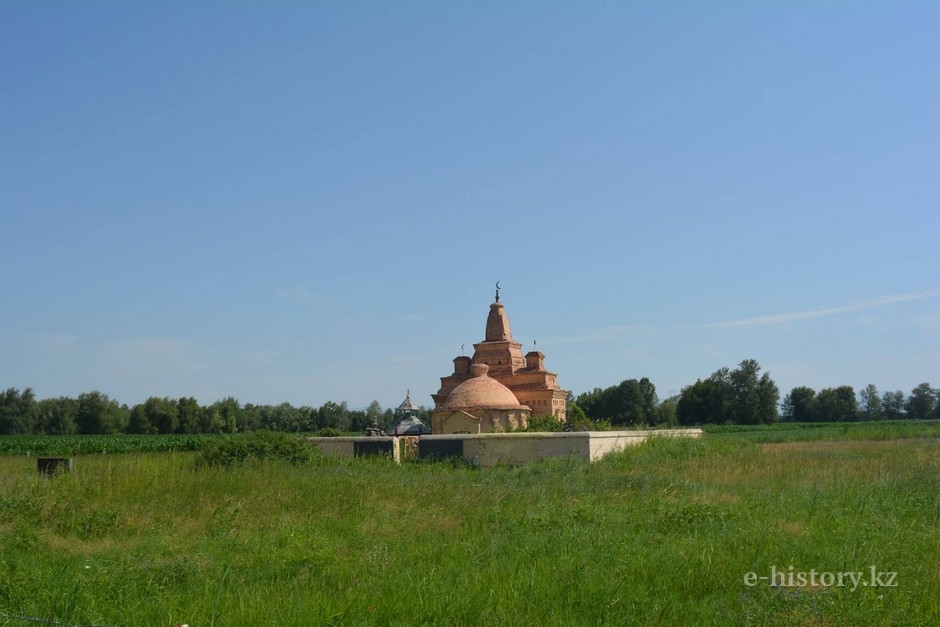 A journalist Murat Almasbekuly visited Omirtay Nashynuly Mausoleum, known as ‘Bikazy’ during the trip to China. According to journalist, Bikazhy headed people at the age of seventeen and ruled them for 70 years. The Mausoleum of the prominent figure is located on the edge of the forest Zhuanterek, along the river Buyrshyn. The maintained complex was built of red brick. 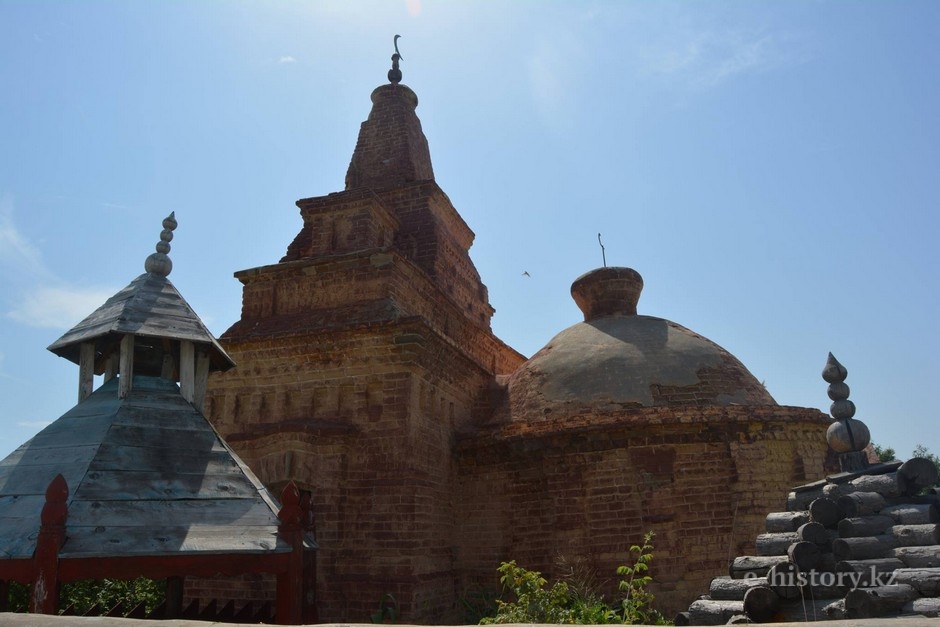 The view from one side of the mausoleum

In addition, Bayazit Satbayev is the author of the mausoleum of famous biy Zhake Koitanuly. This complex was built in Zhake-Lasty of Zhemeney district, on the territory of present Xinjian Uygur region of China. The complex, preserved until 1959, was destroyed by the shepherds, there are only ruins. There is little information about the last years of Bayazit Satbayev. It is known that he died in 1954.