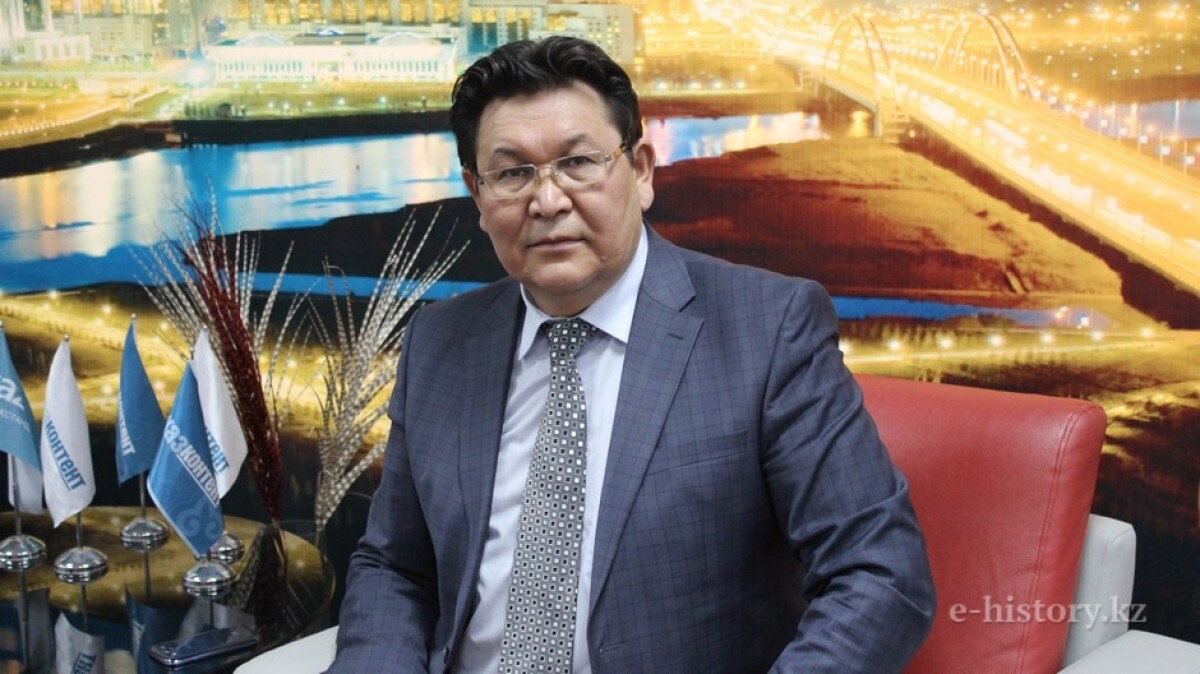 The Kazakhs have these words: "The people with no past has no future". Our nation has a history of 2000 years

- Dear Marat Oralbaevich, our president announced year 2015 the celebration of "550th anniversary of the founding of the Kazakh Khanate". From that day began all sorts of discussion in the media, academic institutions, institutes of higher education, social networks, historians and scientists shared their thoughts. We found the lost and filled the gaps in the historical memory. You are one of the researchers, contributing to the nation's spirituality. 550th anniversary of the Kazakh Khanate is an event that was the dream of our ancestors. Who exactly? Can you make an excursion for us in the history?

- This fall, an independent state, "Kazakh Khanate" founded by Kerey and Zhanibek, will celebrate in a big way, toy in Zhambyl. All the people will be notified. This good initiative of our scientists was supported by Elbasy. The government made a concrete plan. The first steps were made in Astana.

Let’s return to the history, on our open spaces, each in its time, lived Saks, Uisuns, Kanli, Huns, and later Turkic khanate. Genghis Khan made a contribution to our history. Heir of Jochi, the son of Genghis Khan, Batu established the Golden Orda, which became the foundation of our statehood.

The legal heir of the Golden Orda became the Kazakh Khanate. Kerey and Janibek Khans separated from Mogolstan and with 200 thousand population they founded the Kazakh state in Kozybasy. We note the truly great celebration - 550 years on the world historical stage. For five and a half centuries we defeated Dzhungars by deleting their names from the world history. Muhammad Haidar Dulati described those times in "Tarikh-i-Rashidi". How was our state created and through what trials we had to go - is written in this book.

This historical work - our precious heritage. Thanks to it, today we celebrate the 550th anniversary of the Kazakh Khanate. Muhammad Haidar Dulati points date of the foundation of the Kazakh Khanate during 1465-1466. Some scholars do not agree with these data. But we, popularly accepting this fact, based on the work of the great ancestor, contributed the celebration to the state plan.

Until that time, we did not raise the question of the celebration of the Kazakh statehood. The Kazakhs have these words: "The people with no past have no future". Our nation has a history of 2000 years. Yes, we were a country. We had batyrs and sultans, khans and Biy-speakers. Their legal documents, government press, diplomatic materials are stored in the archives of the country. We must be grateful to the ancestors for their efforts and works in the conservation of our land borders.

- On the eve of the celebration there was a need of thorough studies on the Kazakh statehood. The books "History of the Kazakh Khanate foundation", "Kazakh khans" were published. In the Vatican, a map of the Kazakh Khanate was found. In the archives of China more than 150 historical documents were found. And what valuable data are stored in your National Archives? What kind of work do you spend in celebration?

- We have valuable documents, which we brought from Turkey, China, Russia, Iran and Egypt. In the national archives of France, Greece, Spain we were looking for documents relating to the history and figures of Kazakhstan. Special expeditions to these countries were organized. Also, we conducted research works in Italy and at the Vatican. Copies of many interesting documents were brought from the European archives. Europeans have a very positive attitude to the Kazakhs. They know about us. During the First and Second World Wars, lots of the Spaniards, the French remained in captivity on the Kazakh land. Our archive is replete with the materials about them. We help the descendants of the prisoners to find personal affairs of their relatives. For example, the archive contains details about the soldiers of "Blue Division", about 250 French soldiers. They are kept in the public domain. Every person can always use it. Other news:

The correspondence between the rulers of the Ottoman Empire and the Kazakh khans was preserved. These 100 letters we brought from Istanbul. Turkish scientist Ahat Ani Zhandi promised to give us 250 letters of Mustafa Shokai. The main purpose of the archive staff to collect original documents, for this reason, we actively work with the population. People bring us documents, manuscripts. We recently found the manuscript of Shakarim Kudaiberdiev in China. All these works were carried out before the celebration of "550th anniversary of the Kazakh Khanate". Many found manuscripts have not yet reached our country.

- The importance of each document stored in the archive walls, is undeniable. How many people come to the archive, showing their interest in historical, cultural, political, economic documents? What is the number of the researchers leading the work on the Kazakh Khanate? Is the access to the documents opened for them?

- We make sure that the archive is opened to the public. We prepare an electronic version of all funds. There will be an opportunity to familiarize with the necessary documents without leaving your home. The number of researchers increased markedly just before the landmark date. They find the necessary materials easily. All the conditions for working with documents are enabled. We don’t provide only that data to the public, which is not yet declassified.

- Kenesary-Khan, who fought against the 20 Russian generals. The Kazakh Khanate system has a certain tradition or historical trend. I'm talking about the Khans appointment of Genghis Khan. Tell us about the first Kazakh khans - Kerey and Zhanibek. Who else from the Kazakh rulers, can you highlight? For what Khan’s times the people lived their golden age? What Khan was of the strongest influence?

- By the mentioning of the Kazakh Khanate in the mind of every Kazakh names Kerey and Zhanibek should come. They built a state based on ancestral customs. By long tradition, they chose Khan of Genghis Khan dynasty. The younger brother showed his respect and gave the reins of power to his older brother. So Kerey became the first Kazakh khan. The rate of the Kazakh Khan was raised in Kozybasy, in the steppe between Shu and Betpakdala, on the territory of nowadays Zhambyl region. Since the days of the Kazakh Khanate Ulytau, Ordabasy, in Turkestan, are considered sacred lands. Lands that joined the Kazakh people. In those regions expeditions were organized. Special archaeological research works were carried out. Unfortunately, the importance of Kozybasy today are not properly taken into account. The second problem is, when we speak of khans, we mention Abylai, Abulkhair. We try to show the ugly side of some khans. We should not have to rate Khans. On the contrary, we should magnify all of our khans, revealing their strength and power. Thanks to their policy, we have a single state. Alikhan Bokeykhan - the last descendant of the tore, the head of the people. In an open letter of A.Baitursynov and M. Dulatov said: "We both come from Argyn, but according to the Kazakh custom, we must declare our leader representative of the tore". Thus, the leader of Alash was appointed A. Bokeyhanov. Although, Akhmet and Mirzhakyp might also become leaders.

- What is the place of Kenesary Kasymuly in the history of Kazakhstan? Around warlike ancestor with unyielding spirit soars a lot of talk.

- Kenesary – the last Kazakh Khan. He fought with the whole empire. According to historical records, Kenesary Kasymuly opposed 20 Russian generals. This is a great heroism. Great story. It was a time when a great empire defeated Napoleon, and when troops of the Swedish king Charles XII were destroyed. And what Kenesary fought with such an empire - memorable for all subsequent generations of Kazakhs. Just think, our warriors with spears and arrows, left over from their fathers and grandfathers, opposed, armed to the teeth, the Russian army. Let me tell you an interesting story: In the west, it was a Khan - Zhangir. The man who founded Bokey orda, was a Russian general who had close ties with the Russian Empire. So, Zhangir Khan wrote a letter Kenesary: "Kaneke, I am like you - a son of tore, but I have become friends with them, to build the city and the state. I have my own army. Why do not you take this path?", Kenesary Zhangir in response: "Zhangir how can I live in peace, when the Russians desecrate the graves of my ancestors? I know that I will lose. But they will not overcome my spirit. Kazakh spirit is unbeatable". Such are the words of a son worthy of his people. Kenesary died, but to his place came Abay, Shokan, Ybyray, Alikhan, Magzhan, Akhmet. Kazakh indomitable spirit soared again. Clouds dissipated over head of Kazakh. We returned the statehood, secured our borders. Devoted to their homeland leaders, when the Soviet government could securely protect the interests of their people: Seifullin, Shayahmetov, Konaev, Tashenov. The people will come to the time when they could do their own analysis of the leaders who were the best, who could lead his country to prosperity.

- Do not leave Kozybasy without attention. Marat aga, at first the conversation you mentioned the Kozybasy. Why Kozybasy remained unaccounted for? Where is this place? Is it true that this land is located on the border of Zhambyl and Karaganda regions?

- Kozybasy is located on the southern part of Karaganda region. There's a ravine "Andysa", which refers to Bekpakdala. Nearby rises Mount Zhambyl. Mountain Kozybasy behind it. It was there that established the rate of Khan, from there begins the history of the Kazakh statehood. I saw no one make the expedition of Kozybasy.

- The fact that the president decided to celebrate the 550th anniversary of the Kazakh Khanate - the historical event. In this way, we revived our national values, we renewed our history, found a new significant day in the calendar. Celebrate it, we pay tribute to the memory of our ancestors, we are strengthening our state. Let the future generation be proud of the 550-year history of their country.